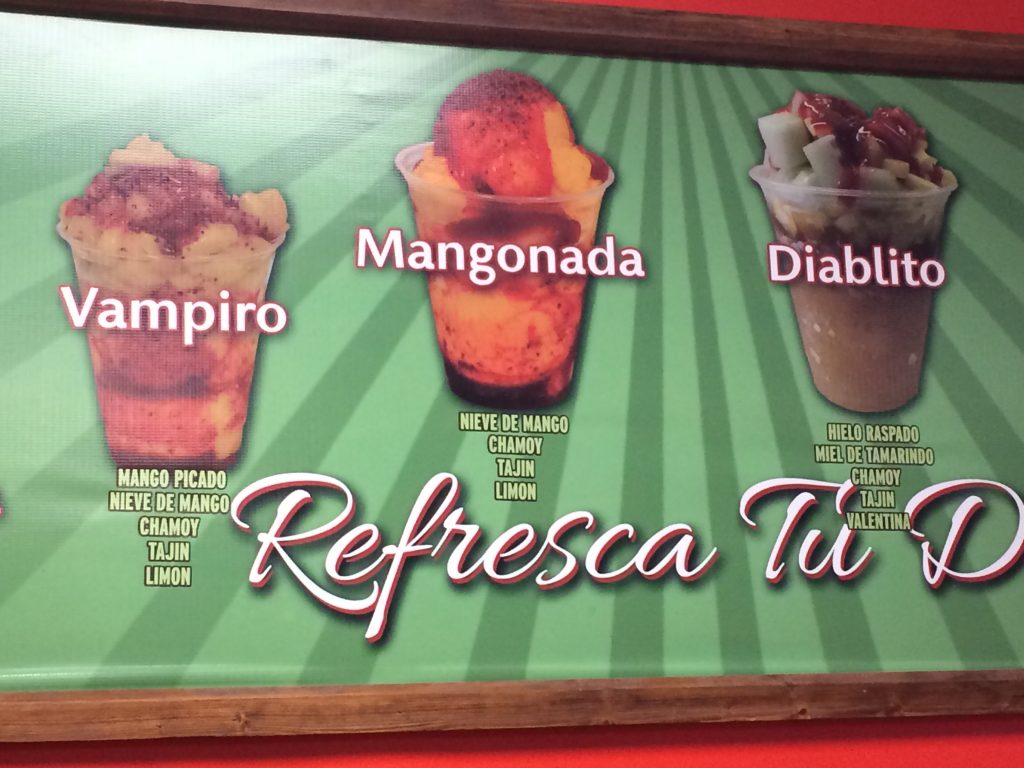 Ever had a mangonada?  Perhaps you know it as mangollada, chamoyada or even its common variants such as the diablito or vampiro.  It’s spicy, salty, and frozen; it’s out there; and we’re guessing it’s something you’ve never heard of, let alone sampled.

In Chicago as well as suburbs like Melrose Park and Cicero, Latino stores are serving up mangonada to the many thousands who love it. We believe, within the next few years, the mangonada will be as talked about in Chicago as Italian beef or Vienna Beef hotdogs. While we have not visited all the mangonada-rias of Chicago, we suspect there are now more of them than there are Italian beef and hotdog joints combined.

The bulk of mangonadas are sold from places that reference in their d/b/a either the Mexican state of Michoacán or its capital, Morelia. According to my friend and expert on these things, RST, Morelia is famous throughout all of Mexico for its ice cream and related treats.  These places—your Flor de Michoacán, your Las Delicias de Morelia—do offer ice creams, and they often include “neveria” or “ice cream parlor” in their signage. 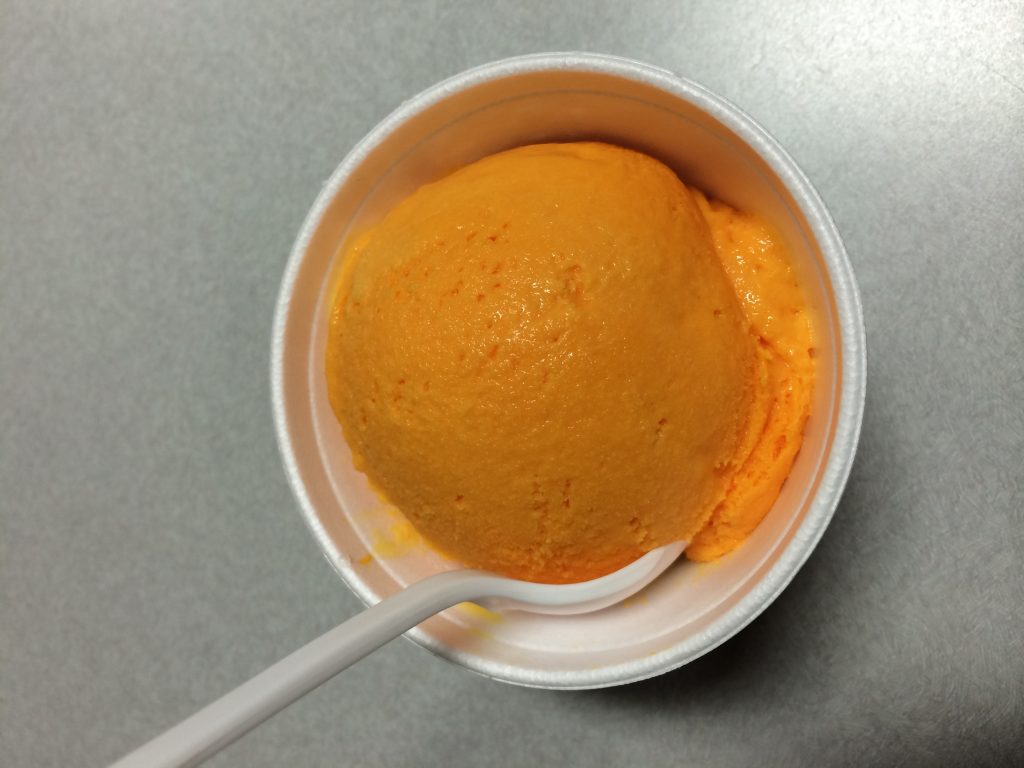 The ice creams will be excellent, amongst the best in Chicago. These homemade confections come in some well-known flavors like vanilla, in a deep dandelion flower yellow, others kinda known, such as cajeta, the Mexican caramel, and some others simply dumbfounding, like chongos zamoranos, based on a Mexican dessert that tastes like tiramisu. While there are often more than thirty-one flavors of ice cream available at these places, most customers are there for the mangonadas.

So what’s a mangonada? Be patient. I will tell you. 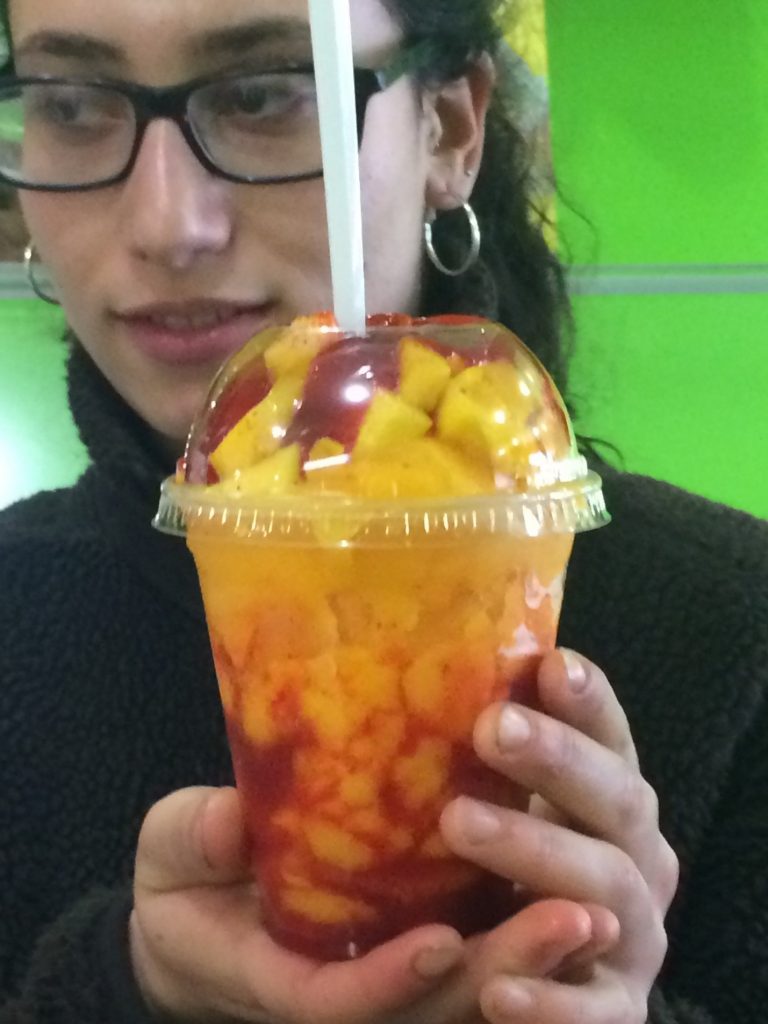 You take a clear plastic cup—and it must be transparent to reveal the composition of orange and red. The cup is coated with chamoy, a Mexican catsup only sourer, sweeter, redder and way spicier than Heinz. Fresh mango is added along with a few good scoops of mango sorbet; even with a small mangonada, you get a lot of mango. More chamoy is swirled in, then more mango, a hard squeeze of lime, and finally, a heavy dusting of Tajin, which is an  intense Mexican chili-salt. Wait, there’s more: the domed plastic lid, of the same ilk Starbucks uses to keep its whipped cream fluffy, gets its own coat of chamoy. If you know Mexican candy, you know the heavy flavor profile that has the taste buds hiding across the four corners of your tongue from too much salt, sugar, heat and sour. On top of that, mangonadas are often served with straws wrapped in tamarind paste and dusted with more chili.  Nonetheless, this is a healthy snack, filled with tropical fruit.

Do not blame us if your order comes back different from what we just described. Across Chicago, there is no consistent nomenclature. To some, the mangonada is a slushy, made with pureed mango pulp. Sometimes it is more watered down. Often, places distinguish between versions like the vampiro, loaded with chunks of fruit, and the diablito, which is more of a chili-water with fruit. The common feature will be mango and the chamoy.

Beyond the mangonada and its variants is a daunting menu of cooling pleasures.  Perhaps the next most popular is the energetico, which comes in the same clear plastic cup, filled with yogurt and topped with granola.  Add fruit to the yogurt, and it becomes a bionico. Replace the yogurt with thick, sweet, Mexican sour cream for frutas con crema. 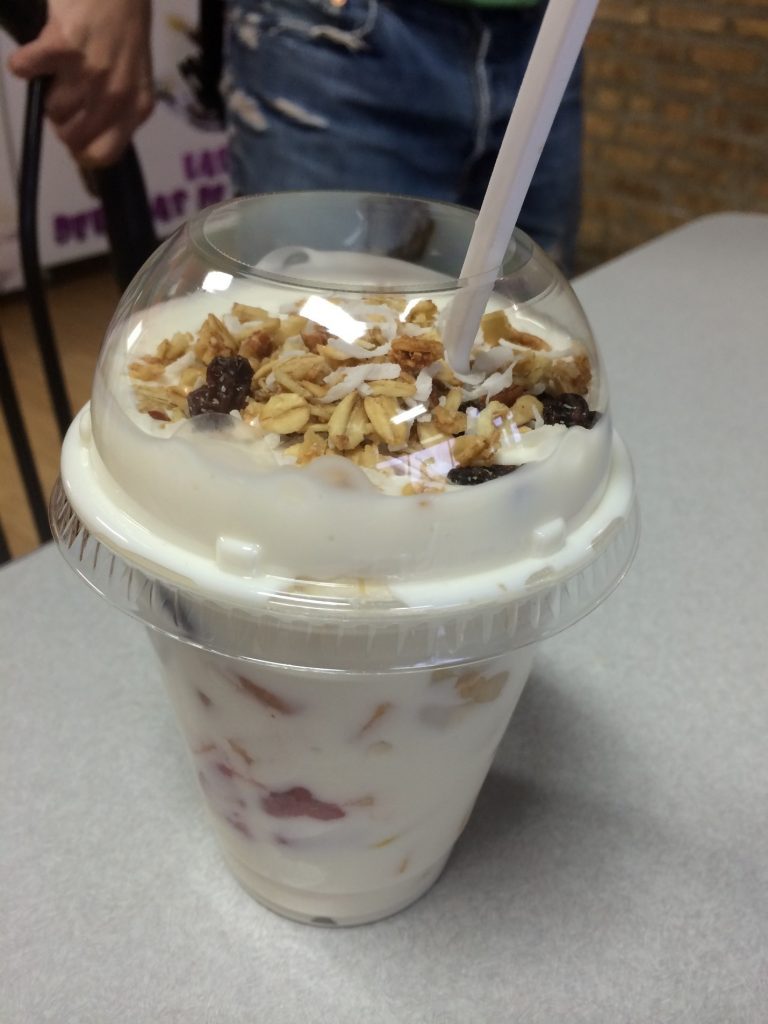 There are also ways with mostly just fruit that add few calories. For instance, gazpacho and pico de gallo are mostly just full of cut produce, bound with lime and chili.

Paletas come de agua or de crema are water- or milk- based; the best-selling ones are con chili, as crazy hot as the mangonadas.

Raspados are shaved ice and syrup. We’ve never found store-bought raspados to be as good as the ones from illicit street sellers who shave from whole blocks of ice.

There are no bad mangonada stands around Chicago, but we know of some that are better than others. Las Delicias de Morelia (4754 West Fullerton) offers all the things we like, including staff willing to offer samples and explain to you what you’re eating. Start there before heading out to try others. Odds are good you will find mangonadas lurking everywhere, all over Chicago.