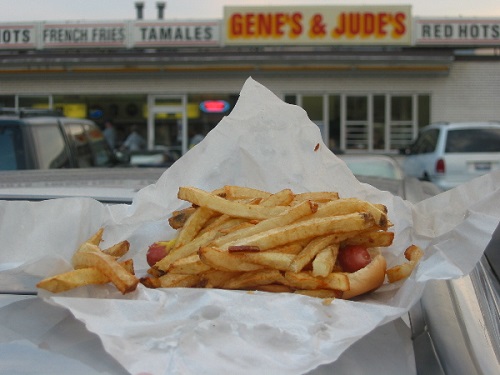 Chicago may still be best known for its humble hot dog, but now the city’s food reputation is undeniably international and there’s no doubt: Chicagoans have an enduring affection and taste for the classics as well as newer food innovations that characterize Michelin three-stars like Alinea and Grace.

“There really is no better place for a museum dedicated to food,” says Suzie Fasulo, director of people and operations at the Foodseum, Chicago’s newest museum slated to open later this month. “We wanted to create a museum for the people of Chicago, but we’re also opening in a very foodie time, where people are drawn to food from a tourism perspective.”

The Foodseum will soon start up as a pop-up at Block 37. The first exhibit, “The Hot Dog and Encased Meat of the World,” is fitting for a city whose primary claim to culinary fame once rested on the humble wiener. Visitors can learn about the hot dog’s history in Chicago and engage with the exhibit by getting hands-on with local butcher shop tools from the 1800s and smelling the familiar spices used in encased meats. “We know people use all of their senses to really understand and connect with things,” says Fasulo, “so the museum is very interactive. We want to engage all of your senses so you can take the inspiration of food and culture with you.”

This connection to culture was important to its founder, Kyle Joseph. Joseph grew up traveling and living around the world, and he was often a foreigner in new communities. “Even when he didn’t know the language, he found food was an amazing way to connect with people,” Fasulo says. Joseph noticed that no matter where in the world he was, families and friends always gathered around a table to share stories and wisdom. Through eating at other people’s tables, he learned the stories and history behind different flavors; upon settling in Chicago, he wanted to share his experience. “It’s always been his dream to share his edible curiosity,” Fasulo says. “He sees food as a celebration to help different people see their similarities.”

Joseph and Fasulo (who happen to be engaged) hosted an event last February at 1871, Chicago’s workspace and community for entrepreneurs, to see if people might be interested in a food museum in Chicago. The Volunteer Kick-Off gave Kyle and Suzie a chance to tell potential donors and volunteers more about their vision. After enthusiastic public response, they went for it. Since then, they’ve hosted a few fundraisers for the museum, including a sausage-making class and a discussion about the evolution of food and family with the Southern Food and Beverage (SoFAB) Institute in New Orleans, an organization dedicated to the celebration of the food and drink of all cultures.

Joseph isn’t a stranger to kick-starting new ideas. He studied electrical engineering and obtained his master’s degree in entrepreneurship and sales. “He really used his combination of running small businesses, the creativity mindset of engineering, and his passion to create this museum,” says Fasulo. One of Joseph’s other ventures, ShopGab, a digital business management tool for personal shoppers housed in 1871, provided a wealth of contacts and experience to draw when developing the exhibits for the Foodseum.

Unlike his other company, though, Foodseum is a nonprofit. Fasulo says the goal is to create an educational nonprofit center to help grow Chicago’s food scene while addressing challenges related to food production and delivery. “We want it to be a place for other food organizations to come together and work on food issues in the city,” she says.

If all goes well at the pop-up location in Block 37 (the historic block that’s been transformed into an urban shopping and dining center in the Loop), the founders hope to have a permanent location with three to four rotating exhibits up and running by 2017. Future exhibits are still in discussion, but Fasulo says they would always have a link to Chicago. “We’d love to focus on specific food types and tie in brands and people working with that food around Chicago,” she says. “It can really be used as a stepping stone to influence people and show them other varieties and adventures in food.” The permanent museum would also have a test kitchen where local chefs can host culinary events and maybe even food festivals.

The Foodseum will be one of the first museums of its kind in the United States. While there are other food museums dedicated to specific topics, such as the National Mustard Museum in Wisconsin or the Jell-O Gallery Museum in New York, multi-disciplinary food museums are rare. “New Orleans has the Museum of Southern Food and Beverage,” Fasulo says, “But the Foodseum will be the first place where there’s a combination of education and inspiration around food.”

“The Hot Dog and Encased Meat of the World” exhibit runs from September 19 through December 20 at Block 37, 108 North State, Wednesday through Saturday from 11am to 7pm; Sunday to 6pm. Admission is free.