While still in high school, Chef Joey Beato of Community Tavern taught himself how to make breakfast food, though not much else. “Breakfast for dinner” was common, and he became a master at omelets. He discovered the kitchen was where he wanted to be. He enrolled at the Cooking and Hospitality Institute of Chicago (now Le Cordon Bleu).

Studies complete, he went straight to work at Quince in Evanston. Right away, the chef “gave me a case of rabbits and a case of beef chuck and was like, ‘Do this.’ And I had no idea what I was doing, but I did that for a month. It was the first thing I did there.” Butchery became one of the first professional skills Beato mastered, helping to develop his skill and respect for meat that would become a cornerstone of the Community Tavern menu.

Beato found his way to The Portage (which has since reopened as the Cochinita Taco Co.), which was exactly where he wanted to be. He got along well with owner Quay Tao and, a year in, Tao began telling Beato about plans for a place near Six Corners that would become Community Tavern.

Portage Park is not a social hub like River North. It’s a neighborhood spot with a whole lot of regulars. “I live upstairs,” says Beato. “The owner lives down the street, and my chef de cuisine lives right next to the owner. We’re all kind of in it.”

The Community Tavern’s location, however, made it difficult to charge the prices he needed for the quality he wanted to serve. The ribeyes and filets they started with were too expensive to maintain on their own. So Beato got resourceful and turned to offcuts ignored by other steakhouses, building up their charcuterie program. 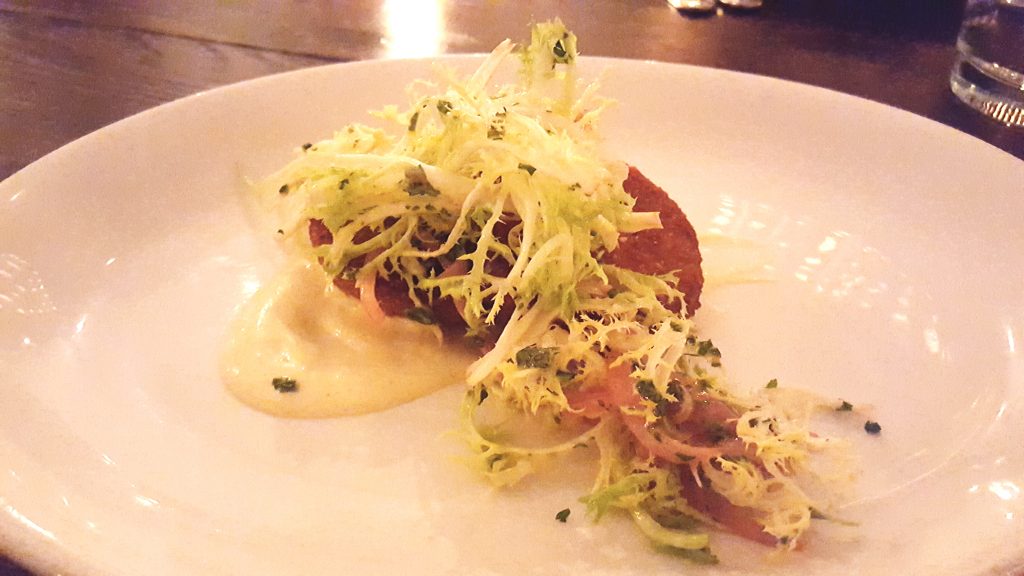 Chef Joey Beato’s favorite dish—Crispy Pig Head Torchon—reflects Community Tavern’s philosophy. The head is braised overnight with feet and shoulder scraps. Once all the meat is picked out, the kitchen shreds and mixes it with the braising liquid, herbs, salt and habanero. They fold in some offal, then roll it all up in pig skin. The torchons hang overnight and are portioned, breaded and fried for the finishing touch.

Served with a Dijon emulsion, frisée salad with Meyer lemon vinaigrette, and pickled onion, the result is a crisp, well-blended dish. The flavors of the pork are at the forefront, simply and beautifully, the rich meatiness enhanced with a hit of spice. The salad and pickles add a brightness that encourages bite after bite.

The crispy pig torchon, says Beato, “is kind of what we’re all about.”

Take it from him; after all, he’s the chef. (Lauren Knight)