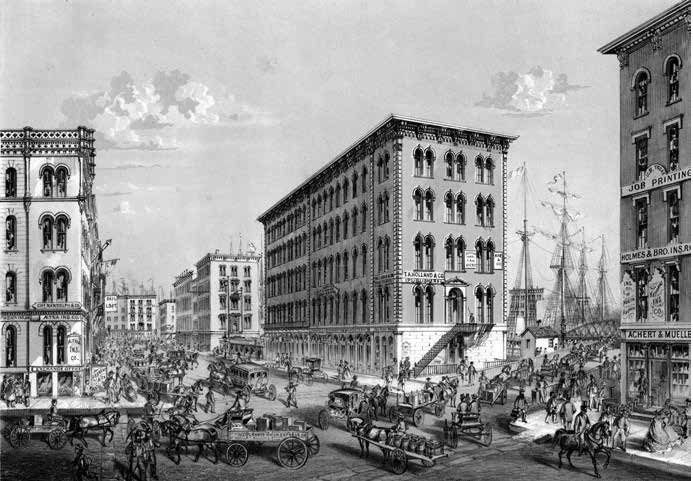 “The beer riot has either been overlooked or underestimated as a turning point in Chicago history.” So says Judy E. Brady, who along with her husband, John F. Hogan, wrote “The Great Chicago Beer Riot” (The History Press, 2015).

Around 160 years ago, at the Clark Street Bridge, angry bands of beer lovers, outraged at Mayor Levi Boone’s prohibition on Sunday beer sales, and seeking to help free jailed bartenders who continued to pour the stuff, went to war, resulting in one death, nineteen injuries and sixty arrests. But this was more than a battle between beer lovers and temperance advocates: it was a confluence of many social forces, including the emancipation of slaves, women’s rights… and beer.

It’s April 21, 1855. I’m standing on the Clark Street Bridge. What do I see?
Hogan: You would have seen separate mobs of angry men headed toward the courthouse, armed with muskets, pistols, meat cleavers and other weapons. The first gang of about 200 was subdued. Following a retreat back across the bridge, a second wave re-formed and increased to approximately 500. These marchers, similarly armed, were intent on engaging the police who surrounded the courthouse and the jail that held liquor-law violators the mob had come to free.

Why was beer so important to German immigrants to Chicago?
Hogan: Beer has been a centerpiece of German culture since time immemorial. The beer hall was more than a place to down a few. It was a community gathering spot that welcomed families and people of all ages, a place to meet friends, exchange news, read German-language newspapers, sing, dance, listen to music and perhaps hit up the proprietor for a few dollars until payday. In warmer weather, there were the beer gardens.

What was the connection between slavery/anti-slavery and alcohol?
Brady: During the nineteenth century, the convergence of three causes—temperance, emancipation and women’s rights—would divide and dominate American thought for years to come. Many Americans supported all three, believing them to be inextricably linked. For example, some emancipation advocates, Frederick Douglass foremost, regarded drink as another form of slavery. Douglass crusaded against alcohol almost as fervently as he did against slavery. Women’s rights supporters sought to protect families from the poverty and violence caused by a drunken husband or father. Douglass was believed to be the only black among the forty or so men who attended the first women’s rights convention in the United States, held in Seneca Falls, New York, in 1848. The organizers, Elizabeth Cady Stanton and Lucretia Mott, had deep roots in the temperance movement and henceforth directed their considerable skills and passion to work simultaneously for temperance, emancipation and women’s suffrage.  Their temperance activities were instrumental in causing several eastern states to adopt prohibition laws.

Besides beer, what was the great Chicago beer riot about?
Hogan: The riot was about beer, of course, but it also represented a release of tensions that had been building for years. Since its earliest days, Chicago had been governed and largely owned by old-line Yankee stock that traced its origins back to the Puritans, those folks whose greatest fear was said to have been that someone, somewhere, was having a good time. These stern people became increasingly alarmed over the growing influx of immigrants, particularly German and Irish, whom they treated as second-class citizens. The newcomers drank, often to excess. They were loud, uncouth. Nearly all the Irish and many of the Germans were Catholic, subjects of a foreign pope. Some of the Germans had been revolutionaries. All of them needed to be suppressed. Who knew what mischief they might be plotting in their saloons? Mayor Boone’s Sunday-closing ordinance constituted a type of backlash. The beer riot was a counter-backlash.

Your book’s subtitle is “How Lager Struck a Blow for Liberty.” How did lager do that?
Brady: Lager, and the opportunity of the workingman to consume it on his only day off, represented the catalyst of an immigrants’ rights movement. Beyond the immediate repeal of the Sunday-closing law, other steps toward a freer society began to occur. The oppressive Boone administration was finished after a single one-year term. Concurrently, his national political affiliation, the harshly anti-immigrant, anti-Catholic Know Nothing Party, began a swift decline toward oblivion. The new Republican Party, led locally by Mayor John Wentworth, helped secure the presidency for the greatest American liberator before or since, Abraham Lincoln, who was nominated in Chicago.

Photos reprinted with permission from “The Great Chicago Beer Riot” by John F. Hogan and Judy E. Brady. Available from the publisher online at arcadiapublishing.com or by calling (888)313-2665.