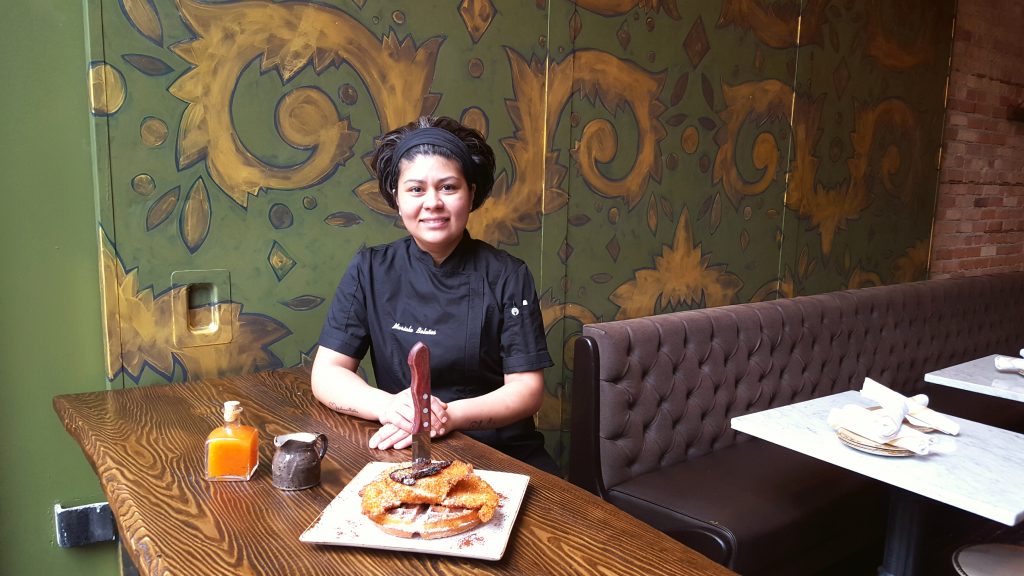 Need a recommendation when scanning the menu at MAD Social (1140 West Madison)? Take a hint from executive chef Mariela Bolaños.

Bolaños came to the kitchen on a whim. When she was eighteen, a commercial for the Illinois Institute of Art in Chicago piqued her interest. The scenes of culinary students looked interesting and fun. Her parents encouraged her to go check the school out. “’It might stick,’” she recalls them saying. They were right.

Following her studies, Bolaños began working at Viand Bar & Kitchen under chef Steve Chiappetti. She started as a pantry cook, moved through roles in catering, as a supervisor, then as sous chef. Ultimately, she took over from Chiappetti as executive chef. She credits Chiappetti as a mentor, embracing many of his methods and ideas.

After Viand’s closure, Bolaños found herself bored by her next couple of jobs. “Here’s your menu, here are your recipes, this is what it needs to look like, go—I don’t like working like that,” she says of the style of those kitchens. When she found an ad for a new restaurant looking for a chef who could make “global fusion” cuisine, Bolaños reached out.

The ad was for MAD Social, the new concept from Phil Stefani Signature Restaurants. Bolaños sat down for an interview with corporate executive chef Joe Roireau, which led to a tasting for Gina Stefani. Four hours and eight dishes later, she got the job.

At MAD Social, Bolaños found a place to really flex her creativity on the plate. A lover of drawing and photography, she relishes applying that to her food. “I can utilize a lot of the talents, merging so many things together. All that creativity—you can do that as a chef,” she says. She always pushes herself to try new methods and flavors, mastering one and moving on to the next. Often she will find inspiration from research and trends on social media. “There’s always new ways of cooking coming out,” she says.

Her Chicken & Waffles has been a big hit and for good reason. The cinnamon-sugar-dusted churro waffle is the star, crispy on the outside and perfectly soft on the inside. “It took me a while to perfect the waffle,” Bolaños explains. “It’s not just a waffle you take out of a machine and throw onto a plate.” She and her cooks went through a lot of experimentation, altering recipes and cooking methods until they got it just right.

Topped with a panko-crusted chicken Milanese, deliciously charred pork belly, maple syrup and Bolaños’ housemade MAD hot sauce, this dish will keep your fork busy until the plate is cleared.

You won’t either. (Lauren Knight)