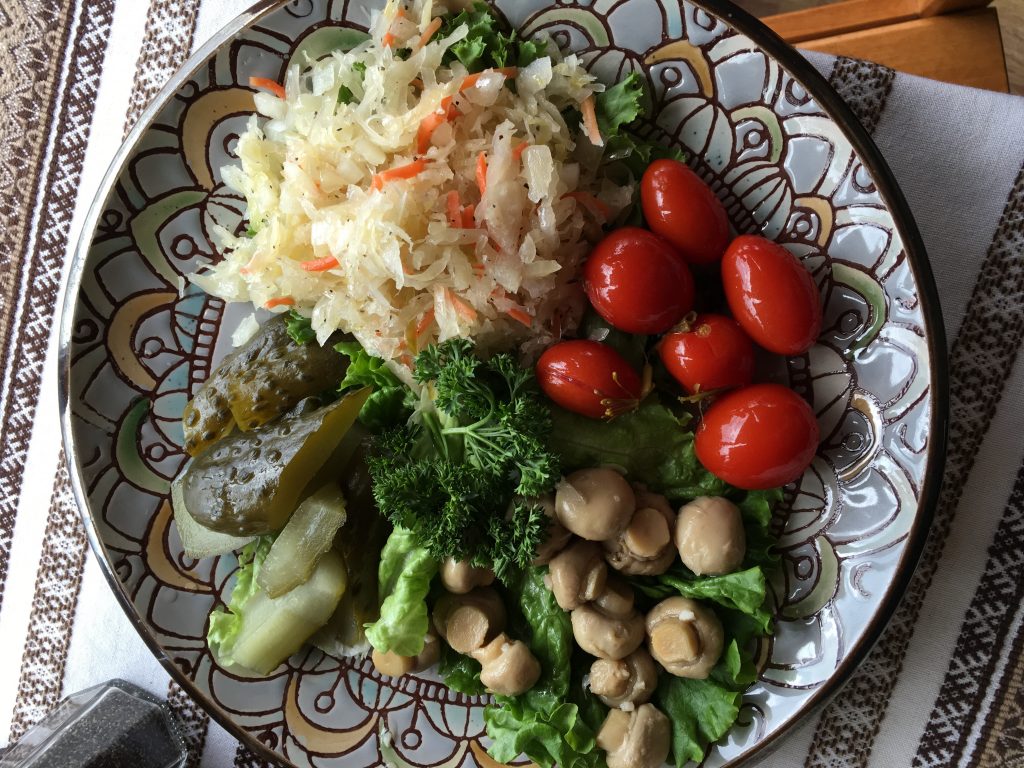 If I want to eat Ukrainian food, I want the real stuff, where the vegetables come pickled, the cucumbers are so sour my cheeks involuntarily suck in and the grape tomatoes taste like the last vestiges of summer. But the mushrooms are quite the opposite. They are a laboratorial taste (it must be acquired). What else makes this place authentic? They serve it in jugs. It makes sense, yes, that a restaurant called Magic Jug (6354 West Irving Park) serves a lot of its menu in jugs.

Up until a year or so ago, I didn’t know where to go for real-deal Ukrainian food in Chicago.

I used to go to New York City, to their East Village, for Ukrainian food. I knew the food was not true to traditions because the borscht came with challah and the eggs with kielbasa. I loved B&H and Kiev and these other very New York institutions that felt like canteens for the Wobblies and mish-moshed all the Slavic cuisines with a healthy dose of Ashkenazim but also put burgers and spaghetti on their menus. Yes, these places were Noo Yawk, down to the black-and-white cookie you got on your way out. We have nothing of this sort in Chicago. Certainly, nothing of this sort exists in Ukrainian Village, where the lone remaining Ukrainian restaurant serves food from steam tables.

On our first visit to Magic Jug, we learned of their kiln-fired dishes. Take pelmeni. These small meat-stuffed dumplings are said to be Siberian. Get an order, nine or eighteen. The pelmeni arrive at the table in a ceramic jug. I believe that’s what it takes to make them Ukrainian.

There is an item at Magic Jug, pechenia, said to be Ukraine’s national dish. It’s called a Hungarian Pancake, and it’s much like a dish served in many of Chicago’s Polish restaurants. This is, of course, something not especially Hungarian (so I’m told): a Hungarian pancake is a pork stew stuffed inside a potato pancake. At Magic Jug, the pechenia comes in a jug (of course!), where the potato pancake snugly nests on the bottom, the pork stew sitting over the top. Magic Jug seasons their stew heavily with garlic. I’ve decided that all traditional Ukrainian food must be garlic-forward as well as coming in jugs. Get the pechenia.

There is something on the menu, I confess, that I have not tried; it’s nalysnyky with House Recipe Meat.  There are other things I have tried to figure out. I know now that the word “blintz” means nothing, but nalysnyky can come sweet with farmer’s cheese or savory with meat, and either can be had as lunch.

There are extra challenges in approaching such a place because the food comes written first in different letters. They are offering us translations and transliterations. On the menu you’ll see “galushky.” Mostly, on the Internet, these white, half-spheres of potato dumplings doused in butter are spelled “halushky” or “halusky” because that’s how it’s said. Get them too, because they are lighter than they look.

I often approach my meals at Magic Jug by making my own all-you-can-eat buffet. If it’s a smaller party, then we order less varenyky, what you may otherwise think of as pierogi. The golubtsi is literally a stuffed cabbage roll, priced and sized so you can keep on getting. The singular roll comes un-sauced, so you have more room for sour cream or smetana, much more prevalent than garlic as a condiment here. Get the cheburek, always the size and shape of a folded bandana; fried, flakey and filled with more meat. The colors on the table come, if not from the platters of seasonal vegetables, then in bowls of bright red beet soup or other soups dusted liberally with green dill.

Magic Jug did recently adjust their menu, easing things up for people not versed in Ukrainian cuisine.  There is their version of price fixe. One option gives you a bowl of chicken soup and meat blintz; another a bowl of borscht with a mixed plate of a minced pork patty, mashed potatoes and pickled cabbage. And no, an extra helping of the pickled cabbage is not a bad thing. These combinations may be the time-honored way, but last time I was there, we mixed and matched soups anyway.

In this era of Top Chefs serving Chinese food and kimchi getting splayed on anything, it’s hard to know when you are getting the real thing. What if when you follow the pin for Magic Jug on Instagram and all the comments are written in Cyrillic: does that not let you know that you should venture away from Ukie Village for traditional Ukrainian food?