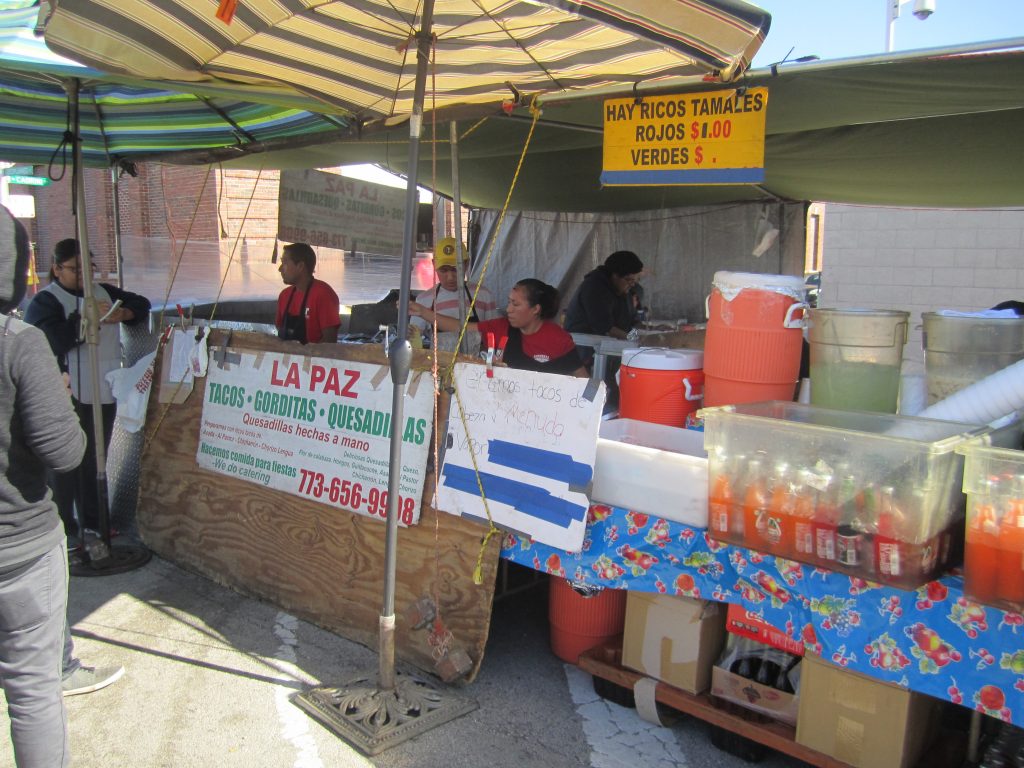 One of many tamale stands at Maxwell Street Market/Photo: David Hammond

Four Belly (3227 North Clark) announces on its signage that it serves “Asian street food.” There’s JJ Thai Street Food (1715 West Chicago) whose very name suggests the genesis of its cuisine and the newly opened Immm Rice and Beyond (4949 North Broadway) explains on its site, “we serve foods found at food stalls and carts in the streets of Thailand.”

Jarabe Mexican Street Food (2255 West Taylor) might face some competition from Lola Brasa in the Kimpton Hotel (39 South LaSalle), which Crain’s tells us will focus on Latin American street fare, though neither serves food on the street.

The only place in Chicago you can find street food—aside from random food carts and trucks which are in another category—is at the Maxwell Street Market where you will still discover, every Sunday morning, a tent city of small, family vendors offering up the food of their heritage.

The claim of “street food” on restaurant signage and menus is many times code for “authentic,” a term that as previously noted is highly problematic and usually baloney.

We recently had a beautiful meal at Immm, so we’re not saying that this fine place and other restaurants serving what they call “street food” are not doing a good job of dishing up tasty vittles. However, there are crucial reasons why street food—food actually served on a street—is many times more satisfying than food served in a restaurant, even if that restaurant is serving the kind of food you’d likely see on the street.

Value. With no overhead and a competitive marketplace, street vendors offer tremendous value for the dining dollar. This seems beyond dispute. 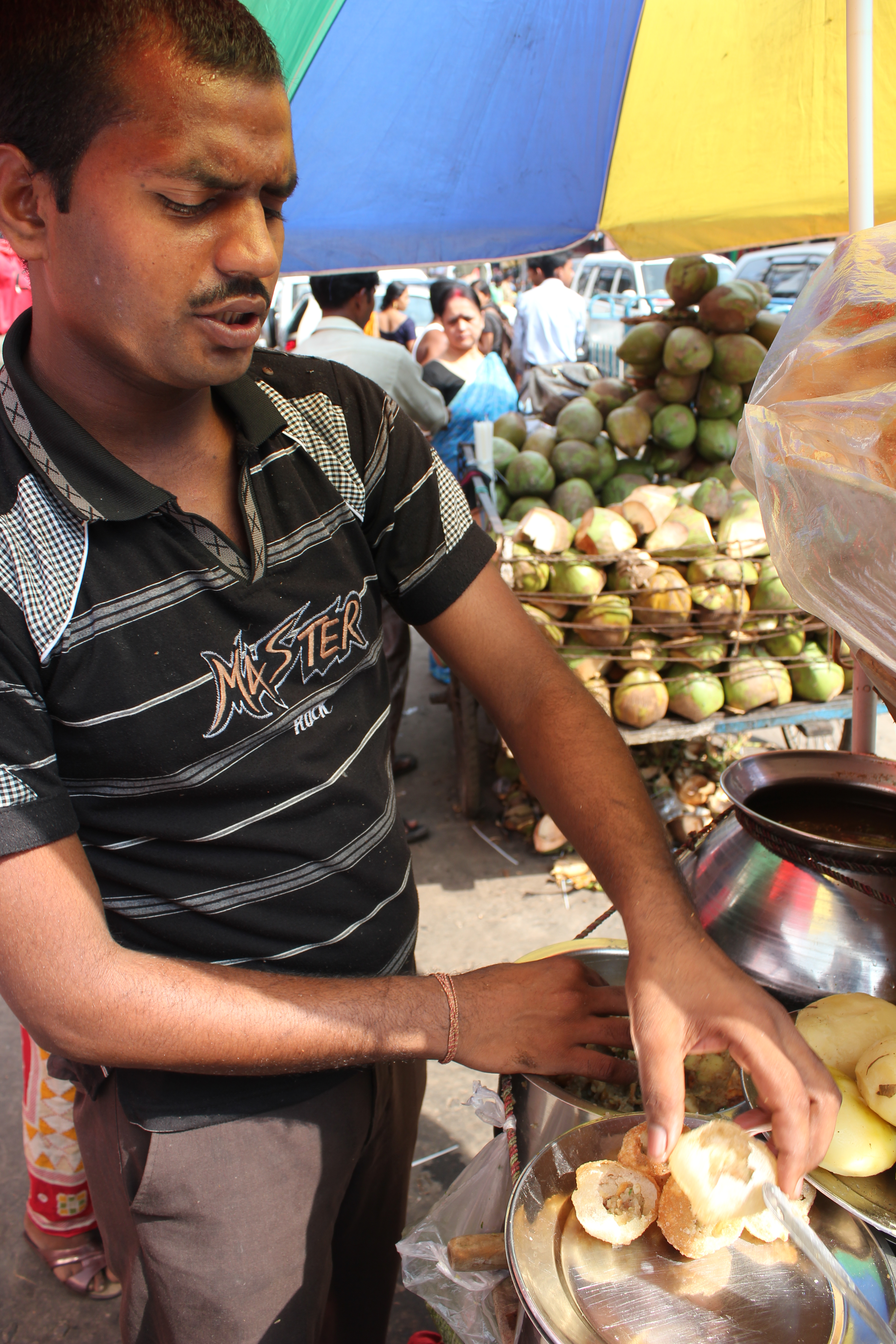 See, eat, happiness. When you sit down in a restaurant, you look at a menu and figure out what sounds good. With street food, you can look around and eat whatever looks good. There’s never the disappointment that comes from ordering something that seems delicious based on the menu description only to discover, when it arrives, that your imagination outstripped reality. We eat first with the eyes.

Focus. Street vendors frequently serve just one thing. This tight focus makes it possible for those who sell on the street to perfect their offerings in ways more difficult to achieve in restaurants. Specialization leads to excellence.

Feedback. Street vendors notice how people are enjoying their food. If something is off, it’s tweaked and fixed. Unmediated feedback gives street vendors an opportunity to take input, make changes and refine an offering until it’s as good as it can possibly be.

Collective wisdom. Outside the United States, in places like Thailand and Mexico, street food is frequently offered in areas where vendors serve up exactly the same thing. This lack of originality—or “market differentiation”—is actually a strength. Because street vendors can easily see and sample competitive offerings, they learn from each other and collectively move forward, improving their food over time.

Democratic. Street food brings people together—the homeless and the one percent—to share the same food on the same street at the same time. In New York, you’ll see street people eating Sabrett hot dogs alongside Wall Street traders. That kind of juxtaposition of social classes would almost never happen in a restaurant. On the street, transcending class distinctions to eat together is the norm, and everyone seems to be having a good time in the democratizing space created around a curbside vendor.

Data density. You learn a lot about a culture and its food, fast, when you eat on the street. As my friend Ronnie Kaplan puts it, “Having just returned from Paris, where I ate a few meals at Michelin-starred restaurants, there is a mild sense of frustration with how long some of these meals can take. Believe me when I say that I’m not complaining but as great as these meals can be, the time-to-knowledge ratio is fairly high. On the street, the opposite is generally true. Stop, grab a bite, learn a little something—about the food, the people who prepare it and the people who consume it—and move on to the next bites/lessons, wherever they may be.” Brilliant.

Tradition. When I want regional chow that reflects a unique place and the people who live there, I go to the street. That’s where I find the food of the average person, made in historically sanctioned styles that are likely to reflect regional characteristics.

There are, of course, dangers with eating street food. My daughter is traveling through Southeast Asia right now and was laid up for a day or so after eating street food in Myanmar. It was, as she describes it, “noodles in sauce that came out of a bucket that was covered with a rag. I was very hungry; I ate it.” Kid is daring, you have to give her that, and admittedly, street vendors may not always comply with high American standards of hygiene. And that’s why, lover of street food that I am, I always carry in my backpack a bottle of Cipro, the nuclear option of antibiotics; I’ve never had to use it. 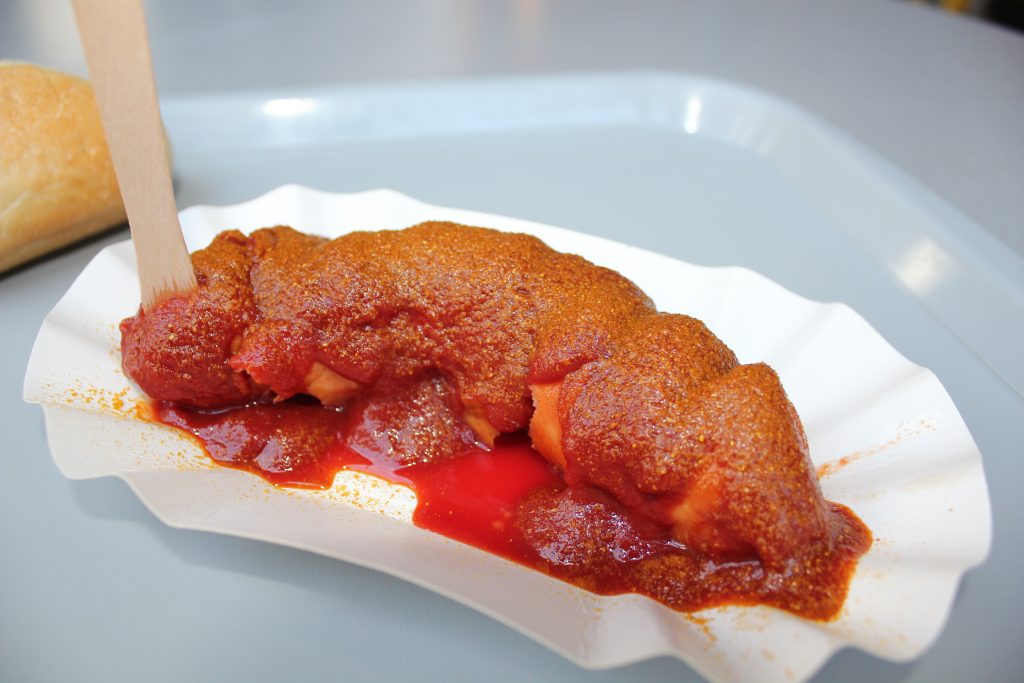 Currywurst in Berlin, one of Germany’s most revered street foods/Photo: David Hammond