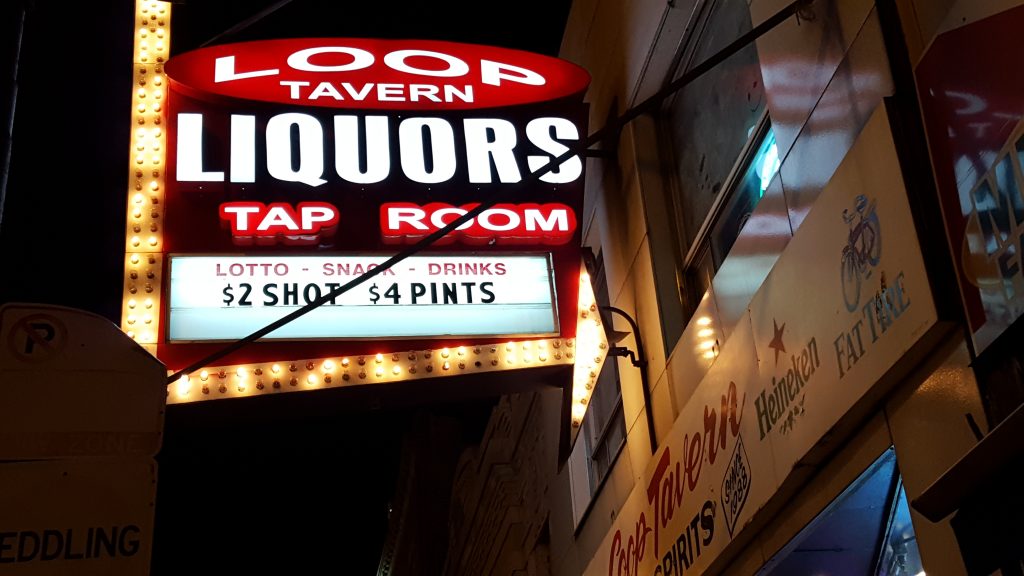 Everyone knows what an “old-man bar” is. Even if you’ve never set foot in one, you can picture it in your mind: dimly lit, simple furnishings, packed with blue-collar workers unwinding after their day. That pack of drinkers, however, probably does not include a thirty-year-old woman throwing back a beer. I’ll be the first to admit, my scene tends to be craftier: craft beers, craft cocktails, crafty décor. Old-man bars have piqued my interest now and then with their gritty, uncomplicated allure, but I haven’t spent much time in them. On a Tuesday evening, however, I was feeling tired from work, craving a beer and minimal social interaction. It seemed like the perfect circumstances in which to check out one of these old-man bars. My sister and I had often wandered past Loop Liquors, shooting a curious look into windows filled with posters and neon. I had even stopped in once before to grab a six-pack from the liquor-store component of the place. I had not ventured into the bar in the back.

My initial reaction to the marquee in front was pretty typical for my demographic: “$4 pints! What an awesome deal!” Accompanied by my sister, who didn’t want to miss a chance to check out Loop Liquors for herself, I walked through the store and straight to the back. We grabbed stools at the long bar and immediately ordered pints: a Half Acre Daisy Cutter for her and a Revolution Anti Hero for me.

Those glasses stood out starkly against the bottles in front of the other patrons. Clearly no one else was jazzed about the excellent prices on local brews. Big-batch domestics and Mexican imports were the popular choice, here and there accompanied by a shot of whiskey.

Our choice of beverage wasn’t the only thing that set us apart from the rest of the customers. The only other woman in the place was the bartender. She handled things quietly, stopping every so often to listen to one of the men talk about their wives or the course of their day.

Otherwise, it was absolutely a male-dominated establishment. Middle-aged men, some a little older, sat around the bar. A few joked jovially while watching baseball on one of two TVs; others sipped silently, lost in their own thoughts. It was a little like a grownup’s dorm room, right down to some aggressive body odor and off-color jokes. There was an air of familiarity among all of them—this was “their” place. Their comfort was clear; my sister jerked her head down when a man exited the bathroom not quite all buttoned up.

The gender imbalance was a concern for at least one guy. After letting loose a fart so rank that he felt compelled to buy us ladies beers to make up for it, the man chatted about the lack of women. “I keep telling them to keep the bathroom clean,” he explained. “If you want to attract the bees, it’s got to smell like honey. If it smells like shit, you’re just gonna get flies!” (To be fair, the women’s bathroom was actually very clean, but then again, there were only three of us there to use it.)

After a couple drinks, our initial feeling of being outsiders melted away. There were no appearances to keep up. We could nearly act like we would at home, laughing at the men’s antics and discussing what level of hydration you’d have to be at to pee the color of our respective beers. Hey, girls can be gross too.

It was fun and relaxing and I can see why some need old-man bars after a long day. Sometimes you just need a beer without the scene. As we headed out, our benefactor implored us to come back. “We’ll keep the bathroom clean for you!”