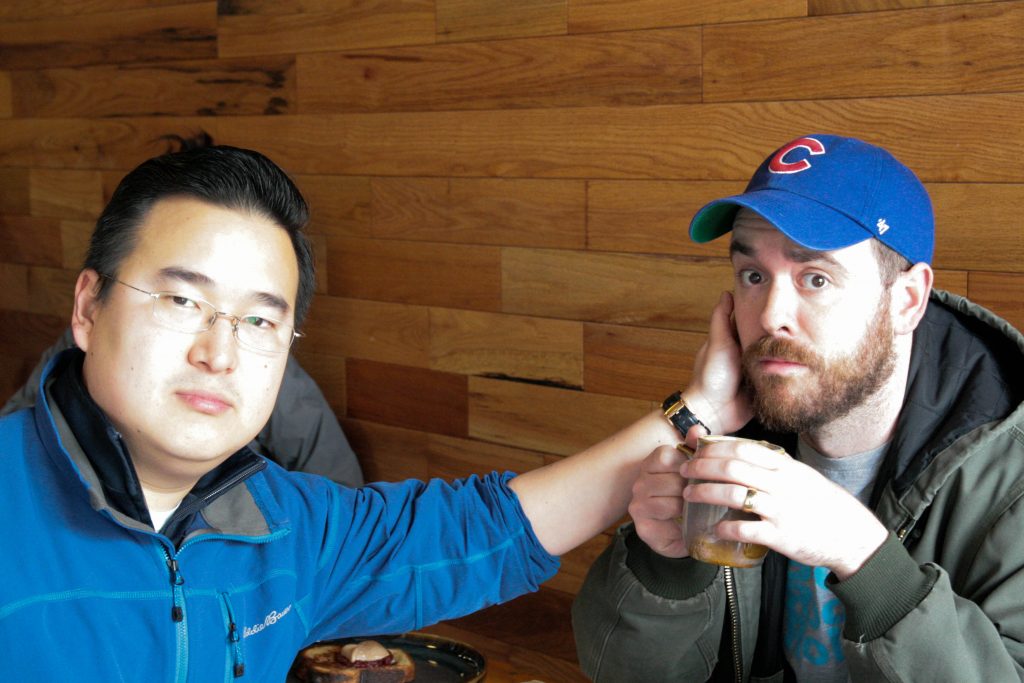 For this edition of our food versus food death match, we thought we’d move away from the meat-heavy contests of previous editions and do something more refined. So today, pinkies raised, we bring you… the best in canelés! These are delicate, mahogany-hued French pastries with custard-like centers, pronounced “can-a-LAYs” (and yes, we had to look that up beforehand so we didn’t sound like uncivilized brutes when we ordered them). Like most French culinary traditions, canelés are elegant, refined and served with champagne. Newly committed to finding the classiest of the classy, we two fancy lads put on matching linen suits and skipped arm-in-arm to a pair of well-regarded Chicago bakeries: Floriole Café and Bakery and Cellar Door Provisions. 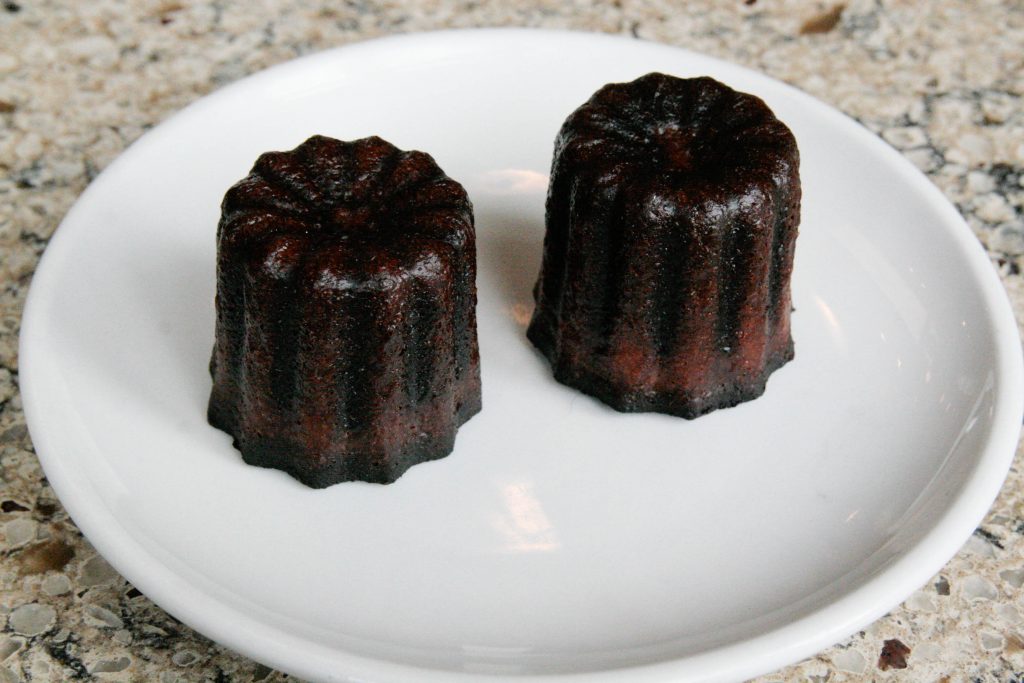 Canelés from Floriole Cafe and Bakery

Floriole Café and Bakery (1220 West Webster)
First we hit Floriole Café and Bakery in Lincoln Park, which is every bit the well-appointed piece of eye candy you’d expect from a high-end bakery in one of the city’s priciest neighborhoods. It’s run by Sandra and Mathieu Holl, a Tartine Bakery alum and a real live French person, respectively. Floriole has been tabbed as one of the best bakeries in America by “Food and Wine,” “Fodor’s Travel” and the Jean Banchet Awards, who this past January named Sandra their Pastry Chef of the Year.

John: They’ve got both chocolate and regular canelés, depending on when you wander in. I actually really enjoyed the chocolate. It’s got that deep, dark, pleasing hint of bitterness that you find in good dark chocolate. Reminds me of when I was a kid filching Hershey’s Special Dark from my granny’s old-lady candy dish while she tried to figure out what was going on. The absolute best bit is the crispy circle around the bottom where the fluted sides meet the base. What did you think of the regular ones?

Dennis: I prefer the regular ones. The chocolate adds extra weight to the batter, and to me, a great canelé’s interior should toe the line between richness and fluffiness. This falls onto the heavier side. The regular version is also a little dense with a smaller hole structure than I personally prefer. But this is really just me being a dorky food writer—I guess since I’ve always been a bit of a purist, the regular one is where my vote goes. 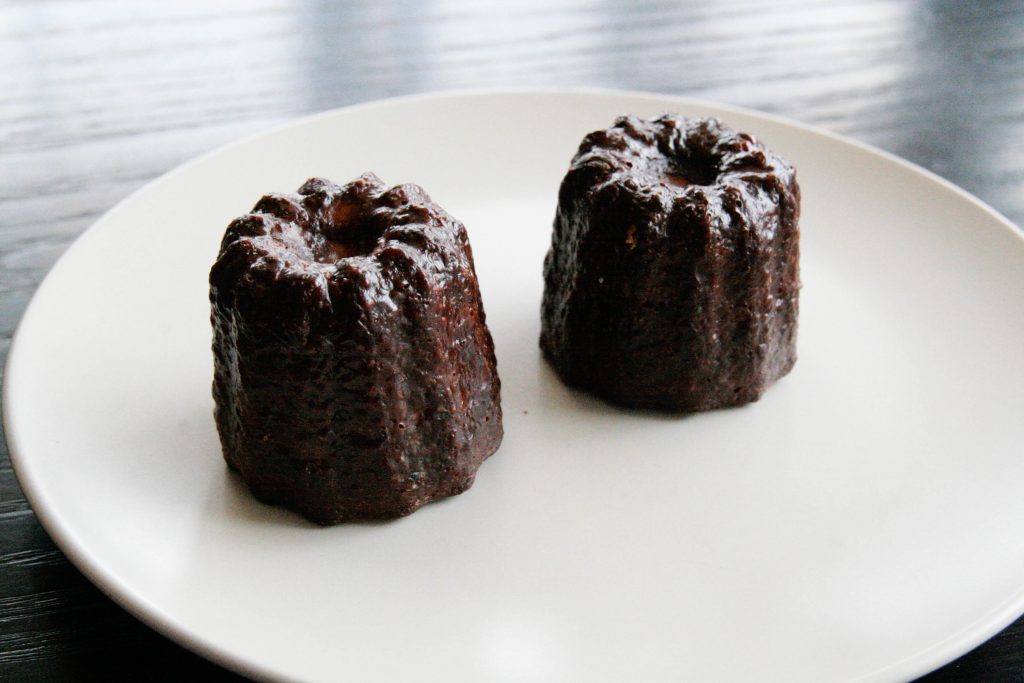 Cellar Door Provisions (3025 West Diversey)
Afterward, we hit Cellar Door Provisions, which echoes its neighborhood in much the way Floriole does—large, on-display kitchen, minimalist decoration and one gigantic communal table. You could be driven there blindfolded and still correctly peg the location as Logan Square (or Avondale, if you prefer). It’s owned by Ethan Pikas and Tony Bezsylko, who try and bring local Midwestern ingredients to the forefront of their baking. Chicago magazine loves them, Serious Eats loves them and their canelé was apparently good enough to give Michael Nagrant the vapors when he wrote about them in Redeye last November. Seems we’ve found a worthy contender.

John: Holy hell. Now this is a custardy pastry. I don’t think “delicate” is the right word for it, because there’s a lot of flavor going on. But every element absolutely stands on its own.

Dennis: If you’ve never had a canelé, go to Cellar Door early and get one since they run out early. You’ll be spoiled for life. The exterior of a canelé should have this rich, almost burnt-caramel flavor. Cellar Door’s is a textbook version. Its interior has a hard-to-place floral spice to it, but after some nosing around, we found out that it’s bay leaf, of all things. Texture-wise, the hole structure is bigger, giving this rich pastry the sensation of being light yet rich. Unreal.

John: I like that when we asked around the edges of how they did it, Tony told us everything we wanted to know and volunteered even more than we thought to ask. That’s the sign of a guy absolutely confident in his technique and his product. Secret recipes are for barbecue pitmasters who don’t want to tell you the mystery ingredient is ketchup.

The Verdict: Cellar Door Provisions Is the Best of the Best
John: Floriole is a really great place to visit, and they bake a mean canelé, but I’m not sure there’s one anywhere that I’d take over what we ate at Cellar Door.

Dennis: Cellar Door, hands down. It takes a lot to drag me out of bed early—especially for pastries, since I’m not a dessert or bread person—but I’ve seen the top of the canelé mountain and it is good.