At Cervecería Cruz Blanca (904 West Randolph) Jacob Sembrano is the “head brewer” for this Rick Bayless production, right next door to the fancier Lena Brava.

Auditioning for Bayless
We had to ask Sembrano about his audition with Bayless, certainly one of Chicago’s most internationally recognized, thoughtful and fiercely intelligent chefs.

Going into his first meeting with Bayless, after being vetted through several preliminary interviews, Sembrano admitted that it was maybe a little intimidating. He brought some beers to share with Bayless, “beers I brewed that I thought were interesting and that I could build a conversation around. Then one-by-one, we went through each beer and I talked about my personal connection and reasoning behind it. I brought a Flemish sour brown ale that I added cranberries to; a European table beer, just two to three percent ABV [alcohol by volume], very easy drinking; and a Porter that I added coffee and sesame seeds to.”

What clicked with Bayless and influenced him to conclude that Sembrano was the guy he wanted to brew his beer? According to Sembrano, “It was probably less about beer and more about how I spoke about it. Sharing my personal connections with the beers and articulating them was probably more important than the beer itself.”

Philosophy of Beer
Bayless clearly has an intellectual and emotional investment in every dish on his menu. So perhaps it pleased him to see the same mindfulness, the same heart in the beers Sembrano was offering up as samples of his best.

“Everyone in this company has a passionate connection to what they do. It goes beyond day-to-day operations. You think about things a little more deeply. Chefs, the spirit director, sommeliers, all have that passion. They really care about what they do. And that,” says Sembrano, “is more important than anything else.

“Beer at Cruz Blanca is a mashup of my interpretation of certain classical styles of beer. We want it to be as easy as possible. Eat what you want, drink what you want. My beers are made with integrity, great ingredients and what I like to think is good execution, so there are a lot of beers here that go well with Mexican food. People put a lot of emphasis upon perfect pairing, but it can be a lot simpler than people might think, especially with beer. Beer is such a flexible beverage when it comes to pairing with food, so it’s quite easy.” 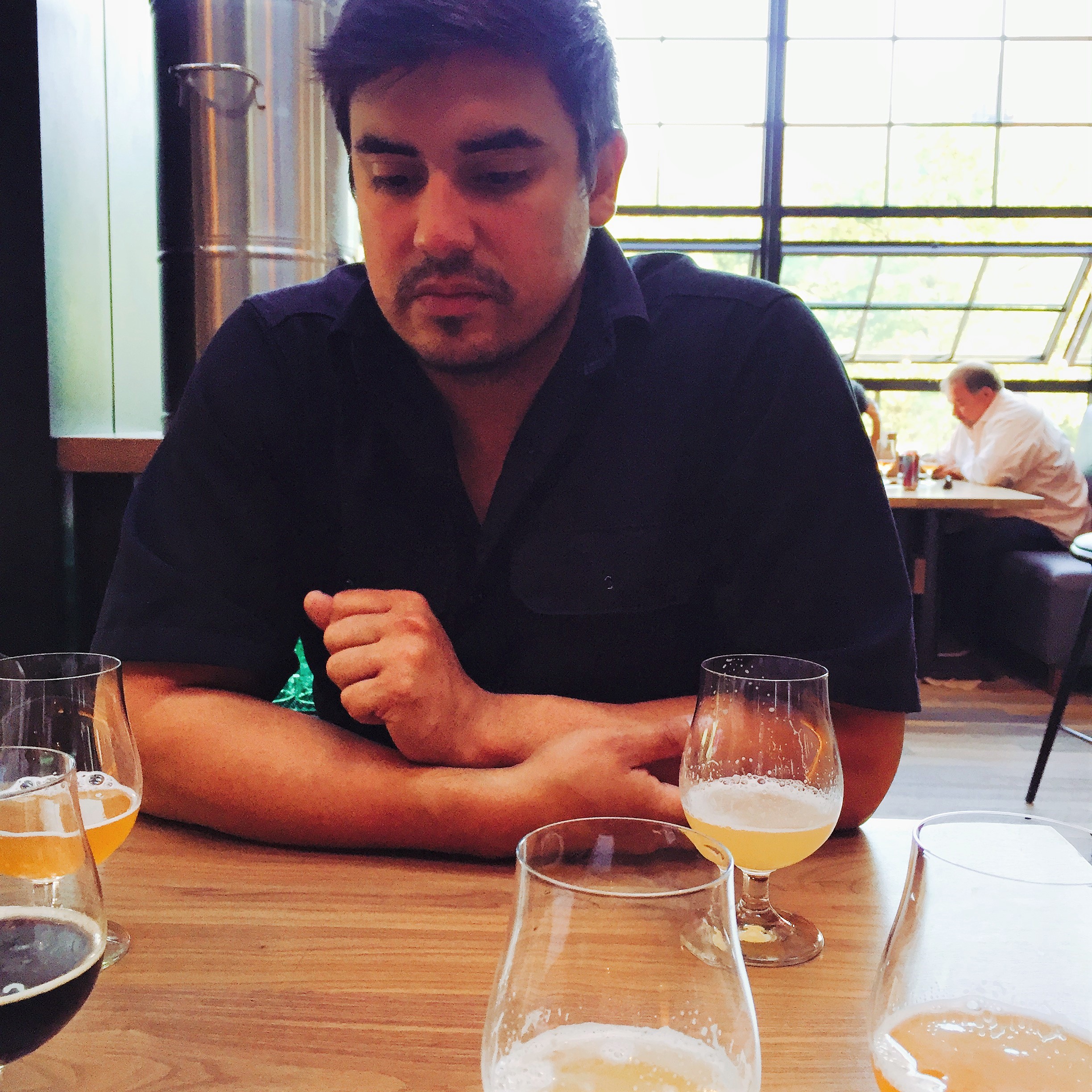 Three Must-Drinks
Sembrano sits with us as we try three of his favorites, talking through each of them and telling us what he hopes we are tasting. Each is just a mind-blowing brew, showing a lot of thought and complexity, exactly what you’d expect from the School of Rick.

La Guardia Rubia. “This traditional French Bière de Garde is brewed with a large percentage of honey. This is a good beginner’s model, refreshing and it finishes dry with mid-palate sweetness, effervescence and low bitterness. Rick gave me the challenge of finding a maltster [a person who malts grains for beer], and we found this guy Caleb, who grows barley in Indiana. He’s a micro-maltster. You have to germinate grain to awaken the enzymes needed to turn starch into sugar. So Caleb malts the grain and it’s very rare to see any one person or a small company do it because it takes a lot of labor and is very time-consuming. Usually you’ll see only larger companies doing malting because they have the space and the infrastructure. Rubia is a good way to showcase Caleb’s malts and northern Illinois honey. This is a great beer for anyone; dry, very easy drinking. This is our number-one seller, with almost no hop aroma but rather a malty sweetness.”

Smoke Alley. “Smoke Alley was inspired by a trip to Oaxaca,” says Sembrano, “and it’s a unique beer because it’s four percent ABV, very refreshing, dry, with a little haziness. It’s brewed with a large percentage of delicately smoked malt, inspired by Mercado 20 de Noviembre [a smoky indoor market/eating hall in Oaxaca]. It has German hops that impart an herbaceous character that complements the radish and cilantro and cucumber. We wanted a beer like this to have with a taco, and in the style of those tacos, these are our interpretations. Citrusy, a touch of tartness and delicate smoke that’s not overwhelming, just a wisp of smoke. Smoke Alley has a lot of flavor, but it doesn’t linger; it drops off quickly.”

Winnow. “Frontera on Clark is the beating heart of our chocolate program, with thousands of pounds of chocolate going through every year. They get the beans from Tabasco, Mexico and when they come in they give them a quick roast and then put them into a machine that winnows them, forcibly crushing the nib and vacuuming up the skins. Nibs go into the chocolate; skins are put into a reservoir that they routinely clean out. The skins they usually compost, but this is a good way to use the skins as a resource. Matching the grains with freshly winnowed chocolate skins provides a delicate foundation.” 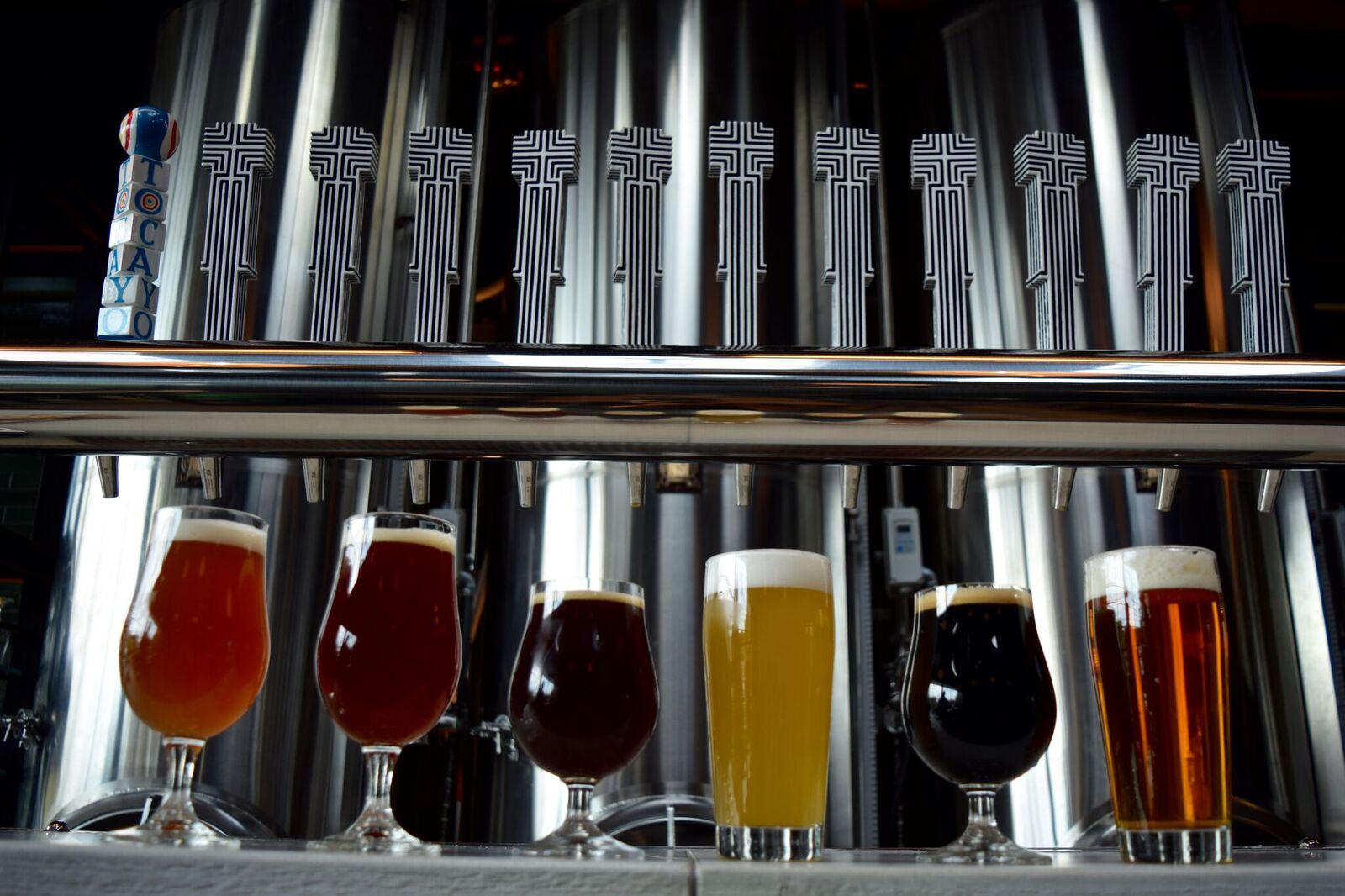