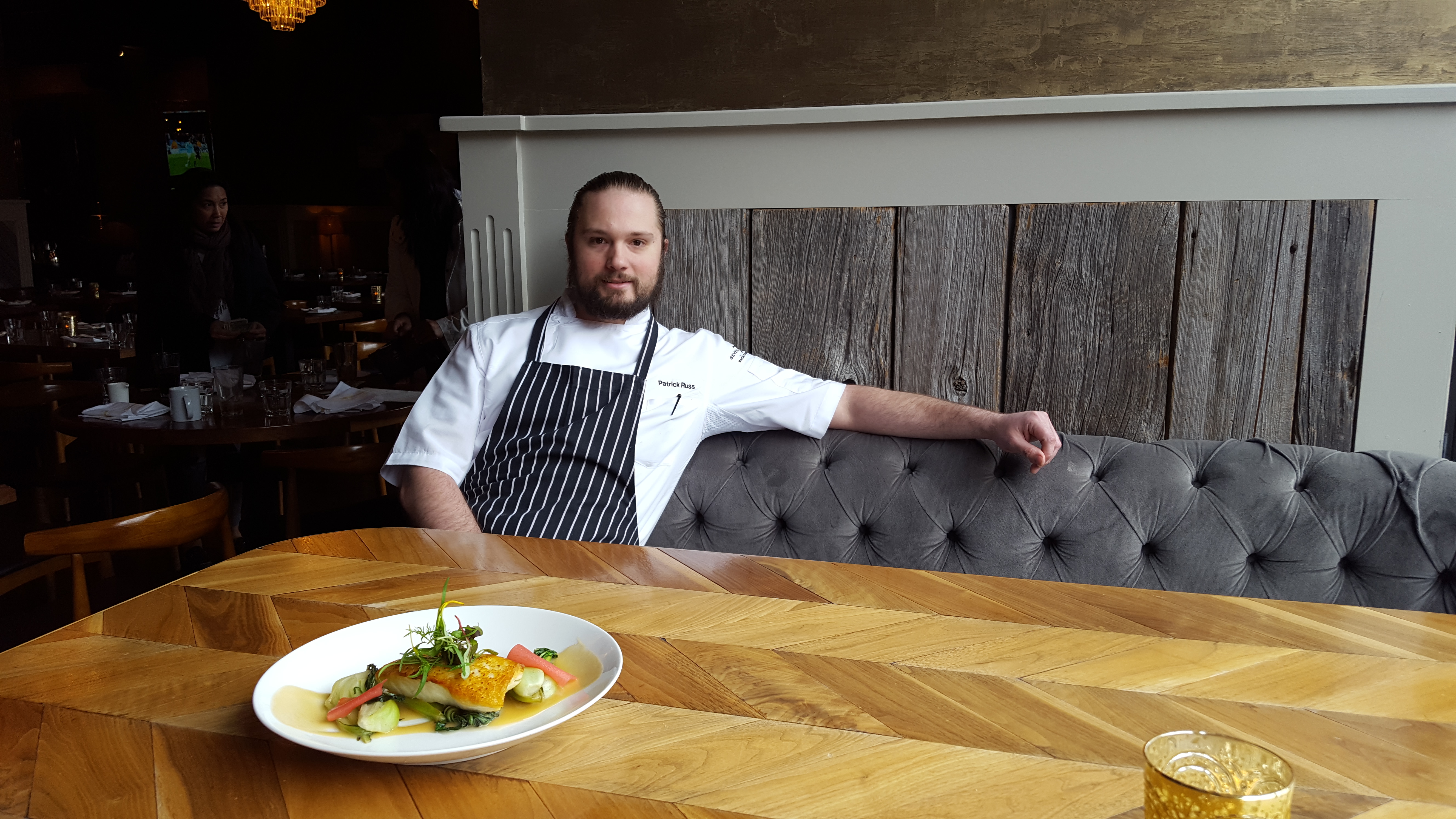 Patrick Russ and his Alaskan Halibut

In the Loop for a day of museums and musicals? Seven Lions (130 South Michigan) is an excellent place to enjoy a meal. No time to waffle over the menu because you’ve got a show to catch! To help you select a feast, fast, Chef Patrick Russ gives us some insight into his history, and most importantly, his favorite dish, so you’ll know exactly what to order.

Working in the kitchen of an Italian restaurant was a sweet summer gig for a high schooler, but not a profession that Russ thought he might pursue. He went on to attend Indiana State University, where he was an art history major. But after a year and a half, the studies weren’t working out and Russ fell back on what he knew how to do: cook.

He entered a culinary program at a community college in Indianapolis, then transitioned to Le Cordon Bleu in Miami. Post-graduation, he took some corporate kitchen positions in South Beach, Florida. It wasn’t really what he was looking for, so it wasn’t long before he packed up his mom’s minivan and took to the road.

Russ camped across the country for two and a half months before settling in Seattle. He went to work at Osteria La Spiga under Chef Sabrina Tinsley, spinning out Italian food from the Emilia-Romagna region. Though the menu was Italian, Russ also took to heart the culinary values of Seattle, favoring seasonal cooking and local, fresh ingredients.

But Russ wanted something more. Inspiration came in the form of a gift from his parents that he’d received back in his Miami days: the Alinea cookbook. “I wanted to work for Grant Achatz. That was my goal in life: to get to that point,” he says. After that realization, it was “So long, Seattle,” and “Hello, Chicago.” Russ earned a spot on the opening team for Achatz’s Next restaurant. “It was what I wanted—it was a lot of long hours, very stressful, but I got to learn a lot.”

The techniques he picked up at Next would influence him as his career progressed. After a couple of years at the acclaimed restaurant, he spent time running the kitchen at The Dawson, opened by Rene De Leon, another Next alum. Not long after, Russ was offered the chef de cuisine position at Seven Lions.

“I was sick of big restaurants, kind of turned off,” Russ says. Still, despite its size, Seven Lions felt like the right fit. Eventually executive chef Chris Curren left the kitchen and Russ stepped into the role.

It’s the team at Seven Lions that Russ credits with making him feel at home. “We’re a family and that goes a long way, especially when you’re trying to have someone replicate the food that you’ve created.”

The Seven Lions menu is mostly comfort food, a product of technique, background and travel experience. “I try to bring all that together and put it on a plate,” Russ explains. “Approachable, but new in technique and interesting at the same time. Not stale, not the same thing you see on Michigan Avenue all the time.” 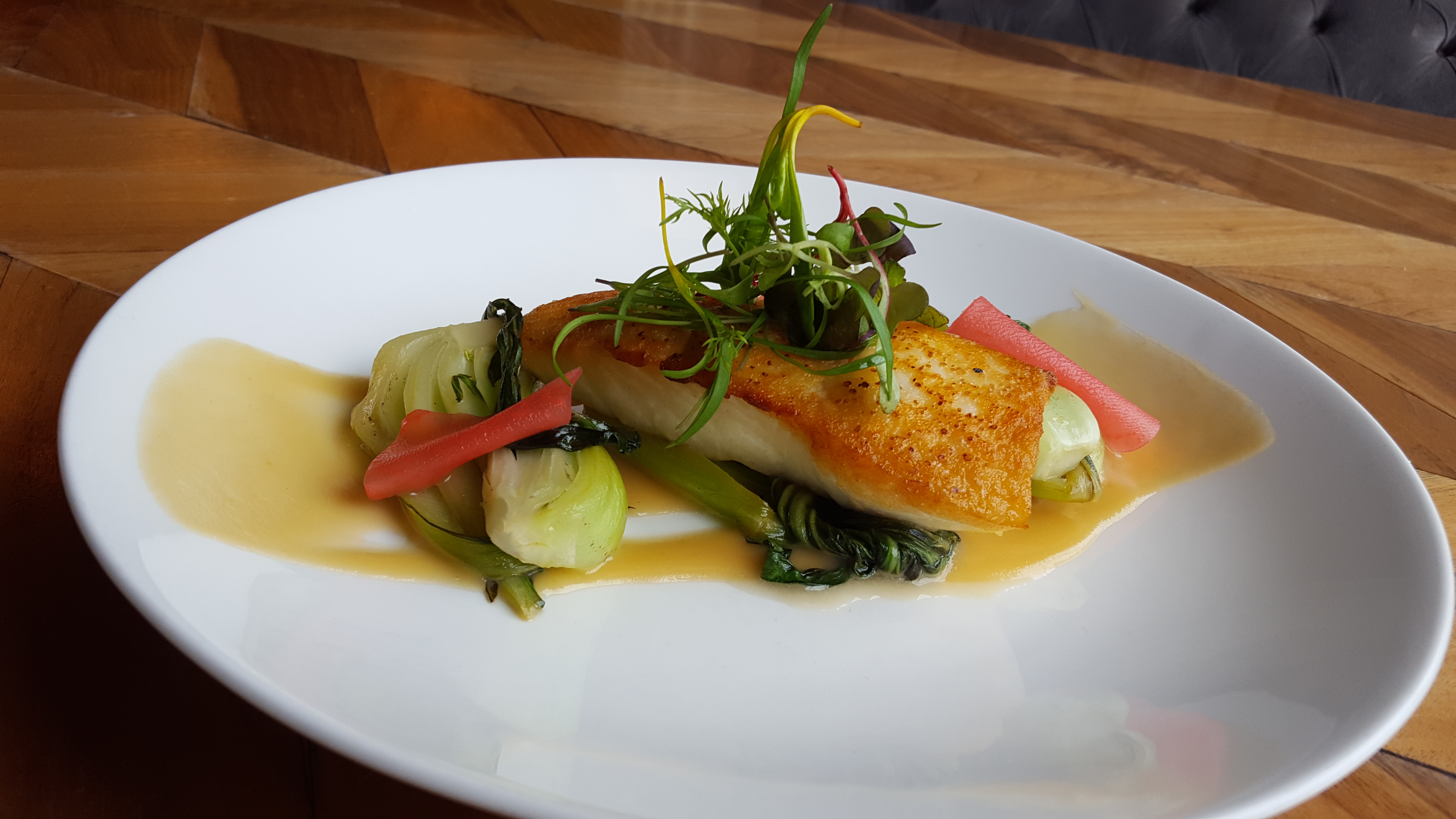 Of all the dishes on the Seven Lions menu, the Alaskan Halibut is the one owner Alpana Singh calls “Patrick on a plate.” Russ himself agrees: “It’s got a little bit of technique in there, different flavors… beautiful.”

The halibut is pan-seared and placed on an apple-miso puree. This emulsion—made with apple, yellow miso, caramel and herbs—draws on techniques Russ learned at Next. Seared bok choy frames the fish. Shaved kohlrabi, pickled with beets, adds a pop of color. The result is a combination of the familiar and the out-of-the-ordinary as the apple’s sweetness plays with the funky miso and tang of the pickled kohlrabi. The halibut’s clean flavor make it the worthy centerpiece of this Asian-influenced, perfectly composed, summery dish.