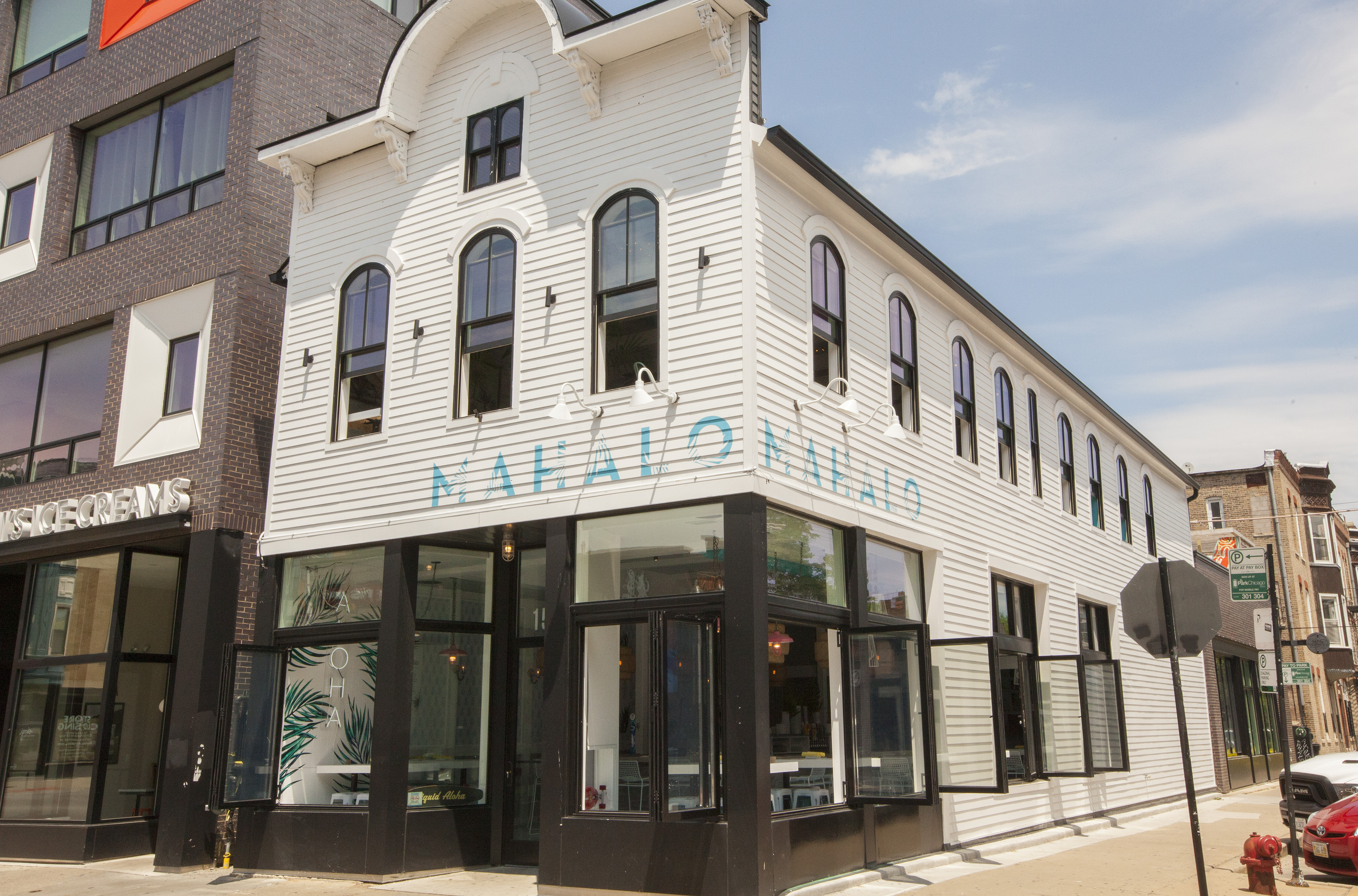 “Bye guys, mahalo,” a red-haired hostess in a floral romper and lei says to diners who are leaving as we’re entering.

We’re in Mahalo (1501 North Milwaukee), a new Hawaiian-fusion restaurant and bar in Wicker Park. “Mahalo” means “thank you” and a neon pink “Mahalo Vibes” sign lights up the back.

Mahalo is a different type of place, an “aloha experience,” that starts when the hostess says “Aloha!” and you begin to hear Bob Marley sifting through the air (Marley’s sound being ultimate island music, whether you’re in the Pacific or the Caribbean).

“We call it mana,” says David Acevedo, a manager at Mahalo, of the aloha spirit. “It’s a really deep energy, a way of life that goes much deeper than being nice.”

Acevedo trains the Mahalo staff in operations. He also trains them in understanding and sharing Hawaiian culture. Acevedo is not Hawaiian. He’s Puerto Rican and Italian and hails from the ‘burbs. But the thirty-four-year-old has spent the last sixteen years performing hula, Samoan, Tahitian and fire dancing, saying “In the summer months I don’t have much arm hair.” Acevedo runs a Polynesian dancing academy in Roscoe Village with his wife, who is Mexican and trained in hula.

Acevedo fell in love with Hawaiian culture after joining a hula group after high school.

He spent years traveling to the islands and performing luaus in people’s backyards. He eventually decided to spread out in the Midwest. When Acevedo heard about Mahalo’s opening, he walked in to ask if they needed hula dancers. He ended up with a job as manager.

“I’m not teaching my servers hula,” he says. “I’m teaching them Hawaiian values, Hawaiian words, Hawaiian ideals—the thing that makes that aloha so special—and if they can pass that to the guests who come eat, it’s another way to tap into spreading that aloha spirit in Chicago.”

Acevedo writes Hawaiian “words of the day” on a whiteboard downstairs. He has the staff wear kukui nut leis, the oil-filled nuts that ancient Hawaiians used to fuel their torches.

His philosophy for the restaurant is from a Hawaiian proverb–“no task is too big when done together”—and he encourages servers, bussers and hostesses to work together as a family, what the people of Hawaii call “ohana.”

Brad Parker, owner of Mahalo and River North’s Hampton Social (another experience-driven restaurant), says that the Hawaiian attitude extends from the restaurant’s hospitality to flexibility in employees’ time sheets, focusing on their quality of life in and outside of work. “In Chicago,” Parker says, “we focus too much on work, work, work. Before we know it, we’re old and ask ‘Where did my life go?’  We’re trying to be the Google of restaurants,” he says, referencing the laid-back atmosphere at one of the world’s great companies and one that helped create a new style of working environment by destroying many of the conventions of the traditional work space.

“We’re not the James Beard-award-winning restaurant,” says Parker. “We’re trying to be a really good, approachable place that people can go to multiple times.”

I must admit, for this reporter, after sipping rum from a pineapple out of a bendy pink straw and listening to Hawaiian music on a patio, I did forget —just for a little bit—that I was on Milwaukee Avenue in the middle of the work week. And for that, I say, from the heart, mahalo. (Rosemary Lane) 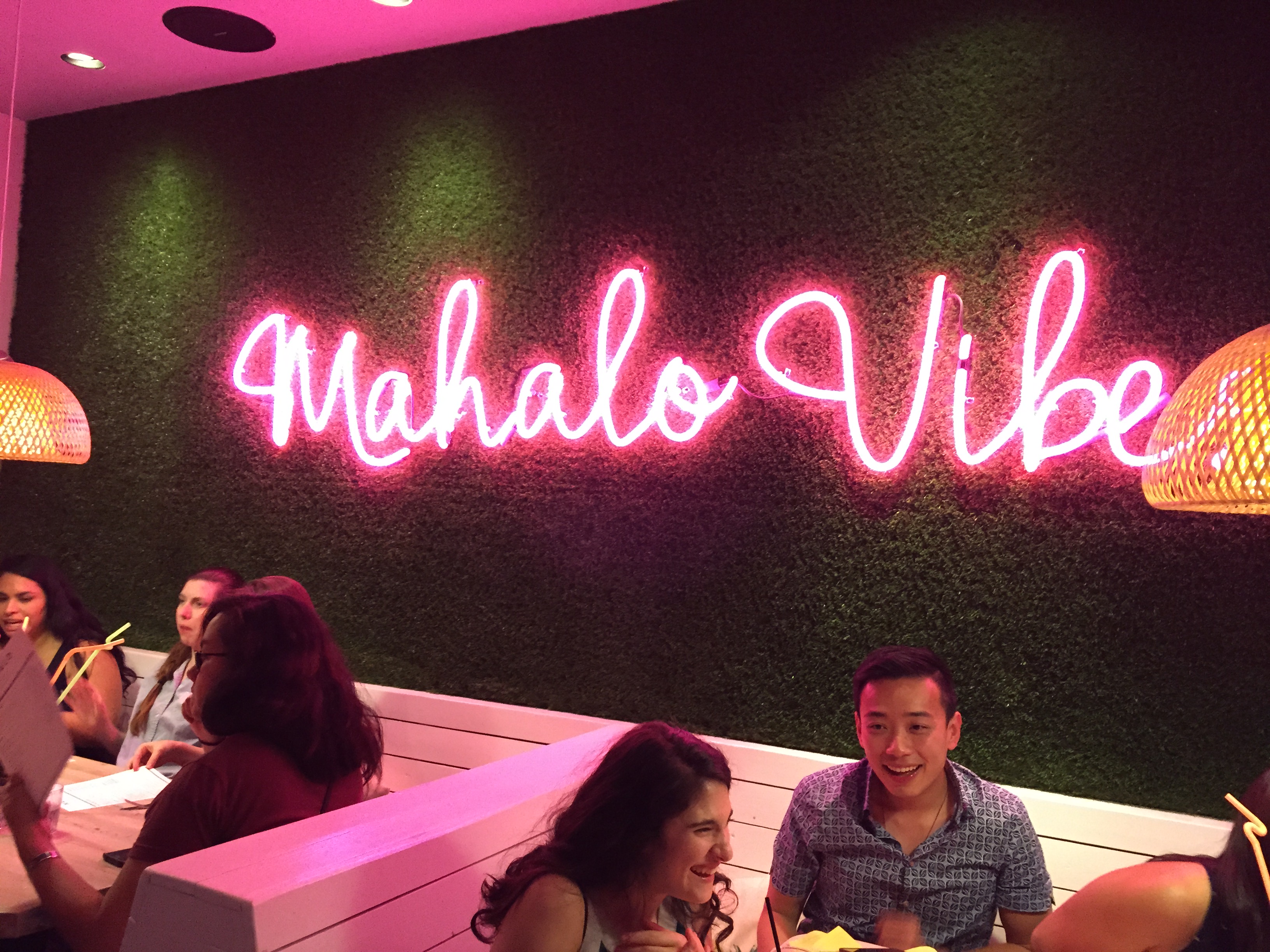