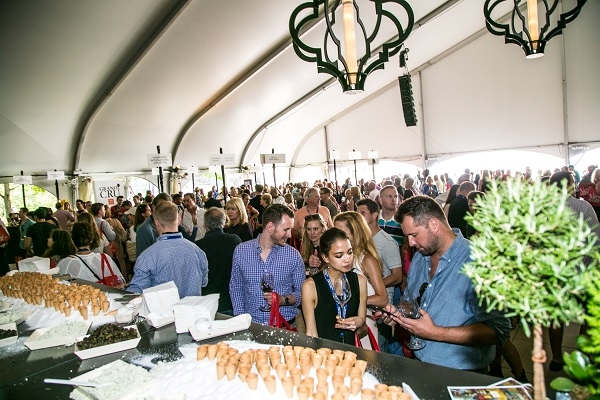 Chicago Gourmet—September 23-25 in Millennium Park—is the crown of fall food festivals, bringing together dozens of Chicago’s most accomplished and recognizable chefs. It’s fun, it’s delicious… and there are some rules. Actually, they’re just my rules, and it’s not like I haven’t broken them now and again, but I try not to and you should, too.

Move along there. Because Chicago Gourmet gives you the chance to get up close to some of Chicago’s most innovative and cool chef people, you might be tempted to engage them at length as you stop to pick up some food. Don’t. Say hi, compliment them or the food if you’re so inclined, then move along. There are people behind you who will be much less entertained than you by your attempts at witty banter. I speak from experience and from the many experiences of people standing behind me in line at past festivals.

Don’t drink too much. It’s hot, the food is outstanding, there’s alcohol everywhere, and it’s sitting out there waiting for you to drink and drink and drink. Again, don’t. A ticket to Chicago Gourmet is not cheap ($185 for one day), and there’s a lot of fantastic food to eat and people to meet, so don’t blow it (and your chow) by over-indulging, as tempting as that might be. Hydrate, but don’t intoxicate (at least not too much).

Don’t eat over the table. When you take your plate or boat or skewer of food from the table, don’t stand over the table and eat it, using the other plates of food, etc., as your catch basin. It’s gross and unsanitary. And when you’re at one of the drink stands, try to remember that you’re not at a bar: avoid just standing there and throwing them back while others wait patiently behind you.

I’ve violated all these rules, some of them more than once, and I expect I may inadvertently do so in the future. Following them, however, is a good way to get the most out of the festival, while allowing others to do the same.

This has been a public service announcement. (David Hammond)