by Brian Hieggelke
September 25, 2016Filed under: 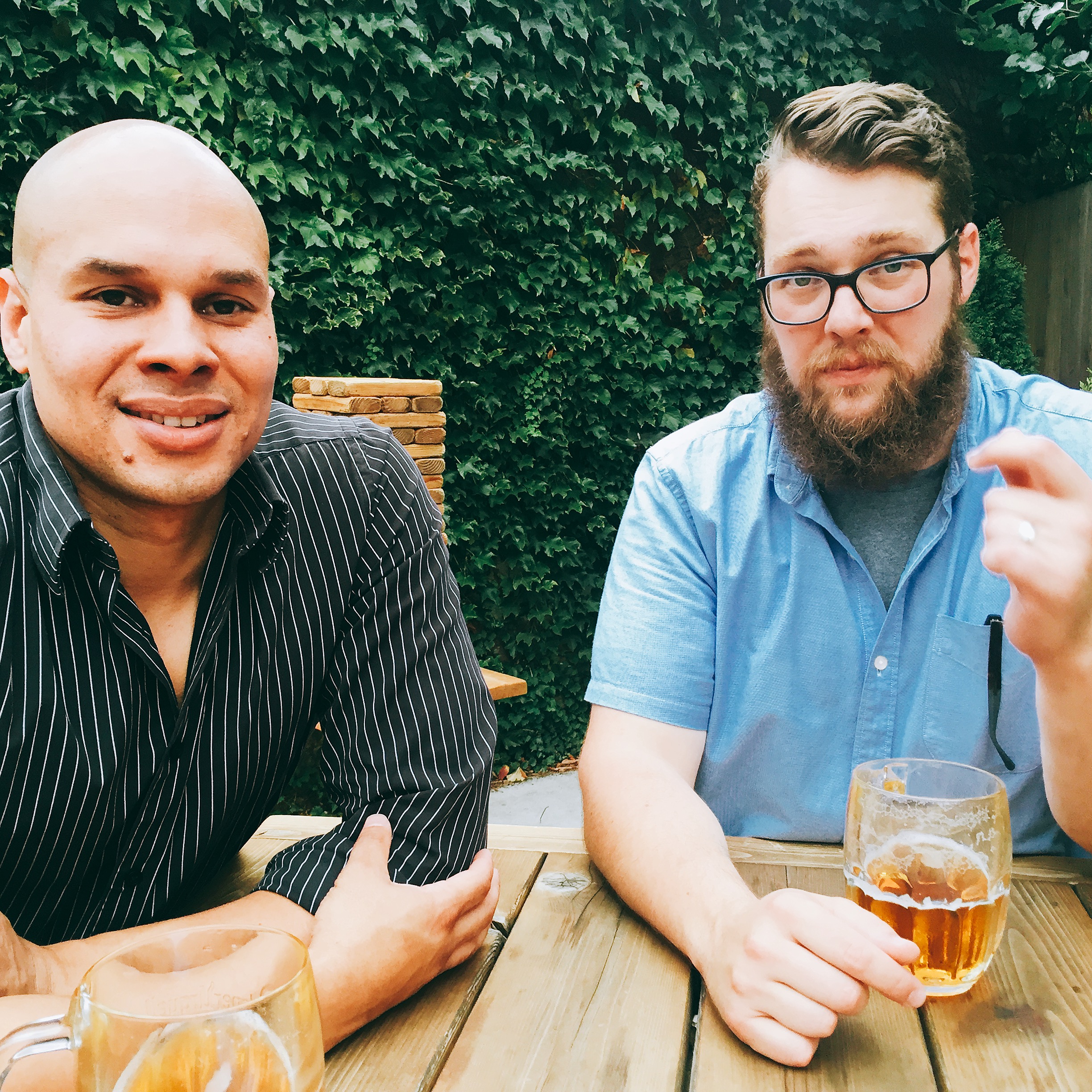 I’m sitting on the patio at Kaiser Tiger (1415 West Randolph), drinking Pilsner Urquell with two cicerones, Jason Pratt and Brian Reed. Both Pratt and Reed were qualified to select, serve and care for beer through Ray Daniels’ Cicerone Certification Program in Chicago, the only place in the world offering such certification.

I remember having Pilsner Urquell for the first time in the late seventies, at a lawyer friend’s passing-the-bar-exam party. He’s retired now and I’ve had the beer many times over the years. But as with Heineken, Pilsner Urquell seems to have changed over time, tasting a little mellower, maybe less nuanced. It occurs to me that maybe it’s my palate that has changed. Both Pilsner Urquell and Heineken seem to have lost their edge, their earthiness. I figure maybe the beers were modified for an American audience, and I was hoping the unpasteurized, unfiltered version of the Pilsner would maybe bring me back to that remembered flavor.

In Oak Park, Kinslahger (6806 West Roosevelt) is focusing on lager and they’ve gone back through the archives to find the original recipes and bring those old styles and tastes back to life. There’s demand for that. Just as people want heritage animals (mulefoot hogs, ameraucana chickens) and produce (heirloom tomatoes, ancient grains and so on), so too, it seems, people want heritage beer, untainted perhaps by corporate influence, pure and, one might legitimately say, authentic.

About heritage beers, Reed feels “there is probably not a brewing culture that represents that more clearly than the Czech because this traditional beer has been brewed in Moravia, unchanged, since 1842: same hops, same yeast, same water.”

“In America,” says Pratt, “a lot of styles have been resurrected after dying out. Many styles have come almost to the point of extinction, like Russian Imperial Stout, but now they’re coming back, thanks to craft brewers. Pilsner, however, never went away.”

“Aside from satisfying an anthropological interest in the history of beer,” I ask, “is there any sense in which the old ways, the old beers, are better?”

“From a technical standpoint, we now know how to keep beers fresher longer,” says Pratt. “And there are the microbiological factors they just didn’t know about back then. Still, these old brewers knew what they were doing.”

“How, then,” I ask, “has Pilsner Urquell changed? Because it doesn’t taste today like it tasted forty years ago. Is it just me or has the beer itself changed since the first time I tasted it?”

“The beer has changed,” says Reed, “for the better.”

“Everyone has gotten better at packaging,” adds Reed, which may explain why even Heineken, over the years, tastes a little different that it used to.

“Another change,” explains Pratt, “is express cold shipping of Pilsner Urquell. The beer is sent over refrigerated to ensure it doesn’t get exposed to swings in cold and heat that cause it to oxidize faster.”

I admit, somewhat abashed, that I may have actually liked that skunky taste. Pratt explains that others have voiced the same preference: “Some people call it ‘import character.’ Imported beer a lot of times comes in green bottles, so it has a flavor that people associate with beers coming from other countries. Sometimes people have a German beer they like in the U.S., and then they go overseas and have it on draft, and they say, ‘Hey, this is not my beer.’”

And that explains why Pilsner Urquell doesn’t taste the same: it lacks that import character, the funk and earthiness—the skunkiness, if you will—of the same beer in the days when it came in a green bottle and was perhaps improperly handled during shipment. I miss it, even though I have to admit that the taste of the Pilsner Urquell is much cleaner today.

And the unfiltered, unpasteurized beer we sample? Very good, weightier on the tongue, with more dimension to the sip, but still, I miss the funk. Just as some people may prefer Kraft Macaroni and Cheese to a chef-driven version with handmade pasta and artisanal cheese, or a bar of Hershey’s chocolate to a $500 dollar bar of To’ak from Ecuador, so I long for the Pilsner Urquell of memory, mishandled, flawed and funky. I can’t argue that skunky Pilsner with import character is a superior sip to the fresh stuff, unfiltered and unpasteurized, but still I miss it.