by Brian Hieggelke
November 16, 2016Filed under: 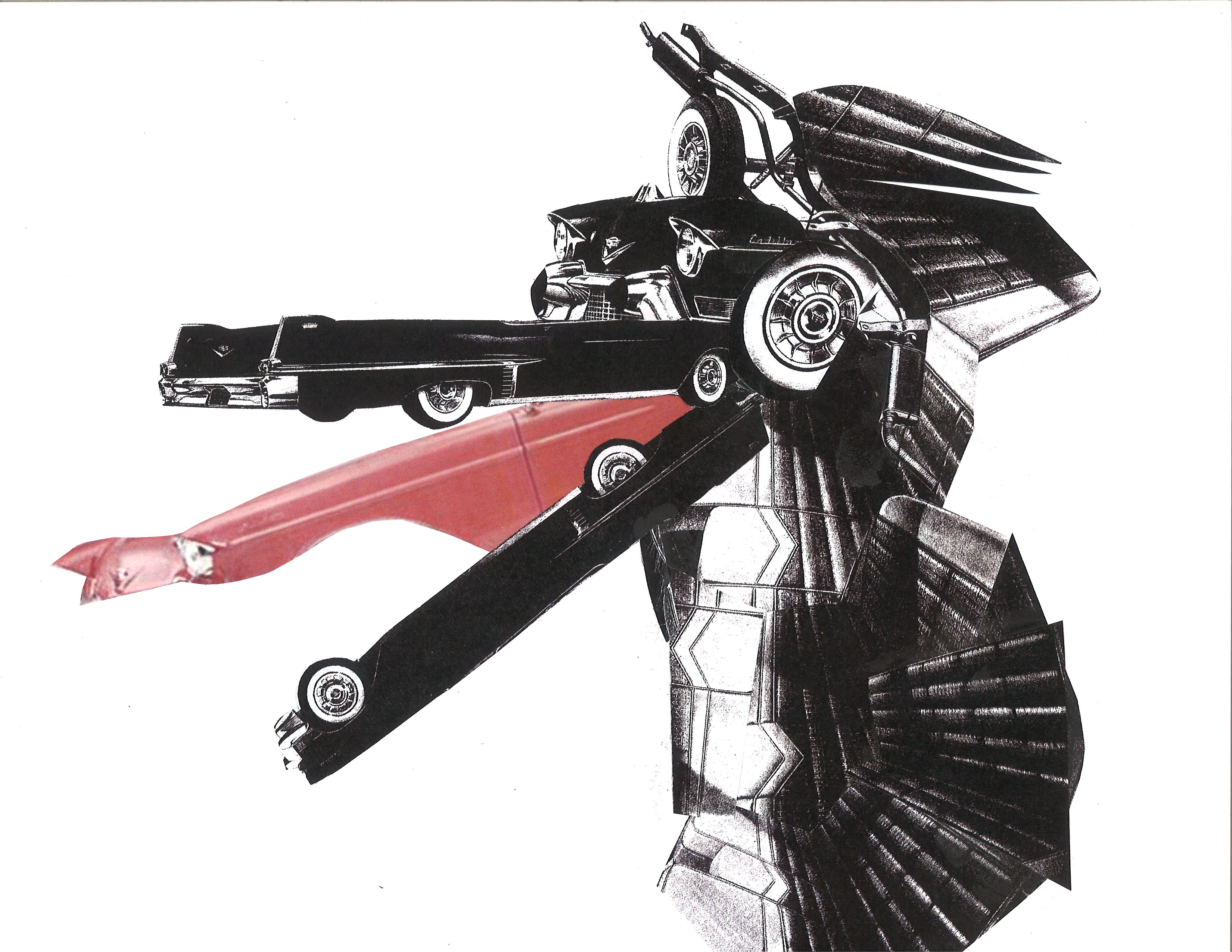 On a Friday night early this fall, members of the University of Chicago community gathered on the first floor of a campus parking garage. Students, no doubt intrigued by the university’s latest ploy to hip up their brand, were eager to play it too-cool-for-school while taking full advantage of a gourmet spread of fruit and cheese paired with complimentary beverages. Faculty and staff, happily occupied with drinks in hand, were there to support their colleagues with young kids in tow, watching them run free in the concrete playground.

The occasion was a craft-beer release for “Concrete Happenings,” one of several events coordinated with the restoration of a sculpture by the artist Wolf Vostell. The artwork, a 1957 Cadillac encased in cement, was commissioned by the Museum of Contemporary Art in 1970, back when it was a non-collecting gallery with far more street cred and far less ambition. After Vostell supervised the concrete casting around the car, the MCA parked the sculpture on a downtown street for a few months before transferring it to the University of Chicago campus. Forty years later, the work was moved into storage to make way for the construction of the multi-million-dollar Reva and David Logan Center for the Arts, a towering concrete and glass behemoth that now looms over all of Hyde Park. “Concrete Traffic” remains the largest known work of Fluxus still in existence. It’s a record-breaker in more ways than one, with large sums having been spent on the expert restoration of the work before its unveiling when it was towed from the front steps of the MCA to a parking garage on the UofC campus.

The strangeness of this sculptural event registers on many levels. Most saliently, the spirit of Fluxus, an international art movement of the 1960s and seventies, eschewed permanent art objects in favor of the fleeting, unpredictable character of public performances and chance encounters through the interdisciplinary combustion of artists, composers, performers and participants. In that sense, the life force of Vostell’s original sculpture was its humorous contradiction: an icon of upper-middle-class American consumerist ideals rendered publicly immobile by the very material that made possible America’s vaunted mid-century architectural and infrastructural ambitions. Encountering Vostell’s “Concrete Traffic” by accident on a Chicago street corner in 1970, one can imagine being amused and curious, perhaps even enchanted.

In restoring the piece, the University mistook this ephemeral “event sculpture” for the kind of timeless monument typically entailed by large, heavy artworks. Moreover, considering how disregarded the sculpture had been for decades, with mineral-bearing rains seeping into the porous concrete and rusting the car inside, there is something delightfully ironic about its laborious restoration. Conceptual objections aside, the multi-year restoration project exemplifies the unique challenges of working with the cruelty of crude materials. The renewed “Concrete Traffic” looks as if it was freshly poured. 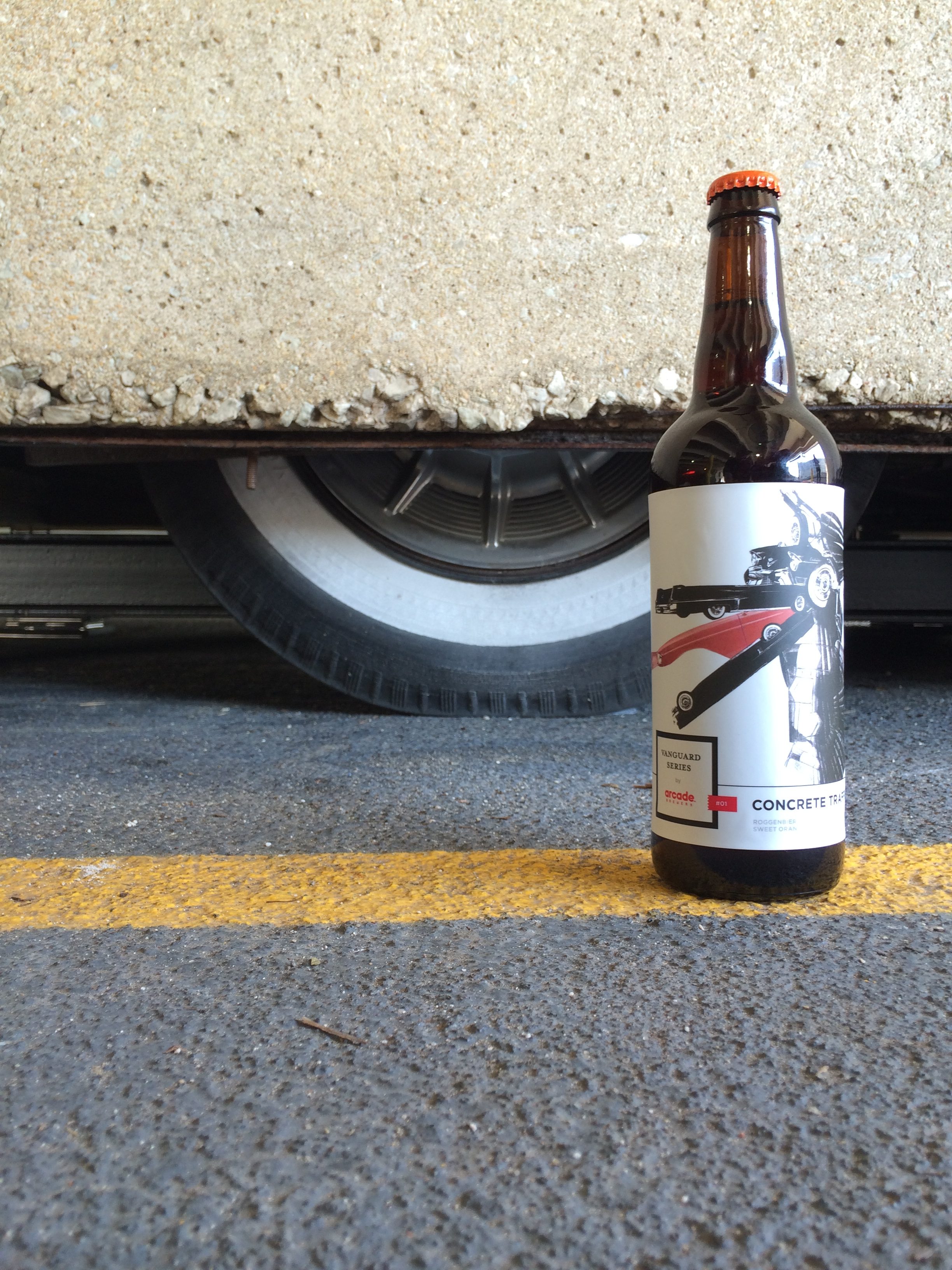 Concrete Traffic, the art and the beer/Photo: Erik Peterson

A fresh pour of the companion beer, brewed by Chicago’s Arcade Brewery, was a welcome quencher on a night a little too warm for the new season. The rye-rich base gave a hue of milky tobacco—a remarkable feat under the harsh lights of the garage—and set a strong but subtle undertone of spicy malts at the front. On this foundation, sour and savory notes reached high and plunged low, grasping at sharp upper limits and then digging deep into the rye to turn up unexpected complexities in the base malt. A light sweetness lingered at the end, resolving the palette with a twist on the main theme.

Brewed with lime and salt, this beer finds itself in good company with the Gose-style variations in vogue this past summer in Chicago. The beer, also named “Concrete Traffic,” will satisfy lovers of that type who want to keep drinking something similar, but seasonally apt, in the fall. For appreciators of the conceptual aspects of brewing, the use of acids and salts, corroding agents responsible for the deterioration of the sculpture over the years, is a much appreciated nod to the spirit of ephemerality that gave life to the original artwork.

The spontaneous uncertainty of Fluxus may be forever gone in today’s micro-experiential and monetized world of laptop-based television and sharing economies, but the conviviality of beer and outdoor art is a good enough reminder of the unique joys of communal experiences. Locally brewed, art-forward and with an attractive label to boot (designed by the Smart Museum’s Erik Peterson, an artist in his own right), “Concrete Traffic” will no doubt be the darling of many drinkers this season. As the first release in Arcade’s Vanguard Series, it aspires to herald the new avant-garde of Chicago’s ever-innovating beer culture.