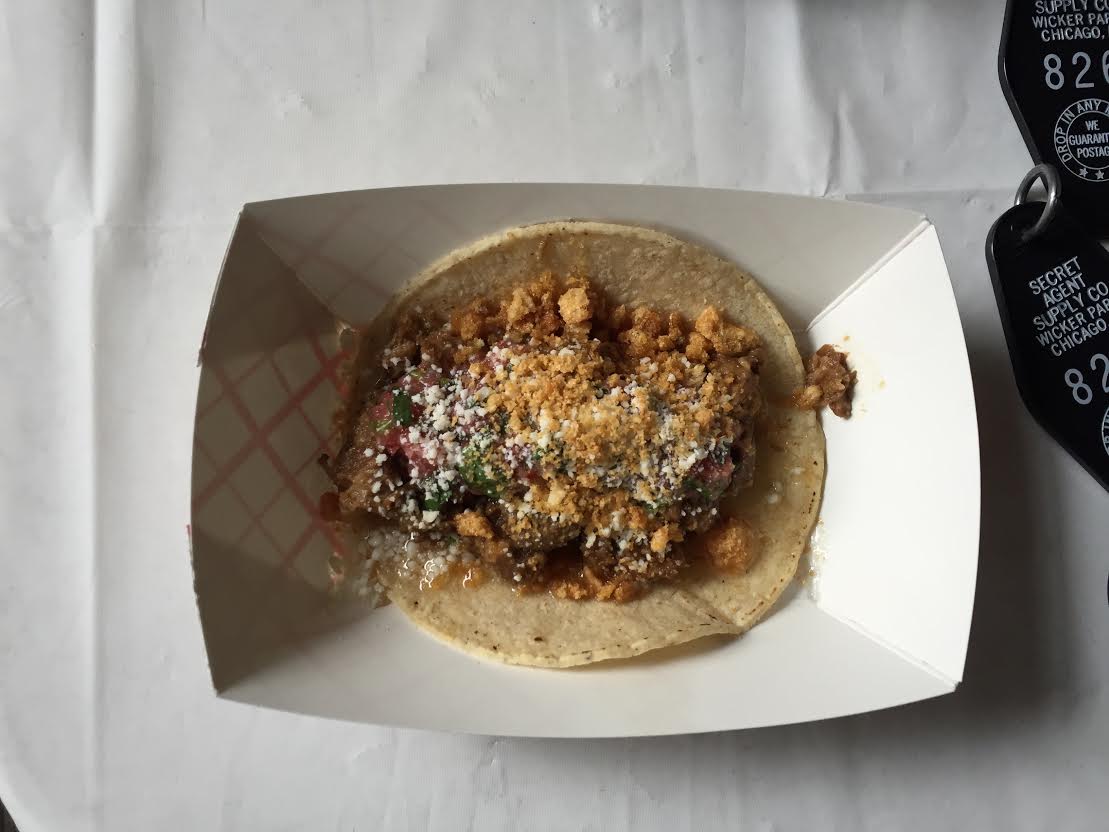 De La Cruz is standing outside the festival, at Logan Square’s Emporium Arcade Bar, when a twenty-six-year-old asks to take a picture with him. She had waited a whole year to try the donut. “I’m going home to eat it,” she says. “I have my sister in the car and she’s like, ‘Can I have a piece?’ I’m like, maybe, give me fifty dollars.”

The glittery donut was just one of the attractions at Kultura, a two-year-old festival held on October 2 and organized by Sarahlynn Pablo, Natalia Roxas-Alvarez and Caitlin Preminger of the food blog Filipino Kitchen. Squeezed in between pool sticks and Pac-Man, home cooks and chefs from all over the country spun traditional Filipino food into tacos, waffles, meat pies, nachos and, of course, donuts.

Here are five of our favorites, as explained by the chefs themselves:

“This concept is a meditation on the fact that Filipinos and Mexicans have been connected for centuries. We’ve had an exchange of food and ideas and culture facilitated by the Spanish who colonized us. I put that history into my food, but I also make sure it’s really delicious. I feel like food is a political act (if you want it to be). You know when your dog needs to take its medicine so you put it in the treat? That’s kind of the way I see my food. It’s not like I want people to swallow a bitter pill, I just want them to understand the history and where the food comes from. It’s not a pretty history. There is a lot of trauma and a lot of heartache and a lot of heartbreak that carries into the younger generations. People don’t realize. And my vision is to share that with people, [but] not in an angry activist way.” 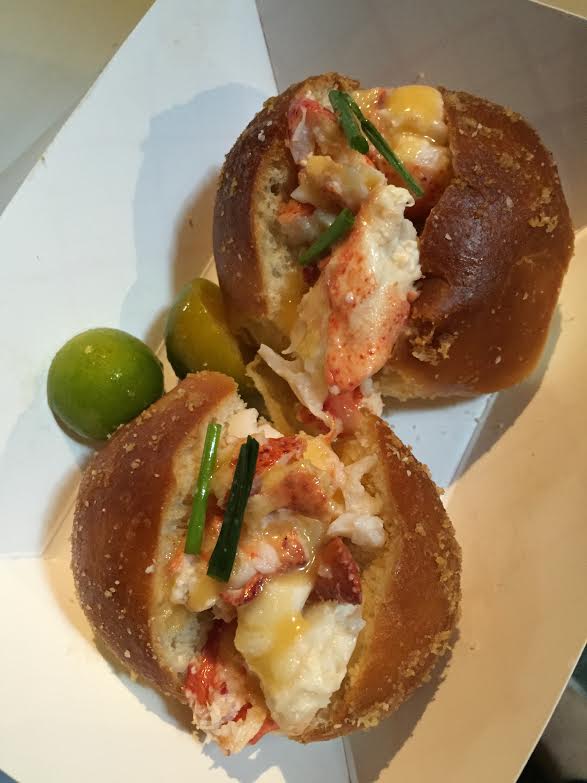 We tried our best to do a riff on an American comfort dish. We had another dish lined up to do from last year—it was our ube waffle and adobo fried-chicken sandwich—but we didn’t want to step on the toes of all the other chefs that were doing ube or adobo things. So this is kind of a quick Northeast vibe inspiration. We got some fresh Maine lobster and also longanisa, traditionally a sweet sausage. We smoked it with a little bit of hickory and alder. We steeped it in butter for quite a bit and finished it off with chive and fresh calamansi, which is like a Filipino Key lime.

I took the Filipino stew, kare-kare, made a thicker version of it and put it inside the meat pie. Inside is braised pork, oxtail, a little bagoong—which is like a salted shrimp—long beans, garlic, onion. On top, I made a peanut butter.  You can use whatever, Skippy’s, Jif.  You make a pork sauce, cook everything down, and finish it with peanut butter and toasted rice flour to thicken it a little bit.

My thought process was to serve something that was super comforting. Chicken braised in coconut milk is one of my favorite Filipino dishes that my mom would always prepare for us growing up. It’s a one-pot dish, it’s super easy, it’s packed full of flavor and it blankets the rice really well. My mom would prepare it with pork and then add vegetables to it, like a green jackfruit, which is called kamansi, and a lot more fermented shrimp. It’s a really hearty and homey dish, and I wanted to give it the same hearty flavor but with some crunch from the cabbage, and also the cilantro and the toasted garlic. 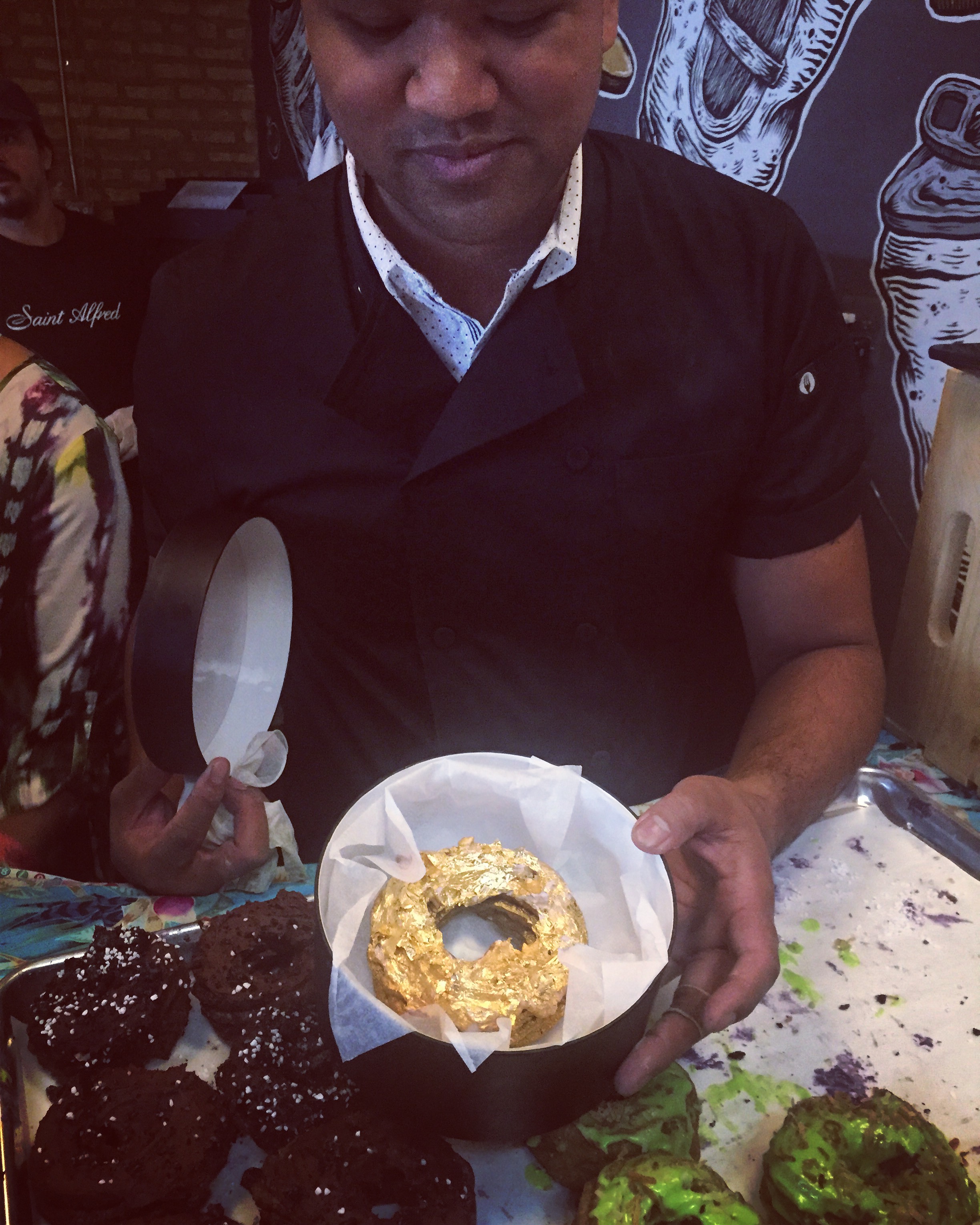 I flew in earlier this morning and TSA examined my bag. I have a bag of gold. It was funny. There was a couple behind me that was like “You’re the chef from Manila Social Club!” and TSA was like “OK, you must be legit.” The gold donut has to have a certain look. If I’m making five donuts, I pipe fifteen out and select which. When the donut is filled and cooled and iced, it gets airbrushed with 24-carat gold dust. Once that’s left to sit, I apply five to eight leaves of gold. I start from the inside and go out. It’s not the most exact thing—when I do it I feel like I’m constructing a flower. When you open it, you have a big rim of gold, and spilling out is purple mousse and what looks like diamonds. I’m really proud of it.