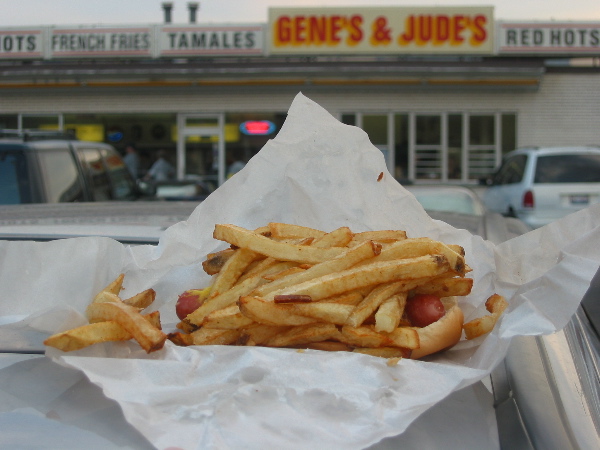 There’s this new fried chicken place, Budlong, in the Loop; the last thing that hurt my palate as much as their extra hot chicken was when I dropped too much Dave’s Insanity sauce in my gumbo at Heaven on Seven. Past all those Scovilles, the Budlong produces chicken still bulletproof underneath its slathering of Nashville. That ability to remain crisp is good. Also good, those few fries you fumbled upon in that red carton as a kid. Then, at some point in the not-too-distant past, chefs and restaurateurs and even diner operators came upon the idea of turning all their fries into mistakes. A dingy place in Skokie became an internet food forum sensation for serving old potatoes. Edzo’s in Evanston does their hand-cut fries extra hard. Crisp is it. Except Edzo’s fries would be a lot better if they came out of the fryer a minute or so earlier, as they do at Gene & Jude’s, where the fries are a shining example of limp food.

Too much is sacrificed at the altar of crisp, where things become one-dimensional, all bark and no bite to be both trite and literal. Try instead the fries packed alongside, over and within the World’s Greatest Hot Dog at Gene & Jude’s in River Grove. Their two-dunk frying process, augmented by beef tallow, brings out the sweetness within the potato. You know why Paleos avoid eating there.

Enough with the crunchy, textural contrasts. There is the obvious problem that soft foods are for babies and invalids. A soft-boiled egg and white toast are foods for the barely alive and the almost dead. That’s not the worst. Say limp and the bawdiest amongst us think of the grim role of the fluffer. Move on.

Around the world, many adults don’t mind something jiggling on their plate. The Chinese relish the absolute goo of a sea cucumber or hundred-year-old egg. A great treat you can find in Chicago is in the seldom occupied Richland Center basement food court in Chinatown. In recent years, chefs have convinced diners to eat pork belly with a judicious application of heat. Sear and no one notices all that viscosity. Not at all what they do at the Tientsin stand where they serve pork-head-meat pancake, a truly limp piece of food, a schmear of hoisin providing just enough protection to realize how delicious pork fat can be when it’s not cooked solid.

Skeptical? Who does roast chicken best? How about who does roast chicken best in a bare-bones space shared with a fading Korean shvitz? Peruvians. Peruvian chicken is great because it takes its time rolling over live coals. The meat is moist, the marinade subtle. The skin on the chicken at Fina Estampa, a brasa roja on Montrose, melds into the meat. There are no sounds made in this place beyond what’s on Univision, not even chitchat from your fellow eaters who are stuffing themselves with their golden, smoky birds; they don’t need to converse. You do not pine for crispy skin while eating here.

Finally, the paradigm of soft food remains something elusive in Chicago: a great pastrami sandwich. For more than a century, the process at Katz’s Delicatessen in New York is to barbecue the meat to a strong enough bark that it could win competitions. Then they destroy this achievement through hours of ruthless steaming. Hand slicing reveals the method to this madness. It all comes together, the whiff of smoldering sawdust, the dose of cracked spices, pepper, coriander and a few of something else kept written in a safe. It just melts. That’s what limp food is all about. (Tip your slicer please.)

Like I say, I am not immune to the pleasures of a solid crunch. Still, it’s like the “Saturday Night Live” gag that seemed funny once: it’s been taken too far, this need to make everything crisp. You lose the best flavors. Turning too crisp undermines the nature of what you eat. Instead, if you hit Gene & Jude’s on a Saturday afternoon, when the line is so long it about doubles upon itself, you’ll have the opportunity to watch hundreds of potatoes get levered into sticks, dropped into baskets and moved across two vats of oil. Each batch will come out the proper way. Limp.