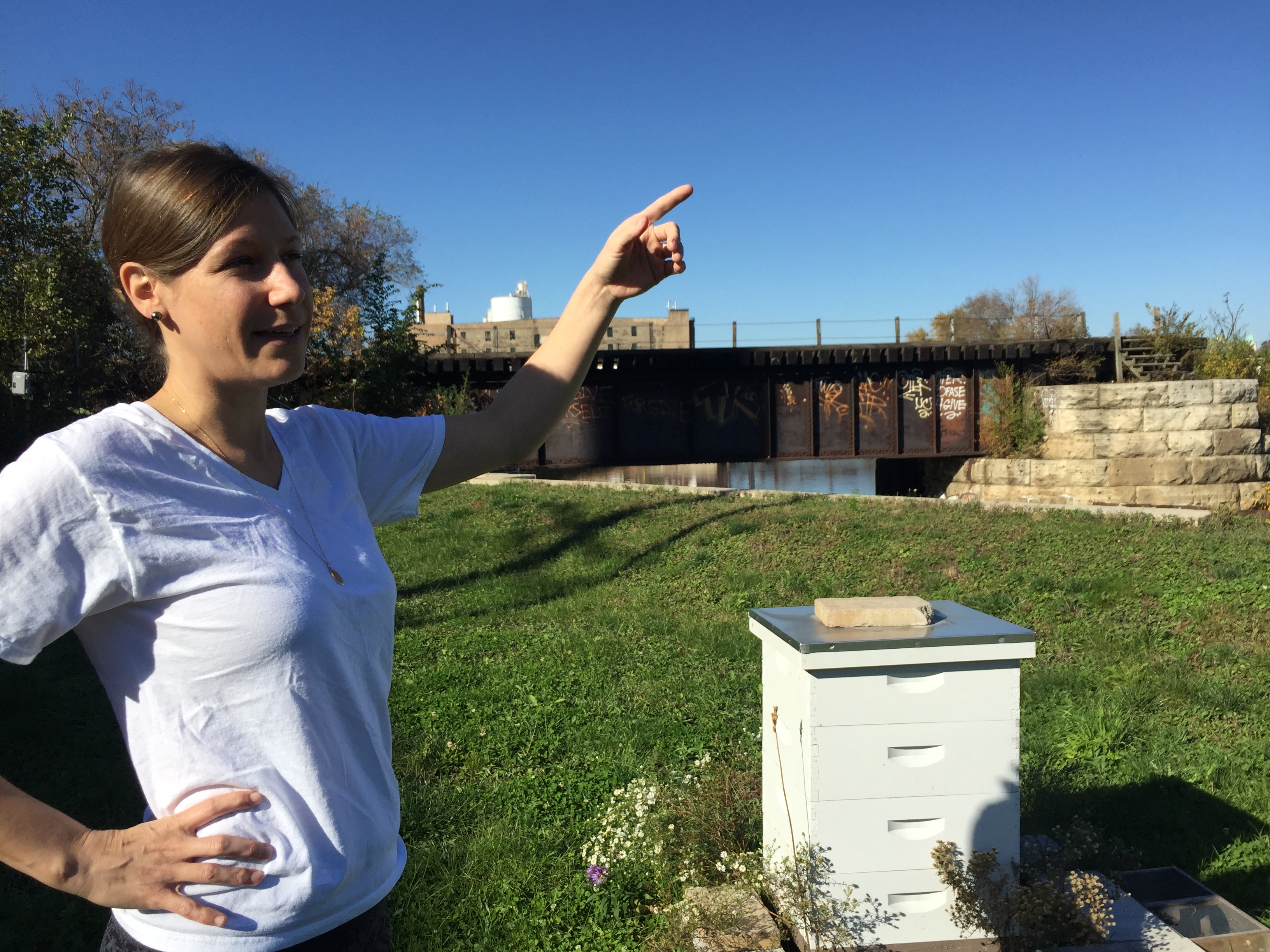 On a curve of the Chicago River, across from an old dumpster and a tagged bridge, sits a little beehive. It’s tended by Jeannine Wise, executive chef of Budlong Hot Chicken. Wise opened this hive, her first, in April, and named it La Colmena Chicago Urban Apiary. But make no mistake—this beehive isn’t just for honey. For Wise, this hive heals.

On a warm Sunday in November, Wise pulls her car up to the beehive’s grassy hill, just down the street from Local Foods, which loaned Wise the land to raise her bees.

“It’s gorgeous,” she says of the area. “Industrial romantic, kind of like those pictures of Detroit.”

Dressed in yoga pants and a white T-shirt, Wise checks in on her beehive, which looks like a white bedside table with four drawers. She puts on a netted hat and gloves and, after smoking the outside to send the bees further down into the hive, carefully removes the top layer. Inside are wooden frames with neatly arranged hexagonal columns of honey, each swarming with bees. As she pries apart the sticky frames, Wise hums “Amazing Grace” to calm the bees.

Some might recoil from the thought of digging into the home terrain of a mass of stinging insects, but Wise is cool. “It’s kind of like, if I sing and I’m nice, let’s coexist. And I just came from meditation, so I’m super blissed out right now.”

Wise was first drawn to beekeeping fifteen years ago. She was lying hungover on the couch, watching the children’s show “Reading Rainbow,” which, that day, was all about beekeeping.

“Before I could change the channel, I felt that spirituality, something was there. I can’t explain what it was.”

Wise started researching beekeeping in Chicago, and through Slow Food Chicago, she came upon the Chicago Honey Co-Op, an agricultural cooperative that works with the formerly incarcerated and others to tend apiaries and produce honey.

After one visit to a Chicago Honey Co-Op location, Wise was hooked. Wise spent nine years volunteering, taking classes, and selling honey at farmers’ markets. She eventually joined the board of Slow Food Chicago, even representing the Midwest and beekeeping at the Slow Food Gastronomy Conference in Turin, Italy.

About this time, Wise also helped open Eataly in Chicago as head chef of two restaurants. Then she became the first female chef of the Virgin Hotel in Chicago. Her work picked up, but she longed for her own hive. After prodding her friend David Rand, the chief operating officer of Local Foods, for space on his lot, she was finally able to open her own apiary.

“I just have to,” she says of beekeeping. “It keeps me engaged with my environment, and it gives me a lot of hope, so I feel like it’s good medicine for me to stay involved.”

Wise, who has been in recovery for a few years, found the beehive to be a great source of healing for herself and for others struggling with addiction. She even sees parallels between the hive and the kitchen—everyone with a job, working toward a common goal, everything mise en place.

“When I looked into a hive and understood the perfect geometric pattern of bee space—everything is calculated, nothing left to choice—I get chills. Sometimes I tear up. It proves to me that my human experience is not random; there’s a point to this. I work with gangbangers and people who have been in prison. I bring people around, and I just tell them my story and what I see in a hive. If I explain to you the sense of peace I feel, maybe it will help you realize you’re not alone either.”

Wise hopes that if her hive does well, she can work with more people who suffer from addiction.

“It all makes sense to me with the prison, addiction, spirituality, steward of the land, sustainability—I don’t know the elevator pitch, but it’s all one thing. It’s all little branches of the same thing. If I get honey that’s great. If I don’t, being a good steward of the land and being able to participate with these creatures, it’s just a privilege.”