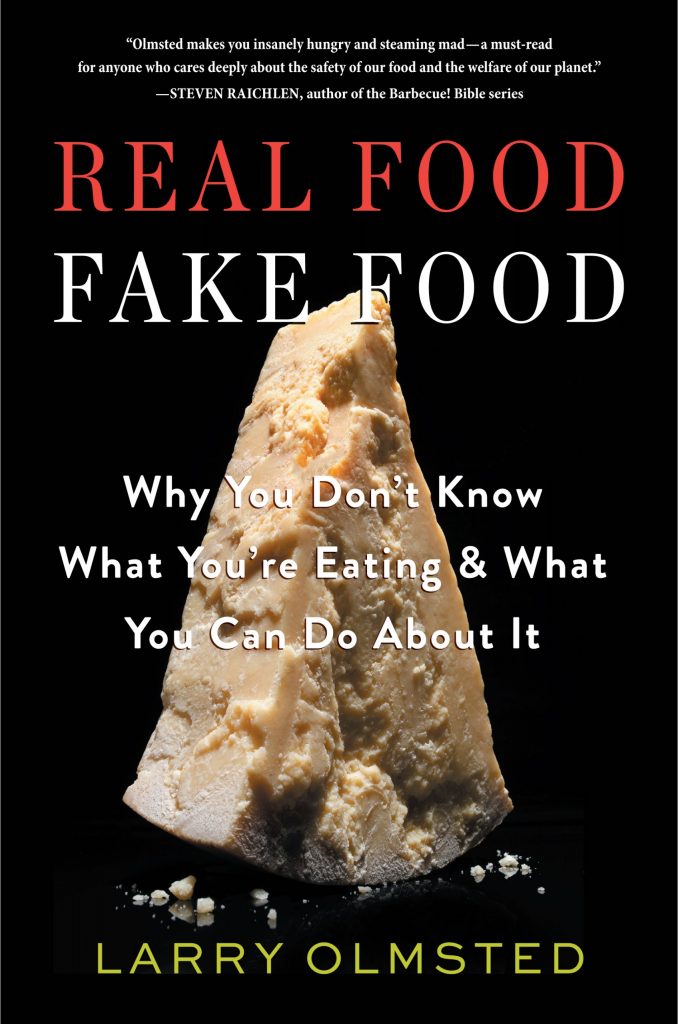 No one likes the word “fake.” We do, however, eat fake food all the time. We might not even know it. In “Real Food, Fake Food,” author Larry Olmsted outlines the ways we’re tricked into eating phony food, and why it might be so bad for us. I had some specific questions for him.

Why is it dangerous to eat fake foods?
There are several reasons why fake foods are dangerous, in addition to the financial cost of being ripped off.

At the more benign end, there can be health risks through omission. Let’s say you choose to eat something proven to be healthy, like extra virgin olive oil, which has demonstrated heart-healthy and cholesterol-lowering properties, along with all sorts of additional potential benefits. If you get a fake, it might not be overtly harmful, but you’re damaged by not getting the health benefits—it’s like taking a placebo instead of real medicine.

Sometimes fake foods go directly against the health wishes of the consumer: lots of people, including myself, want to eat drug-free meat, raised without antibiotics or growth hormones. Real Kobe beef is drug-free by definition, but when you eat fake Kobe, which includes most of the Kobe in this country, it can be raised on massive amounts of antibiotics, steroids and hormones. Same thing when you pay a premium to buy wild-caught salmon and get farmed salmon instead, which happens about a third of the time at retail and two-thirds of the time in restaurants. Farmed fish are grown on antibiotics, vaccines and a manufactured grain diet unlike anything salmon eat in the wild.

Then it gets worse when the fake foods are actually actively dangerous. Extra virgin olive oil, by law, can contain nothing but juice from olives, but if it’s been adulterated with cheaper peanut or soybean oil, which has happened many times, those are very dangerous allergens to many people. In April, the US Congress ordered the FDA to begin testing imported olive oil for just this concern. Farmed fish and shrimp from Southeast Asia and China have been demonstrated to contain antibiotics and other chemicals that are banned in this country for health reasons. To confuse inspectors, these products have been illegally relabeled as products coming from other countries. Chinese honey is sometimes adulterated with a banned drug, a known carcinogen. Species substitution in seafood is common: a cheaper species is sometimes passed off as a more expensive and desirable one, and the cheaper ones can be dangerous, even potentially fatal. Escolar, nicknamed the “ex-lax fish” because it’s widely known to cause digestive distress (and is banned in Japan), is widely substituted for tuna in sushi restaurants. In Chicago, pufferfish, or fugu, was sold to consumers as monkfish, and poisonous pufferfish contains one of the world’s most deadly natural neurotoxins.

When grocery shopping, what are some red flags you look for when trying to avoid fake food?
The word “natural” on a label is a big red flag. Because the FDA has intentionally chosen for decades to not define it and allows it to be used on almost everything, “natural” has become a common way for manufacturers to trick and mislead consumers. Other similar examples would be “pure,” “grass fed,” “green fed,” “humanely raised,” “pasture raised” and other hyperbole that makes the food sound like it is produced better, so it costs more, though none of these words have legal definitions.

Any food with a “geographically indicated” name is immediately suspect. That’s because, while there are strict laws about names in most of the world, they are generally unprotected in the US. Those are foods famously named for places, including Champagne (from France), Parmesan cheese (from Parma), Gruyere cheese (from Gruyere, Switzerland), Burgundy wine (from Burgundy), Kobe beef (from Kobe), San Marzano tomatoes and so on. Anytime you see any of these, you need to really double check the country of origin—real San Marzano tomatoes come only from Italy. It’s easy to buy fakes in this country.

When grocery shopping, what are some green lights you look for when trying to find real food?
Anytime you can buy food in its whole form, do—especially fish. One reason there’s so much fraud is because almost all white fish, once filleted, look the same. If you buy whole fish, you avoid that problem. Nothing can fake a lobster, but processed foods like lobster bisque or ravioli may not actually contain any lobster.

Buy whole coffee beans and you can get only coffee; buy ground coffee and you’re getting a product that has a centuries-long history of adulteration with everything from ground acorns to sawdust. Italy’s Parmigiano-Reggiano cheese is one of the purest and most nutrient dense food stuffs you can buy, so get a wedge—I would never buy a container of ground up “Parmesan.”

As for labels, I actually think the USDA organic is pretty reliable, especially for drug-free meat and poultry (but not seafood: there is no organic standard for seafood even though you see plenty of seafood labeled organic; it means nothing). The European organic standard, Bio, is even better. I also look for the EU’s PDO (Protected Denomination of Origin) logo on foods like Parmigiano-Reggiano or prosciutto di Parma, which certifies it is the real thing from the real place. At the end of every chapter in my book I give very specific labeling advice: for instance, look for Marine Stewardship Council (MSC) certification for wild caught seafood, Niman Ranch for beef and pork, one hundred percent Qualita Italiana on Italian olive oils.

Does real food taste better than fake food—and if so, why?
Absolutely it tastes better. Take Parmigiano-Reggiano, the “King of Cheeses.” By law it can contain only three ingredients: milk, salt and rennet, a natural digestive enzyme that makes cheese form curds. The milk can come only from cows raised drug-free with no antibiotics, and they can eat only natural grass that has not been fertilized or have pesticides applied. It is as pure and natural milk as you can get, and the result is cheese so good NASA chose it as the only cheese to go into space with the astronauts. It is also aged for an average of about twenty months, which concentrates the flavor and makes it more delicious. Buy imitation Parmesan cheese from outside Italy, and it can contain milk that is far less pure, with additives like cellulose, which is a plant fiber similar to wood. It also has no aging requirement at all. Likewise, real Champagne is also made under very strict laws, maybe the strictest of any food, from the quality of the grapes and how they are grown to the length of aging. The quality control is so high that there is literally no such thing as bad real Champagne. Fake Champagne has none of those things and can be terrible. A lot of the “Champagne” produced in this country and labeled “Champagne” costs less at retail for an entire bottle than just the cost of the excellent grapes used to make a bottle of the real thing.

What are some real foods (perhaps foods you’d been eating fake versions of for many years) that blew your mind with their unexpected deliciousness?
At book signings, I have done olive oil tastings and when people who are accustomed to buying big cheap bottles in the supermarket try real extra virgin olive oil of high quality, they are blown away—“I never knew olive oil tasted so good!” I hear that all the time, and I had my own experience like that in Italy’s Puglia region over a decade ago. It’s such a game changer, so dramatically different, that once you try good EVOO you can never go back.

Sushi is a big example: it went from being a very specialized food to a generic food almost overnight: the sushi most people eat in this country is the equivalent of the drive-through fast food burger, something premade in a plastic container. That’s not what sushi is about. It’s about sitting in front of a master chef who carves the freshest real fish to order in front of you, and when you eat that real sushi, the crap most “sushi lovers” eat can’t compare—mainly because so much of it is fake fish.

You don’t seem to assume the posture of an activist, but what do you hope would be the positive social consequences of what you’ve written?
You’re right, I am not, or at least I wasn’t, an activist. I never considered myself one. I tried to be non-judgmental in that I am not telling people to eat a certain way. My thing is that whatever your decisions, whether you’re vegan, or love meat or want to eat cheap or are a gourmet, you should be able to buy what you think you’re actually getting without concern. This is America and we have freedom of choice, but we also expect transparency and the rule of law. I became so infuriated by what I saw, especially with our government agencies either complicit or looking the other way, that I hope the public response to my book will be to put pressure on government officials to fulfill their promises to the public, for the FDA to do its stated job, protecting the health of Americans, and for companies and restaurants with bad practices to clean up. I’d also like to see this country finally get in step with the rest of the world on the issues of geographically indicated foods, which hurt not just American consumers but our best producers. For instance, Napa wine is unprotected in most of the world, and in many countries, anyone can take any crappy bottle and legally slap a Napa label on it and make money at the expense of our winemakers…but that’s exactly what we do to cheesemakers and other food producers from other countries! There are only six countries in the world that don’t recognize Champagne as exclusively French and allow home grown knockoffs. The United States is in that group, which also includes Russia, Ukraine and several former Soviet countries. Even China has better consumer protections! To me, that’s insane.