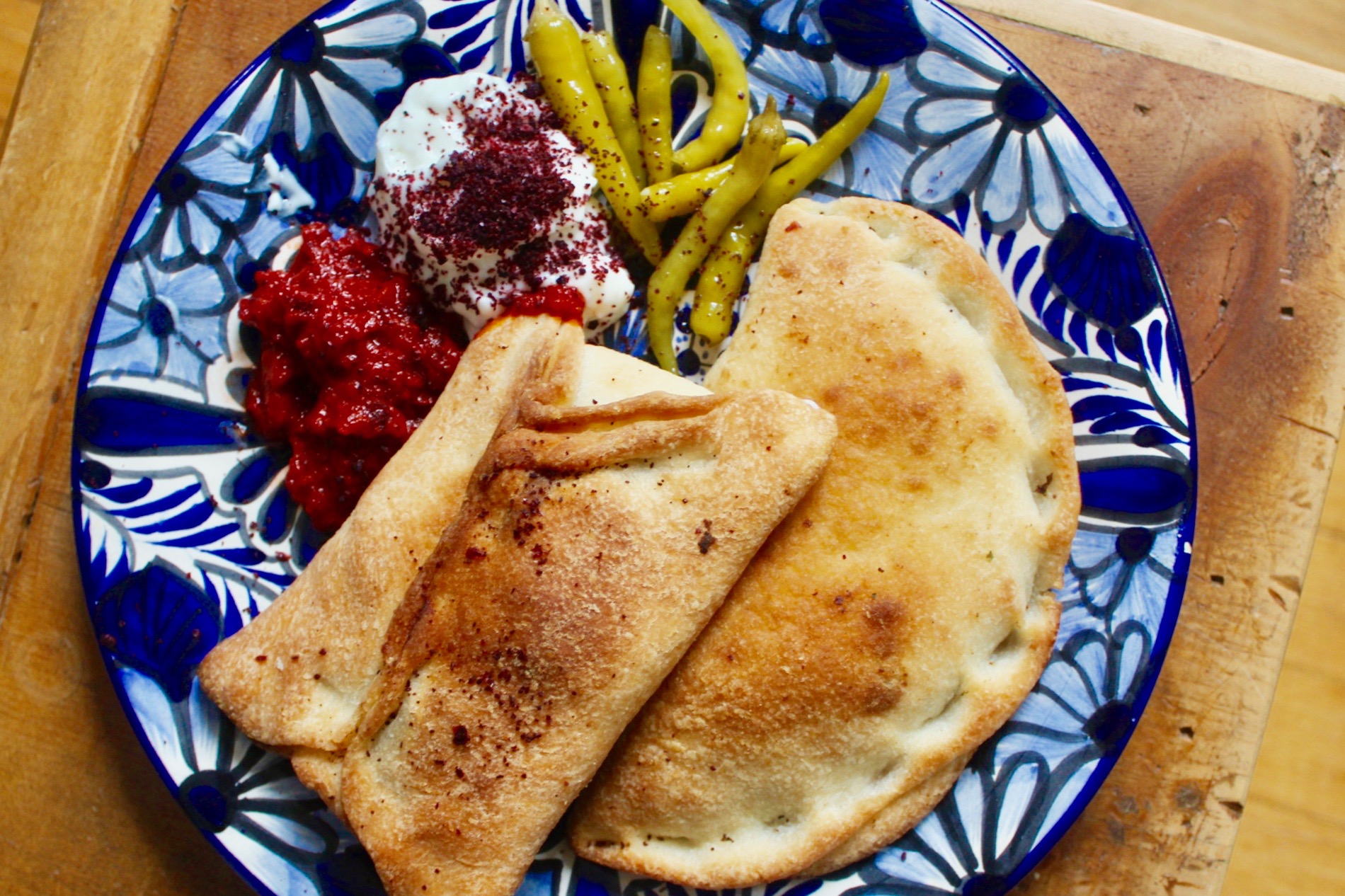 At the northwest corner of Foster and Clark in Andersonville, the painted signage over a bustling storefront proclaims “Restaurant” in three-feet-high Arabic script. No matter that most of the customers to the Middle East Bakery & Grocery (1512 West Foster) cannot read it, they come anyway, in droves, for the lentil soup and the falafel sandwiches. To be fair, the word “CAFE” is helpfully painted behind the Arabic, and a large cartoon of a stack of bagged pitas adorns the main entrance, the words “Middle East Bakery” painted below it. And yet this place is so much more than a bakery. For decades, patrons have come here for the oven-fresh pitas, but also the homemade spice blends, and the aisles of groceries, ingredients and snacks: pomegranate syrup, cracked green olives, Jordanian candied almonds, medjool dates and countless more. 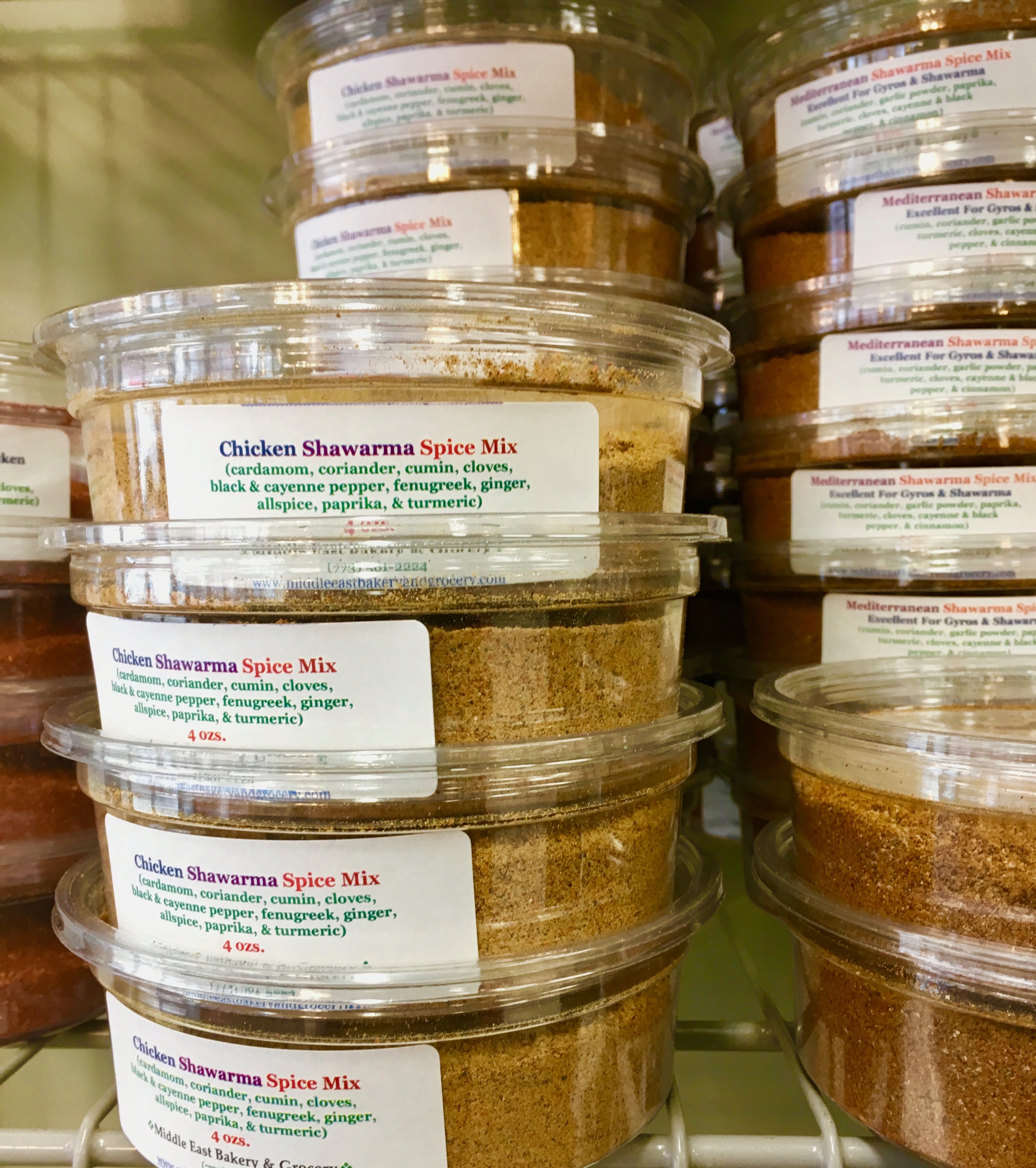 A little before he opened the bakery in 1981, Hisham Khalifeh left the West Bank city of Ramallah to find new fortunes in the United States. Since then, he’s presided over an increasingly popular spot for groceries and prepared foods based on the recipes of his Palestinian heritage and the broader region, spanning from Greece to Turkey, Aleppo to Baghdad, and Cairo to Jerusalem.

The store’s strengths are many: first and foremost is the bakery, which turns out fresh pitas daily, with multigrain and whole-wheat varieties in addition to the traditional style. Hisham shuns preservatives and artificial ingredients, which means the bread is as fresh as it is perishable; get it hot, on the morning of the day you want to eat it. In their basement ovens, they also make a range of savory pies—lamb and potato, artichoke and cheese, spinach and feta, among several others—and kibbeh, spiced beef dumplings covered in bulgur. Although they’re best fresh, the pies freeze well and make an excellent lunch-on-the-go for the busy work week. The bakery also specializes in manaqeesh, a focaccia-like bread baked with za’atar, a traditional savory blend of dried oregano and basil with sesame seeds and sumac. In Beirut, you would grab a manaqeesh, with or without cheese, hot from the oven on your morning walk to work. Fortunately, the bakery sells them in bags of three or four, so you don’t have to show up here every morning.

Hisham blends all of his seasonings in-house and makes them available for purchase, along with just about any spice you might require for a Near Eastern recipe. The Falafel Spice, Shawarma Spice and Moroccan Ras el Hanout blend are lifesavers—and timesavers—when you want to make the dish at home but would prefer to leave the seasoning to the seasoned pros. Hisham’s house blends of grilling seasonings for chicken and fish are must-haves for any pantry; they make an everyday dinner a much more savory affair. Sumac, fenugreek and the aforementioned za’atar are among the many specialty seasonings carried here, as well as a whole range of more everyday spices: anise, coriander, cumin, ginger, nutmeg, mint, sage and the rest of them. Dried and crushed chili peppers are on the shelf, but why not experiment with the bright and potent Aleppo crushed pepper instead?

The shelves of dry goods and groceries are a tour de force of pickles, olives, peppers, preserved dates and brined vegetables. Pantry-stockers will find everything Arab—hummus, baba ghanouj, tahini, fava beans (called foul and pronounced “fool”), hot pepper paste (shatta harra), garbanzo beans, garlic paste, etc., available in cans and jars, but the recommended items are made fresh in-house and available in the chilled section. There, Hisham’s famous lentil soup sells by the quart and often runs out when fiends—myself among them—stock up on six or seven tubs at a time. Garlic hummus, feta spread, hot pepper paste, pickled beets and fresh chopped tabbouleh (a salad of parsley, tomatoes, onions, and bulgur tossed in olive oil and lemon juice) are favorites among the dozens of mezze (Levantine appetizers, served en masse before a meal) prepared daily for take-away. On the far right, a section dedicated to dairy stocks labneh baladi, a thick yogurt, very sour, that contains less lactose than most American varieties. Ayran, a slightly salty yogurt drink popular in Lebanon and further East, is sold in individual bottles or half-gallon jugs. On a warm day, a glass of it in the morning makes breakfast all the better. 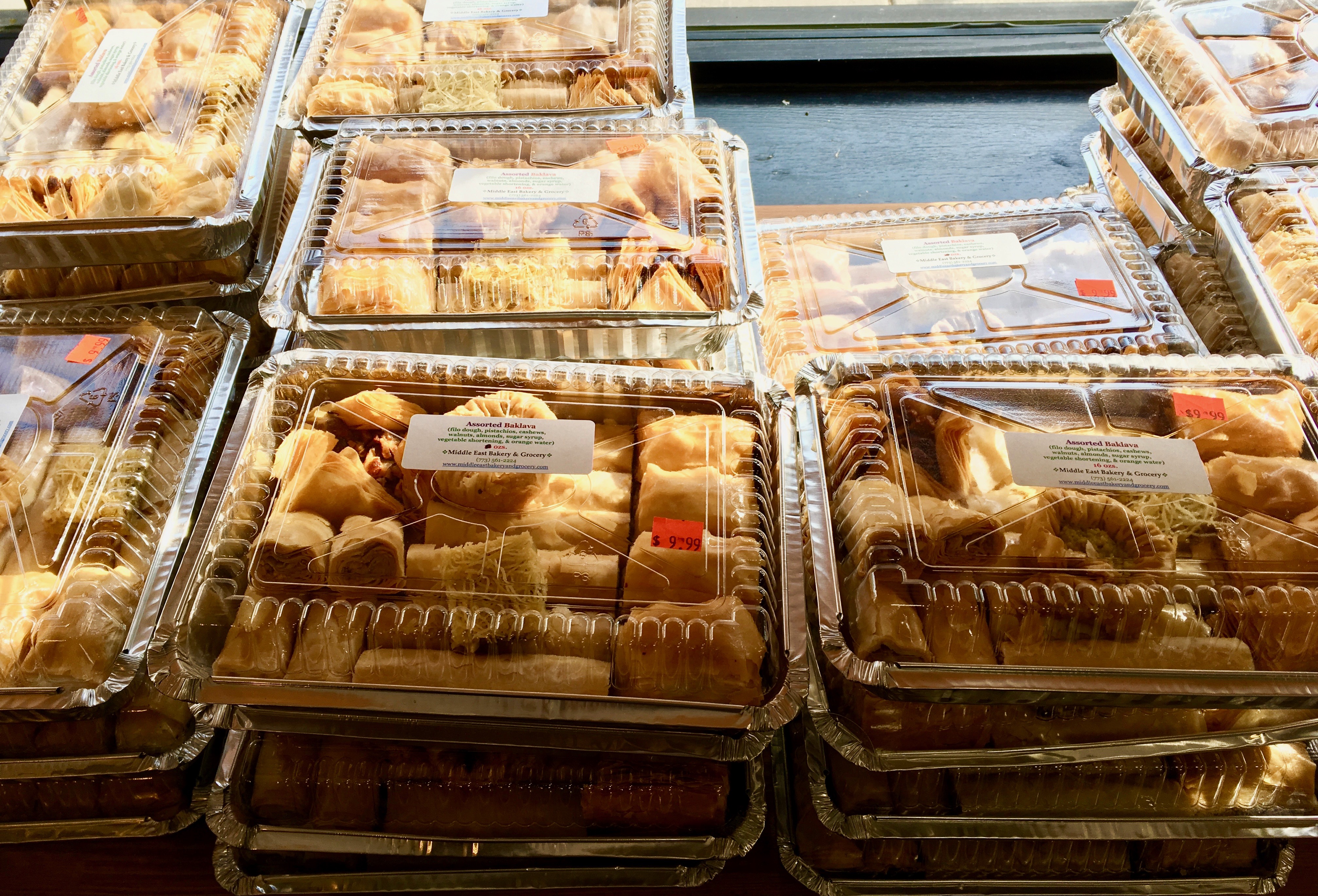 And what to make with all these strange and exciting ingredients? Intermingled amongst the heaps of rice, lentils, beans, bulgurs and couscous are ready-mixed stocks of Hisham’s favorites. The famous lentil soup comes dry in a bag with simple instructions for replicating the magic—easier said than done, says this critic. The bakery has fielded so many requests for the mix from Chicago ex-pats that they are considering how to ship it bulk by mail. Until then, a curious mind and an eager palate would do well to read a few good books: Sami Tamimi and Yotam Ottolenghi’s “Jerusalem” is a lavishly illustrated ode to the unparalleled excellence of the Jewish, Muslim and Christian palates that intermingle in the Holy City; Samantha and Samuel Clark’s “Moro” veers toward Andalusia and Northern Africa, where the seven-century Muslim occupation of Spain gave rise to collaborations of taste that are as delightful as they were at that time unexpected; and finally, Christiane Dabdoub Nasser’s “Classic Palestinian Cuisine,” recently re-released by the eminent Saqi Books, hits closest to home for Hisham’s repertoire, with instructions for fresh salads, savory roasted meats, and comforting rice-based dishes, among others.

To get a sense of what is possible at home, a meal at the adjoining cafe is a sound place to start. Longtime patrons will recall Hisham’s Olive Tree cafe, which predates the current space opened in April of last year. About ten years ago, Hisham closed Olive Tree and rented the space to the owners of Icosium Kafe, an Algerian crepe restaurant that closed in 2014 after a good run. Staying open through two years of piecemeal renovation, the cafe boasts fresh takes on Hisham’s classics—have I mentioned the lentil soup?—as well as a menu of meals newly enabled by the kitchen.

A modest, tidy arrangement of tables line the south window bank and a high counter runs along the east. A long, open grill spans the north wall, where a handful of young men and women perform choreographed cookery, shaving shawarma and chopping tomatoes, cucumbers and red onions. There is nothing on the menu not to recommend, but with some chagrin this critic will emphatically endorse the “shawafel” sandwich, a bit of a bastard thing that mixes falafel and chicken shawarma in a single pita wrap with pickles, fresh salad and tahini. The large bottle of shatta harra on each table will bring the spice up to your preferred level, but be careful to squeeze gently—the chopped peppers have a tendency to bottle up and explode. If, for some reason, you tire of lentil soup, the potato soup does marvels on a cold day, with, of course, a hefty dose of shatta harra. Vegans will delight in the fact that, in both the grocery and the cafe, Hisham never adds animal products unless they’re necessary for the recipe, including the baked goods. Most things vegetable-based tend to be vegan, and everything is clearly labeled as such.

It would be remiss not to mention the extensive array of nuts, sweets and teas available in the grocery for postprandial enjoyment. The Moroccan Mint tea, which is dried mint mixed with gunpowder green tea leaves, is a good approximation of the North African tradition, which is typically prepared with fresh, wild mint stalks; in Rabat, if someone offers you “Moroccan whiskey,” this is what you’ll get. The house blend of Earl Grey and Ceylon is a personal favorite for its subtle aroma and hearty kick.

A few months spent in Beirut and Jerusalem, far from spoiling my appetite for this region, have made me crave the good work of the Middle East Bakery & Grocery more than ever. This corner, home to Taste of Lebanon (1509 West Foster) and the Palestinian-owned Andersonville Wine and Spirits (5201 North Clark), has been my Little Levant for years. For a quick take-away bite, Taste of Lebanon still rules, and its tabbouleh bests Hisham’s for its proper mix of heavy parsley, not to mention its generous portion. If you’ve studied your cookbook well, Elias Bousheh of Andersonville Wine and Spirits will surely give you a good recommendation for a wine pairing, whether or not you’re cooking Middle Eastern fare. Beirut beckons, but the corner of Foster and Clark keeps me well-fed in Chicago. May it do the same for you.