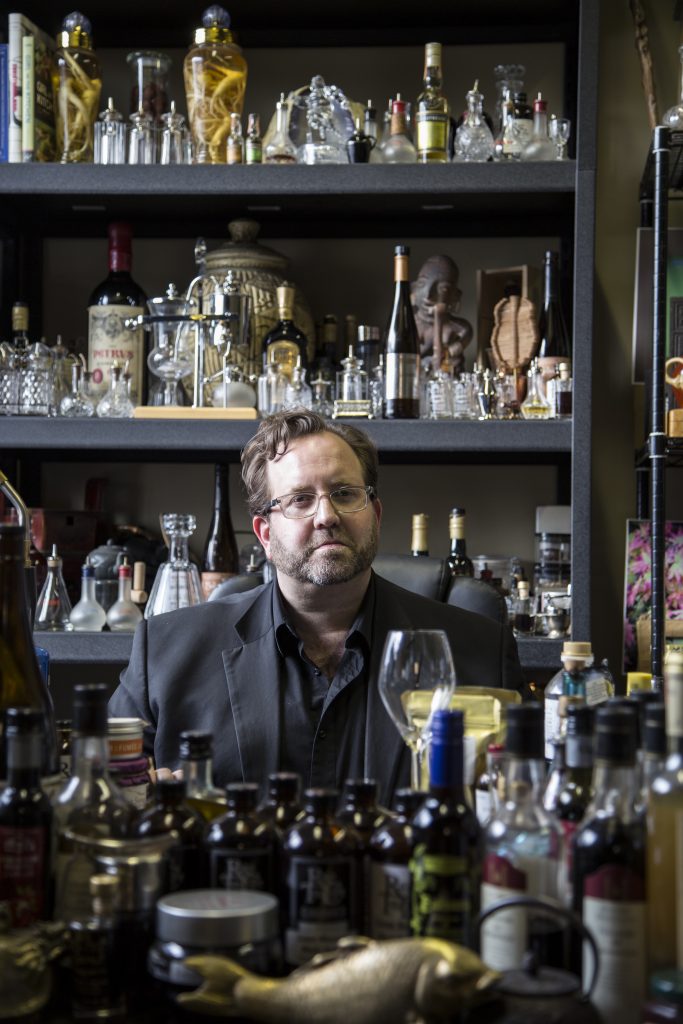 Early last year, we were eating our way through a busy and delicious-smelling street market in Bangkok. I bought a vegetable I couldn’t identify: it looked like green caviar, growing on a stem. Eating a few, I was intrigued by the unctuous pop of each berry, the slightly marine tang of them. I had no idea what this food was and the vendor didn’t speak English, so I posted a picture on Facebook, basically asking “What is this?” My FB friends were generally unsure what it was; finally, Sarahlynn Pablo of Filipino Kitchen identified them as “sea grapes.” On that Facebook thread, a few chefs expressed interest; then Rodrick Markus chimed in that he gets them from Okinawa. Of course, Markus had them in stock.

Visiting Markus at his Rare Tea Cellar on Ravenswood—an emporium of hard-to-find and unusual ingredients—he says, “Sea grapes are a huge item for us. Took us like three years to get through customs. People didn’t understand how we could ship them without refrigeration. What we did was ship them in seawater because the seawater in Okinawa is so clean and so high in minerals that it preserves them. Every three-star restaurant now has either dabbled in them or buys them religiously.”

And that, in microcosm, is what Markus does: he finds exotic and wonderful ingredients most of us know nothing about, and he ships them back to his Rare Tea Cellar and makes them available to chefs who are always looking for new ways to thrill their diners.

With a degree in psychology and hypnotherapy—“I use that education every day,” Markus says—he sits in an office filled ceiling-to-floor with beakers, bottles, tins and other packages of some of the rarest ingredients in the world.

“I don’t know anyone who has as much as we have,” says Markus. “We source from 150 countries.”

I ask Markus to tell me about some ingredients that most of us don’t know exist but that he’s offering, or will soon offer, to Alinea, Grace, Blackbird, Elizabeth and many more of Chicago’s highest-tier restaurants—his clients.

Fleur de neige ($40/100 grams)
Markus pulled out a small tin of salt labeled Fleur de Neige. I sprinkled a few grains on my tongue: incredibly clean salt flavor. I could have eaten more of this salt straight. Markus explains:

“This is one of my favorite ingredients: wind-collected fleur de sel [salt formed on the surface of evaporating seawater]. I’m obsessed with it. Fleur de sel is traditionally very clean, and like most salt, it’s cultivated from natural waters. But, with that method of salt harvesting, a lot of contaminants come into play. With this fleur de neige, wind turbines blow over the water where the fleur de sel is collected, and the salt is caught in mesh nets. You get about a kilo, half-kilo a day. You can get this fleur de neige only at Restaurant Daniel [New York Times three-star in New York] and through me. Half goes to Restaurant Daniel and the other half to me. When I got this salt, I didn’t want to become ‘that guy,’ but I was carrying it around with me: I couldn’t bear to eat other salt. I used to love Maldon salt; now Maldon tastes like it’s manufactured.”

“We wanted to see how coffee would age with the tea. So we sent some lightly ground Sumatran coffee to the guys we work with in Yunnan [China], and they pressed the coffee with the tea, to preserve the coffee and the tea together. To bridge the gap between coffee and tea is always amazing. Coffee being the number-one caffeinated beverage in the US, we decided to see what we’d get. We ordered a thousand pounds, which is a lot, but there’s no way to use these pressing mechanisms unless you’re putting a lot through, because they have to freshly clean it after every run. The cool thing about pu-erh is that it absorbs every flavor: the coffee aroma becomes one with the pu-erh: bright coffee notes and the muskiness of the tea. It’d be great after dinner or if someone ground it down for a rub.”

Magnolia aperitif ($28/bottle)
Markus had a few bottles of vermouth on his desk, created with Chicago spirits maven Adam Seger. He’s bringing tea into the mix there, too. This time, oolong.

“Oolong is scented with wild magnolia flowers: they take the oolong leaves, bring them into a massive barn, and then in the middle of the night, they take in heaps and heaps of magnolia flowers, which open up so the scent travels into the tea leaves, and then the heap is stirred to allow the aroma to sink in. After that, they pick out each magnolia flower from the tea, one by one, and they repeat that process until the flower’s scent is driven into the leaves. Takes about twelve cycles. This oolong is made in Anhui, China, which is one of the few places in the world where you can get enough magnolia to scent tea like this. This is a very traditional technique, and it captures the aroma of a flower with a very short lifespan. Then we make a distillate of the tea and wine; it will be on the market in about two weeks.”

Fresh wild African cola nuts (Price pending)
Honestly, though we’ve had our share of Coca-Cola, Pepsi and RC, we were not entirely certain what cola was actually made from. Turns out, it’s nuts. Of course, Markus has just taken shipment, though at this point even he is not sure what chefs will do with them:

“I didn’t know if it would be logistically possible to get these cola nuts out of Africa and into the US. Fruit is the hardest thing to get out of a country. Now, we can do it, and people can use these cola nuts to make their own soda, tonic, tincture. It’s fascinating to see what people will do with it. And a lot of people order from us every week, so we spread stuff like this around and see what will hit. Like Chef Katsu [of the Japanese restaurant of the same name], every time I get some new wild mushroom, I send him some to play with. He’ll put it in rotation on the seasonal menu. I like people who are not scared to try stuff. I love when people play.”

100-percent cocoa paste ($25/pound)
If, as a kid, you ever ate bakers’ chocolate or some other form of unsweetened chocolate, you know that it’s almost always not awesome. So I was a little wary when Markus offered me a taste from his tin of 100-percent pure cocoa pastilles.

“You can really tell great cocoa when you eat it, and this is 100-percent cocoa. There’s no sugar, no vanilla. And now, they’ve made it into a paste, and I think this is the new frontier for chocolate; we’re getting our first shipment today. With this chocolate, they use high-quality beans and fine tune the way they grind and roast it. And because it doesn’t have sugar, you can use it in savory applications.”

Wild fig leaf tea ($90/pound)
Rare Tea Cellar, as the name implies, originally dealt mostly in teas. Markus is a master of blending teas, sometimes with other teas and other times with something altogether different.

“These fig leaves are grown in Bulgaria, dried for us in Germany. When you dry it, you lose about ninety percent of the volume, so if you have a hundred pounds, you get about ten pounds of tea. This hasn’t been released yet, but we’re experimenting by aging it with cocoa nibs to see how it turns out. Tea is so porous, it absorbs anything. Like, if you wanted ‘burger tea,’ you could get that by just leaving the tea open in a burger joint. Chocolate and vanilla are so expensive now, and people are using a lot of synthetic flavorings. Anyone who says they’re using Madagascar vanilla either bought it four years ago or is lying. We found that when you roast cocoa nibs, the flavor is beyond vibrant, and it brings to the tea the most chocolatey flavor imaginable.”

Wild white strawberries ($20/100 grams, wholesale)
Markus left his desk for a moment and came back bearing a shipping container of small white berries, beaming like a proud father displaying a newborn.

“I had these strawberries in France and fell in love with them. And we’re always trying to bring in something fresh that’s totally over-the-top and that no one else is doing. These are about as over-the-top as you can get. The white strawberries taste a little different than red; they have a pineapple-apple character to them. They’re totally ripe; picked in the wild; chilled and sorted into white and red—the two varietals—and then the white ones are shipped to us on Air France. In about seventy-two hours, they’re here. Right now, they’re on the menu at Sixteen, Oriole and Next.

Before I left Rare Tea Cellar, I asked Markus what he thinks of “civet coffee,” the Southeast Asian coffee “naturally” processed through the digestive tract of this Asian/ African mammal that reportedly has well-developed anal scent glands. “I wouldn’t say it’s the number-one way to ferment coffee,” he understates, “but it’s fascinating. There are a lot of ways to ferment coffee and tea. I love anything weird and different. Right now, I’m obsessed with open-cask soy sauce, where the soy sauce is fermented in huge open barrels. The yeasts are alive and the sauce is bubbling. The sauce reduces down, so that in ten years, one-hundred gallons will be about two-to-three gallons. And that’s exciting. Only a couple people on earth do it. Timeless artisanship: I can’t get enough of it.”