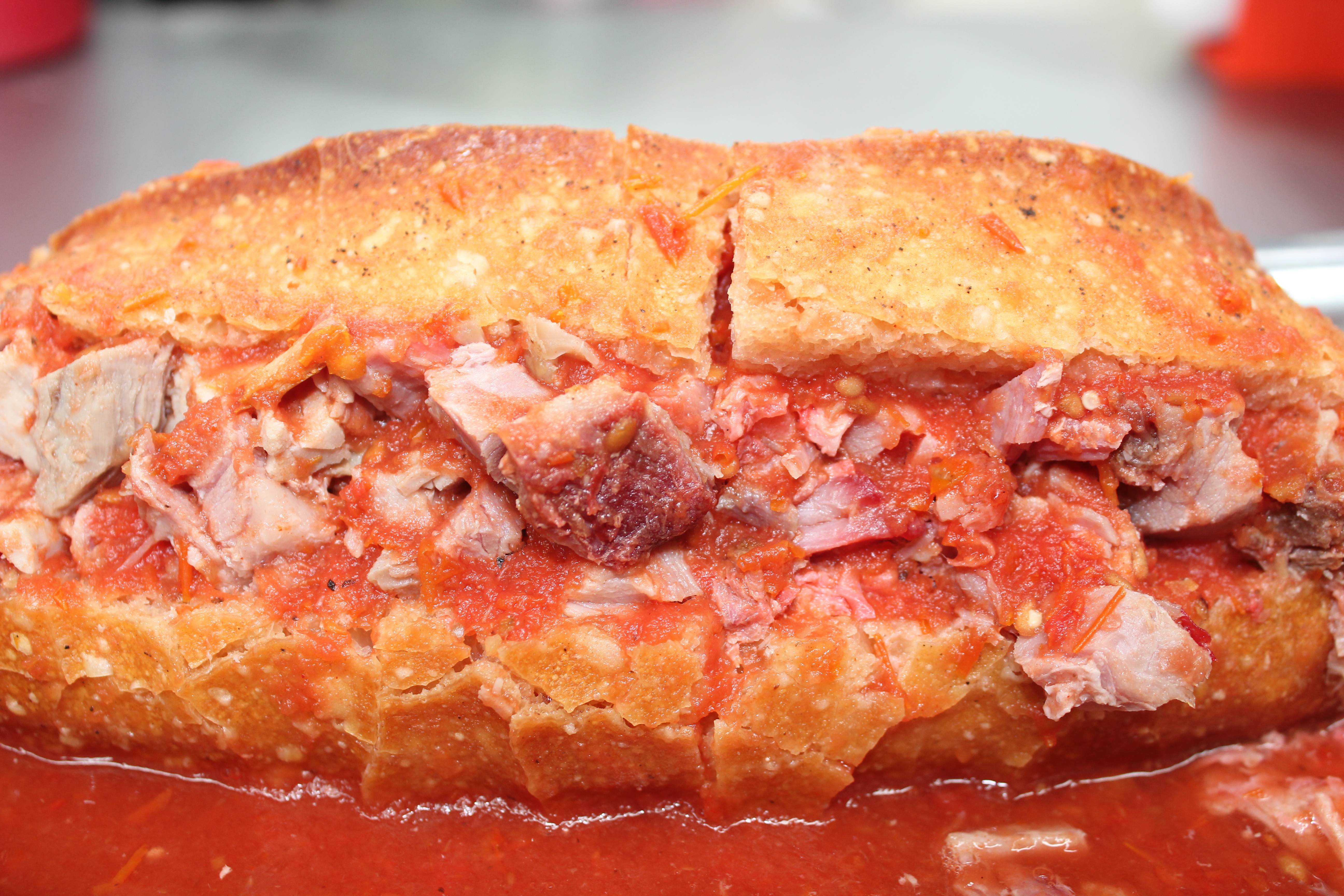 Many people from the Mexican state of Jalisco live in Chicago. Some of them open restaurants and serve traditional Jalisciense food and drink: torta ahogada, birria, carne en su jugo and tequila. In Guadalajara, Jalisco’s capital, I went in search of these consumables to see how their native representations compared with the same as served in Chicago. The results surprised me.

Chicago’s Maxwell Street Market, now located on Des Plaines between Roosevelt and Harrison, is one of Chicago’s richest resources for Mexican street food. It was at Maxwell Street Market that I had my first torta ahogada, literally a “drowned sandwich.” This street snack is a tasty mess: a crusty white bread roll—called a bolillo, brought to Mexico during the French occupation—filled with meat (typically carnitas, little pieces of pork) and drenched in a tomato sauce that’s sometimes spiced with chile de árbol. The traditional sandwich is frequently garnished with onions, cilantro and chilies. There are genteel versions on the menu at fancier places like Rick Bayless’ Xoco, where the sandwich is cut in half, the two sides balanced in a pool of sauce.

Guadalajara is considered the home of the torta ahogada, and although the soaked sandwich is served elsewhere in this Mexican state, it’s associated with this city much as Italian beef is associated with Chicago, even though you can get Chicago’s own beef sandwich elsewhere in Illinois. Immediately after arriving in Guadalajara, I headed over to Mercado Libertad, a mammoth shopping mall of little shops and stands, a good portion of them serving food. After strolling through the market checking out the drowned sandwiches, I settled on a small shop, ordered a torta ahogada and had my first food revelation on this trip: the traditional sandwich of Guadalajara is usually served with a spoon. This makes great sense, though it’s not served that way at Maxwell Street Market (because you need a metal spoon to slice through the soaking bread; and at the Chicago market, there are only plastic utensils) nor at Xoco (because half the sandwich there is sauce-free, dry, enabling you to pick it up easily with your hands). The meat served on the torta ahogada at many stalls at Mercado Libertad was roasted and chopped pork, not carnitas, which like French confit is meat cooked in its own fat. I much prefer Chicago-style carnitas, and the tomato sauce in this Mexican version seemed a little one-note. Overall, I liked both the Maxwell Street Market and the Xoco versions better than the one I had in Guadalajara, the birthplace of the sandwich. Strange, no? Perhaps the “authentic” version of this sandwich is not as desirable as you might expect. 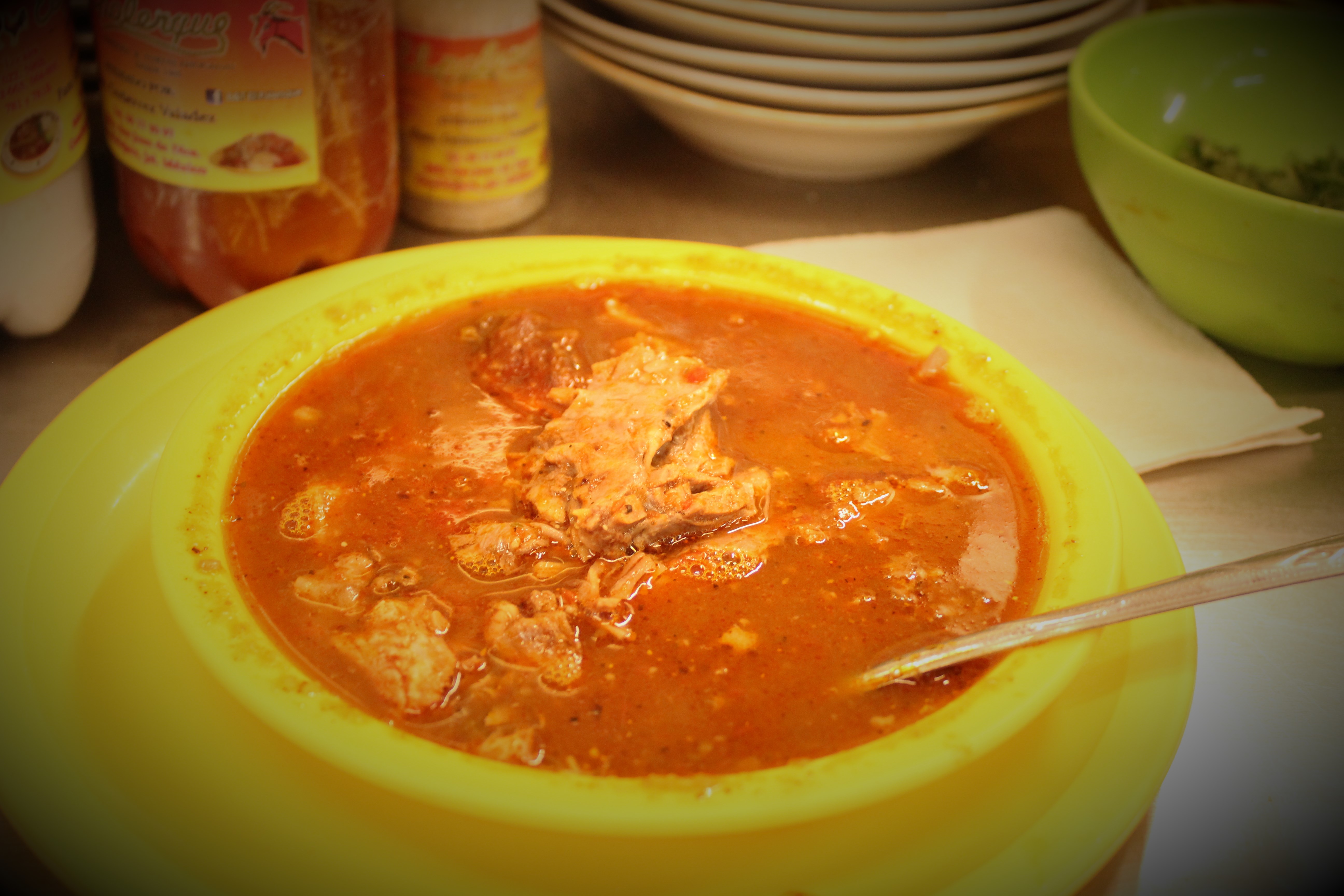 When people find out that I write about food, they frequently ask, “What’s your favorite restaurant?” That’s a tough question, so my stock and sincere response is Birrieria Zaragoza. Owned by the Zaragoza family, who were featured on the cover of Newcity’s 2016 Big Heat issue, Birrieria Zaragoza offers pretty much one menu item: goat, which you can have on a plate or in a taco. Zaragoza’s goat meat is prepared tatemada style: first the goat is steamed and then smeared with a chili ancho-based mole paste before roasting, rendering it tender and luscious. We’ve had birria at a number of places around Chicago—including Birrieria Estilo Jalisco and Birrieria Reyes de Ocotlan Restaurant, both of which we like—but no one seems to do it better than the Zaragozas, who are from Jalisco.

At Mercado Libertad, the massive market in Guadalajara, I snagged some birria, also tatemada style. This birria was served in a bowl of spicy broth ladled over the fatty meat just before serving. Like the torta ahogada, birria was served with a spoon, a plate of warm tortillas, and bowls of onions, cilantro and radishes to spread on top.

Again, I liked the Chicago version more. The bowl of birria I had at Mercado Libertad was good, but the birria prepared by the Zaragozas is spicier, meatier and the goat more delicious—due perhaps to the fact that they source their organically fed goats from a high-quality local supplier. This focus on quality is reflected in the price. My bowl of birria in Guadalajara, with a lot of consommé, was $3; a similar plate of birria at Birrieria Zaragoza is $10.75 and then an additional $2.50 for extra consommé, four times as much, and way worth it in every way. 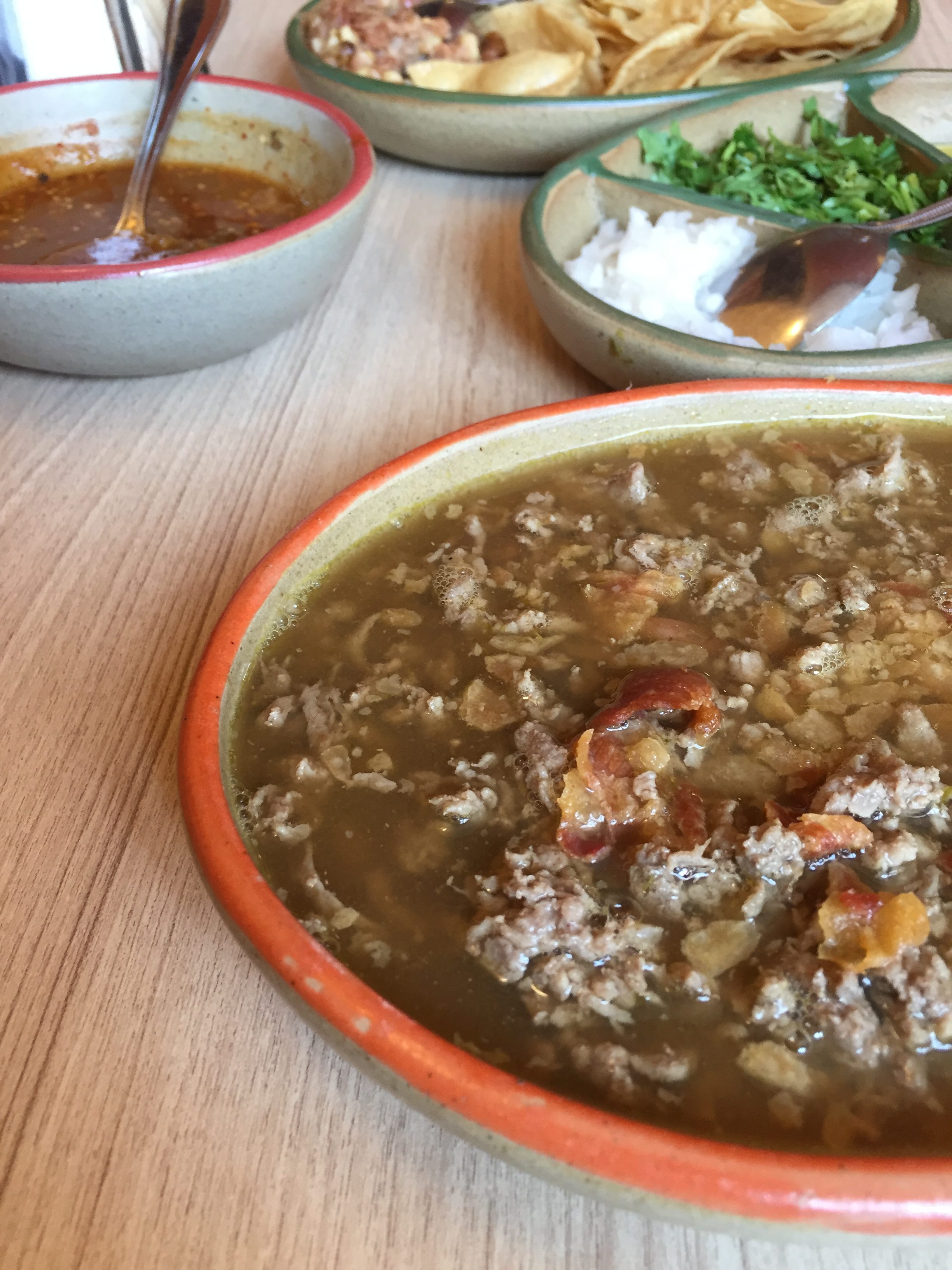 Carne en su jugo, “meat in its own juice,” is a marvelous soup, frequently using some cut of beef, like flank steak, in a spicy broth with pinto beans, chilies and bacon, either crumbled or cut into small slices. I’ve greatly enjoyed carne en su jugo at a number of Chicago-area restaurants, including Los 3 Gallos in Melrose Park.

Some time ago my friend and sometime Mexico travel buddy Rob Lopata did an exhaustive survey of places in the Chicago area that serve this Jalisciense soup; he posted his findings on LTHForum.com. The variety of ways this traditional food is prepared—sometimes with meat, sometimes with vegetable broth, with either red or green chili, poached or grilled bacon—presents a challenge to anyone who thinks they can locate the “authentic” version of Jalisciense soup.

John Zaragoza recommended that I try Guadalajara’s Karne Garibaldi, so I gave it a shot, and man, it just wasn’t working for me. Compared to carne en su jugo I’ve had in Chicago, the broth was vapid, the chopped pork was spongy, and the bacon tasteless, and there simply was not much going on in the bowl.

The Pizza Cognition Theory and Its Variants

So what do I make of the miserable luck I was having finding good versions of typical Jalisciense dishes in Guadalajara?

There are several explanations: 1) I have no taste (possible, but I’m going to give myself the benefit of the doubt) 2) I picked the wrong places (possible) or didn’t draw from a large enough sample (absolutely true, but how big is big enough? Who knows?) or 3) it’s all attributable to a variation on the Pizza Cognition Theory.

The Pizza Cognition Theory, propounded by Sam Sifton of the The New York Times and articulated here by Ed Levine of Serious Eats, goes like this:

“The first slice of pizza a child sees and tastes (and somehow appreciates on something more than a childlike, mmmgood, thanks-mom level), becomes, for him, pizza. He relegates all subsequent slices, if they are diffe­­­rent in some manner from that first triangle of dough and cheese and tomato and oil and herbs and spices, to a status that we can characterize as not pizza.”

The first versions we have of specific foods—pizza, torta ahogada, etc.—become enshrined as the paradigm of that food, the model to which others aspire to and, more often than not, fail to achieve.

I had torta ahogada, birria and carne en su jugo many times in Chicago before I ever tried them in Jalisco. Those Chicago versions (if that’s what they are) have become—for better or worse—the ones I know and crave. I’m not saying they’re the best; they’re the ones I perceive to be tastier than their native counterparts. 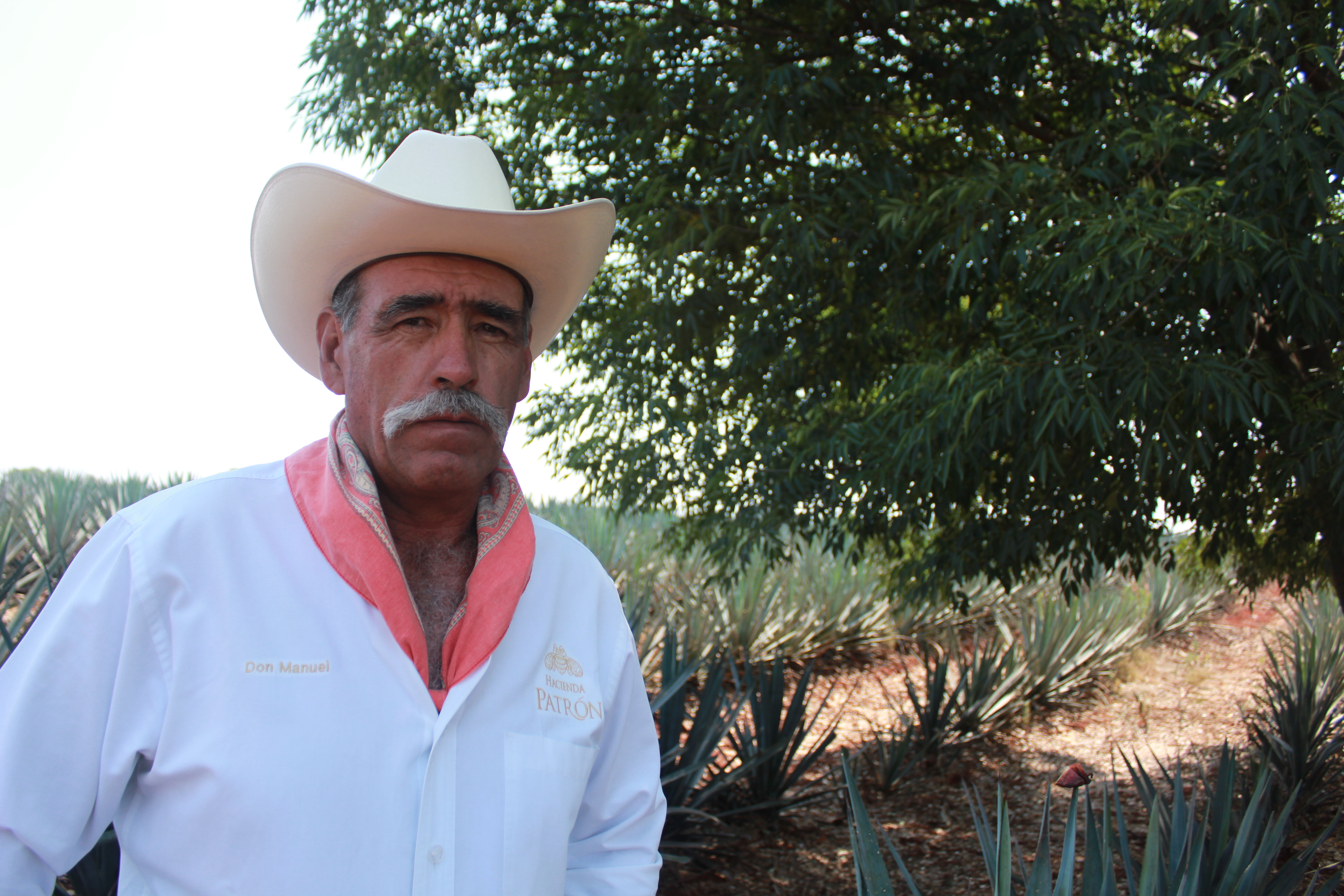 One of the best things I had in Jalisco was tequila, the distilled spirit of the blue agave, and the signature beverage of Jalisco, where the city of Tequila is located. Tequila is probably the most popular consumable from the state, and tequila is served, one might conservatively estimate, in pretty much every damn bar in the United States.

Unlike those uncertified mezcals (or, to be perfectly correct, “distilled agave spirits”) that I brought back from Oaxaca, most of the tequilas of Jalisco, certified and rigorously regulated, are undeniably consistent, which makes them good for using in cocktails at bars that demand a predictable personality.

Tequila, contrasted with mezcal, has been widely industrialized, using up-to-date technologies suitable to large-scale production. I asked Maria Lehman of Breakthru Beverage Group if in this process, tequila has lost anything. “The marriage of modernization and tradition has resulted in a net gain for tequila,” says Lehman. ”There are many different approaches to producing tequila and in some cases there are some brands that to deliver their one-hundred-percent agave in a hurry and at a very low price, compromise quality.”

The tequila I enjoyed the most on this trip was one that’s currently unavailable in the United States, except in some duty-free stores; it’s Patrón Sherry Añejo, a tequila aged for two years in Oloroso sherry barrels. Being a sucker for the Macallan, a Scotch whiskey aged in sherry barrels, I liked the vanilla and sweet woodsy notes in this Jalisciense spirit, which despite the barrel aging let the essential agave notes shine through. Now what I’m curious about is, when Patrón Sherry Añejo is offered in the United States, will I actually like it more than the sips I had of it in Jalisco. If that does happen, I will definitely need another taste cognition theory.