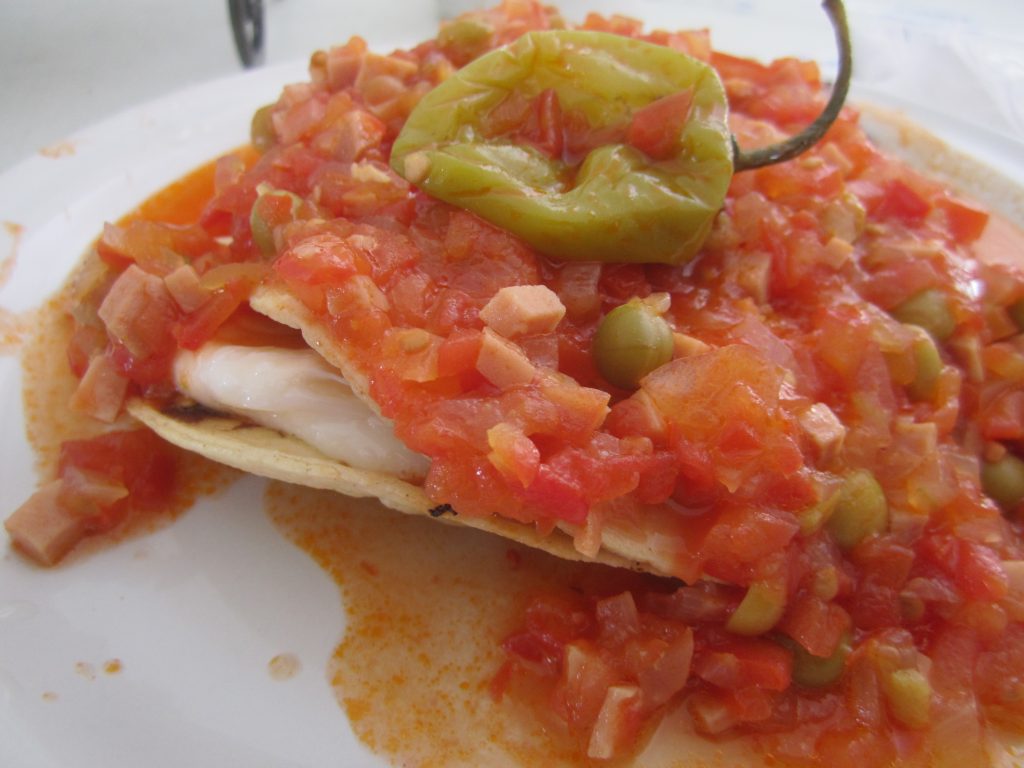 Periodically, the Chicago area has had a Yucatecan restaurant, perhaps most notably Xni-Pec, which was started by the Contreras and Cardenas families in Cicero, appeared on “Check, Please!” before moving to Brookfield, winning two Michelin Bib Gourmand awards, and then closing a few years later in 2013.

Right now, it’s not difficult at all to find cochinita pibil, a lightly spiced, slow-roasted pork dish characteristic of Yucatan, at places like 5 Rabanitos Restaurante & Taqueria in Pilsen and, perhaps unsurprisingly, at Cochinita Taco on the Northwest Side. 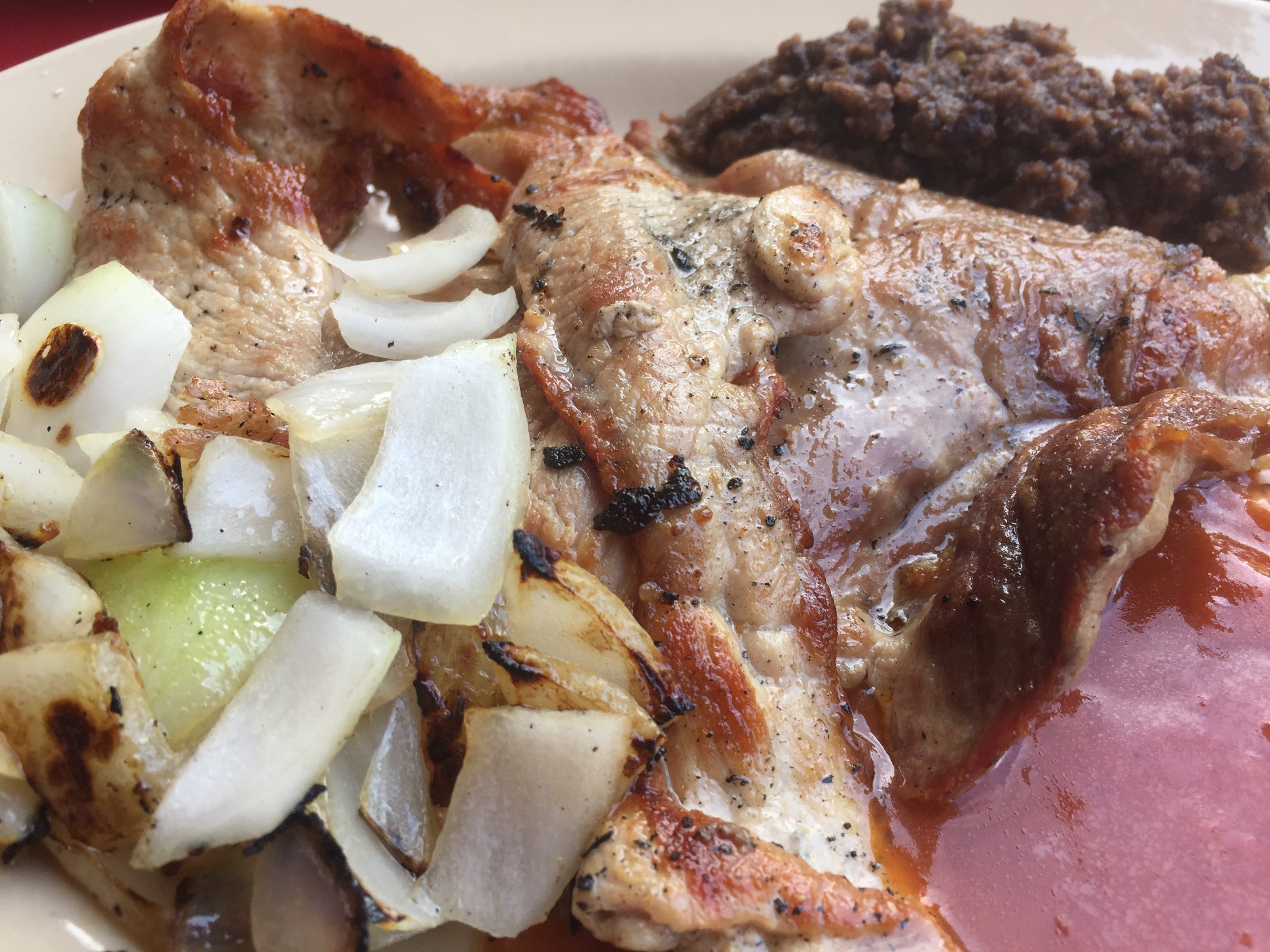 Poc chuc, another Yucatecan dish of grilled pork, can be had at North Side places like Taco Joint and Adobo Grill. Like cochinita pibil, however, poc chuc could not be more than 500 or so years old, as pigs were brought to Mexico by the Spanish. Much Yucatecan food has a lineage much longer than that, and the stupendous stone cities that still stand in this part of the world are testament to the huge populations that used to live on this peninsula. Urban centers like Uxmal are estimated to have had populations of about 25,000, which around 900 CE made what is now an archaeological zone perhaps the largest city in North America.

Still, when you mention “Yucatán” to gringos, you can’t be sure you’ll get more than a blank stare.

Yucatán is one of the most mysterious and beautiful parts of Mexico. Though the Mayan empires vanished long before Spain’s frenzied conquest began on the peninsula, there are still a lot of people in states like Yucatán, as well as peninsular neighbors Quintana Roo and Campeche, who speak Mayan as a first language; in small towns, it’s sometimes the only language spoken.

Many foods still found in Yucatán were eaten for millennia before the European invasion. Tamales, for instance, have been dated to as early as 7,000 BC, and they frequently use ingredients that were as available then as they are today: corn, meat, chilies and leaves of corn or banana. 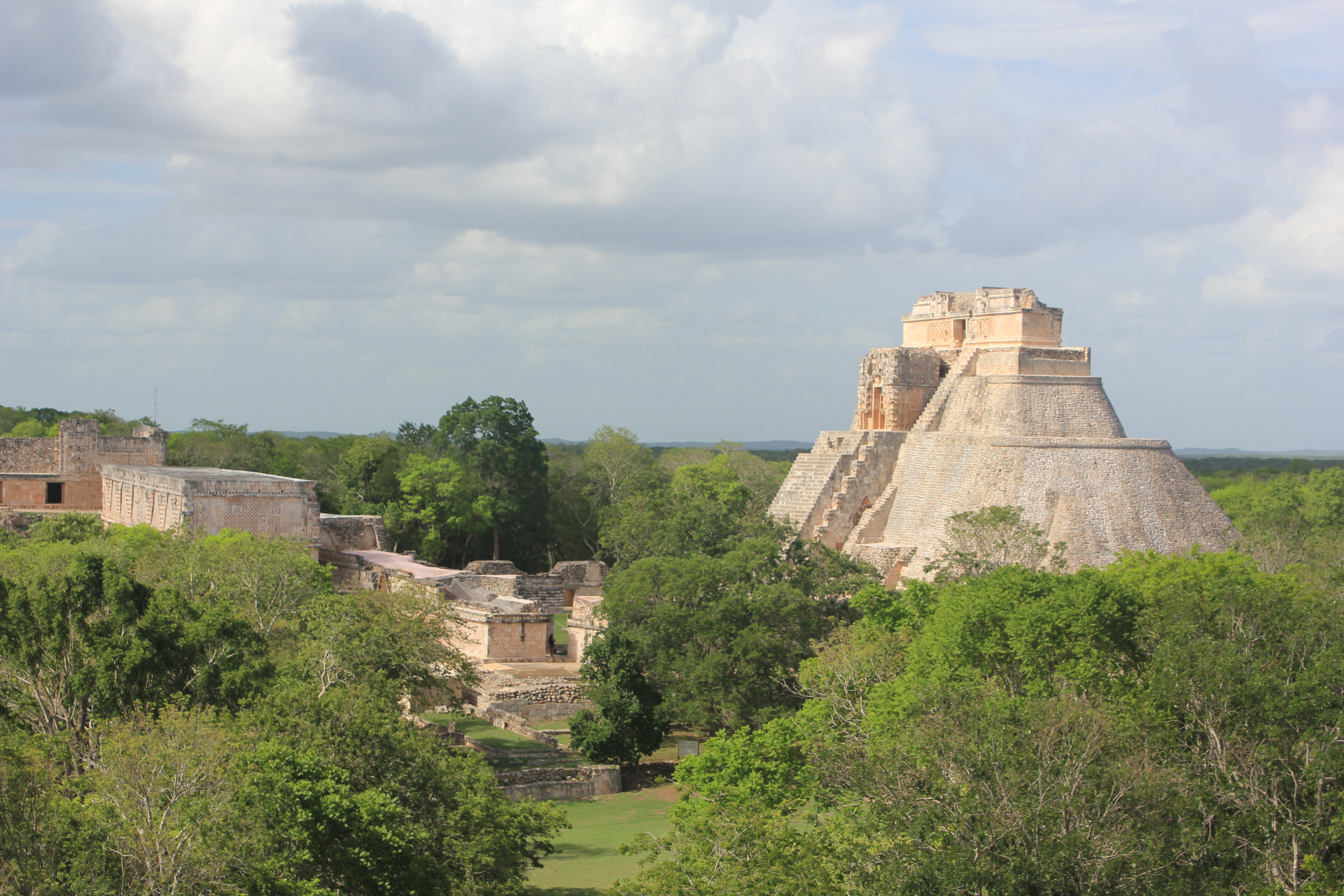 Brazo de Reina (“arm of the queen”) is a kind of Yucatecan tamale roll, a long cornmeal cake containing ingredients like poultry and egg, cooked in a banana leaf, and sliced into portions before serving, sometimes with sauce. What makes Brazo de Reina so interesting is that it contains chaya, an ingredient you’ll find pretty much nowhere in Chicago. In Brazo de Reina, the chaya is ground up and mixed into the corn masa.

Chaya is the stuff of local folklore. Years ago, headed along the horridly misnamed Riviera Maya, a local mentioned that his grandmother used to sing to the chaya while it was cooking “so that,” he said, “it would not hurt me.”  Our theory about this is that chaya, because it (like potatoes and lima beans) must be cooked to neutralize some inherent toxins, needed to be boiled for a specified amount of time (the length of a song, say) to ensure it had been rendered non-toxic.

In Yucatán in mid-June, our driver Angel Ku tells us that the chaya plant has tiny thorns that will embed in your skin if you don’t treat the chaya plant politely. So whenever he picks chaya in his backyard, he says to the plant, “Excuse me little chaya. With your permission, I would like to take some leaves to eat.” When he treats the plant with the respect it deserves, he tells us, he gets no thorns in his hands. It’s magic.

We understand there are currently some start-up chaya operations in Texas but have yet to see any chaya for sale at Maxwell Street Market or any Hispanic groceries in Chicago.

Like many lesser-known Mexican dishes, Brazo de Reina has been served at Frontera Grill, with Swiss chard subbing for chaya, which is about as close to the original dish as you’ll get in Chicago. Truth be told, the chaya flavor is very mild, so subbing in Swiss chard would hardly be noticed (though admittedly the resulting dish may lack some magic). 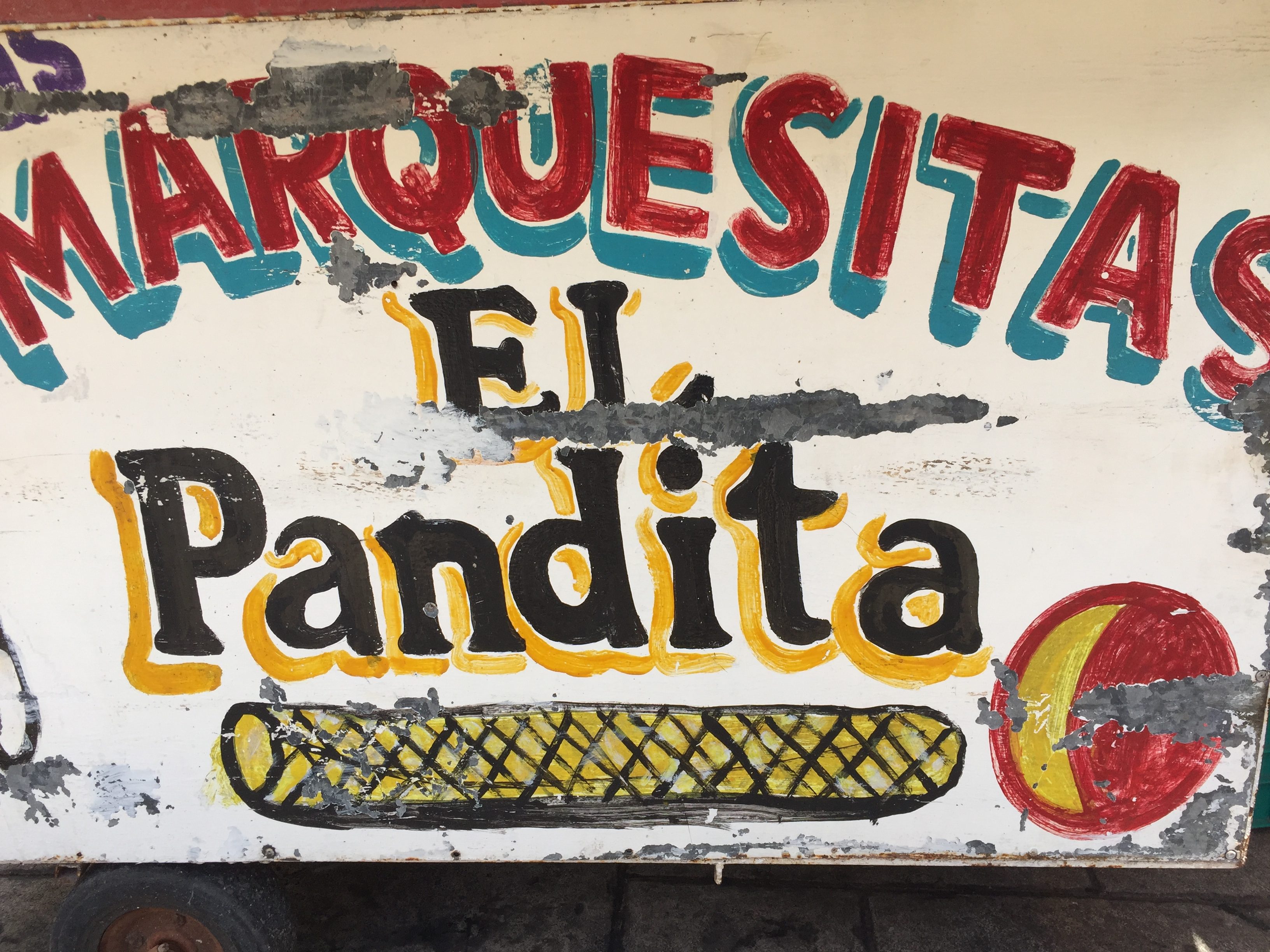 Marquesitas seemed to be the most popular street treat sold on the central square in Mérida, the capital of Yucatán, at their Sunday market; of the forty or so vendors there, perhaps ten were selling marquesitas.

The two ingredients—the crepe and the Edam cheese—reflect the region’s heritage.

The French, of course, briefly ruled Mexico under Maximilian starting in 1864, and it’s the French defeat at Puebla that we celebrate on Cinco de Mayo. Maximilian faced a firing squad, but despite that kind of thing, French culture is revered in Yucatán. The broad boulevards of Mérida’s Paseo de Montejo are modeled on the Champs Elysees, and the French culinary tradition is reflected in some food items such as the French-bread-like bolillo and the crepe for Marquesitas.

Edam cheese holds a strong attraction in Yucatán. The story is that a Dutch ship once ran aground off the coast of Yucatán; it was filled with waxy red balls of Edam cheese, which floated to shore, were collected by locals and soon became a favorite cheese. The enduring popularity of this cheese can also be traced to the days when Yucatán was a major source of sisal (an agave fiber used in rope and matting), and Holland was a major trading partner.

Whatever the reason, Edam cheese is in lots of stuff; it’s the American cheese of Yucatán: inexpensive, not aggressively flavored, and everywhere.

“Relleno Blanco,” as even a gringo with high school Spanish can figure out, means something like “white filling” or “filled white.” Although it’s very likely that Rick Bayless has made this very common Yucatecan preparation sometime in the past, it doesn’t, to the best of our knowledge, show up on any other Chicago menus.

Relleno Blanco is turkey (usually breast), a turkey sausage (filled with hard-boiled egg), and a sauce of capers and raisins, which it’s safe to assume are reflections of Middle Eastern immigrants (mostly Lebanese and Syrian) to Yucatán.

Relleno Blanco also features Edam cheese and it can be served on a plate or, as we saw it a few times, on a tortilla.

There’s also a Relleno Negro, without the capers and raisins, in a dark sauce. Turkey is the key protein, and although the Thanksgiving bird may seem a little out of place in Mexican cuisine, it was indigenous to the Americas, and it was consumed, along with deer and chicken, by the Mayan long before Cortés, Montejo and the other conquistadores crashed into their world.

Our driver, Angel Ku, laughed a little when we asked to go to Motul, some miles north of Mérida, to have Huevos Motuleños.  “You can get them anywhere in Mérida,” he said, and he was definitely right. Still, I wanted to go to the source because when we’d been to Motul in 1980, we had them and found them to be one of the most delicious breakfast foods ever.

Huevos Motuleños (“eggs in the style of Motul”) are extraordinarily simple to make: a fried tortilla (tostada) is topped with black beans, an egg or two, a little cheese, chopped ham or bacon, a tomato sauce…and, here’s the kicker: peas. Hard to say why, but peas are included in the traditional recipe. This platter of chow looks great, and it’s usually served with fried plantains which add a sweet note to the very mild heat, the acidity of the tomato sauce balances the richness of the eggs and cheese, and the beans and tortillas provide a solid, almost neutral foundation. It’s a wonderful—and very simple—breakfast.

Angel took us to Doña Evelina, a clean, well-kept place above one of Motul’s teaming indoor markets. Doña Evelina herself was there, cleaning tiny peppers to put on top of her creations. Her restaurant regularly draws big crowds at lunchtime.

It’s not like Huevos Motuleños are difficult to make. It’s just that it’s the kind of relatively obscure regional Mexican food that most of our local Mexican places don’t serve because there just are not enough Yucatecan-transplants living in Chicago to justify an item like this on the menu.

There are now many birria places in Chicago (reflecting relatively high rates of immigration from Jalisco) and mole is no longer an obscure sauce (Chicago gets its fair share of people from Oaxaca). Yucatecan food, however, is not nearly so well represented.

Freddy Sanchez, formerly corporate chef with Lettuce Entertain You Enterprises’ Adobo Grill, and currently executive chef at Happ Inn Bar and Grill in Northfield, is from Guerrero, another Mexican region that’s very well represented in Chicago. We asked him why there are so few Yucatecans in Chicago. “Yucatán is still a relatively wealthy region,” says Sanchez, “so people just don’t leave.”

Indeed, Mérida was once considered the richest city in Latin America.

Though compared to the United States, the standard of living might seem low in Yucatán, we drove through small town after town where people seemed to be living comfortable, traditional lives, some still living in the wattle-and-daub, thatched-roof, single-room structures that the people of the peninsula have been living in since many centuries before Columbus. And they’re still eating many traditional foods, some of which may date back thousands of years, a few of which are slowly trickling onto Chicago menus.