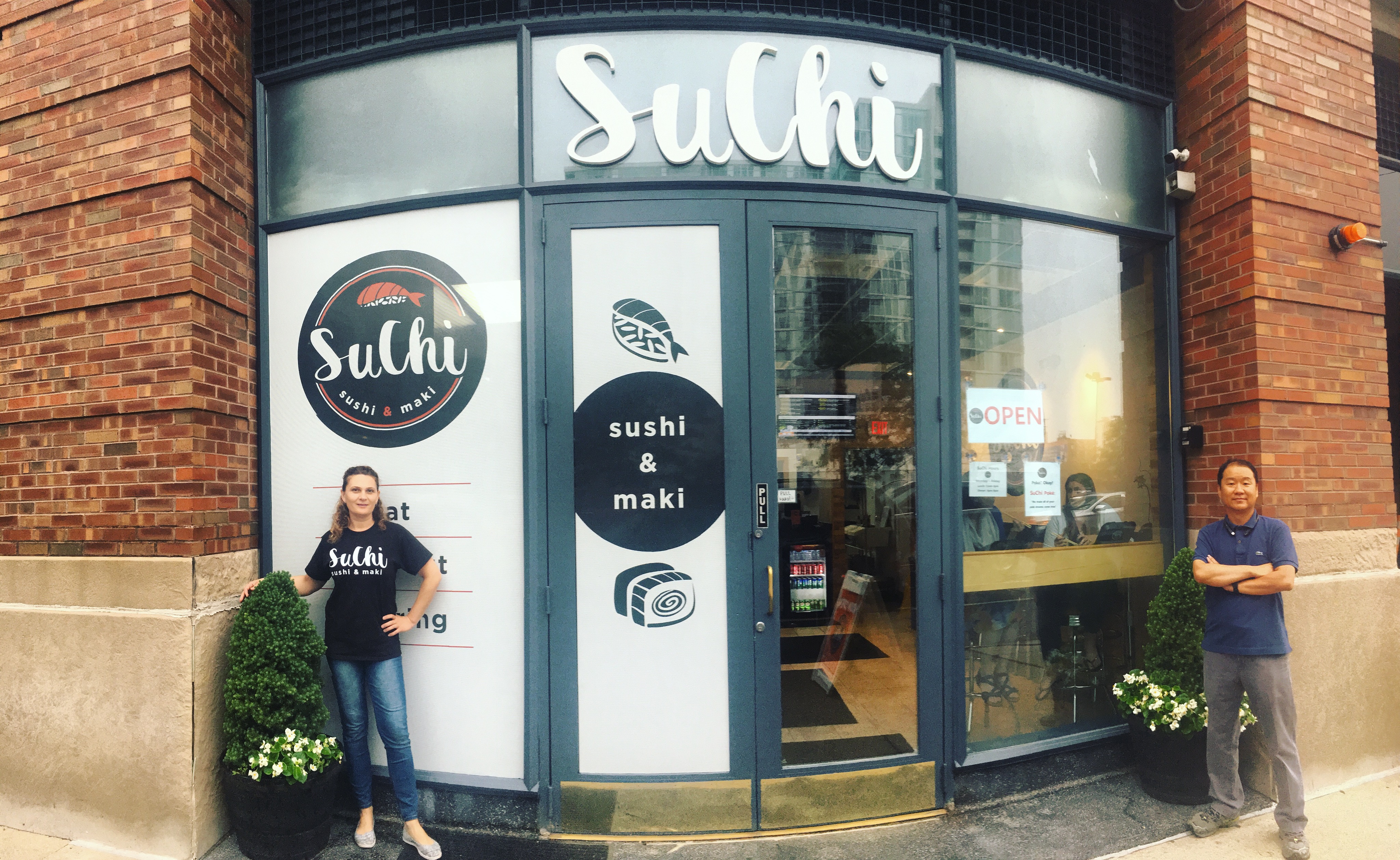 Joon Soh loves to sit at a sushi bar while drinking sake and sampling different types of sashimi and nigiri. He enjoys chatting with chefs about their food, their craft. Eleven years before he opened Ora, a sushi bar in Andersonville, Soh worked in accounting and marketing; on the side, he was constantly seeking out “good hidden restaurants.”

Soh always thought he might want to be a restaurant owner. He was sure that if he ever did open one, it would be a sushi bar.

Between 2012 and 2017, Soh was Ora’s proud owner, but he had many more ideas he wanted to explore. He found a partnership with his friend Julian Nae, who owns a contracting company in Chicago. In 2015, they started bouncing different ideas off each other for a new restaurant venture. They were ready for a change of pace, and they wanted to explore a different format.

“I do like sushi,” Nae says. “But when I go to a sushi place, I have the feeling that I’m spending a lot of money,” a feeling we’ve all had, though we’ve understood that the best fish is going to cost more. Soh sought to subvert that paradigm. So, when the team opened SuChi Sushi in May at 651 West Washington, their goal was to provide top-quality sushi, affordably priced and delivered with the kind of attention-to-detail service that keeps customers coming back.

Nae admits that he also wanted to get into the business for his wife, Diana Muntean, who co-owns SuChi Sushi with Soh and Nae. Muntean worked in the medical field for four to five years before she began to explore her passion for cooking. “I wanted to give her this opportunity,” Nae says. “To enjoy life, to enjoy something that she wanted to do, even if it would not be so easy.”

Muntean liked the idea of offering fresh and delicious food to customers quickly, at a value price, with excellent service.

“I’ve been cooking daily,” Muntean says. “I’ve been learning how to make maki and have even felt the desire to create new rolls.” 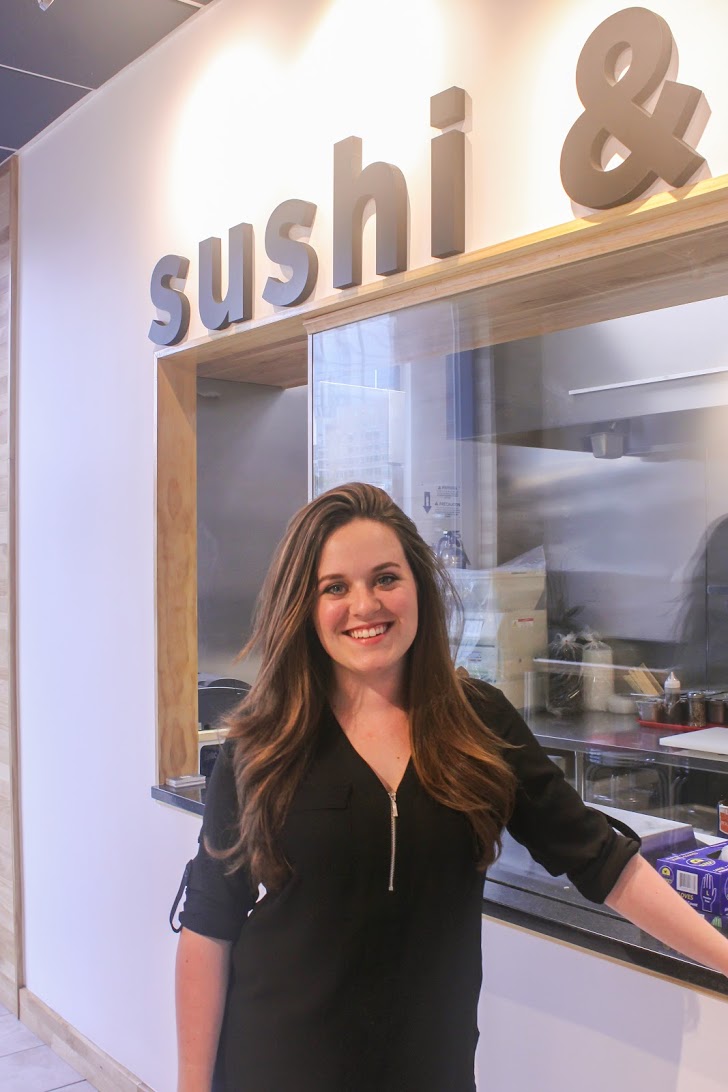 To help them run and market their new venture, the owners hired a team of sushi chefs, including Chef Jeff Waiyachote, and a general manager and marketing manager, Lauren Cornell, who had previously worked alongside chefs in the kitchen.

“I understand the rushes they may go through and the different forms of communication they’re receiving,” Cornell says. “I feel that understanding all aspects of our business allows me to be a bridge between our teammates and the different experiences they have.”

The constant communication between all the team members propels their efforts to hold their food and service to very high standards.

Soh focuses on the little things, like knowing how much soy sauce to use or catering to customers’ requests with urgency. To him, “a little too much service is better than too little.”

Nae likes that the restaurant is laid out so customers have a clear view into the kitchen, so that everyone can interact with chefs and witness the cooking process. The restaurant space is designed to break down barriers.

In the kitchen, the SuChi Sushi menu development team—Muntean, Cornell and Waiyachote—have been refining the menu during their soft opening to bring new flavors to their customers.

The menu development team has also been looking to experiment with different textures, like fried garlic slices, ikura (salmon roe) and even ingredients from other food genres “to bring new flavors into the sushi.” Their rice is based on a special recipe, as well, with vinegars and seasonings that create a citrus-like, fresh and tangy flavor.

Waiyachote, who works often during dinner hours, has been in the process of creating a roll with a base of tuna and yellowtail, sticking to the basics of maki with little-to-no sauce. Though it’s still in the process of being developed, he wants his menus to provide “a fresh bite” for customers. Muntean is also working on new rolls, experimenting with bringing other culinary cuisines into her recipes.

To better serve their vegetarian customers, Cornell has been developing the Oompa Loompa roll, which will have a base of sweet potato and should satisfy veggie-enthusiasts who enjoy more spicy rolls.

Allergy sensitivity is important to the team, and especially to Cornell, who herself is gluten-free and dairy-free.Their alternating menu options offer vegetarian, vegan, gluten-free, peanut-free and rice substitutions (fresh spring greens). Two of their specialties, the Kamikaze SuChi Burrito and the Fresh Tuna Poké Bowl, are available in gluten-free options. 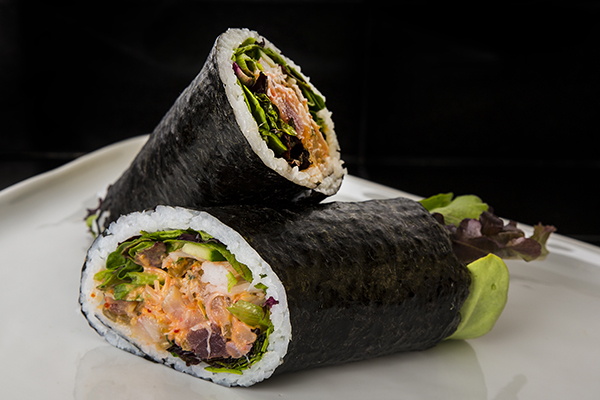 “I sat down with the team and we looked at all the rolls, figured out what was already gluten-free and what we could make gluten-free,” Cornell says. “I wanted to make sure our menu was accessible.”

“Plus, I love poké and sushi burritos, so I told the team that I need to eat those,” she jokes. 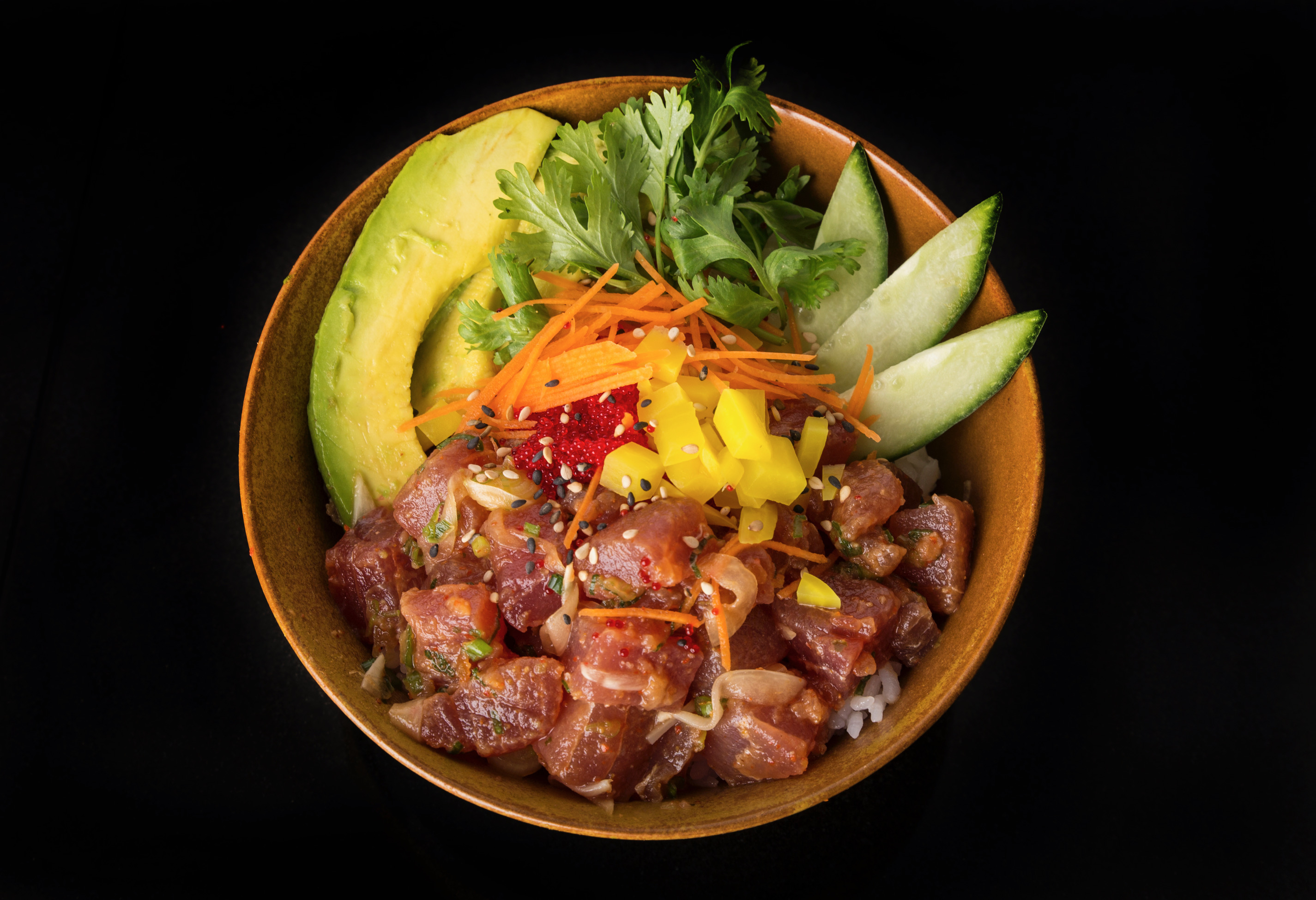 Soh and Nae’s focus on good quality fish is essential to the success of their menu items. They have a two-three-day turnover for the fish and avoid using prepackaged frozen fish. They receive fish whole and filet them in-house as soon as they arrive, alternating between different vendors, including True World Foods, JFC, Yamasho and Martinez. More Asian-cuisine-specific products come from H-Mart and Joong Boo Market Chicago.

“If we can’t get the highest quality salmon from one company, we get it from another,” Soh says. “We are always looking for the best vendors.”

So SuChi Sushi delivers quality, but how about their goal of keeping the prices down? All their rolls, which are generously portioned, come in at $11; compare that to the $17 signature sushi rolls at the also excellent and nearby Kamehachi on Wacker or the $12-$18 rolls at Ryo Sushi on Madison.

Because they want their menu to be accessible, they focus on providing quality sushi at an affordable price by building efficiencies into their system that enable them to minimize operating expenses. They cut costs where possible—like using cost-effective packaging materials, minimizing dine-in service and eliminating dishes and tables—all without sacrificing the quality of the fish.

“Everything is a formula,” Cornell says. “We know how much every roll costs, down to the minute that it takes to make it. Our upfront costs are lower because of our small format, so we’re able to price our sushi as competitively as possible.”

Visitors praise SuChi Sushi’s service extensively and the owners and management take pride in that. They concentrate on hiring friendly, respectful people from the get-go; then they focus some serious customer-service training. Cornell and Soh lead by example, occasionally offering complimentary beverages, being respectful and helpful with customers’ children, opening doors for people and memorizing regulars’ orders. Seemingly little stuff like that means a lot to customers.

“We pride ourselves on basic courtesies that can sometimes go overlooked in a restaurant setting,” Cornell says. “Because many of us come from a customer-service background, we want to provide the warm experience of visiting family. Our employees recognize that and follow that because they know it makes a difference.”

Customer Jimmy Liddar, who has eaten poké across the whole city, says that SuChi Sushi’s Fresh Tune Poké is the best he’s had and with the most generous portion of fresh fish. He often comes into SuChi Sushi twice in a single day. “They have the friendliest staff and ownership that I’ve come across in the West Loop,” Liddar says. “The final slice of pie to me is that they’re open on Monday and the fish is still fresh! There’s never been such a fast and affordable sushi place like this west of the river.”

In the future, in addition to take-away, catering and delivery services, the owners hope to explore opportunities like franchising and food trucks.

“We’ve thought about specialized franchise branches, for instance, a poké food truck, a Korean BBQ kind of place,” Cornell says. “Having a specialized menu at each location ensures quality.”

Sushi has long had tremendous popularity. According to June 2017 data research sourced from the Bureau of Labor Statistics, Sushi Encyclopedia and Asia-Pacific Journal, there were 3,946 sushi restaurants in the US between 2010 and 2014, reflecting a twenty-eight percent increase reflected in U.S. sushi consumption.

But for Nae, it’s simple. He loves sushi for its natural flavors and fresh ingredients. The variety of sushi and styles—fried, raw, sauced, plain, non-fish proteins—make it accessible to a much wider audience.

“It’s also visually beautiful,” Nae says. “You take your time and savor the flavor of every piece, every bite.”

Danielle Levsky is an arts and culture reporter, theater critic, essayist, poet, vocalist, technical writer and project manager. Born and raised in Chicago, she grew up speaking English and Russian, then later became fluent in French through her primary and secondary education. In addition to her work at Newcity, she has contributed news articles, arts/culture/music reviews, personal essays, interviews and editorial content to Mental Floss, HelloGiggles, Pittsburgh City Paper, Thrillist, Femsplain and other print/online publications. Danielle previously worked as a pagination designer and copy editor for the Chicago Tribune. When she’s not freelancing, Danielle writes poems on command with Poems While You Wait, sings with the Music Institute of Chicago Chorale and drinks copious amounts of tea.