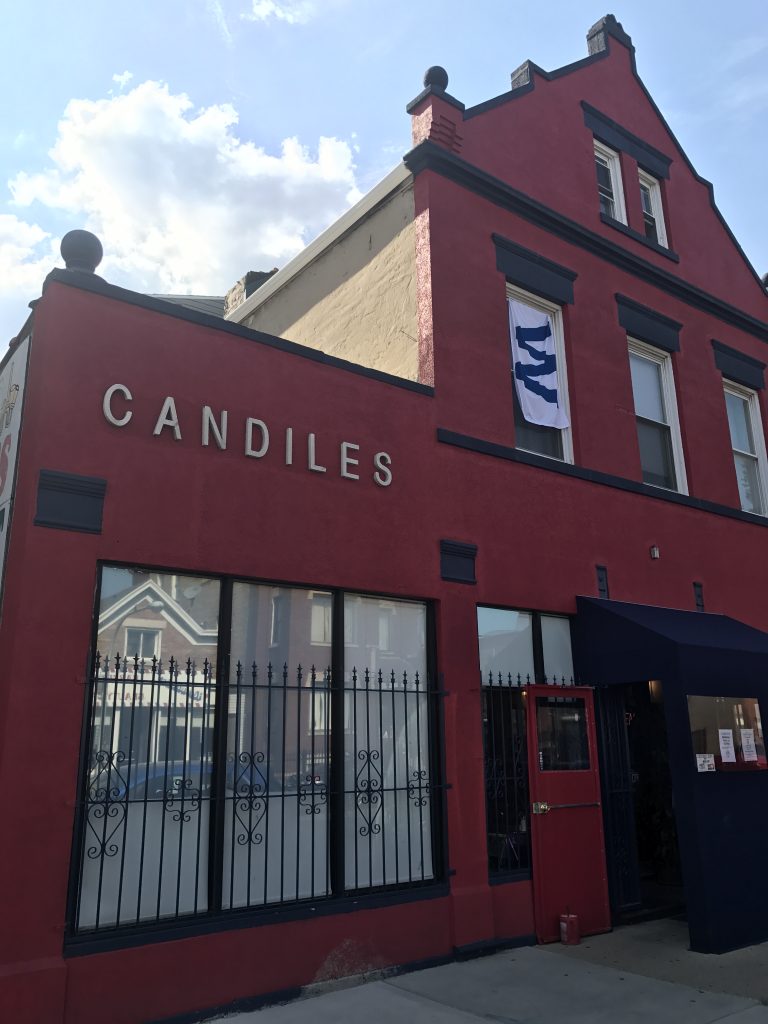 Chicago is home to over 7,000 restaurants, and it’s safe to say that many Chicagoans, including food writers, have never heard of nor visited more than a fraction of those places. Many of these restaurants don’t advertise and don’t have PR representation, so they remain unknown to most of those who live in Chicago and surrounding suburbs. Not surprisingly, some of these unheralded restaurants are very good; they just serve a clientele that is probably not you.

Los Candiles, a small and friendly Mexican restaurant in Little Village, is like that.

Los Candiles has no website and no reviews outside of Yelp, where the comments are mostly glowing, giving the place four-and-one-half stars out of five. Visiting there, you’ll notice that the diners seem to be mostly local folks, which makes perfect sense as Los Candiles is likely not known beyond its local precincts.

The Los Candiles menu reflects many foods from Northern Mexico. Having eaten in many little Mexican restaurants in Chicago, it’s safe to say that this is one of the most pleasantly appointed, not fancy, just thoughtfully outfitted. It’s a bright and tidy dining room, paneled with knotty pine (more Northwoods than Northern Mexico), festooned with photos of Mexican movie stars (I recognized Cantinflas, but that was about it), and welcoming.

Before walking in, I noticed some very good signs, specifically eight-and-a-half-by-eleven white paper signs taped to the front door advertising special offerings: agua de lion con chia and agua fresca ciruela. Los Candiles does not serve alcohol, but aguas frescas are a perfect accompaniment to Mexican food. As the name implies, this is a water-based beverage with fresh fruit added: the agua fresca with sweet ciruela (a small yellow plum) offers a very good counterpoint to the slight chili heat of the food.

Whenever I see something on the menu that I don’t recognize, I order it. I’d never seen Enchiladas Potosinas before, so that’s what I ordered. I was surprised. It was tasty, but not what I expected (points for that). Enchiladas, usually understood to be soft tortillas filled with meat or cheese and drenched in sauce, are apparently made completely differently in San Luis Potosi than they are at just about any other Mexican restaurant you might visit in the States or in Mexico. Enchiladas Potosinas are small half-moon envelopes of cornmeal, seasoned with chili peppers (usually ancho or guajillo or both) and fried hard. I’m guessing these enchiladas can be filled with any one of many different proteins; mine were stuffed with cheese. There was no sauce on top. 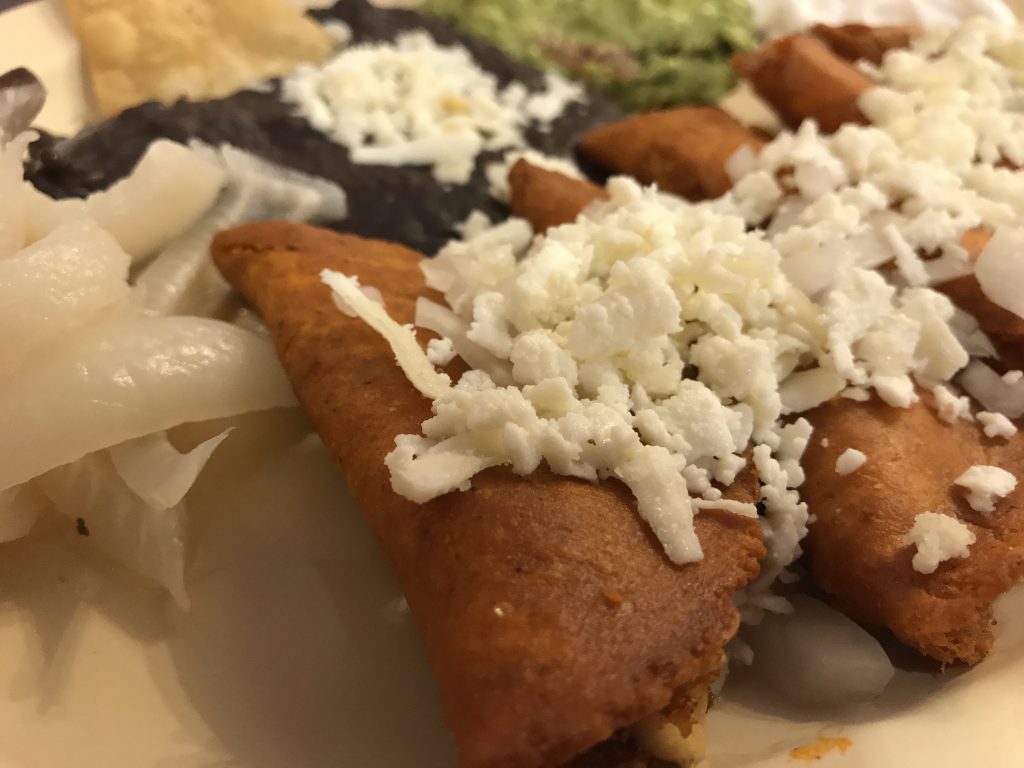 The Enchiladas Potosinas were served with black beans, guacamole, a large dollop of crema (a slightly thickened cream, common on Mexican tables)—and vinegared pork rinds. My server was a very sweet young woman who spoke just a little English (I mention that only because you might want to come prepared with just a little Spanish). She asked me, with a questioning smile, if I was sure I wanted the pork rinds (skin of the pig). Of course, I did! There was a lot of richness in this dish (lard-laden beans, rich guac, and the always-present crema), and that little bit of pickle helps cut the fat. I liked the pork rinds better than I thought I would: it’s not that they have a huge amount of flavor, but they do have a very pleasing texture (If you like gummies, you’ll like the texture of pork rinds).

At Los Candiles, popular items are the Huevos Divorciados (two fried eggs, one with red and the other with green salsa) and Enchiladas Huastecas. The Enchiladas Huastecas are also simply prepared: corn tortillas, softened in oil and folded around chicken, beef or potatoes with chorizo.

All the food at Los Candiles is value-priced. The average entrée is $10 or less, and the most expensive entrée is Bistek a la Mexicana Suizo at $11.25. You can afford to try things you’ve never had before, and you really should. You might find something you like, and just as importantly, you might come to learn something about the culture of another country.

I heard about Los Candiles from Brian Hieggelke, Newcity’s publisher/editor; they’d shot a scene in “Signature Move,” the upcoming film he produced, in the restaurant. The movie is set in Chicago, which was likely logistically desirable but also thematically suitable: we’ve got a lot of cultures bubbling together here, so it’s not at all out of the realm of possibility that a closeted Pakistani-American lawyer and a fully out-of-the-closet Mexican-American bookseller might meet at The Hideout and fall in love, as they do in this movie. These are the kind of cross-cultural experiences that happen all the time in Chicago, and we’re very lucky they do.

The culinary greatness of Chicago, New York, Los Angeles and, in fact, the United States in general, is that we have a lot of different people, with a lot of different cultural backgrounds, living together. In Europe and elsewhere, attacks on ethnic food are seemingly symptomatic of growing nationalism. In Italy, Verona’s mayor has demanded “no more openings of establishments that sell food prepared in a way that could impact the decorum of our city” (sounds like a good way to eliminate street-food vendors). In Northern Europe, The Danish People’s Party, which wants to restrict immigration and force assimilation of the country’s immigrants, believes that such practices as preparing and serving halal meatballs “discriminate against Danish culture.”

As an American, and particularly a Chicagoan, I feel that all cultures and foods are open to us, and we should eat them, not only because they taste good but because they’re a way of connecting with cultures not our own. Sitting down to a meal of foods you’ve never seen before is a way of not only showing that you respect different culinary traditions, but also that you trust the people in the kitchen will serve you something good, even if you’re not entirely sure what to expect.

At Los Candiles, you’re probably going to find some Mexican foods you’ve never heard of before. Eat them.