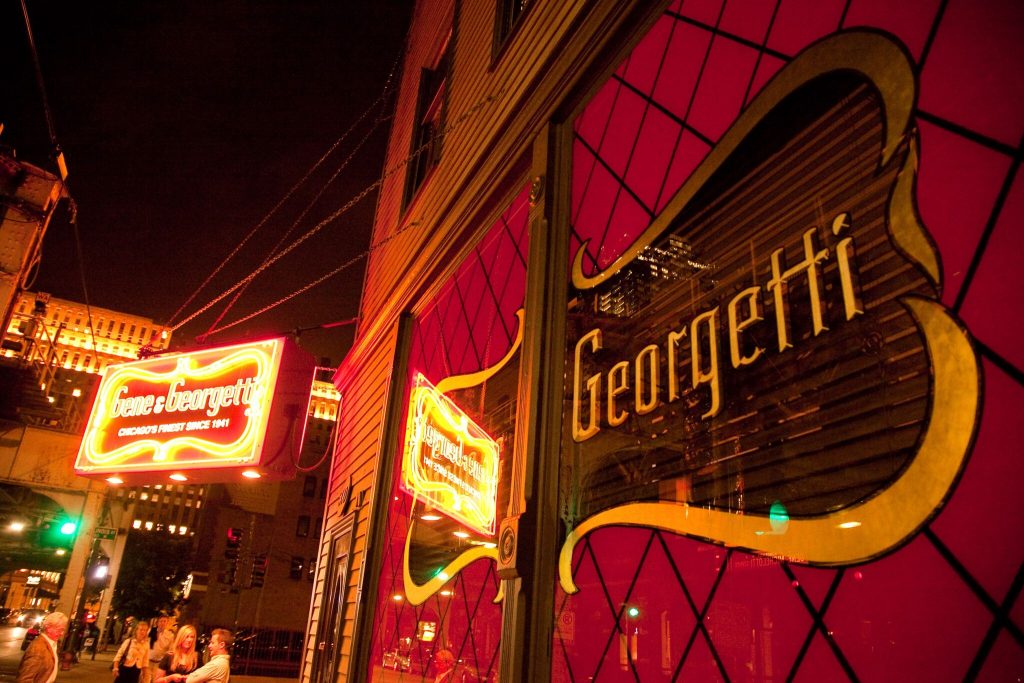 Immigrants to the United States in the nineteenth century were mostly German, Irish, Scandinavian and British. But in the early part of the twentieth century, it was mostly Italians. Between 1900 and 1915, three million Italians immigrated to America, the largest nationality to come to this country at the time. They brought their recipes with them.

With growing Italian communities in lower Manhattan and the Near South Side of Chicago, there was a yearning among immigrants for the foods of their homeland. Italian restaurants likely opened initially to serve immigrants who knew the food. Inexpensive and tasty spaghetti and pizza soon caught on with a larger population.

Italian food remains the most popular “ethnic” food in the United States, a country with a penchant for big cuts of red meat. It was just a matter of time before the food of Italy and all-American beef came together.

In 1926, two Italian immigrants—Pio Bozzi and John Ganzi—wanted to open a restaurant named after their hometown of Parma. The registry office in New York City misunderstood their pronunciation, and so the place was accidentally called The Palm. In the early days, the story goes that whenever a customer ordered a steak, Bozzi or Ganzi would have to run out to buy one and quickly cook it up. Because customers kept asking for the meat, steak became a regular dish on the menu. The current menu at The Palm includes Italianate appetizers like calamari fritti and clams oreganata, and there’s a whole “Classic Italian” side of the menu that serves chicken Parm, linguini and clams, and so on. The Palm was the prototype for Italian-American steakhouses in New York as well as Chicago.

Locally, you don’t have to look far to see that Italian-Americans and steakhouses go together. In 2017, Torali Italian-Steak opened in the Ritz-Carlton and Gibson’s Italia went up in a swank tri-level near the Chicago River. Before that, there were many restaurants in Chicago serving Italian and Italian-American dishes alongside the great American steak: Gene & Georgetti comes to mind, and even Harry Caray, the voice of Chicago White Sox and Cubs, gave his name to Harry Caray’s Italian Steakhouse. Italian food was likely a favorite of Harry’s, who was born with the last name Carabina (his father was Italian).

There are gustatory and historical reasons why there are so many Italian-American steakhouses and fewer, if any, German, Irish, Scandinavian or British steakhouses.

At the Italian Village Restaurant, where La Cantina specializes in steaks to complement the regular Italian chow, general manager Joseph Deininger believes “Germans are known for their pastries and sausage, while the Irish specialize in grains and stews. Pork and meatballs are a specialty for Scandinavians, while seafood and meat-pies are staples in England. Steak does not complement any of these food types, which may have to do with the lack of these types of steakhouses.“

Undeniably, meat and potatoes go together beautifully: the rich meat and relatively bland starch balance each other well. Similarly, Italian food, like pasta and sauce (or do you call it “gravy”?), pair perfectly with red meat. The red sauce provides bright acidity to cut through the fat of a good steak. Add some cheese and you’ve upped the umami ante of your steak dinner. 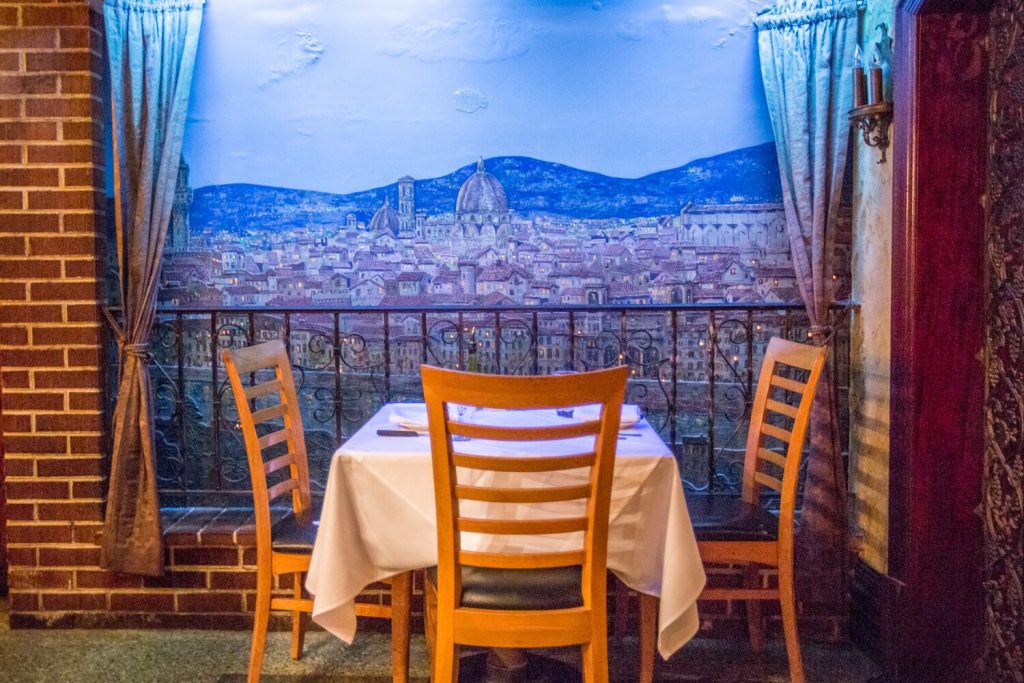 Steak with a view of Florence at La Cantina/ Photo: Italian Village Restaurants

“In the United States, Italian cuisine is the most popular dining-out choice.” In the opinion of David “The Food Dude” Lissner, owner of Chicago-based BestSteakRestaurant.com, and a guy who knows something about steak. “That makes pasta among the most popular side dishes. Our country was also blessed with an abundant and inexpensive supply of quality beef, which may explain why we eat more beef than any other country in the world.”

Historically, restaurateurs like the two Italians who started The Palm were responding to market pressures: their American customers wanted steak, so The Palm stocked the meat to keep customers happy. It’s business, but also reflective of the impulse to assimilate that drove Italian Americans to serve the American public whatever they wanted and to be, themselves, as American as they could possibly be.

Chicago’s Union Stockyards may also have had something to do with the rise of Italian-American steakhouses in Chicago. “Back in the early 1900s,” Deininger says, “Chicago was a top beef supplier. The city also had the third-largest population of Italian immigrants in the United States. As many Italians opened their restaurants, focusing on steak made sense as it was high-quality, easy to come by and affordable.”

There were market and cultural forces behind the growth of the Italian-American steakhouse, but the main reason you often find steakhouses, even non-Italian-type steakhouses, serving Italian food with their red meat, is simple: the two taste good together.

Gene & Georgetti, opened in 1941, is the oldest steakhouse in Chicago. The place has a presence unlike any other Italian red-meat joint in the city. It’s a vibe you can’t just design or buy into, one that comes with age, the countless famous and infamous patrons who’ve passed through its doors, and time-tested servers who trot out the beautiful meat (try the veal!). This iconic Chicago restaurant also serves classic Chicago dishes like Shrimp De Jonghe and Chicken Vesuvio. On the regular menu, Italian dishes, in fact, outnumber steaks. There’s now a Gene & Georgetti location in Rosemont; it’s nice, but it ain’t the same as the original. 500 North Franklin, (312)527.3718

Mirabella Italian Cuisine & Bar was started by a guy who once worked at Gene & Georgetti. This smaller Italian steakhouse, a neighborhood favorite, located in a building that used to house a German restaurant (Mirabell) is going all-out on Italian dishes, with starters like minestrone and lots of Italianate chicken dishes including Marsala, piccata, Parmesan and Vesuvio. Of course, there’s much red meat. 3454 West Addison, (773)463.1962

Rosebud Steakhouse is the place my Italian aunts used to go. There’s a lot of pasta, including rigatoni alla vodka, spaghetti and meatballs, linguini and clams. The showstopper, however, is the eight-finger cavatelli. Cavatelli means “little caves” in Italian, and the pasta looks like little hotdog buns folded by human hands (which, as you probably know, possess eight fingers). As at many Italian-American steakhouses, the steak is primary, but the pasta runs a close second. 192 East Walton, (312)397.1000

Harry Caray’s Italian Steakhouse, named the best steakhouse in Chicago in the Chicago Tribune dining poll, serves Midwestern beef, USDA prime, aged twenty-eight days. Alongside the big meats are some classic, and some not commonly seen dishes of Italian origin—at least in steakhouses—like the Italian wedding soup, arancini, and classic antipasto platter. As a further nod to Italian heritage, the restaurant is housed in the former mansion of Frank Nitti, Capone enforcer. 33 West Kinzie, (312)828.0966

Italian Village is a mainstay of Chicago’s Italian restaurant community. At La Cantina, there are all steaks and chops that go so well with Italian chow. The chops are dressed with a distinctly Italianate flourish, including a Vesuvio, oreganato and gorgonzola crust (blue-type cheeses seem to go particularly well with beef and veal). With that, you’re going to want a side of pasta. 71 West Monroe, (312)332.7005

RPM Italian, produced in part by the Lettuce Entertain You empire, goes all-out on the pastas, featuring over a dozen house-made varieties, as well as fifteen cuts of steak. Among those cuts is bistecca Fiorentina, from the famous Chianina cattle, the legendary Tuscan white breed, and one of the few kinds of beef you might want to order rare rather than medium rare, which is how pretty much everyone except our chief executive, seems to order their steak prepared. There are also Wagyu and Kobe varieties that you’d have a hard time finding elsewhere in Chicago. The menu has worked so well they’ve opened RPM Steak nearby at 66 West Kinzie, (312)284.4990. 52 West Illinois, (312)222.1888

Gibson’s Italia is another overt declaration of a steakhouse’s Italian affiliation, with the dishes to back up the claim: zuppa di pesce, fresh ricotta and an Italian grain bowl are on the menu, and the red meat offerings include Piedmontese beef with shaved Grana Padano cheese. But even at other Gibson’s locations that do not call out “Italia” in the name, there are dishes of Italian heritage including Chicken Milanese, giant white beans and Caprese salad. 233 North Canal, (312)414.1100

Torali Italian-Steak is one a new addition to Chicago Italian steakhouses, and its very name states the unabashed conjunction of the Italian tradition and red meat. Inside it’s all Italian leather and marble, sleek and modern. The pasta is house-made, and it’s served in Italian-American classics including three-cheese tortelloni and spaghetti with meatball—that’s right, one meatball, seven ounces of it, which is way more Italian-American than European-Italian. 160 East Pearson, (312)573.5160 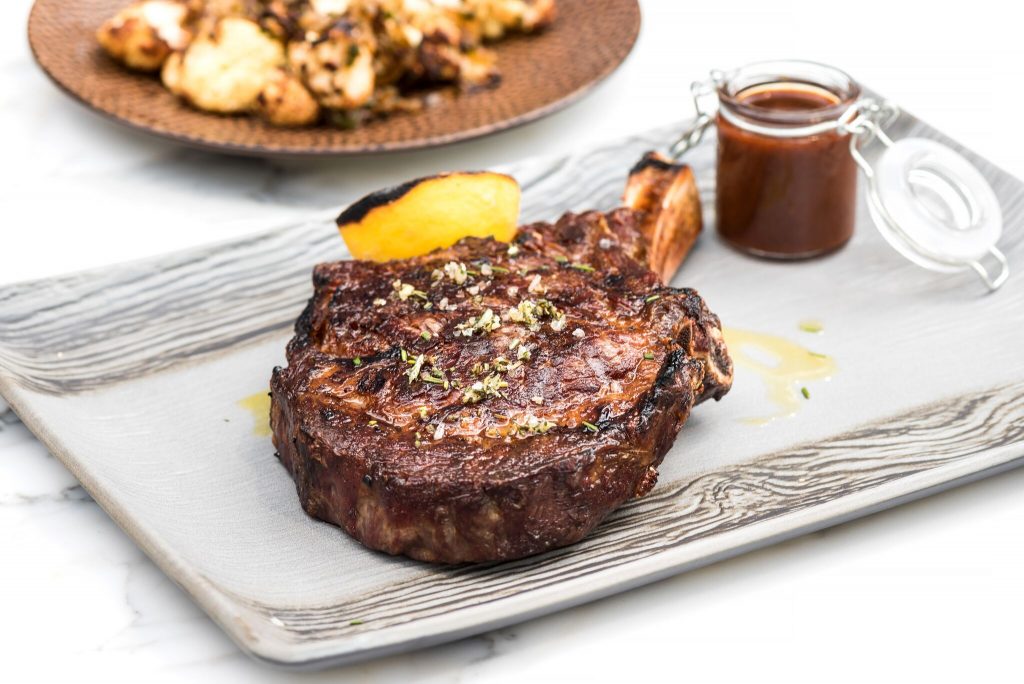