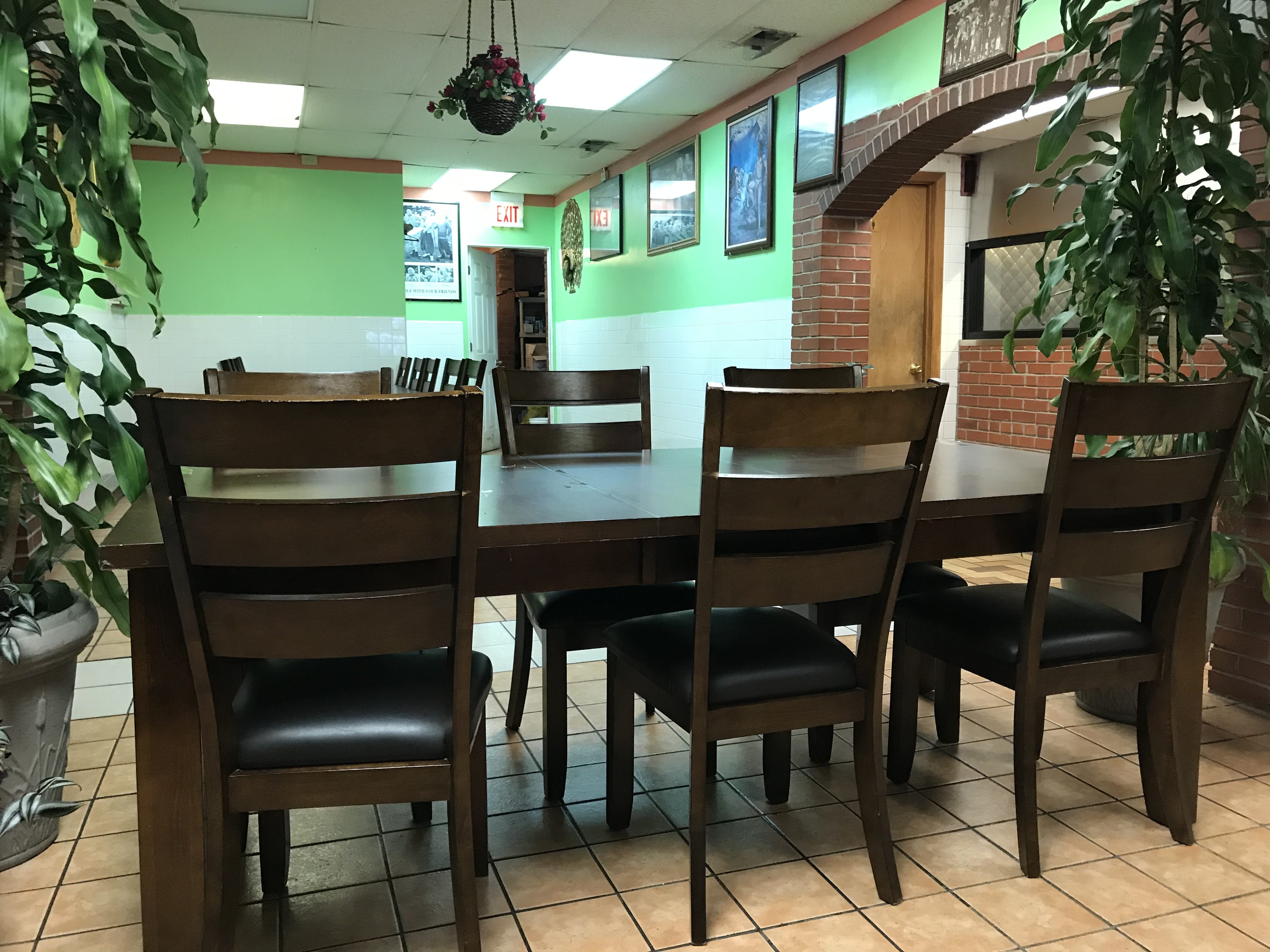 It did not look promising. Two of the first three Yelp reviews gave the place one star:

“Wish I could give this hell hole zero stars. It smelled like a wet dog in there and it is quite possible the meat was Labrador. Terrible”

“Absolutely terrible customer service. Refused to comp a meal when my friend found hair in it. Made sure to tell him twice that they WERENT going to comp the meal and he was responsible for it.”

Not promising at all.

So why would I even consider going into this small Mexican restaurant, on a dreary stretch of south Harlem, with negative reviews like that and a dining room that looked like it could fit fifty but was completely empty?

How I Got There: a game called “Restaurant Roulette”

I went into El Gallo de Oro because I was playing Restaurant Roulette, a game I invented to get me to new places I’d never otherwise try. I pick a street, a side of that street, and then travel along it based on the date. I randomly selected the right side of Harlem, and It was January 27, so I would eat dinner at the twenty-seventh place on the right side of Harlem going south.

One unbreakable rule of this game is that the player (me) must commit to going into the fated restaurant, as determined by the game’s rules.

Walking in, I noticed a handwritten sign on the door announcing that El Gallo de Oro is open until 5am every morning, appealing to guys getting off the night shift, or more likely guys continuing a nonstop Lost Weekend.

What I Ate: my first chimichanga

El Gallo de Oro was not an unfriendly restaurant: the nice lady who took my order seemed to smile with pity upon me. I may have looked a little sad: all alone on Saturday night, dining solo in a place that staff probably knew was, itself, maybe a little sad.

My order was something I’d never had before: a chimichanga.

Chimichangas have been, for me, pretty much off scope. Then, a little over a decade ago, I watched Summer Wheatley deliver her campaign speech in “Napoleon Dynamite”:

Summer’s perhaps intentional mispronunciation of “chimichangas” started me thinking about this food, one of those Tex-Mex dishes that may be the least respected of a generally disrespected culinary tradition (which I have defended in the past). Traditional Native American cooks in what is now Mexico and the Southwestern United States didn’t have vats of hot oil, so chimichangas had to wait for the deep fryer to be invented. 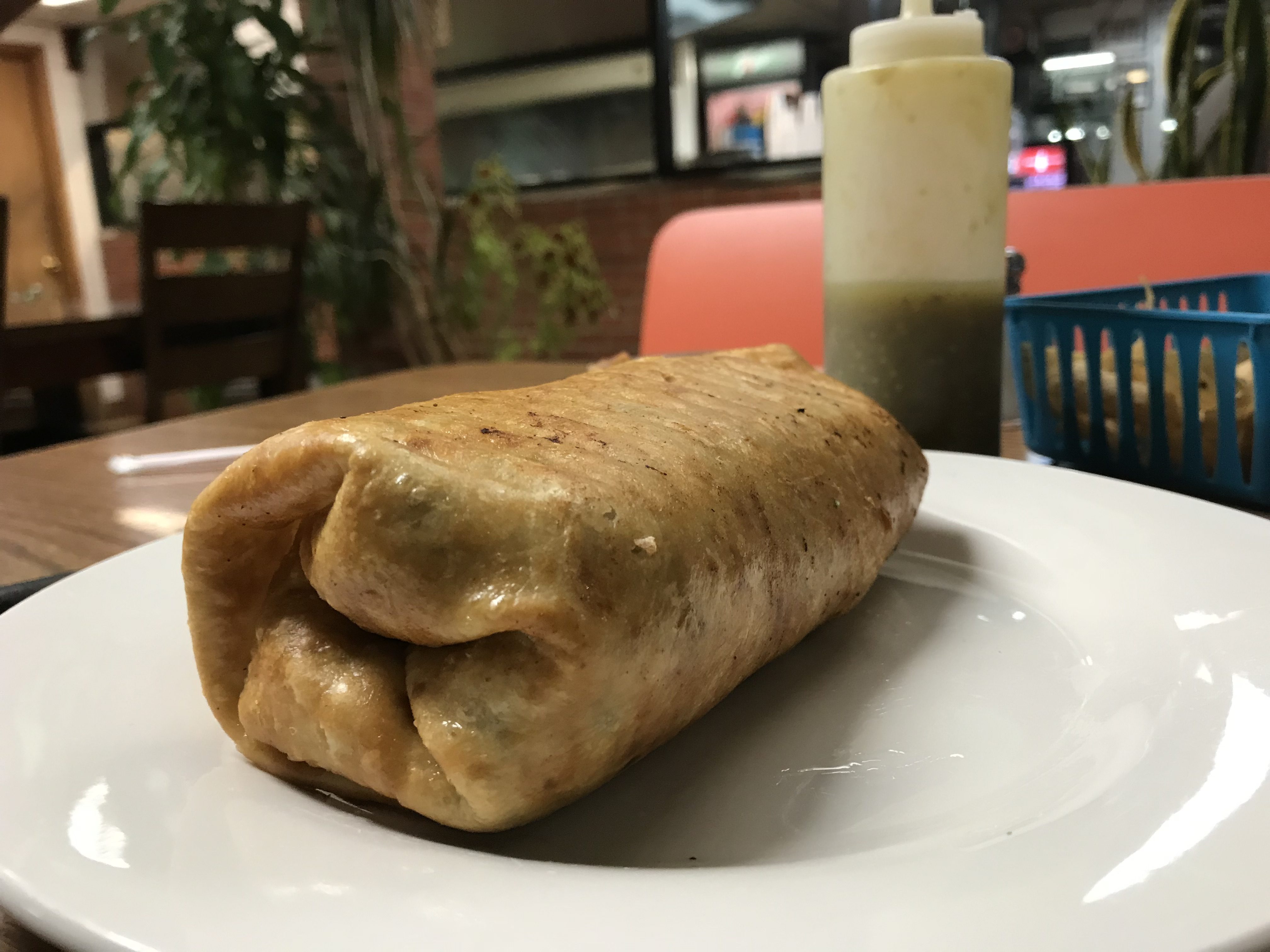 The chimichanga—in the unlikely event that you, too, have never had one—is a fried burrito. One legend has it that the chimichanga was invented at the over ninety-year-old El Charro restaurant in Tucson. Story goes that a cook was making a burrito, accidentally dropped it in oil, and uttered a familiar curse using the Mexican-Spanish profanity, “chingar” (to fuck). Then this cook stopped, bethought herself, muttered something akin to “chimichanga,” ate it, liked it, and put it on the menu.

Or maybe the founder of Macayo’s Mexican kitchen in Arizona and Nevada came upon the chimichanga in the mid-forties while he was experimenting with foods in his kitchen—at least that’s what he claims.

A folklorist at the University of Arizona believes the chimichanga was developed by the Yaqui, an indigenous people whose wisdom was passed on to Carlos Castaneda, author of trippy mystical adventure-cum-philosophy books like “The Teachings of Don Juan: A Yaqui Way Of Knowledge” and “A Separate Reality.” Purportedly derived from ancient Toltec wisdom, these teachings were also influenced by psychotropic flora harvested from the Mexican desert, specifically Jimson weed, peyote and magic mushrooms.

I’m putting my money on the Yaqui origin story, as it would reflect the kind mindset that might give rise to the chimichanga, perhaps the ultimate munchie. I had to try the chimichanga, choosing it over many other Mexican and Tex-Mex standards, like the enchiladas, flautas, and so on, all looking very, um, standard.

The chimichanga turned out to be a thick baton made of a large flour tortilla, fried only lightly brown (golden but not crackly), filled with a mix of peas, carrots, ground beef and lettuce. The lettuce was the biggest mistake: a few shreds can be fine on a taco, but when subjected to heat, as they were in this chimichanga, they become wet green shreds that don’t add to the overall composition.

I chowed down the chimichanga. It was easy to eat; everything except the fried shell was very, very soft, needing almost no chewing, just swallowing, perfect for someone whacked out on Jimson weed. I had no such preparation, though I was very hungry (it was a long drive).

There was nothing to drink except soda, which I don’t consume, and water, which was my choice. If they served liquor, I would have opted for a bottle of Jack Daniels, no ice, no glass.

Restaurant Roulette has revealed interesting places to me, and even if the place itself is not that great, there’s usually something to learn.

The impulse of every food writer is to “discover” some unknown restaurant and proclaim to the world that it serves the best damn cevapcici, pho or beef Stroganoff around. Though the chimichanga at El Gallo de Oro was, to the best of my recollection, the only chimichanga I’ve ever had, I sincerely doubt it was the best chimichanga around.

Though it’s not a food held in high regard by many, how long could it be before a high-end restaurant does their fancy-pants take on this humble chow, just as has been done with moon pies, Chicago hot dogs, and other simple and filling popular foods? Blue Agave Tequila Bar and Restaurant allegedly has an awesome chimichanga, but we’re waiting for Grant Achatz or Curtis Duffy to put on the menu a Beef Wellington Chimichanga or Truffle-Potato Chimichanga.

El Gallo de Oro is what it is: a service station for food, like a filling station for gas: you come in expecting no more than the basics, you fill up, you go on your way. My chimichanga was not the most handsome handful of food, but just before dawn on a Sunday morning, it could be manna from heaven.