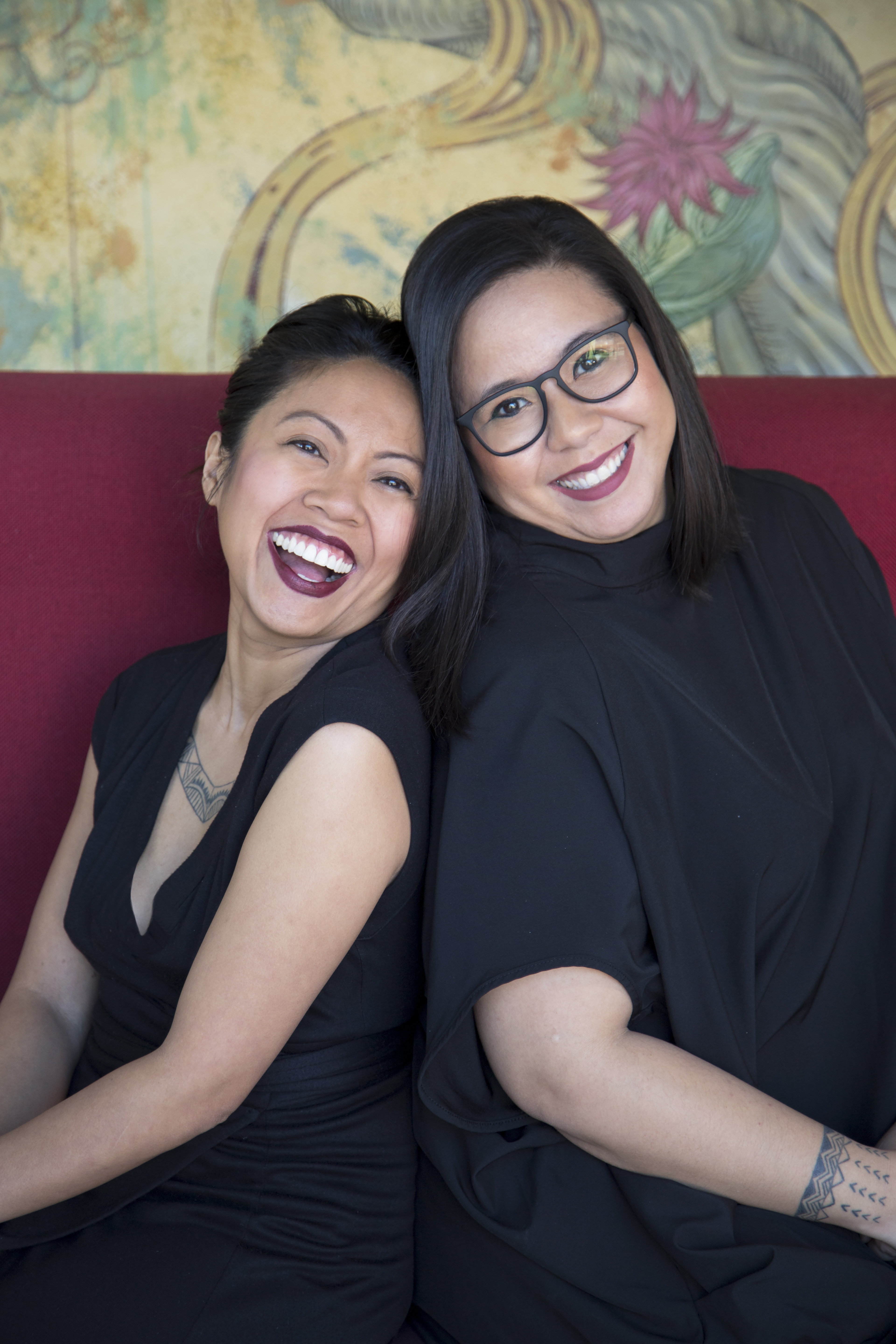 41
Sarahlynn Pablo and Natalia Roxas
Chefs
Filipino Kitchen is a joint effort of Sarahlynn Pablo, a writer, and Natalia Roxas, a photographer, both of whom put time into the kitchen to bring the food of the Philippines to Chicago. Chicagoans are just beginning to understand Filipino food, and that understanding is challenging because, as Pablo explains, “our cuisine evolves as we evolve and continue to cook our foods. Our challenge as keepers of this tradition is to be inclusive while not alienating others within and outside of our communities.” As part of their mission, Pablo and Roxas bring Filipino food to the people through events like February’s Usapang Pagkain, which Pablo says “is a discussion within the Filipino community about the food that sustains us as individuals and groups. Usapang Pagkain is an intergenerational space that explores ways to focus on how our food can support our communities physically, nutritionally, emotionally, psychically, historically, spiritually and socially.”

42
Jared Rouben
Brewmaster
“Moody Tongue,” says Jared Rouben, “is a name that probably applies to most readers of the Big Heat list. It conveys the idea of a discerning palate, someone who’s concerned about what they eat and drink.” Rouben puts thought into his brews, many of which he designs to be food-friendly. “I approach beer from the perspectives of flavor and aromatics. So, if we’re enjoying Szechuan food, we prefer a beer that’s light and refreshing to cool the palate. If we’re pairing with French food, say, roast duck, we want complementary flavors, so I might go with a Belgian style that has a lot of cherry and plum to complement a rich, fatty protein.” The names of Moody Tongue beers reflect culinary technique, flavor, aromatics and beer style. For example, Sliced Nectarine IPA: with that naming strategy, says Rouben, “You know what you’re going to experience.”

43
Paul McGee
Beverage Director
Paul McGee and the team at Land & Sea Dept. are a major force in Chicago’s food and beverage community. Tiki concept Lost Lake earned its third consecutive James Beard nomination, and McGee anticipates that more owner-operated bars, especially those boasting a distinct theme or spirit, will open soon. Weekly training keeps staff techniques sharp and tastes diverse—from the spendy classics of Milk Room and Cherry Circle to the tropical vibes of his darling Logan Square bar and the newly-opened agave-driven Lonesome Rose. “Take what may be an esoteric or unknown ingredient and talk about it in an approachable manner,” he says. “We are here to make everyone feel included and increase our guest’s knowledge and awareness.”

44
Nate Henssler
Chef
Many chefs draw on past experiences to inform their most innovative and compelling dishes. For Nate Henssler at Portsmith, experiences in India subtly influence his menu. “In the late 1990s,” Henssler remembers, “a buddy invited me to India for a wedding. I stayed for four months. Now, I have the confidence to use South Asian flavors combined with French technique. For instance, I’m serving a calamari Vindaloo with mango pickle and raita, a seasoned yogurt. We’re a seafood restaurant, and I had been dragging my heels on serving a fried squid dish, but we’re in River North and we want to give people what they want.” What’s cool is that this untraditional dish is not found in India; you may be able to enjoy it only at Portsmith.

45
Jean Joho
Chef
In its fourth decade, fine dining remains relevant and refined at the appropriately named Everest, located at the summit of the Chicago Stock Exchange building. Under Jean Joho’s reign, the restaurant is poised for continued growth. The formally trained chef has earned countless laurels, leading Chicago into a new era of cooking and creativity. High-caliber cuisine no longer demands tablecloths and vested servers, but Joho has always understood that evolution requires consistency.

46
Tom Van Lente
Chef
Tom Van Lente is flying solo. He made a name for himself in the Chicago dining community working at TWO, White Oak Tavern and The Winchester. Despite his successes, he felt restrained in a restaurant kitchen, so in 2017 he opened his own catering and consulting business, TVL Culinary. Busy from the beginning, Van Lente has met challenges in going it alone: “Every single time I do an event, I have to start from scratch,” he says, bemoaning the loss of a professional kitchen. But it’s clear he’s reveling in newfound freedom. “I’ve never been able to showcase hospitality as strongly as I can now,” he says. TVL Culinary fills a gap in services he saw while working for others, and Van Lente is excited to build on the opportunity as well as provide a model for others. “This is a tough industry; that’s no secret,” he says. “I like being the one to step out of the box. Maybe others will follow.”

47
Phillip Foss
Chef
Phillip Foss just wants to have fun. After eight years and copious accolades, the chef at El Ideas who “cooks dinner like no one else in America” (according to Eater), still finds time to meditate and play chess when he’s not in the kitchen. When it comes to cultivating staff, he prefers guidance over heavy-handed rule: “The more you practice,” he says, “the better you will be.” And don’t expect to see Foss leave his Tri-Taylor post any time soon: “I know this is anti-capitalistic, but I really want to leave El exactly where we are: innovating frequently and bringing fun into fine dining.”

48
Julius Thomas
Chef
The line at Jerk Taco Man is long; Julius Thomas’ kind of jerk—usually offered in a taco—is very popular in his West Garfield Park neighborhood. The secret to his success, he believes, is that “no one ever did something like this before. Outdoor cooking has always been a joy to me, but to see so many smiles on so many people’s faces, that orgasmic experience in their mouth that my menu has created, it’s so gratifying.” In his jerk crab leg, the sweetness of the meat pairs well with the heat of Thomas’ signature sauce, which is created with “a blend of over twenty spices. The spices fuse with butter for a jerk flavor with a mild heat.” Thomas plans for his operation to go worldwide, and he’s already opened a second location in Chatham. Still, “The Jerk Taco Man way of life is to stay humble!”

49
Jesse Diaz
Coffee Roaster
Jesse Diaz, the founder and president of Dark Matter, one of Chicago’s finest coffee roasters, believes his biggest successes are “the development of our fermentation program using coffee from our partner in Guatemala,” and, in the product area, “the Ghoul Screamer, which was our collaboration with Kirk Hammett of Metallica and David Karon and their gnarly guitar pedal company KHDK.” Dark Matter’s success so far is only a beginning, Diaz says. “We have a lot of room to continue our mission of producing not only amazing coffee, but reinforcing the fabric of our Chicago culture via art, music, community and diversity. We will open a store or two in 2018 here in the city. Eventually, we will do some fun stores outside of Chicago. But not this year.”

50
Tony Fiasche
‘Nduja artisan
We’re not over-blessed with quality Italian delis in the Midwest. Publican Quality Meats veteran Tony Fiasche is trying to close that gap in the space of one cozy storefront at West Town’s Tempesta Market. Chicagoans are talking about ‘nduja, a Calabrian confluence of salumi and andouille that packs spice and rich fatty pork. Fiasche and his father and co-owner Agostino also own ‘Nduja Artisans in Franklin Park, where the namesake pork butter is produced and then distributed throughout the Chicago area. Everything at Tempesta is made at ‘Nduja Artisans or sourced from high-quality producers.