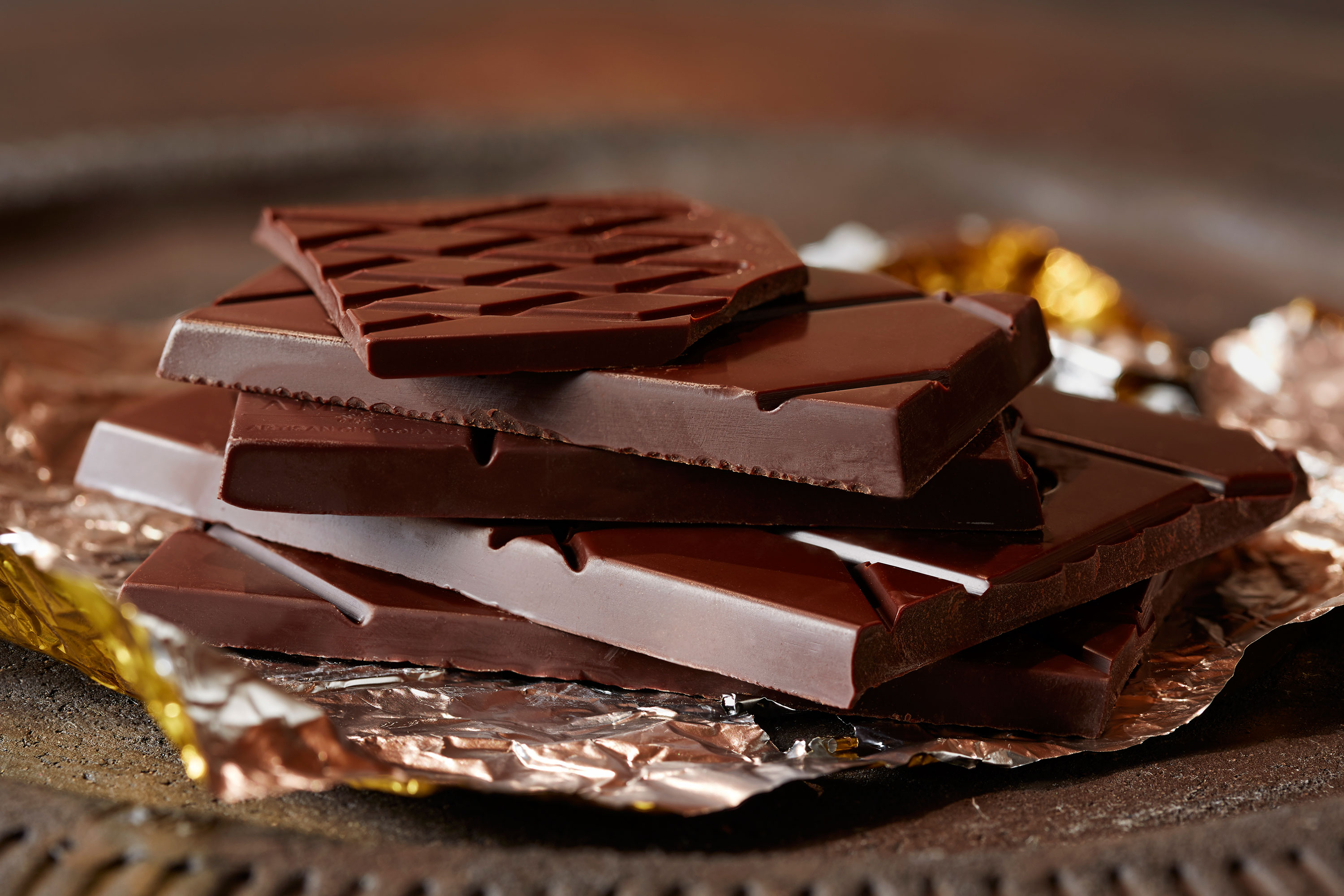 Walking past Kim Hack’s Cocoa + Co. (1651 North Wells), you might think it was just a neighborhood café. Step inside, however, and you’re presented with all things chocolate—truffles and bonbons in myriad shapes and colors, displayed like jewels in a glass case, meticulously chosen by Hack from top chocolatiers. Patterned boxes filled with caramel and cream-filled candies stand at attention on the shelves. Multiple drinking chocolates line the menu, original recipes that Hack herself perfected.

What truly draws the eye is an entire wall covered in chocolate bars, around 150, artistically packaged, some with minimalist lines, others with swirls of impressionist pastels. They come from all over: Madagascar, Belize, even India. They’re all beautiful, and a little overwhelming. This wall reflects Hack’s belief that “chocolate lovers want that same sense of discovery that wine lovers want.”

She’s talking about terroir, how the place of origin shapes the taste of the final product. Though terroir is commonly referenced when discussing wine, it’s not often brought up in conversations about chocolate. Hershey, Pennsylvania is as specific as you’re likely to get from most people who might discuss chocolate origins. Hack would like to change that.

Hack’s experiences in the wine industry helped shape her vision for the chocolate shop. After careers in advertising and brand management with Quaker and Amoco, Hack made a transition to wine. Working closely with esteemed winemakers like Angelo Gaja and Michel Chapoutier, she traveled often through Europe, indulging her private passion for chocolate by discovering small chocolatiers and chocolate makers along the way.

“It was when I was coming back from a trip working with both [Gaja and Chapoutier], just steeped in the French concept of terroir” remembers Hack, “that I was struck with the idea for Cocoa + Co.”

Soaring over the Atlantic, reading an inflight magazine, Hack found an article that set off a spark of inspiration. It was about a man growing cacao in Hawaii, and it spoke specifically to how soil and climate—in other words, terroir—affected his efforts. “This was August of 2001, and nobody in the United States was talking about chocolate that way,” Hack says. “Even in Europe, there were very few people who were focused on it.”

It was an “Aha!” moment that changed Hack’s future trajectory. The idea simmered in her head for years, but she did not act immediately; the post-9/11 world was not an ideal atmosphere to seek investment. The ambition never left, and finally, fourteen years later in 2015, she took her life savings and opened up Cocoa + Co.

The importance of origin is deeply embedded in our understanding of what makes a wine what it is. “It’s a sense of place,” says Jennifer Wagoner, sommelier at Chicago’s Sepia and Proxi. “It’s the bacteria, the biological processes, the fungi, the soil—it’s the history and culture as well.”

There are a lot of rules defining origin in wine. Europe’s long history has created delineations between regions and their wines. In 1935, for wine, the French formalized the appellation d’origine contrôlée, the protected designation of origin. “In Europe, they’ve taken the time to understand that there are differences in the grapes that are grown, differences in the spaces in which they are grown,” says Wagoner. “This system [of regulation] was put in place because winemakers want you to have a sense of what to expect from a region. They want people to understand that when they are tasting a wine, it was made with all of these rules in mind to create this specific flavor profile or mouthfeel or expression of the varietal.

“That’s why there are classic varietals, classic wines,” she adds. “It keeps it clean. A classic Chablis should always taste this way; a classic Northern Rhône wine should taste that way.”

The coffee industry also leans on the origin and consistency of flavor profiles. This emphasis gained steam in the 1990s with so-called “third wave” coffee, a movement of treating coffee as an artisanal product as opposed to a commodity. While that mindset is now more mainstream, there’s still a lack of appreciation for how origin affects the brew you pour.

“For the most part, [origin in coffee] still eludes a lot of people, because they don’t know what it means,” says Xavier Alexander, who co-owns craft roaster Metric Coffee Co. with Darko Arandjelovic. Both men make origin a central focus, educating consumers through weekly cuppings about what origins mean for a cup of coffee.

It requires regular exposure to see the patterns of flavor emerge. “A country like Colombia and a country like Kenya might have similar varietals, but because of the difference in soil, altitude and process, the varietals will yield different results and profiles,” explains Alexander. It explains why you’ll see bags of coffee categorized by country. The characteristics of a region are reliable. For example, you can expect a Kenyan coffee to be bright and fruity, while a coffee from Brazil will have more body with chocolatey notes.

“We already have in mind what kind of coffee we want from a region,” Arandjelovic says. “Every country has a certain flavor that is known.”

As the concept of origin starts to take hold in the chocolate industry, Hack admits that there are aspects of the process that make categorization hazier than it is with wine and coffee. One influence is pollination. “Think of it as free love versus self-love, if you will,” Hack laughs, comparing the biology of chocolate and wine. “Grape vines are self-pollinators, so they keep the genetics consistent. Cacao can be fertilized by the pollen of another tree, so if you have other genotypes nearby, that can muddy the impact of terroir. Every grape on a vine has the same genes, but cacao pods on the same tree can actually be genetically different.” Coffee straddles the middle. Of the two commercially grown varietals, Arabica coffee is self-pollinating and produces the higher-quality, more sought-after beans with distinct flavor profiles used by specialty roasters who focus on origin. Robusta, the bean used in cheaper, mass-produced coffees, requires cross-pollination.

For chocolate, this means that understanding the origin of a bar is not as simple as slapping the name of a country on the packaging. Each step in the process, from fermentation to drying to crafting the bar, changes the story. Knowing the plantation from where the beans are sourced and the philosophy of the chocolate maker using them are more indicative of what to expect in a product.

What unifies origin across all three industries is the ability to tell a story beyond the traditional definition of terroir and draw consumers into a deeper connection with the product. “The best part of wine is not necessarily a flavor, it’s a feeling,” says Wagoner. “You’re thinking about who’s making the wines, who the family and grape growers are. I’m thinking about all those things when I make my wine lists because that’s the story you want to tell. If there’s excitement, care and passion behind wine, I feel like you can taste it.”

Alexander and Arandjelovic echo the sentiment. Metric Coffee deals in direct trade with plantations, allowing them to develop relationships with their growers. That familiarity and passion translates into coffee that tells a worthwhile tale. “Bringing those relationships into a bag for people to take home, so they can live vicariously through our experiences,” says Alexander, “is why we’re really fortunate to be doing what we do.”

The origin of chocolate is a natural vehicle for telling unique stories, and Hack is a driving force in furthering those discoveries. She hosts terroir tastings at Cocoa + Co. and has developed a terroir-at-home tasting kit, complete with tasting mats, information on origins and makers, and access to a web portal with uploaded guides to walk your party through different regions.

To best establish the influence of terroir in this kit, Hack turns to a single chocolatier who focuses on featuring origin, master chocolatier François Pralus. Each of the four bars included for tasting is made with seventy-five percent cacao, and the same sugar to chocolate ratio, prepared using the same equipment. Thanks to those controlled variables, Hack explains, there’s a cleaner read on what origin is bringing to the bar.

In the tasting guide, Hack points out flavor “tells” and elements of terroir that influenced each type of chocolate. For example, the bar from Madagascar is most likely to be picked out in a blind tasting. There is a distinct, crisp citrus note, possibly attributed to the fruit plantations in the French colonial era that occupied the same acreage as today’s cacao plantations. The terroir of São Tomé and Principe, known as the Chocolate Islands, evolved a bitter Portuguese strain into a cacao with nutty, earthy flavors. The Indonesian bar owes its signature smokiness not to soil, but to the fires that dry the beans in the country’s moist climate.

“Origin [for chocolate] isn’t cut-and-dried, but it’s still a worthy concept to explore,” says Hack. “Most people think of chocolate as this monolithic flavor, but much like wine, as your tasting history becomes broader and your palate more educated, you will begin to sense the nuances.”