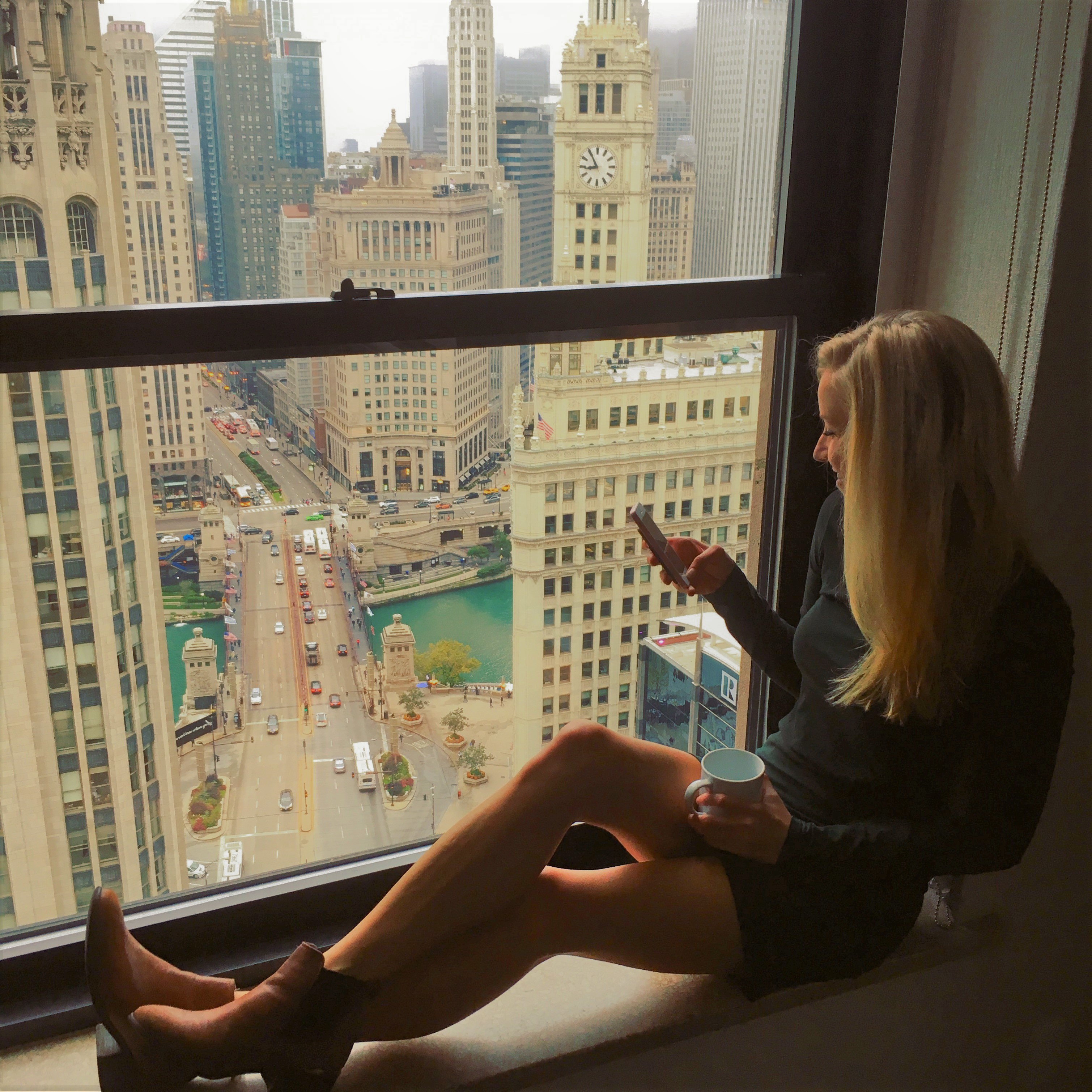 The author writes about and photographs Chicago for the Moon guide series / Photo: Rebecca Holland

Chicago never felt that big to me.

Then I wrote a guidebook about Chicago.

Chicago is huge! Okay, that’s not a major revelation, but at 234 square miles, it’s no wonder Chicagoans get accustomed to staying in their neighborhoods. How could you see, do and eat everything in this giant city? Still, that’s what I was hired to do: leave my neighborhood every day for a year and spend extensive time visiting museums, tasting foods, taking photos, asking questions of shop owners, then distilling it all into a 237-page Moon guide.

I make my living writing about travel and food around the world. I thought writing this book would be easy. I’d already covered plenty of restaurants and sights for publications and my own travel blog. Turns out, it was not easy at all. To start, there was too much, with places opening and closing all the time. It was difficult to determine if entries would be outdated by publication.

Did you know that Chicago has seventy-seven neighborhoods? I could include only a handful in my book. That was a struggle.

I had done a decent job over the previous few years spending time in neighborhoods other than my own, but with more than 7,300 restaurants and hundreds of galleries and museums, there were inevitably places I’d never heard of until I put out a poll asking people for their favorite spots in their area. Guess what? Many of them aren’t on most lists about Chicago, and some of them turned out to be fantastic. 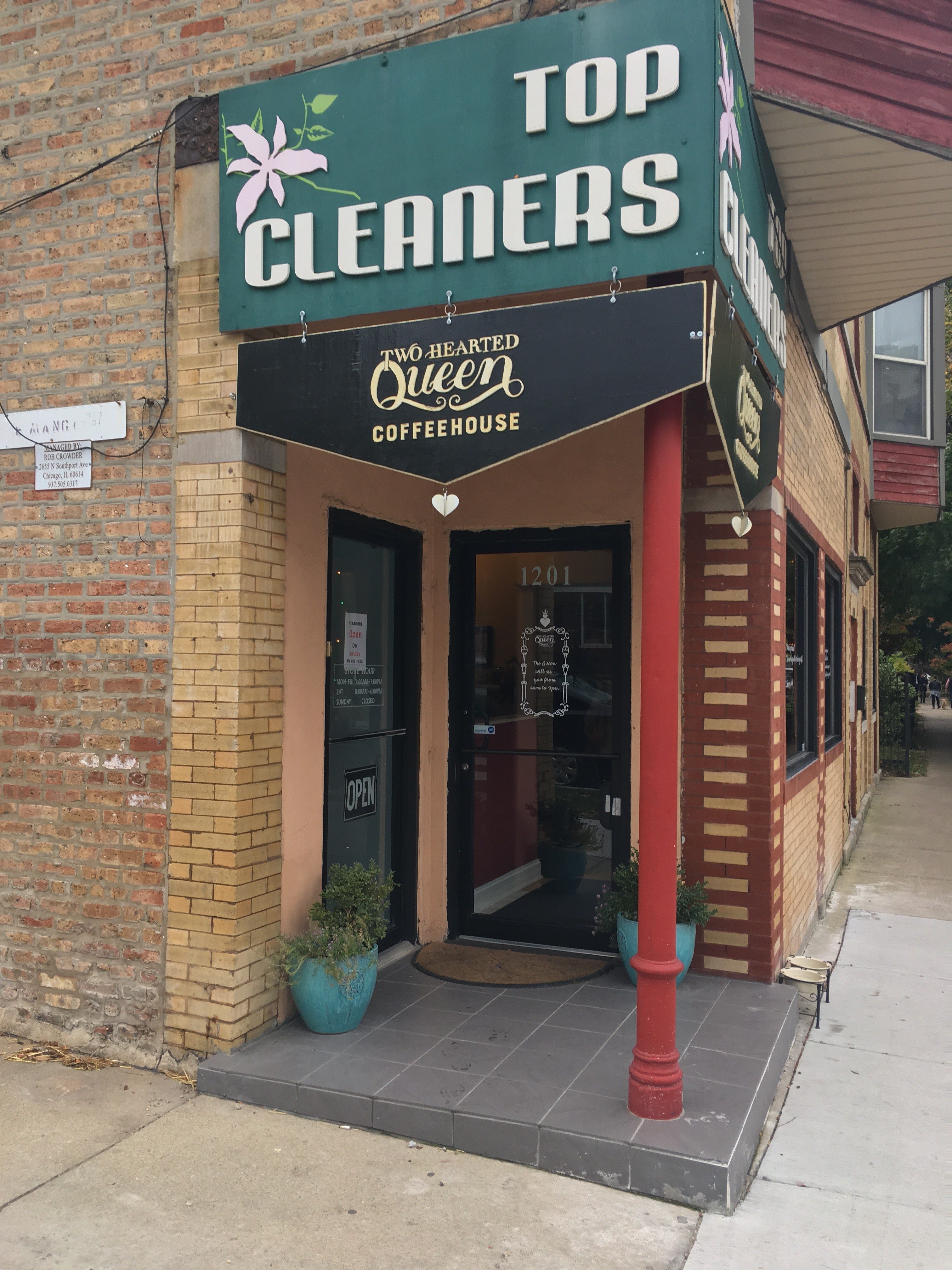 Two Hearted Queen in Lakeview, for example, is now one of my favorite coffee shops, not only for its big mugs and living-room vibe, but also because it’s one of the least pretentious around. Plus, if you draw the queen of hearts from the deck of cards by the register, you get fifty-percent off. Also in Lakeview, Rewired Café serves a bacon, egg and cheese breakfast croissant that’s worth the Seamless delivery fee. I know, because I ordered it for months before realizing the café is across the street from my best friend’s house, and when I finally went inside, I was happy to find a small shop that smelled of butter and that presents live cello music on Sunday mornings.

In Wicker Park, Volumes Book Café combines three of life’s pleasures: coffee, wine and books. The shop, which was opened by two sisters, has shelves of books scattered throughout, which you can read while sipping wine or local beer, or buy to take home. The café also hosts readings, a trivia night on Mondays, and a book club. If you work from coffee shops, try adding The Lounge at the Robey to your rotation. For a four-dollar coffee (Wicker Park and Bucktown residents get a twenty-percent discount), you can relax on the stylish furniture and get distracted by the views through the floor-to-ceiling windows. Nearby, Enoteca Roma serves some of the best Roman food I’ve had since living there years ago; the place brings back memories of piazzas and trattorias. 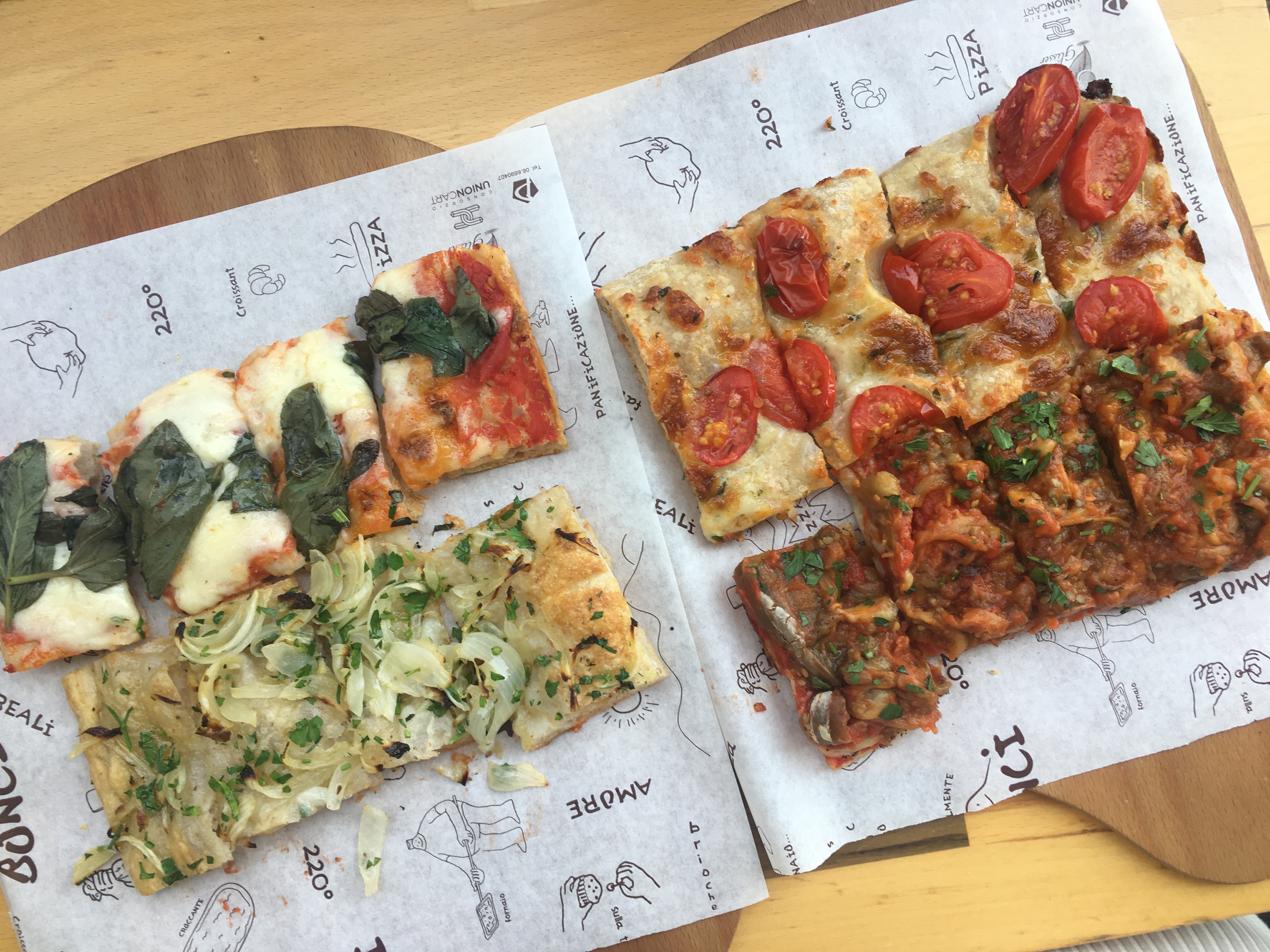 Speaking of Italian, if you haven’t tried Bonci in the West Loop, do it this week. The scissor-cut squares are a testament to how, with fresh ingredients and good dough, something simple can become transcendent. Plus, the crust is unlike anything else you’ll find in Chicago.

In River North, Caffè Umbria is a quiet, attractive respite from the chain lunch spots and Starbucks saturating the neighborhood. Their coffee cups are made for Instagram, but it’s what’s inside that counts: the espresso is strong and expertly pulled.

At Revival Food Hall in the Loop, I ate way too many grilled-cheese sandwiches at The Fat Shallot as “research,” and was delighted to find I could get Mindy’s Hot Chocolate baked goods at Hot Chocolate Bakery without reservations or the trip across town. 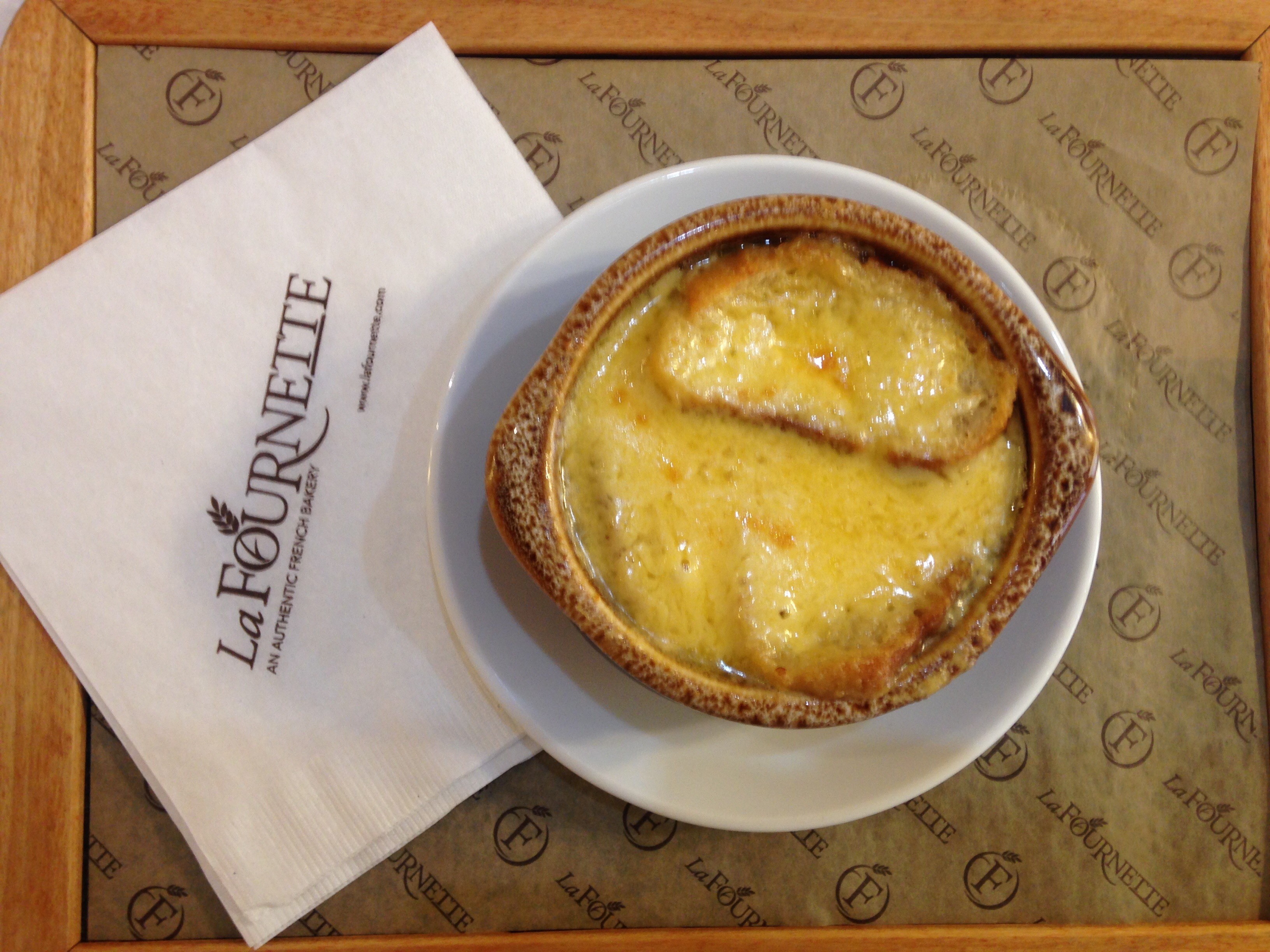 In my own Gold Coast-Old Town neighborhood, I tell everyone to go to La Fournette. It doesn’t need my promotion, but if you haven’t been, the crusty breads and flaky croissants make it easy to see why owner Pierre Zimmerman is a world baking champion. I was in India last month talking with a woman from Alsace, France, who mentioned that a friend from her town owned a French bakery in Chicago. It was La Fournette! She raved about his breads and pastries and called them “a true taste of real France.”

I hadn’t heard of Sparrow, also in my neighborhood, but needed more cocktail bars for the Gold Coast-Old Town section of the book, so one day I wandered in. Now I’ve become a regular for their 1930s-era cocktails and refurbished 1927 art deco building.

Then there’s the list of things I always meant to do but hadn’t. The “Chicago” list I have on my phone is built on the assumption that I’ll live here forever and will eventually find time to cross everything off. You probably have a similar list, even if it’s only in your mind. The 360° Chicago Observation Deck (formerly the John Hancock Observatory) is terrifying, touristy and fun. Same for Shakespeare In the Park. Pack a picnic and watch a free Shakespeare play from a park near you (check the schedule for rotating parks). It sounds as lovely as it is.

Putting together the guide, I found myself in a classic dilemma: the things locals love about a city and the things tourists should see are not always the same things. Was I tempted to tell people to skip Navy Pier and Willis Tower and spend their time elsewhere? Of course. Did I want to encourage everyone to visit places outside the normal tourist reach, like Andersonville or Bridgeport? Yes. The editors said “no,” that people come to Chicago for iconic places, and that far-reaching neighborhoods were unrealistic for most tourists who only have a few days, which is probably true. It pains me though, because I would have included Chicago-style barbecue at Uncle John’s Barbecue on South Cottage Grove, Carnitas Don Pedro and HaiSous in Pilsen, and Maria’s Packaged Goods & Community Bar in Bridgeport. I would have included at least a dozen places on Devon Avenue, but got a similar spot in by mentioning a restaurant that a taxi driver introduced me to on Halsted in pre-Uber days.. With the confusing name Flaming Wok ‘N Grill, the 24/7 restaurant serves heaping plates of Indian and Pakistani dishes. There’s a menu, but the owner will talk you into the daily special.

There were times while writing the Chicago guide when I wondered what I had gotten myself into, but in the end everything I thought I knew about this city was reinforced times ten, from our fascinating, sometimes criminal history to the immigrant contributions obvious in so much of our cuisine. The more I learned, the more I loved calling Chicago home. We rarely get to see our own city with a tourist’s eyes, but I encourage you to try. You probably don’t need a guidebook to the place you live in but reading one just might make you see the city in a new light, or at the very least inspire you to explore.