September 1971. The harvest-ready vineyards in Burgundy’s Côte d’Or glow golden in the morning light, as they have for centuries. We’re bumping and rattling along in a French school bus, and, yes, they’re yellow in France, too. Bleary-eyed, we struggled awake before dawn to trundle off to Beaune, scheduled to stop by several wineries and then on to the Hospices de Beaune, a fifteenth-century almshouse. None of us really seems to know much about where we’re going. One of our group thinks we’re going to Bonn, West Germany. Kids.

Hospices, despite the name, were less a hospital and more a waiting room for those destined to step into eternity sooner rather than later. Few of the poor who were once housed here would have been physically “healed” in any modern sense of the word. They could, however, cure their own souls by making a deathbed confession and receiving absolution. To encourage those redemptive last words, it was usual to decorate such penultimate abodes with paintings of final abodes, blissful heaven and, most importantly, burning hell, the better to inspire the deathly ill to reflect on their sins and repair their souls before death comes a-knockin’. 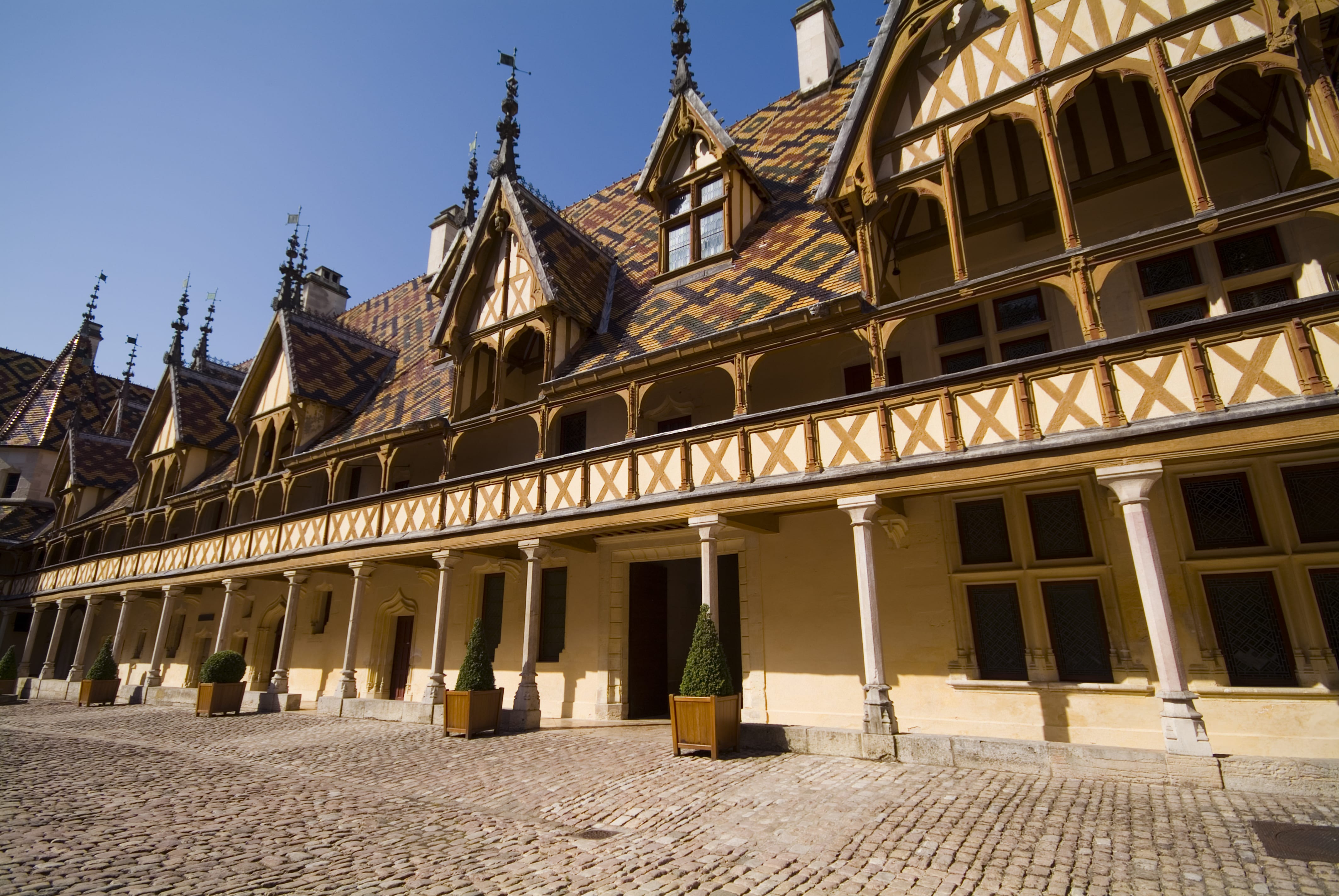 Arriving at the Hospices, our group wanders from room to room until we come upon a shadowy chamber. At some point, everyone leaves the room and I’m left standing in half-light in front of the big painting dominating the space. It’s “The Last Judgment” by the Flemish artist Rogier van der Weyden.

An electric chill runs through me.

There, without room for equivocation, coldly staring are the impassive eyes of the Archangel Michael, whose gaze rests in vertical alignment with those of Christ, hovering above, weightless, seated on a rainbow, toes resting gingerly on a golden orb.

There’s a whole lot going on in this painting: angels flying and blowing trumpets, a celestial congregation of saints and other holy people, peanut gallery witnesses to the main event of resurrected souls trooping off right and left. The artwork’s focal point is the severely judgmental regard of the Archangel, whose wings sweep behind him, mottled, almost reptilian. His poker face reflects his unrelentingly sober nature, at the very top of the Great Chain of Being, deciding by divine direction where each of the risen souls will spend eternity. Michael, unlike the forgiving Gabriel, is an avenging angel, so he’s the one holding the scales of justice with surgical care in his fingertips: if your soul is heavy with sin, the scales dip and you take a short trip to a long, hot eternity; if your soul is virtuous, you rise to eternal salvation. It’s a simple equation, depicted in paint.

The saved ascend stage left, Christ’s right (the good side), and the damned descend to his left (the bad side). There are many more damned than saved souls, so the odds are not in our favor. Goddamn if most of us are not damned. I felt like I could easily fall in line with those gnawing their hands and slinking down to Hell.

Although I was surely convinced of my damnation standing before this work of powerfully propagandistic religious art, I was at this time in my life relatively innocent, practically almost a virgin. I did not then, and do not now, identify as a Christian.

The painting—created specifically to hang in this space—is like a schematic of the Christian world view, a spiritual justice machine that maintains cosmic balance by exactly measuring the relative purity of souls. It’s inevitable. It’s science. No negotiating here. No ambiguity. No plea bargains. There used to be time, but now time has passed. This is the end of time. You weren’t purified before your death? Oh. Sorry. You’re totally screwed. Forever.

Overall spreads a glowing fireball, billowing out, an all-encompassing holy mushroom cloud, shimmering gold and red in chromatic resonance with the colorful Burgundian vineyards we passed earlier that morning. Reminiscent of the dimensionless golden backgrounds of Byzantine and Early Renaissance painting, this auric thermonuclear thunder-blast brings into the present day the actions portrayed in the painting. It seems to me at this moment that artists—the antennae of our race—saw our end coming long before Enrico Fermi ever broke the atom under the old Stagg Field at the University of Chicago?

At this time in the early seventies, we were dead-center in the Cold War era. A few years before, President Nixon had sent B-52 bombers loaded with nuclear bombs on a mission to circle the polar cap and scare the Soviet Union. This was in line with Nixon’s “Mad Man” self-portrayal as an out-of-control maniac who just might push the button at any moment. Ultimate annihilation was not an impossible-to-conceive outcome. All in my generation grew up in duck-and-cover fear of instant incineration by Soviet missiles. Many of us still quake when we hear the sirens blare or the beep-fuzzy buzz of the CONELRAD alert, the soundtrack of Armageddon.

I’m deep into this eschatological panorama when I hear my name: “Monsieur Ah-mon. Monsieur Ah-mon!” The group is headed out to eat.

We arrive at what looks like a modest auberge with no signage. We enter through a crude and creaking wooden door and trudge up a long staircase to the second floor. On the landing, we pass the water closet, a small room with a hole in the bumpy cement floor, the kind of lavatory you’d encounter now mostly in developing countries. This is a humble space, much older than just old-timey. The chairs are worn wood, hard, functional, though comfortably ancient. We take our places around a large table, waiting to be fed.

A round French motherly woman in a worn smock ambles up to our table and puts down a large cast-iron pot. It’s filled with chunks of veal and sliced carrots in gravy, blanquette de veau, a Burgundian classic. The green beans are greener than I’ve ever seen, and they might have been the first fresh ones some of us had ever tasted, noodle-thin in the French tradition, cooked lightly, just a little crunchy. Of course, there are bottles of local red wine, probably Pinot Noir, though the bottles are unmarked. There’s a large round of soft-ripened cheese, and of course crusty French bread, the most fabulous bread in the world, the platonic ideal to which all other wheat breads are insubstantial shadows.

I’m thinking these foods set before me are the most delicious things I’ve ever eaten; the veal moist and succulent, coming off in strings on the fork, and the cheese with a creamy tang that kisses the tastebuds much more deeply than the Kraft extra sharp cheddar served in my Midwestern home. The wine proves an ideal accompaniment, balancing their richness, cleansing the palate between bites and getting the mouth ready for more. And more.

Finishing the last crust of bread, which I sponge around the veal pot, I quaff my last full mouthful of wine and realize this is my eucharist: tasty food. Eating well is perhaps not the surest way to secure a spot in vaunted heaven but it may as well be the way to live our best lives on earth.

Eat, drink and be merry has become a policy of mine since the time I stood in front of van der Weyden’s “Last Judgment.” A superficial response? Perhaps. But about tomorrow, who knows, many of us may begin doing time in a fire-fueled eternity. Just the thought of it makes me hungry.

Years after this descent into damnation and rise into deliciousness, I was served the blanquette de veau at Le Francais in Wheeling, the restaurant some say put Chicago on the culinary map. It was prepared to perfection, but it didn’t match the dish I’d had years earlier in Burgundy. No dish ever will.

May 2018. At The Press Room, I’m meeting with representatives of the Bourgogne wine region. One of the group, Virginie Valcauda, lives in Beaune. She tells me she recently took her young son to see the Hospices de Beaune. The boy, she remembers, was frightened by the painting of the Last Judgment. That evening, when she was tucking her son into bed, he whimpered, “Please, mommy, don’t ever take me to that place again.”

Me, I sleep beneath a small framed picture of van der Weyden’s “The Last Judgment.” This painting, for me, is no mere medieval memento mori but more a reminder that we should eat and drink as much good stuff as we can during our brief span under the sun and above the soil. A delicious meal may very well bring us as close a place to heaven as most of us could ever hope to be.