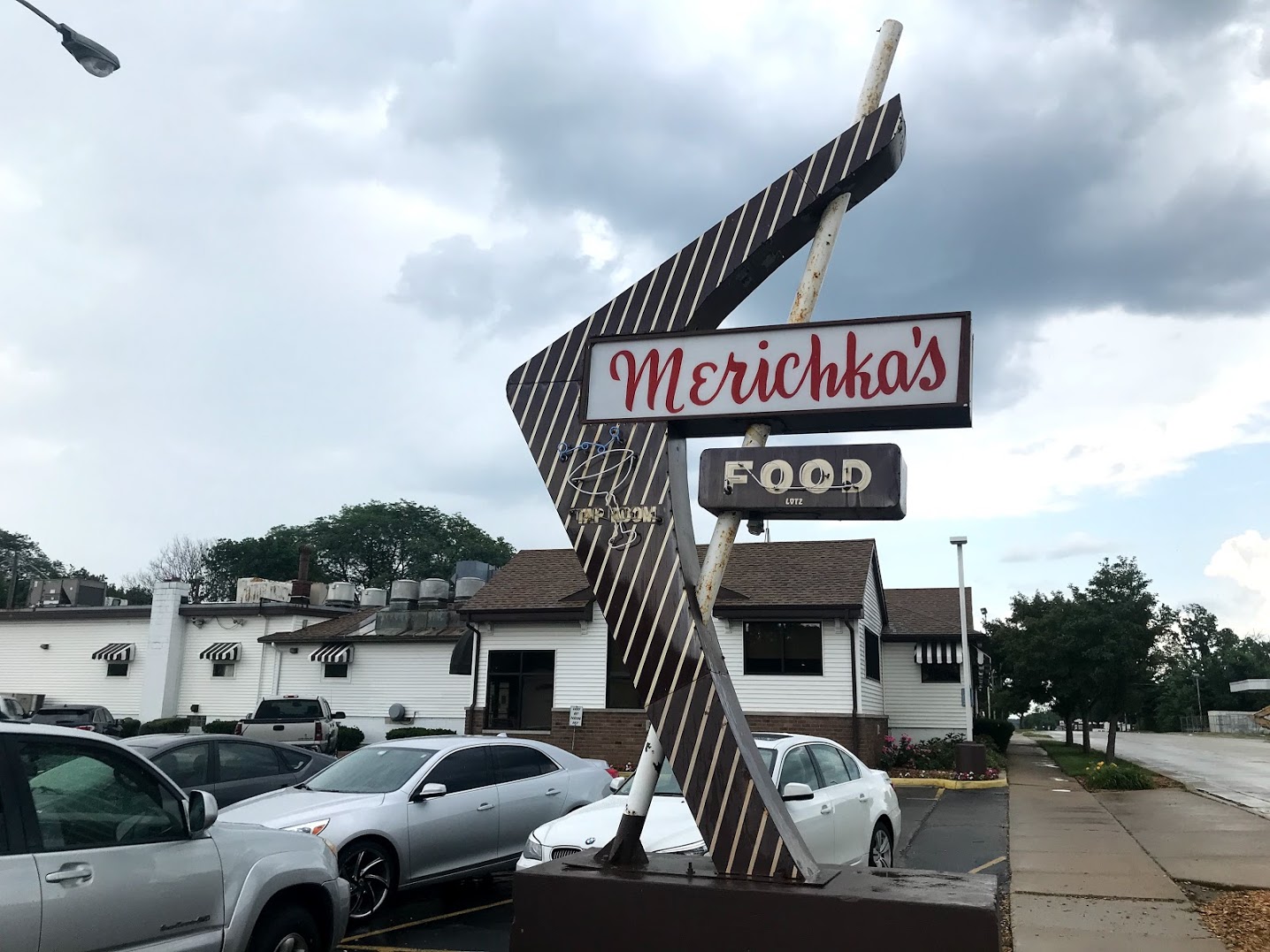 Merichka’s is in Crest Hill, near Romeoville, along a leg of old US 66, down the road from White Fence Farms, another old-timey Southwest Side dining institution.

Merichka’s is the type of place where on any day, multiple generations will be sitting around the table together. It’s like dinner at home. You can keep your baseball cap in place throughout the meal. Feel free to burp. Get comfortable.

It’s a roadhouse restaurant, and in the smaller room near the windows where we were seated, there were six or so tables, half occupied by grandparents, parents and their children. At those tables, two contingents of grandchildren each included one very loud little boy and one frazzled mother hushing her child. Hushing was unnecessary because this is a family place and all families, at one point or another, have had a screeching kid at the table. Others with families understand. That crying kid might be a neighbor. If this kind of thing bothers you, Merichka’s is not the right place for you.

The families that have been going to Merichka’s for years have an unabashed fondness for the place. Here are the first three customer testimonials on the Merichka’s website:

Merichka’s…is similar to being part of the family. We all loved the poorboy.

Been eating “poorboys” at Merichka’s since the early 1950s. It seems like I took every homecoming, prom or dinner date to Merichka’s while I was in high school.

“Poorboys” were great. This place doesn’t change, which is what makes it great.

The unchanging nature of the place is, indeed, what keeps customers boomeranging back.

“Do you want onions and croutons on your salad?” asks our server, Emily, sweetly.

“Sure.” I say, though I couldn’t resist asking “But do people ever really have a problem with onions? I mean, I get that croutons are not for the gluten-intolerant, but onions…?” I ask incredulously, remembering Julia Child’s observation that “it’s hard to imagine civilization without onions.”

“Oh, yes, quite a few people ask to have them left off,” Emily explains “A few years ago, we started adding the onions, and some people just didn’t like it.”

“I can see how adding onions to a salad could really turn somebody’s world upside down,” I add, ironically.

Emily has worked at Merichka’s since she graduated from high school over fifteen years ago. She has other relatives who have worked at the restaurant over the years, and she met her husband there. The restaurant is still family owned, and “Little Joe,” as the current head honcho is known around the restaurant, is the grandson of the founder. This is a family place, and families come here to be together and eat food that’s solid and unsurprising, priced economically, which is especially nice for big families.

Merichka’s has been around since 1933, and the menu has changed little over the years. “We added chicken poorboys a few years ago,” says Emily, “because people think it’s going to be less calories (which it probably isn’t), but our big seller has always been the steak poorboy.” 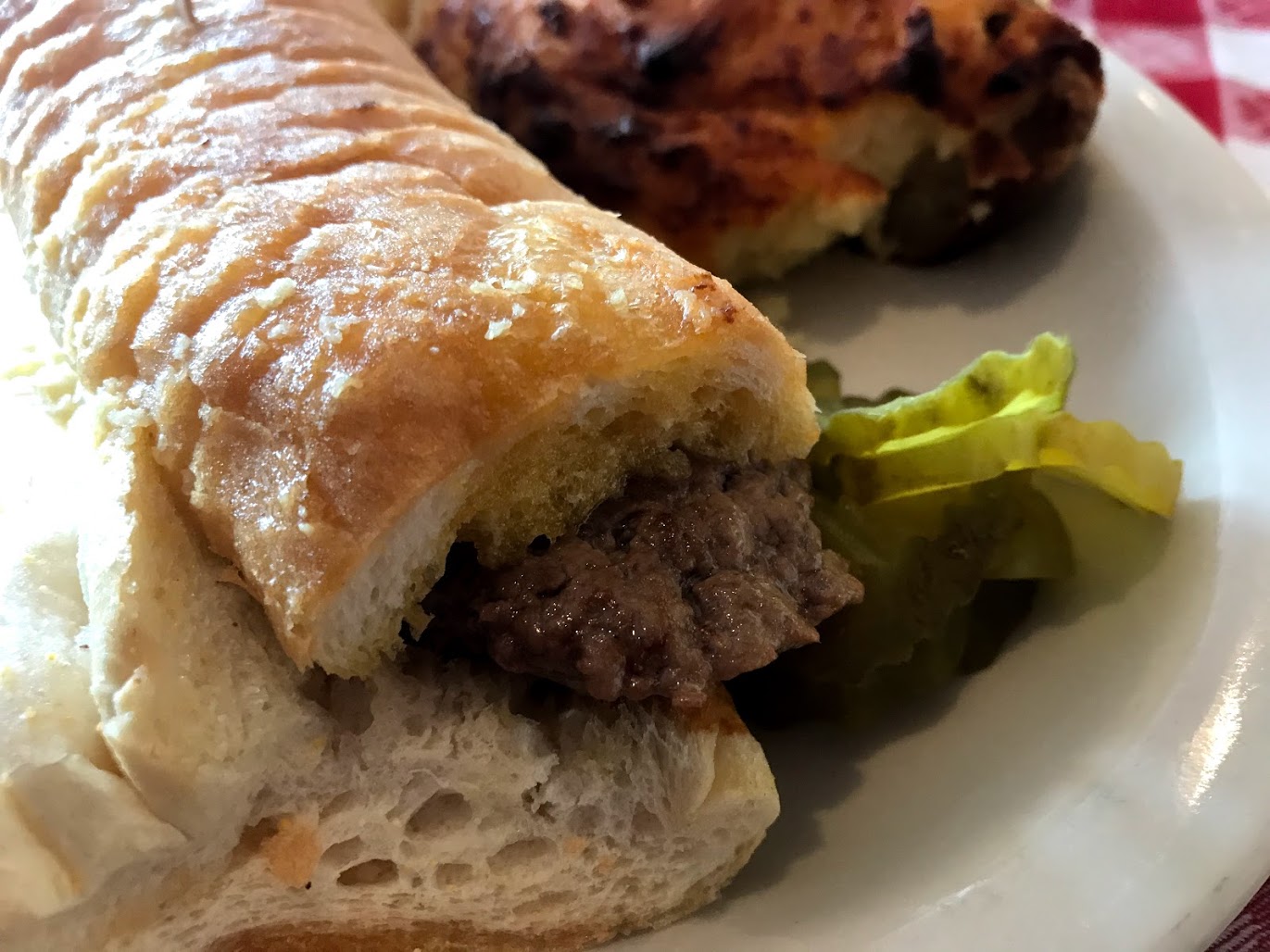 The steak poorboy is a long, slender and barely seasoned cube steak served on a French-type roll smeared on the inside with butterine, which makes this sandwich special. Butterine is, technically, imitation butter, a mix of margarine and butter, with more of the former, aged for a few weeks. The meat is butchered and the onions for the rings are cut and battered onsite. The relish tray is constructed of food-service items (beets, cottage cheese, and other traditional bites), and the twice-baked potato is notoriously dry.

Still, people love it. They love this food not because it’s a sterling example of kitchen art but because this is their place, and this is their food. This sense of possession explains the popularity of much regional cuisine: St. Louis pizza, livermush in South Carolina, Spam musubi on Oahu and deep-dish pizza in Chicago, a misbegotten over-the-top “casserole” (yes, Jon Stewart was right). Regional food may puzzle out-of-towners, but locals love it because it’s their own.

When a city, state or region has a signature dish that’s been enjoyed by locals for many years, it acquires a Teflon-like crust that makes it bulletproof to outsider criticism, like mine, and that’s just fine.

Despite the sentimental draw of Merichka’s food, the food is secondary to the experience of being in a place that’s been around since before most of Merichka’s current customers were born. Children grow up and bring their own children, and they eat the same as they’ve always eaten, and they’ve always eaten the steak poorboy. And they love it. It’s the same flavor they’ve enjoyed for years, and it’d be a big problem if it changed even a little. You want giardiniera on top, a sweep of Dijon mustard? Fine. But do that at home, okay?

As we finished our Sunday supper, one of the multigenerational tables got up to leave. When they paused near our table for a moment, we heard one grandmother say to another, “Too many onions. Too many onions.”

Clearly, those onions that went on the salads around a decade ago are going to take some getting used to. Still, for thousands of people on the Southwest Side, Merichka’s is where you go for the simple food you grew up with, the food you know, the food you love, because it’s your food.