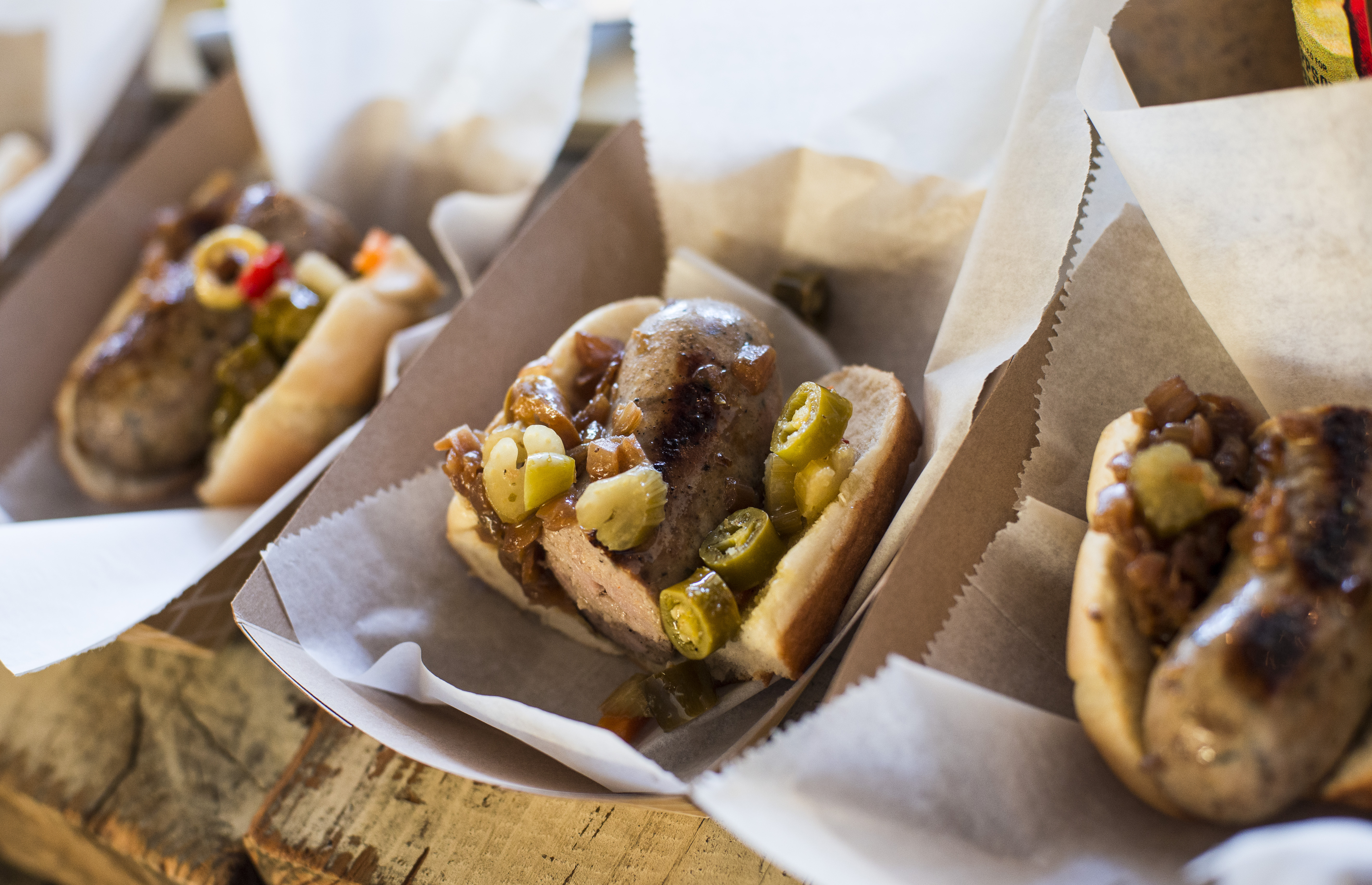 John Carruthers is a Newcity contributor and co-author of “Eat Street: The ManBQue Guide to Making Street Food at Home.” Carruthers also possesses a weird and wonderful culinary perspective. Recently, he let us know he was making sausage using Jeppson’s Malört, Chicago’s own notoriously odious sip. I had some questions for Mr. Carruthers.

Why in the name of God were you inspired to use the much-maligned Malört as an ingredient in wurst? I understand it was a dare, but you must have seen something in the liqueur that others did not.

It started, like all bad ideas, on Twitter. My favorite neighborhood dive, Nisei Lounge, was asked by an earnest fan whether they had ever tried to put Malört in a sausage. Nisei shot that question over to me, and sometimes all it takes is for someone like that to believe in you. I wasn’t not going to do it after that. I’ve worked on a few different sausages for my cookbooks and absolutely fell in love with the balance you can build within an encased meat. Malört is difficult to play with, as a lot of cocktail slingers around town have found, but it’s not impossible. Get past the hilarious reaction shots, and you get hints of pine, grapefruit, citrus rind. Sure, picking them up is like standing outside in a hurricane and trying to lip-read what someone across the street is saying, but they’re there. Fat and salt naturally give you another path around bitterness, and freshly ground whole spices can stand up to a lot. It’s my favorite kind of project: difficult, but not impossible.

Do you think Malört, as a beverage, deserves to be maligned?

I don’t. I think everyone who hates it suspects that we Malört drinkers are just trying to be ironic hipsters, but it’s quite the opposite. It’s a grown-folks drink for people who don’t need cinnamon candy or birthday cake in their bracing shot of hooch. It declares itself, sure, but it’s like a loud uncle you come to love.

What flavors or sensations did Malört bring to this sausage?

My biggest worry was that it wouldn’t show up. My second biggest was that it would overpower everything else. Finding the middle ground between those extremes was just the best. Put alongside some of these strong earthy spices at the end of a charred, fatty sausage, the Malört brings a clean bitterness that resonates with the citrus and spices and refreshes the palate in a way that reminded me of a hoppy beer.

Has using Malört to make your wurst started you thinking about other offbeat ingredients to use in your sausage making?

Anything and everything. I feel like if Malört can be balanced into something fun and tasty, anything can. A friend of mine from Kendall College collaborated with me a few years ago on a kind of Blut-Zungenwurst made of pastrami-brined pig tongues and beef blood. It’s fun to take something that seems like a dare and turn it into something people dig. I love a simple, classic Italian sausage or hot link as much as anyone, but the butcher down the road from me does it about as good as I ever could. So if I’m going to get all the supplies out and spend a couple hours grinding and stuffing meat, I might as well make it memorable.

Doug Sohn was one of the first tasters of your MalörtWurst. What’d he have to say?

So before we even got into the combinations of different toppings and condiments, he said “This sausage, from a technical standpoint, is made perfectly. It’s just really nice.” I mean, I can’t imagine a better outcome. I felt less sense of accomplishment graduating college. He was also a big fan of the Berbere seasoning and encouraged me to just sauce the heck out of the thing so the spice comes through alongside the tangy sport peppers and sweet caramelized onions, which I ended up doing at the pop-up. That was a great tip.

At your pop-up where you unloaded twenty-five pounds of the stuff, did hungry customers buy the sausage? What were you charging?

They did! We charged $7 per, and we were out with an hour left. You always wonder if your dumb dish or weird idea is going to even register with people, and when we hit the very end of that sausage supply, I was shocked. One guy purchased the last three sausages, but not at the same time. He came by, heard my spiel, and thought it was worth a try. He then asked to buy the second while eating the first. Then he walked away, came back, and said “I think I’d better take that last one.” I didn’t even get his name.

Carruthers is negotiating for a pop-up this fall featuring his sausage made of Malört. This is the kind of thing that Chicago foodists love: a way of turning a Chicago original into a food that reaches a larger audience, from moms with strollers as well to old men in dive bars who back up their Old Styles with a shot of the local, despised amaro. Elliot Bambrough, host of WGN’s “Chicago’s Best,” says of the sausage, “I really couldn’t stop fucking eating.”