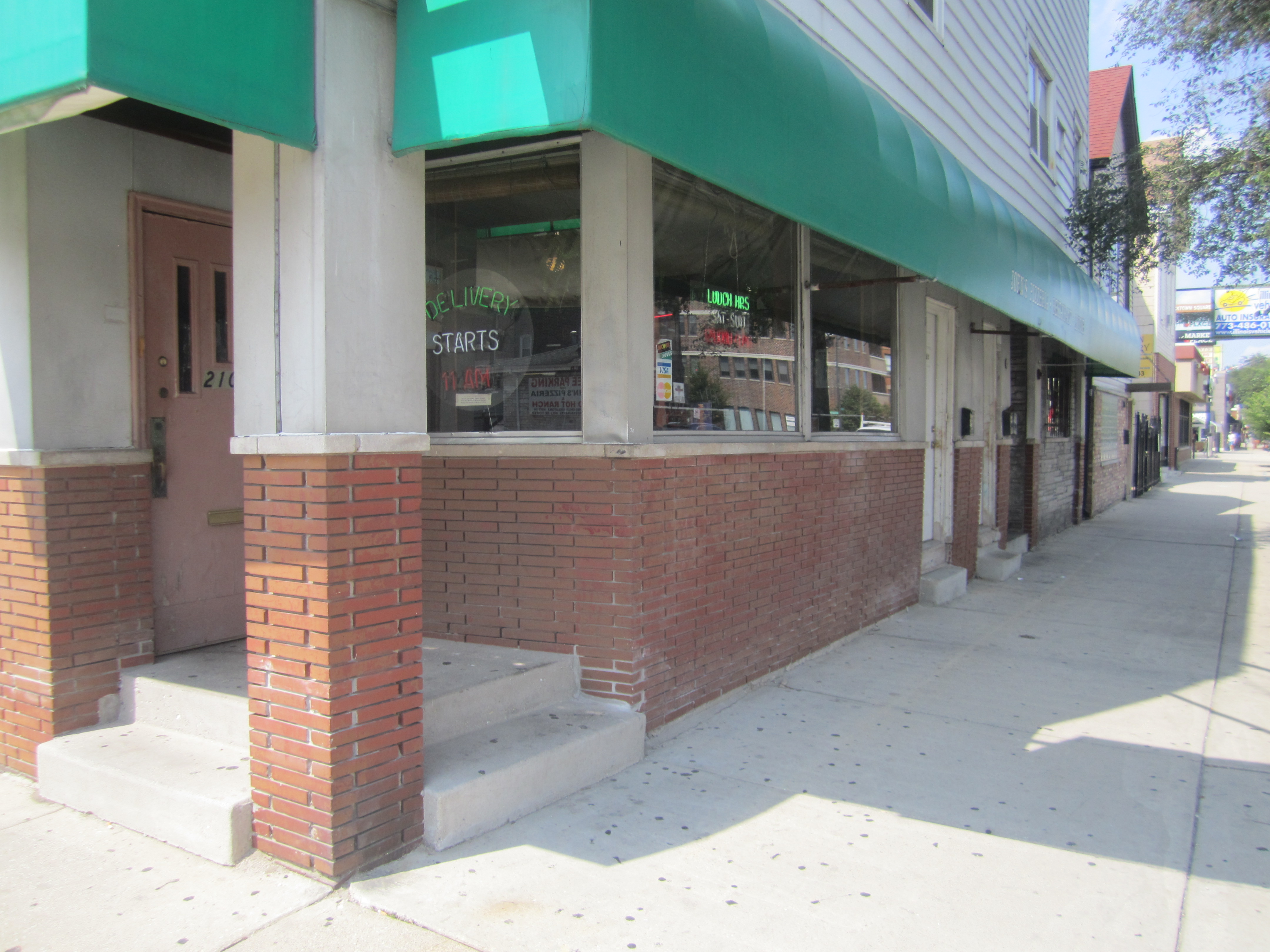 Marie’s Rip Tide Lounge was the kind of place you’d drive by hundreds of times without stopping. It was your typical Chicago neighborhood bar, known to locals, but to those passing by, likely known only by the funky signage, a washed-out image of a blue wave cascading over black-and-white barroom tiles.

Marie’s battered and bland exterior—with the blond bricks and glass blocks of so many Near Northwest side buildings—didn’t exactly beckon, but once you grabbed a red Naugahyde stool at the bar, you sank easily into the mellow vibe. The dimly lit space washed you in a wave that swept you back to 1961 when the place opened and Marie’s served their first can of beer.

Undeniably old school, Marie’s was cash only, with to-go six packs of cold Old Style, a jukebox and an old Zenith radio, original equipment that was probably playing WGN and WJJD the day the place opened. You could get a bag of chips from the back bar, which also housed not-for-sale porcelain dolls. If you wanted something more substantial to eat with your beer, you could order out. And that’s how we discovered the best pizza in Chicago.

Most Chicagoans will tell you that deep-dish pizza is mostly for tourists and teenage boys with unquenchable hunger and the unlimited capacity of a dumpster. I can eat a slice of deep-dish pizza now and again, and it’s just fine, but texturally it’s lacking, with the homogenized consistency of pudding.

Most Chicagoans, it is not too bold to speculate, prefer the thin cracker crust of what’s called “tavern-style pizza,” the kind of pizza I enjoyed growing up in Portage Park when almost all the pizza we ate was either bruschetta brushed with olive oil, which my Genoese grandma called “pizza,” or thin crust cheese and sausage. For years in Chicago, well before you could get pizza with goat cheese and arugula, thin crust was the pizza you ordered. The pizza came sheathed in a paper bag emblazoned with the smiling face of a jolly mustachioed man in a chef’s hat, and the pie was cut in a crisscross pattern—sometimes called “party cut”—that reflected the grid system of Chicago streets.

To this day, at least to my mind, the thin crust tavern-style pizza is as good as it gets. Sam Sifton of the New York Times came up with the Pizza Cognition Theory that states, in a nutshell, that the first pizza we have as kids becomes the paradigm for all pizza to come, the slice against which all other slices are measured. This argument for the obvious relativity of taste carries a lot of weight, supporting what seems the undeniable truth that claims of “the best” this or “the best” that are, fundamentally, impossible to prove.  It’s like asking “what’s the best movie ever made” or “what’s the best poem ever written”? Absurd questions, which some feel they have the authority to answer.

We enjoyed the best pizza in Chicago at the place that used to deliver to Marie’s, and it’s got the equivalent quotient of curb un-appeal. People aren’t drawn to this place for anything other than the pizza. 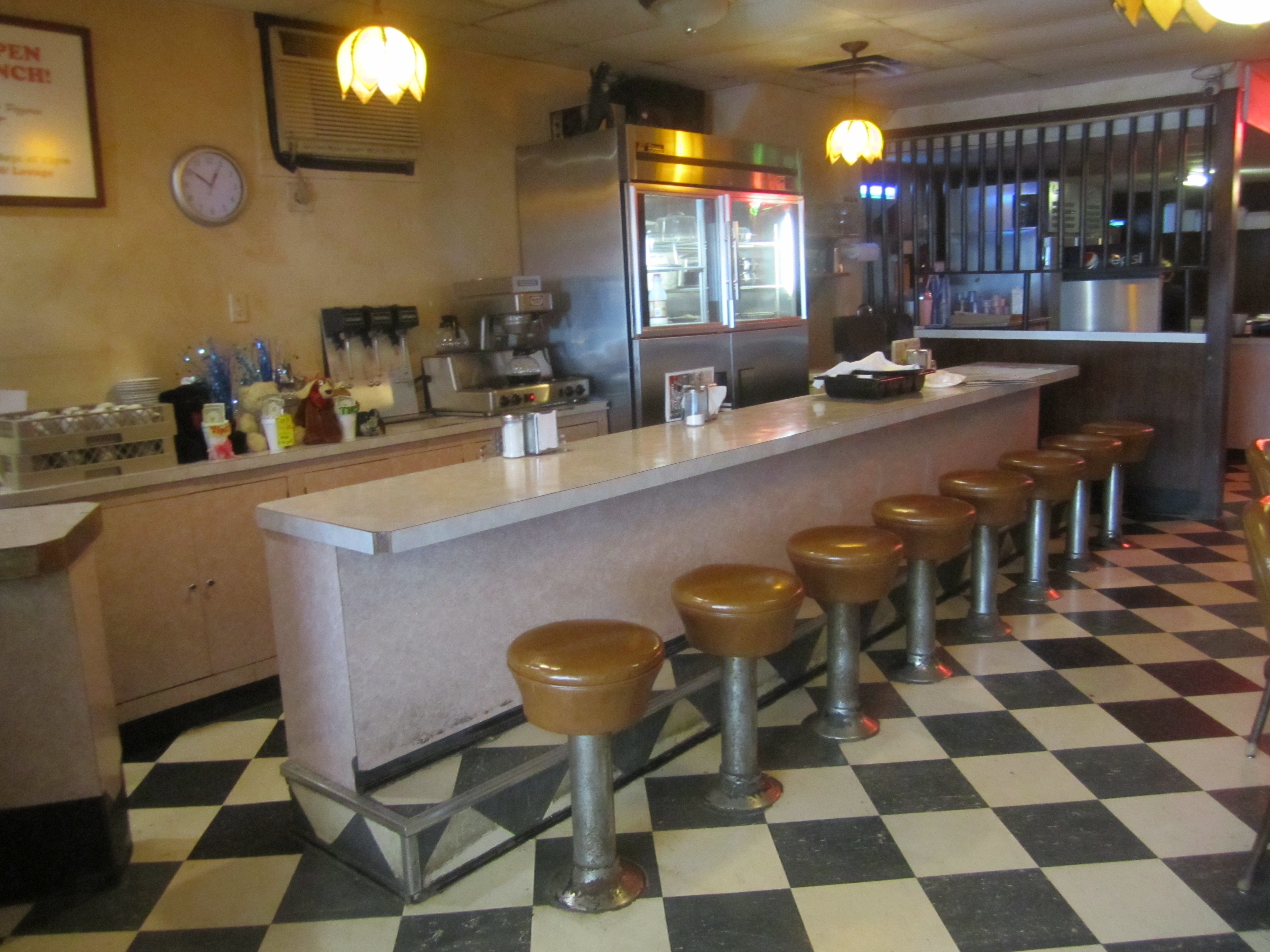 As far as I can tell, this place has never been reviewed by any of Chicago’s major print publications. It has, however, been praised by many people online. Grubhub gives it the top rating of five stars based on almost 3,500 individual reviews. People like it; publications ignore it.

On Yelp this summer a representative citizen reviewer gave the place five stars, saying, “I grew up eating this pizza. After we moved, they wouldn’t deliver to our house. No other place compares! Recently, I moved to Texas and I can’t tell y’all how I’m just counting the days to go back to my hometown Chicago to eat here!!! I miss this place more than any other place on earth.” On LTHForum, a poster declared it “about as classic Chicago as you can get.”

They have a big menu here, including some unabashedly un-health foods like the Foot of Onion Rings, the Breaded Sampler (breaded and fried zucchini, poppers, mozzarella sticks, mushrooms, and, of course, rings) and the veal or chicken Parm—big slabs of meat, breaded and fried. There’s a range of pizza styles on the menu, too, including The Godzilla, with eight toppings.

The best pizza in Chicago has a thin crust with just the right amount of cheese and very, very little grease, the flavors of the simple ingredients coming through cleanly and clearly. The bulk sausage is crumbled evenly over the surface, providing an even distribution of the fennel-and garlic-seasoned meat blobs. The crust around the pie’s periphery is sturdy enough to support the weight of toppings, so you can hold the piece in one hand while eating. Forks and knives are unnecessary for all but the center pieces, which are always less crisp. Textural variation keeps each bite interesting.

Steve “Hungry Hound” Dolinsky published “Pizza City, USA: 101 Reasons Why Chicago Is America’s Greatest Pizza Town,” in mid-September, and it will likely be the definitive word on Chicago pizza for years to come. In a recent interview, Dolinsky said that, for tavern-style pizza, he favors the eminently worthy South Side Vito and Nick’s. My favorite pizza place does not get a mention. 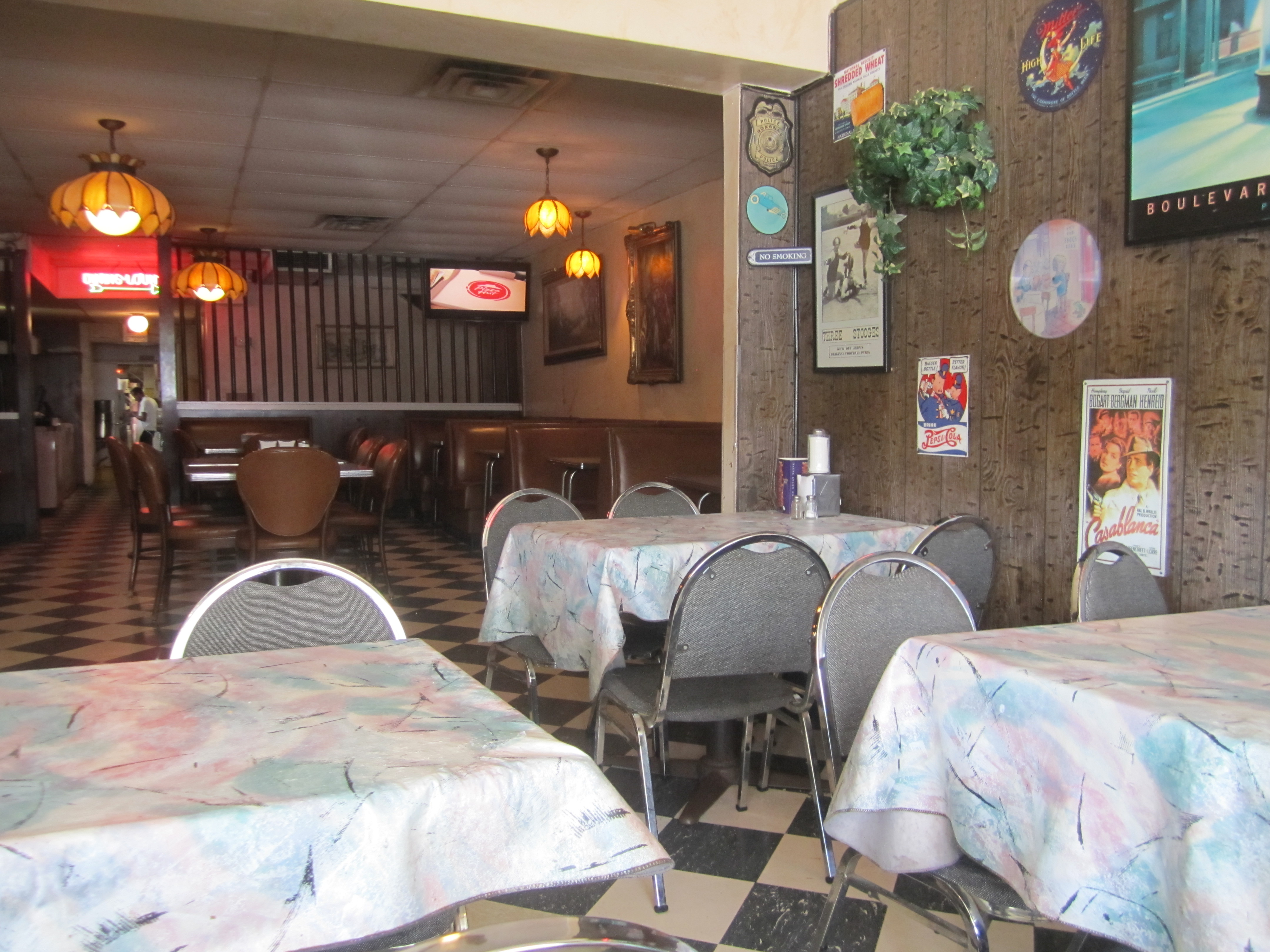 Older by several years than Marie’s Rip Tide Lounge, this pizza place was founded in 1957, and they say on the sign out front they’ve been delivering pizza since pretty much day one. Dining in, however, is a trip: paneled walls, with reproductions of old masters’ paintings side-by-side with Three Stooges’ posters and the obligatory “Boulevard of Broken Dreams” picture, with Elvis serving Humphrey Bogart, Marilyn Monroe and James Dean. It’s a big place with several dining rooms, and on a recent Sunday afternoon, about one-sixth of the seats were filled with the butts of what you can bet were locals.

As at Marie’s, the street signage of my favorite pizza place is the antithesis of glitz: just the name and the familiar picture of the jolly mustachioed man in a chef’s hat.

With the same kind of black-and-white tile floor, low-light anti-ambience and faded glory as Marie’s, this place is a survivor and a look back at how Chicagoans were eating in the years before anyone in town had heard of the Michelin Guide, and the word gourmet referred to things like the thirty-one flavors at Baskin-Robbins.

If you make it to the best pizza place with out-of-towners in tow, give them a crash course in two of the three Chicago classics: pizza, and, right across the street, stop at Redhot Ranch and get the minimalist Depression Dog (onion, relish, sport peppers, but no fresh tomato, cucumber or fancy-pants accoutrements), served since 1952. 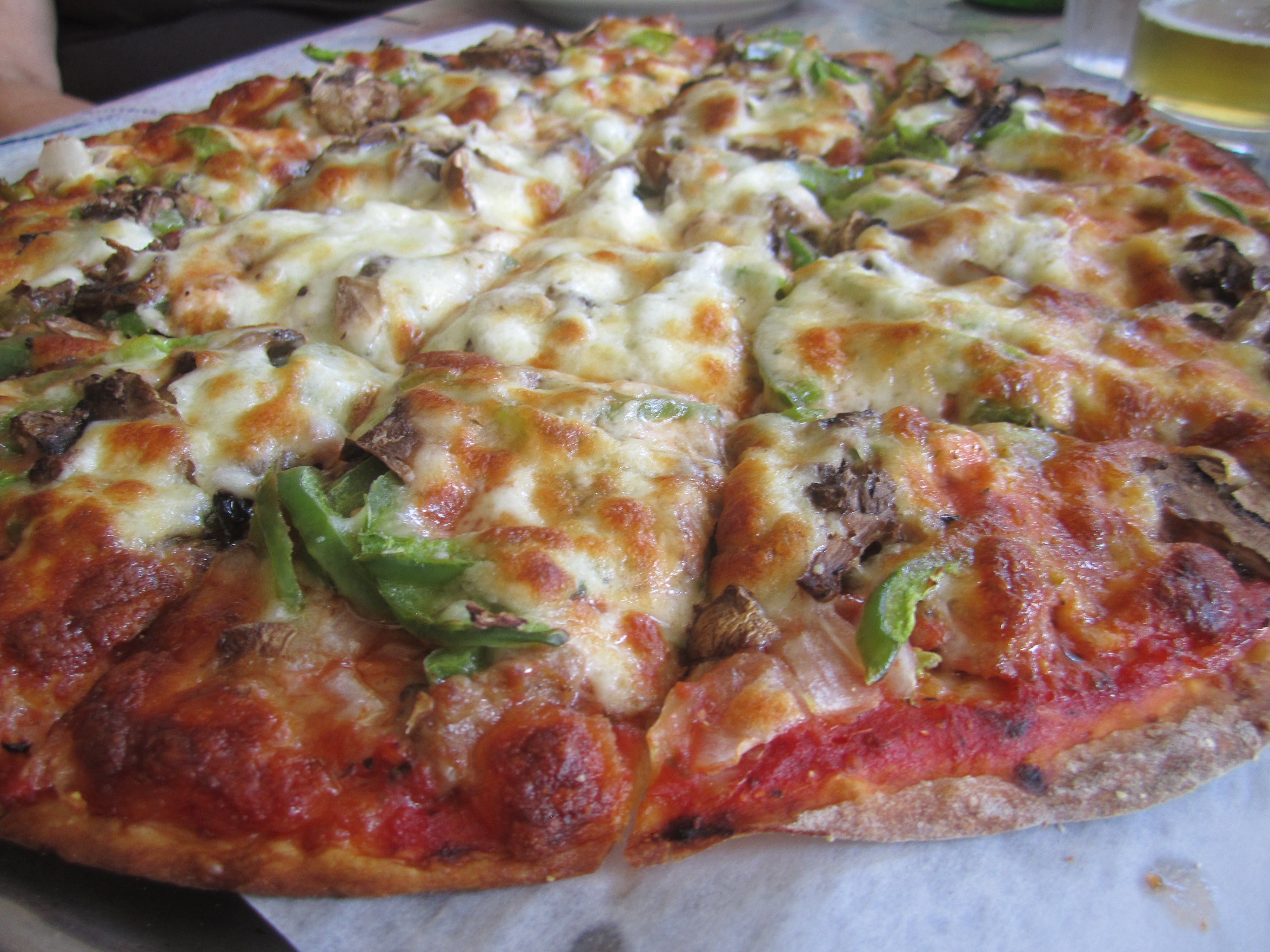 Chicagoans argue endlessly about which pizza, or hot dog or Italian beef is the best, and it’s good to passionately hold beliefs. For pizza, I’m going with John’s Pizzeria Ristorante and Lounge, 2104 North Western. It’s the best pizza around. Sez who? Sez me.