Traditional local markets reflect the culture of a place in ways supermarkets cannot. Supermarket chains leverage the predictable familiarity of branded products. Kroger in the United States, Tops Market in Thailand, Tesco in Europe, all are built on a principle of sameness in products, layout and overall vibe. With the advent of services like Amazon’s Prime Now, the market experience is further dislocated from a sense of regional culture.

Visiting a local market is the best way to get a taste of place. Wherever I go in the world, there’s nowhere I’d rather head than the local market.

Visiting Chicago’s Green City Market, or the smaller local farmers’ markets, brings you as close as possible to traditional Midwestern foods and people.

Farmers who represent at GCM and smaller farmers’ markets are bringing back heritage varieties of produce and animals that never made it into the grocery-store supply chain.

Of the 1,000 varieties of heritage apples out there, very few will be found in your local grocery store. Walt Skibbe, who sells at many local farmers’ markets, introduced us to heritage apples unseen in supermarkets. Skibbe’s apple varieties, such as Northern Spy, are sometimes misshapen, mottled, or otherwise not uniform enough to make it to a grocery-store shelf. His apples are eye-opening in their diversity. “I’m mainly apples,” Skibbe says, although he also sells asparagus, peaches and other produce.

In the United States, grocery stores limit their selections based on what sells and who pays the slotting fee to secure prime space on the shelves, which eliminates produce from many smaller farmers. Grocery stores, of necessity, focus on the same mass-produced goods, with few unique-to-place items. 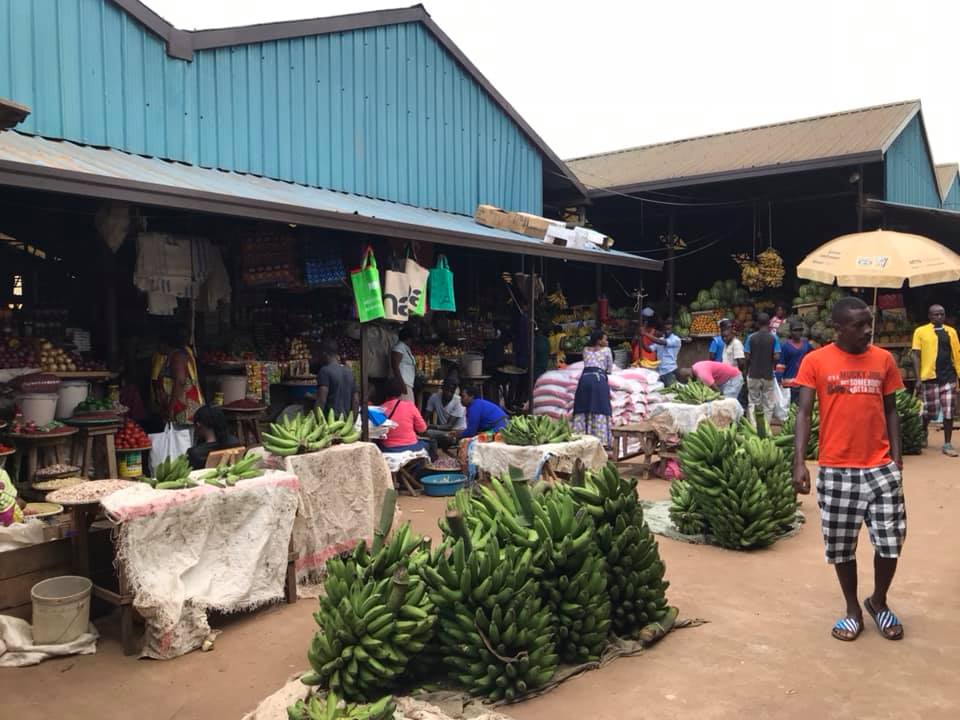 Standing in the center of the Kimironko market in Rwanda, I like what I see and what I don’t see.

There are hundreds of small businesspeople, selling fabrics, fish and fruit, shopping, haggling, testing the merchandise, feeling and smelling, sometimes buying, more often not. There’s lots of talking and hubbub. The market is wonderfully alive.

What I don’t see are Mzungu, people of European descent, people like me. I didn’t come to Kimironko to go elbow-to-elbow with other foreigners vying for deals. Better, I think, to see what Rwandans shop for and how they shop for it.

There is a community sense at places like Green City Market, but our Chicago market is very different from the one in Rwanda. The Kimironko market is open every day of the week. It’s an everyday market. Another difference is that items for sale are not portioned into disposable containers; instead, you ask for the amount you need. At this market, few signs above the stands indicate who’s selling what; everyone knows who’s selling what, so you don’t need to announce yourself. As you might expect, there are no indicators of how far a food item traveled from the farm to the market, but you can be sure that the distance was not great.

Finally, unlike at the Green City Market, at this market in Rwanda, a single stand does not offer a range of produce. This is a nation of small businesspeople operating in simpler economies, so they specialize in one or two products, never the dozens you’d expect to find at a Midwestern farmer’s stand.

All over Europe, at Christmas time, there are holiday markets, usually set up in front of cathedrals, a heavily trafficked and traditionally important part of town. In Chicago, no holy place gets quite as much traffic as the Daley Center, with lawyers, defendants and others trooping in and out all day.

At Chicago’s Christkindlmarket, you can eat Germanic food items you’d have a hard time finding anywhere else in Chicago. The Leberkäse is not, despite the name, made of liver anymore, but rather emulsified beef and pork, baked in a pan. What you get in your sandwich is a big slab of lightly spiced bologna, a hotdog-burger, if you will. It’s the common people’s food, and we look forward to it every year.

Currywurst Berlin-style is another item you have to search out in Chicago, though Paulina Market does sell a sausage billed as currywurst, but it’s not the traditional sausage snack. In Berlin, and at Chicago’s Christkindlmarket, currywurst is a pork sausage, cut into coins, covered in ketchup, seasoned with curry. The story is that this street food was invented in postwar Berlin when an enterprising charwoman traded English soldiers schnapps for their curry powder. After experimentation in her home kitchen, she sold the resulting currywurst on the streets of war-ravaged Berlin. Today, there’s a Currywurst Museum around the corner from Berlin’s old Checkpoint Charlie, an enduring monument to Germany’s most famous street food.

Chicago, of course, was shaped by waves of German immigrants. As of the 2000 census, Germans make up the largest European ethnic group in Chicago and those of German ancestry are the largest ethnic group in eighty percent of Chicago’s suburbs. That would explains why we have a German-inspired holiday festival in Chicago rather than a French- or Belgian-inspired holiday festival.

Waking up in Bangkok one morning in 2015, I looked out our window to see that, overnight, a market had sprung up right outside. What luck!

We go downstairs to shop for breakfast and find foods we’ve never seen before. There are muffins made from a type of squash and mounds of crisp Rose apples, a cross between an apple and a pear, largely unknown in the states. There are also sea grapes, small clusters of BB-sized fruit, highly perishable and virtually unknown outside their growing area.  We nibble a few: each pops like fish roe, releasing a gummy liquid tasting of briny seaweed: delicious.

Every day in Thailand, we’d visit local markets, and every single day, we’d see fruits and vegetables, even fish, we’d never seen before. It’s breathtaking, the range of creation.

Pulling into Sihanoukville, Cambodia, we went directly to the local market. Housed in a mammoth Quonset hut, with open wooden sides and an aluminum roof, the market had the distinctive smell of raw meat warming in sunlight. Many people were barefoot. Two British women came by to complain about what they called “this shit market,” a comment I found highly offensive.

Granted, this market wasn’t as tidy and hygienic as it might have been, but who cares? This is Cambodia, where Pol Pot led the Khmer Rouge to the killing fields to murder as many as three-million fellow Cambodians. They lived through a horrendous national nightmare, so we can perhaps forgive them for not sweeping the aisles regularly.

Me, I didn’t want to leave this place where people haggled vigorously with neighbors and where kids stood with their parents tending shop, learning to be grownups. It was good to see.

Though hungry, we take precautions when ordering food in a market. It’s best to get it hot, right off the grill. The cooked fish was fantastic, likely caught that morning in the South China Sea, nothing fancy, no seasoning, just the clean taste of fresh fish pulled off the charcoal and served.

The one place in Chicago where you get the sense of traditional market—like those in Europe, Asia and Africa—is at the Maxwell Street Market, relocated twice from the street of the same name and now lodged on Desplaines Street.

Maxwell Street Market was once Jewish, then mostly African American, now it’s Mexican, and maybe soon, Middle Eastern. The market is a constant reflection of the changing demographic of the city: corned beef, the blues and now lots of Mexican food. You can be sure you’re getting as close as possible to the constantly changing roots of this place.

Alas, the Maxwell Street Market is shrinking. It’s not as abundant with vendors this summer as last. In a few years, it’s possible the market will be a memory. When that happens, we’ll all lose some of the connection to place that’s still so powerfully present in local markets in other parts of the world.