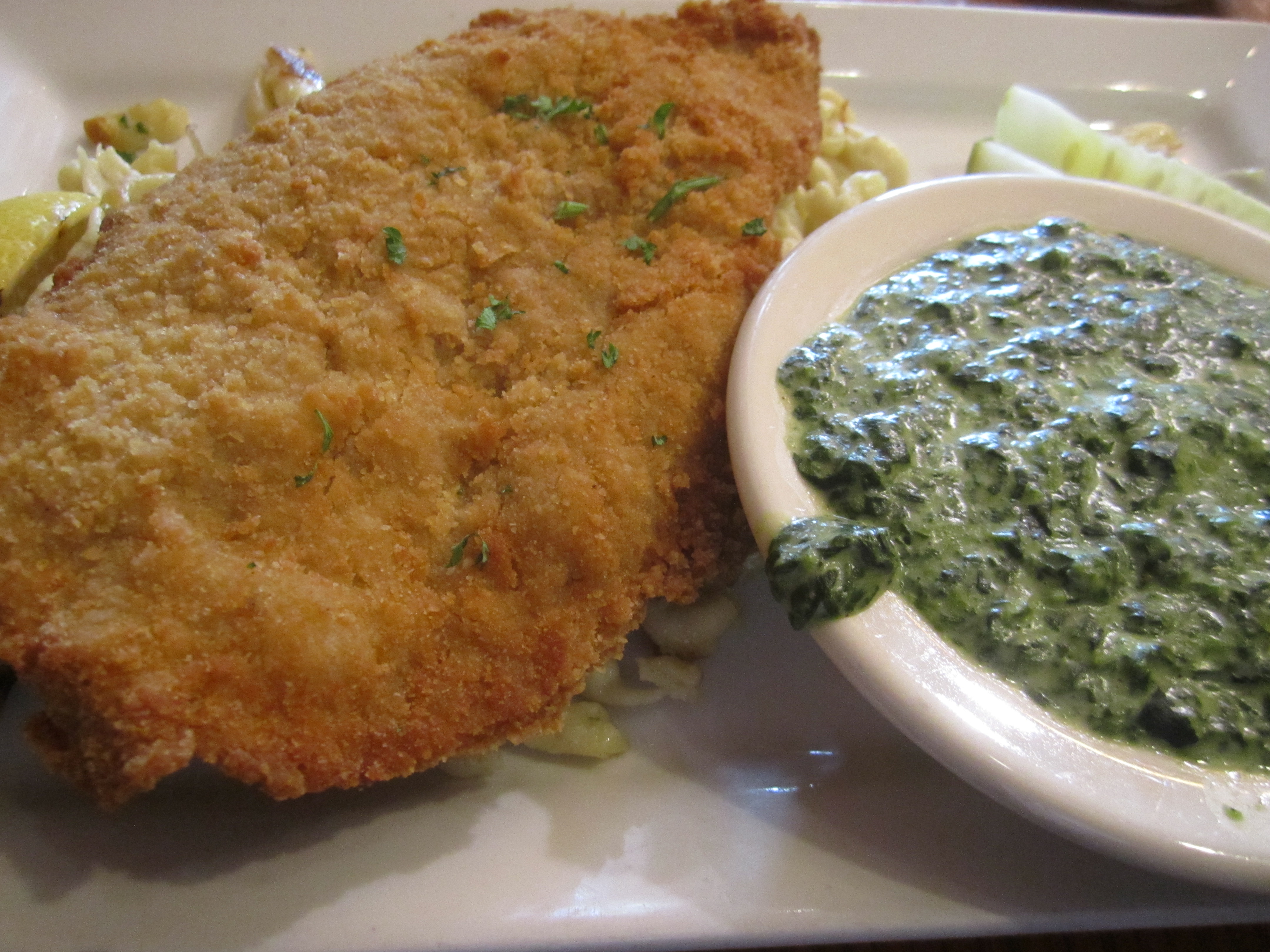 My wienerschnitzel is everything I could have hoped it would be, which is to say, it’s pretty much the same as I had when my friends and I would ditch a day at York High School in Elmhurst to go to the Art Institute and have lunch here, where you want to eat at Christmastime.

The restaurant where you want to eat at Christmas time is German, and there’s a case to be made for Christmas, as we know it, being invented in Germany. Kris Kringle (drawn from the Christkindl), the Christmas feast, gingerbread, all can be traced to German origins.

“The Nutcracker,” the iconic Christmas family theater event, is based on E.T.A. Hoffmann’s “The Nutcracker and the Mouse King”—later a ballet by Tchaikovsky—and is a portrait of a highly secularized German Christmas and the family rituals that sustained it.

Joe Perry, in his 2010 “Christmas in Germany: A Cultural History,” says that “Writing about the ways Germans remade Christmas in the last 200 years is… an attempt to write about the ways Germany continually rethought the connections between themselves and their society. The history of the holiday itself, with its rich symbols and traditions, is central to this effort; Christmas was and is the western world’s foremost celebration, and the German version is quintessential.”

Some of us may remember singing “O Tannenbaum” during our school days, though it’s unlikely that any of us referred to our Christmas tree as a tannenbaum. Later this song became “Oh Christmas Tree,” and the holiday itself has integrated into the Anglo-American system of marketing holidays as sales opportunities.

The appeal of Christmas stretches beyond the western world, and has far exceeded the spiritual connotations of the day. In the northern Thai province of Phrae, we visited a grammar school on Christmas day and were delighted to see dozens of young Thai children dressed as Santa Claus. Thais are largely Buddhist, and it’s unlikely any of the children at this Thai celebration were thinking of the birth of Christ as they danced and sang songs like George Michael’s “Last Christmas.” What these children, and their parents, enjoy about Christmas is likely the fun of it. Aside from depression and the urban sentiment about suicides rising at Yuletide, this is a happy holiday: it’s about being with family, feeling good, dressing up, getting gifts and eating well.

Deck the Halls with Mounds of Meat

Traditionally, Christmas is celebrated with meat, as are many festive days, including Michelmas, the medieval celebration of St. Michael that climaxed with a roast goose. England, which did its part to amplify the Anglo-Saxon tradition of Christmas, is associated with a Christmas goose, but a traditional Christmas celebration in an English household is more likely to have centered around a turkey. It was not a goose, but a turkey, that Ebenezer Scrooge beckoned an urchin to fetch for him in Dickens’ “A Christmas Carol.”

A goose at the center of the Christmas table is more likely be found in Germany.

In Italian-American households, the celebrated protein is not meat but fish. The Feast of the Seven Fishes (or The Eve), which is the light dinner before heavy Christmas fare. Some speculate it was invented by Italian-American restaurants to be a dinner that avoids the luxury of meat. Maybe. As an Italian-American who is very of fish, I can say that at the Christmas table, we’d rather eat meat, and that’s what you’ll get at the restaurant where you want to eat at Christmastime. 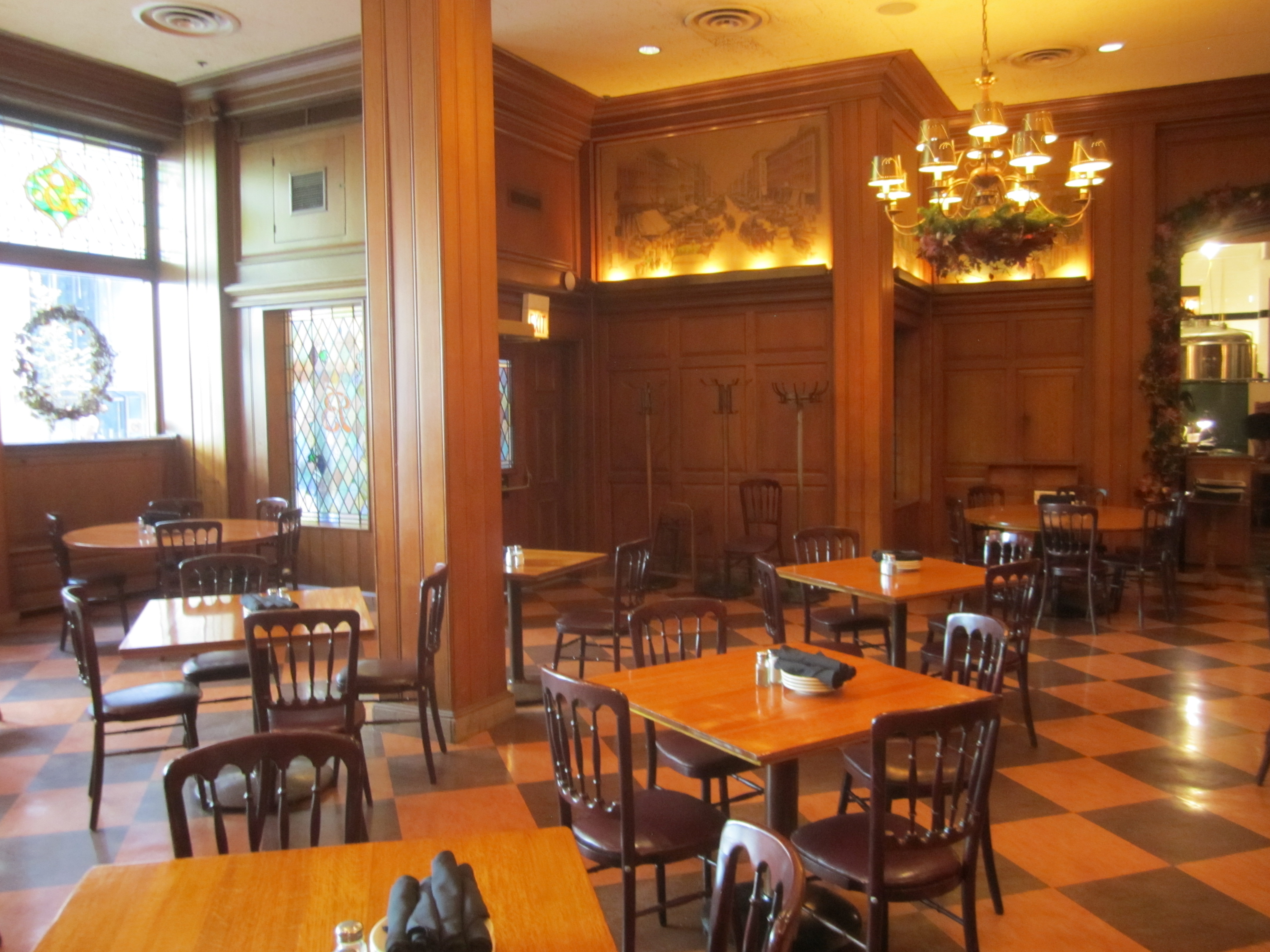 Dining room at the restaurant where you want to eat at Christmastime/Photo: David Hammond

Sitting in the wood-lined dining room at Christmastime, families and troops of shoppers have come to fuel up with fortifying German food. Cold weather is the right time for German cuisine: big carnivore-pleasing slabs of victuals and steaming heaps of potatoes fill the stomach and strengthen the spirit before we trudge back to the windy, wintery streets of the Loop.

Christmastime is draped in tradition, and there are few Chicago restaurants that feel more traditional than this place, where you want to eat at Christmastime.

The murals on the walls of the dining room depict the “White City” of the Columbian Exposition, where the original owner began selling his beer, brewed in Indiana, a few years before opening the doors to his own Chicago bar in 1898. That’s right, this place is 120 years old this year, and eating dinner out during the Christmas season feels best at an older place.

There’s energy in the air, prompted by the season and enhanced by the rooms’ hard surfaces that bounce sound, the hustle-bustle of a large space, and the efficiency of the kitchen.

“The prices have gone up,” an older woman at an adjoining table whispers to a friend as they review the menu, and they no doubt have. Still, for downtown Chicago, the prices are not high, and a family of five could eat here for under $200. This is not fancy food, just substantial and largely Germanic chow, with a few flashes of genuine deliciousness. Though the Weinerschnitzel was standard and no standout, the creamed spinach was spectacular: hints of nutmeg, a good balance of green leaf and cream, a side dish that demands attention and inspires a return visit.

Despite the changes, good and bad, this place has remained remarkably consistent through the years: simple wooden tables and chairs, tall ceilings and the murals, the stained-glass windows, all have been there for decades. You feel Chicago’s earlier days and the spirit of Christmas past. You feel the weight of tradition when you walk through the doors. Much of the power of Christmas comes from tradition, and that’s why The Berghoff is where you want to eat at Christmas time.