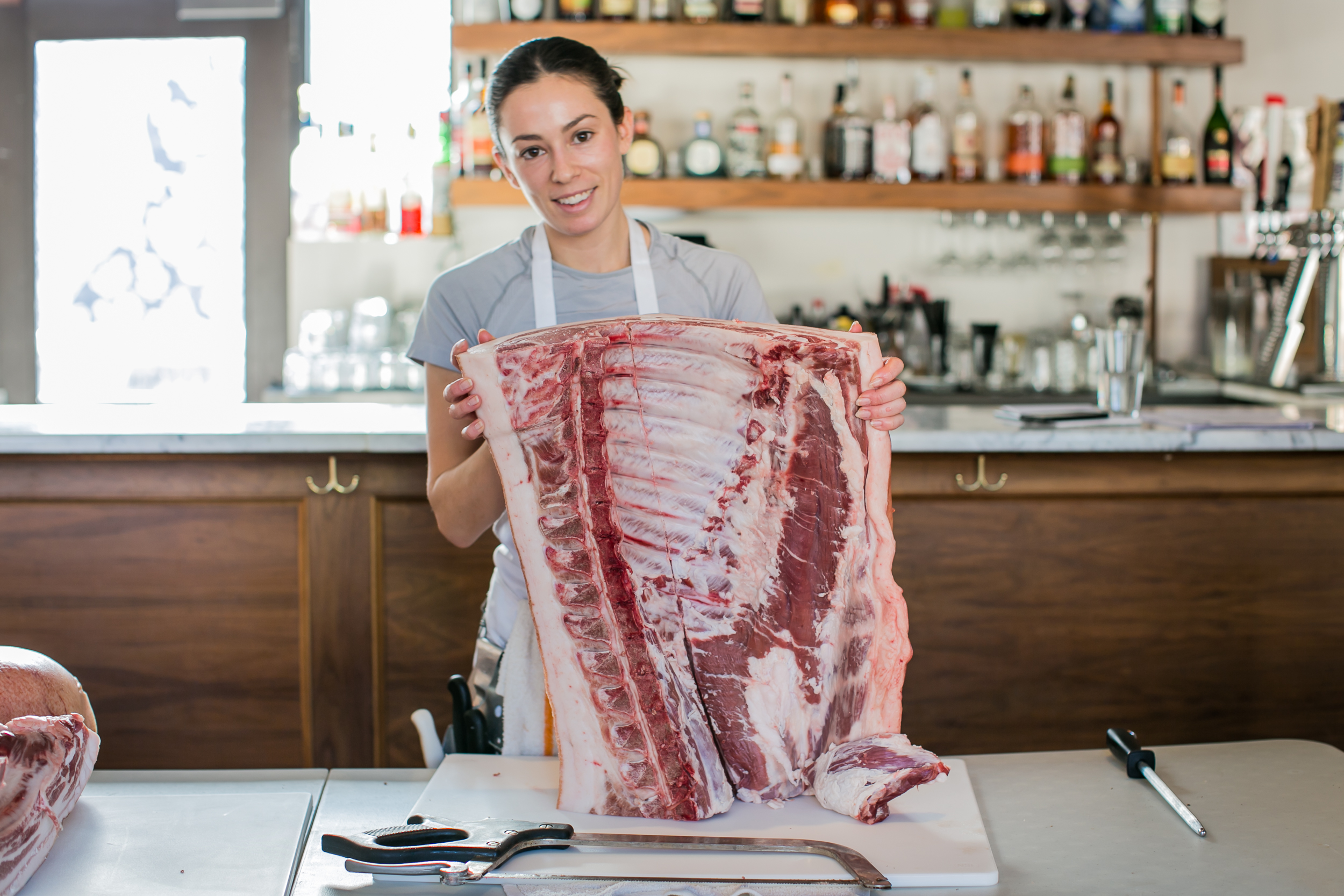 Meet McCullough Kelly-Willis. Rather, meat McCullough Kelly-Willis, the founder of Chicago Meat Collective. The CMC is our local chapter of a nascent national movement of butchers, foodies and flesh-focused individuals championing local, sustainable meat through education and hands-on experience. That’s right, hands-on, as in, your hands on the shimmering carcass fresh from the farm, holding the flesh firmly and taking a knife to the heart of the matter. Forget Whole Foods; this is whole hog.

In January, McCullough led a small class through a whole-hog breakdown, demonstrating with one side and separating the pupils into two groups for practice on the other two. They mixed French, Italian and American styles of butchery, taking the beast down to its edible elements in a matter of hours. It was a lot of meat, with some students going home with more than forty pounds. Considering the knowledge gained and the take-home protein, the ticket price of $65 could only be called a rock-bottom deal, as long as you have room in your freezer, or friends and family to share the wealth. And that’s part of the challenge for the CMC: convincing people it’s worth it to learn to cut meat on their own after ordering the right amount of animal for a class that is, by necessity, intimate.

By her own admission, McCullough’s clientele is self-selected. There are no vegans seeking schooling on ethical meat consumption, nor casual meat-eaters with a lot of free time on their hands. These are people who appreciate the kind of flavor, texture and satisfaction only meat can offer, but feel conflicted about the legitimate concerns of sustainability around meat-eating, or alienated by the quality of industrial meat processing. On both issues, the CMC educates consumers on the sustainable practices of their local source farms and the ways that cutting meat with precision ensures less waste and a greater yield. And if one can do that at home, you get a closer relationship between consumer and product. 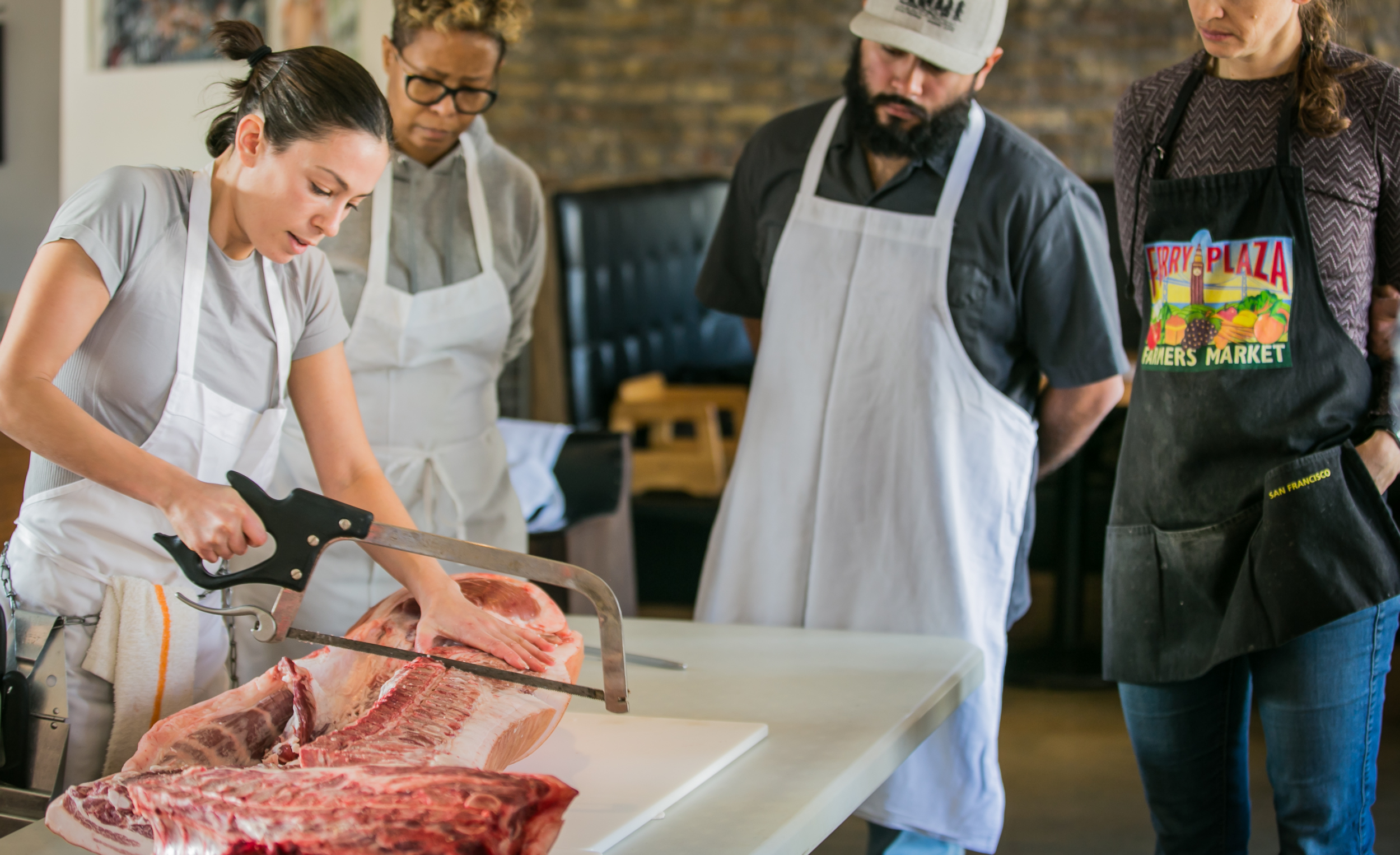 “Meat should be expensive,” McCullough says bluntly. “It’s a self-defeating business model, and there is some resistance to it.” But she makes a compelling argument: meat costs should be high to ensure higher quality and lessen consumption. Sustainable meat eating is about eating better meat less often. “Animals are part of the agricultural ecosystem. They cannot be eliminated from it,” McCullough continues. She nods to the trend toward regenerative agriculture, which seeks to enrich the biodiversity in farmlands to undo the harm done by monocropping and industrial agriculture. Meat, and the animals it comes from, are crucial to restoring that natural balance.

McCullough came to the art of butchery out of sheer curiosity. In 2013, she enrolled in a course at the Portland Meat Collective, the mothership of the meat movement spearheaded by Camas Davis. After an enlightening sojourn in the southwest of France, where she learned the ways of whole-animal butchery and localized agriculture, Davis returned to Portland to found the Portland Meat Collective, and later, the Good Meat Project nonprofit, with a mission to develop ethical meat consumption through education. After her studies with Davis in Portland, McCullough spent the better part of four years cutting her chops at Chicago’s The Butcher & Larder. Last year, she started her own collective, based on Davis’ model and support from the GMP.

Chicagoans will be proud to know that the Chicago Meat Collective is no clone of Portland’s. McCullough is keen to take advantage of the city’s thriving gastronomic scene and its adventurous pop-up spirit. Several classes have been held at the Chop Shop, where she instructs students in butchery in its certified professional kitchen. Cellar Door Provisions has hosted the CMC twice, once for a charcuterie and cheese pairing class and again with all that plus wine. Dairy specialist Erika Kubick, known on Twitter as @cheesesexdeath, taught on cheese and Selection Massale’s Nadim Audi poured classy Jura wines to match the region’s famous Comté and Mont d’Or. All the while, they broke down a pig’s head into fromage de tête.

The CMC has also made inroads to Gary, Indiana, where McCullough teaches a butchery class for United Steelworkers in an education enrichment program. She tells an amusing anecdote about a coordinator worrying that she would bring a live hog to the classroom. “It’s a common misconception that butchery always includes slaughtering, which it does not,” she says. It is precisely these misconceptions that the Chicago Meat Collective seeks to remedy through its mission of educational outreach. For meat-eaters and abstainers alike, this is a worthy cause. The more we understand our meat and appreciate where it comes from, the more likely we are to consume it responsibly.

Information and class schedules are at chicagomeatcollective.com.