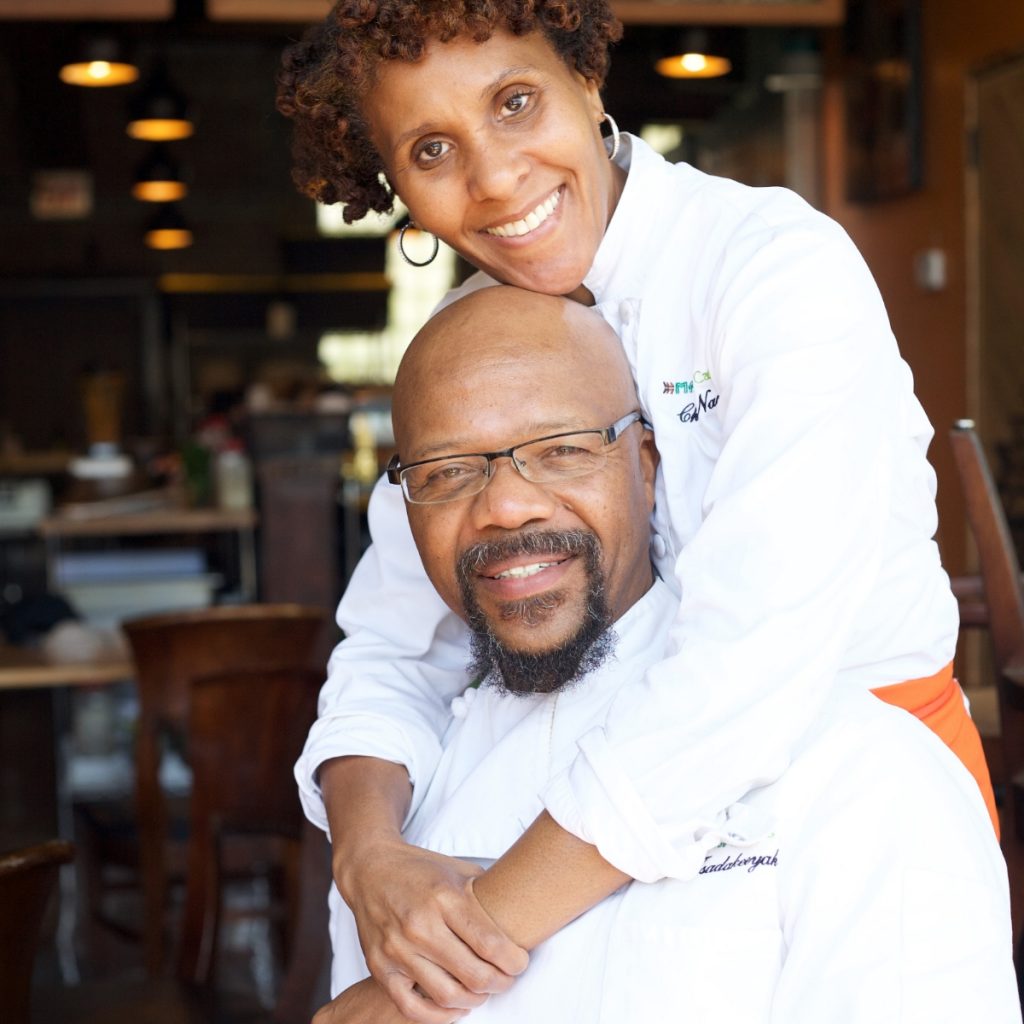 On the corner of a quiet block in Chicago’s South Shore neighborhood lies a quaint, bustling eatery full of light and life. Even on a weekday at 3pm, long after the lunchtime rush should have died down, smiling customers crowd into the 950-square-foot space, chatting happily with the staff while ordering takeout or sitting down to enjoy the “soulful vegan cuisine” provided by Majani.

For almost two years, Majani’s unique dishes have delighted customers by proving just how flavorful vegan food can be. It has become of a vegan hotspot in Chicago, as well as one beloved by non-vegans who simply wany to enjoy a healthy meal. 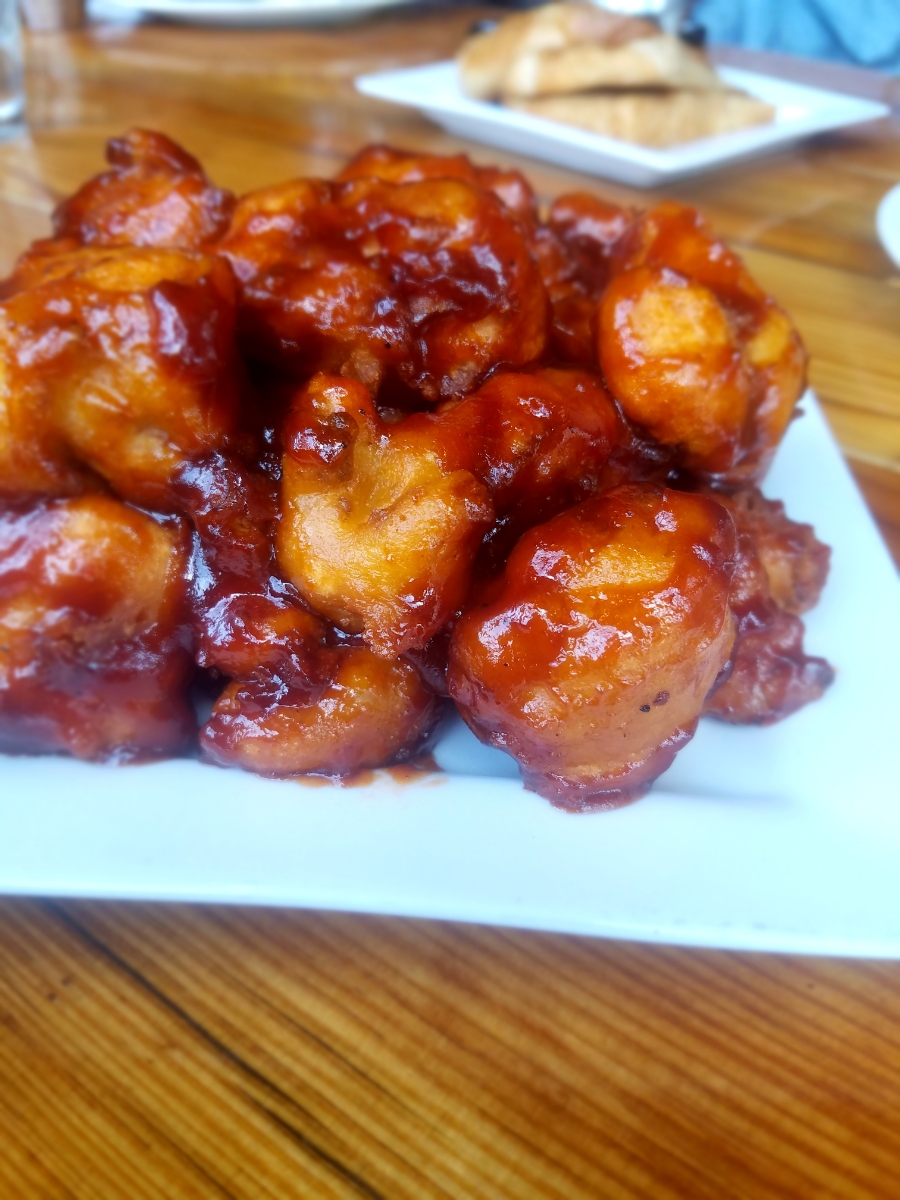 Diners can feast on menu items like jerk tofu smothered in creamy chipotle sauce, a black eyed-pea burger with BBQ sauce and garlic, sweet potato rolls with tahini sour cream, cheesy grits with fresh tomato sauce, a lentil mushroom burger mixed with secret spices, and lightly fried BBQ cauliflower that, if eaten with your eyes closed, could trick you into believing you’re eating an extraordinarily delicious version of chicken nuggets.

Located at 72nd and Exchange, Majani opened in May 2017. The restaurant was dreamed up by married head chefs and owners Nasya and Tsadakeeyah Emmanuel, who have been South Shore residents for fifteen and twenty-five years respectively. The couple had been running Majani as a catering business and meal delivery service. Eventually, their frustration with their neighborhood’s lack of healthy eating options reached a tipping point.

“We wanted a place where we could just sit down and enjoy a good meal in our neighborhood,” says Tsadakeeyah.

The journey to those bright and crowded weekday afternoons wasn’t easy. “We stepped out of our comfort zone to start the restaurant,” Tsadakeeyah says, citing both the physical and financial challenges the couple endured to get Majani up and running.

When they first found the space that would become Majani, they projected it would need only light remodeling work at an estimated cost of $10,000-$20,000. But the more they explored the more work they realized needed to be done.

The remodel cost upwards of $100,000, even though they did a large portion of the work themselves.

As such, Majani is truly a labor of love. “Having a restaurant, you’ve built from the ground up, it’s your baby,” says Nasya.

It’s clear the couple’s hearts and souls are built into every nook and cranny of the place. It feels comfortable, relaxing, homey. A curved wall made entirely of windows encircles half the space, allowing the sun to stream in and cast a warm glow over the diners. Beside the front counter, a wooden mantle emerges from an exposed brick wall, mimicking the look of a hearth. 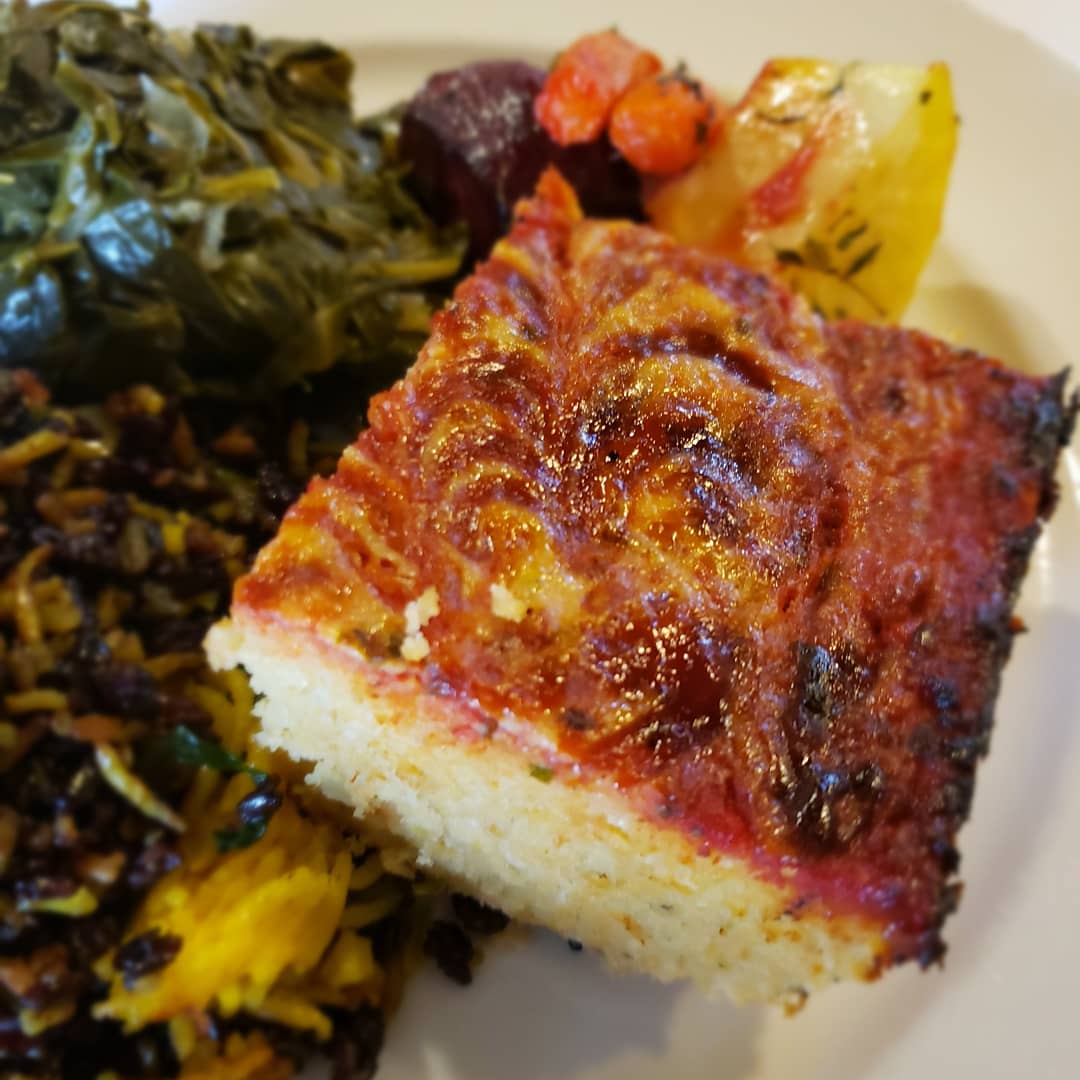 Whimsical wood-framed chalkboards dangle on cords above the counter. One reads, “Proudly Serving the South Shore Neighborhood.” Another provides a list of urban farms diners support when they eat at the restaurant, including Eden Place, Windy City Greens and Sweet Pea Farm. Another chalkboard declares, “Welcome to Majani.”

Majani means green in Swahili. The name was chosen by Nasya. For the Emmanuels, it symbolizes far more than green cuisine and healthy eating. It also represents their devotion to supporting local farmers, to using reclaimed materials as much as possible, and to hiring local talent.

Hiring South Shore residents, especially youth, is woven into the fabric of the Majani mission. The community was hit hard during the Great Recession. Many core businesses closed, household incomes fell and foreclosures skyrocketed. According to the Chicago Tribune, South Shore has experienced 3,950 foreclosures in the decade following the recession.

Many residents had to seek employment outside of the neighborhood. When looking for employees, Tsadakeeyah couldn’t believe the number of South Shore residents he interviewed who were driving two hours each way to work a job that paid minimum wage. In addition to Nasya and Tsadakeeyah, Majani has sixteen employees. Almost everyone walks to work.

“If we’re going to make change,” says Tsadakeeyah, “We have to believe in our neighborhood enough to know there’s enough resources here to support the business and there’s enough talent here to work in our restaurant.”

Nasya and Tsadakeeyah hope other business owners will look to Majani and see that South Shore remains a vibrant community worth investing in. “To see us continue to grow in less than two years,” says Nasya, “It’s a testimony that this community can work for other businesses.”

South Shore has gained a reputation for violence more than anything else these days, but the Emmanuels know the neighborhood has far more to offer. For one, it lies directly on Lake Michigan, and possesses stunning public beaches. The neighborhood, says Tsadakeeyah, “is one of the few places in the country where there’s a community of African Americans that control prime real estate, right off Lake Michigan. One of the largest freshwater systems in the world is in our backyard.”

South Shore, the former home of such legends as Michelle Obama, Jabari Parker, Jesse Jackson Jr. and Nobel Prize winner James Watson, is also the home of the South Shore Cultural Center, an architectural marvel that includes a beach, gardens, facilities for art classes, event venues, a golf course and a nature center.

Despite these assets, the Emmanuels dream of a day when South Shore residents will have the opportunity to choose from a larger variety of restaurants.

“If we can create a restaurant row here in South Shore,” says Tsadakeeyah, “we can create hundreds of entry-level jobs that will boost the economy, and if we can create an area in the city that reflects Black cuisine broadly… That’s what we’d love to see happen here. Not only would it uplift South Shore culturally, but economically, it would put us on the map for more than just violence. So that’s part of our longterm vision, to inspire other businesses to come and uplift South Shore.”

When Majani opened, the Emmanuels say, investors and community members alike were not convinced a vegan restaurant could survive in the neighborhood. Some wary investors even pulled out at the last minute—although a few have returned after observing Majani’s success.

The Emmanuels never let skeptics slow them down. They were determined to drown out the haters. “When it’s on your heart and your mind to do it, you have to do it,” says Tsadakeeyah. “You cannot be dissuaded by the naysayers. I think that’s one thing we both were tenacious about, that we’re going to do this no matter what. I don’t care if it breaks us. We were committed to doing it and nothing was going to stop us.” 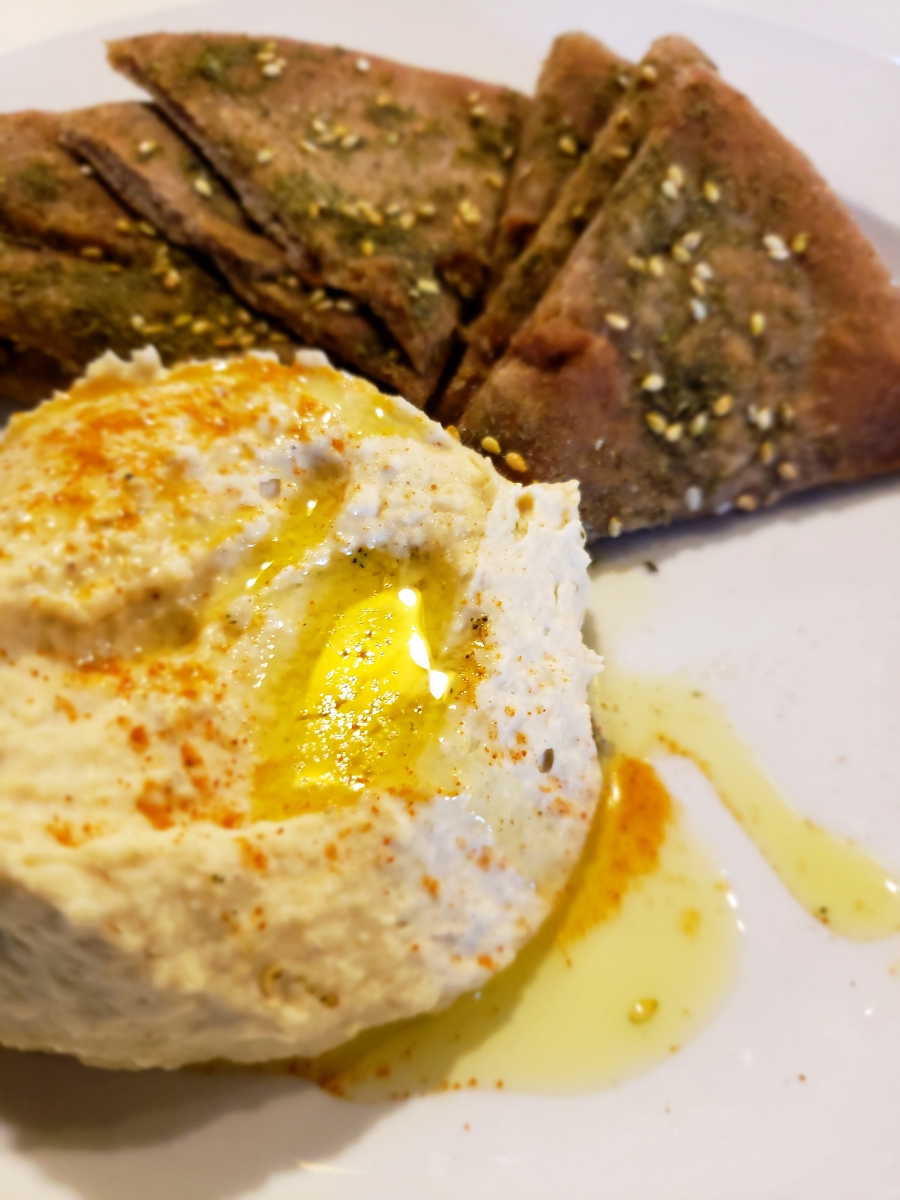 For the first six months after opening, Nasya and Tsadakeeyah would arrive every morning at 5am and stay until midnight. It is only now, after working hard to build a reliable and well-trained staff, that they are able to leave at a reasonable hour.

“I’m still proud of myself to this day for just sticking to what we set out to do,” says Nasya, “because there were many times I wanted to give up and get me a nine-to-five.”

Still, the grind isn’t over yet. The Emmanuels predict it’ll be at least five years of being open before they can fully relax and embrace some free time. They laugh at the thought of doing anything beyond restaurant-related work, but they do their best to take a break every once in a while and see a show or visit friends.

The continued success they are having in South Shore keeps them going. “Seeing the reaction we’ve gotten from the community I think is what is most gratifying for me,” says Tsadakeeyah. “Just the fact people said, ‘You can’t be successful here in South Shore.’ That was false. We have thrived here in South Shore and folks here love our restaurant and really embrace us.”

Neither Tsadakeeyah nor Nasya ever intended to become chefs. For Tsadakeeyah, it began when he took a job as a prep cook in the mid-eighties and the chef told him he should consider cooking as a career. He shook his head, barely giving it any thought, but eventually, he came to agree. He was already a vegan, but at the time there were no vegan cooking schools. So, he began to educate himself. He read as many cookbooks as he could get his hands on before finally landing a job at Soul Vegetarian Restaurant in Atlanta.

When he moved to Chicago, he started a catering company that eventually became a restaurant, Vegetarian Express Gourmet. Tsadakeeyah owned it for three years and says it gave him a wealth of knowledge when it came time to launch Majani.

Nasya is Majani’s pastry chef. Her creations, delectable-looking cakes, cookies and cupcakes line the counter at the front of the space. She discovered her love for cooking and baking while assisting Tsadakeeyah with his catering and meal programs. She loved it so much, in fact, that she quit her day job and went to pastry school.

Majani currently serves between one hundred and 120 customers each day. There are many regulars, but the restaurant also welcomes new customers every day. Word of mouth, they say, is their biggest strength, but social media has also been kind to them.

In fact, the Majani Facebook page has more than 5,500 followers. Reviews on the page rave about the taste of the food, the community atmosphere the staff maintains, and the affordability of the dishes.

One five-star review came from someone who hadn’t even tasted the food: “While I did not eat here,” it says, “I still feel the need to leave a five-star review for everything being so sublime here. The staff were friendly, the bathroom was hands-down the nicest, cleanest I’ve ever used in a public place, the aesthetic and atmosphere was cozy and friendly, and they were playing some quality OutKast at a perfect volume.”

“My favorite place in Chicago!” reads another, “The staff is wonderful, the food is an absolute dream, and the place itself has the most chill, cozy atmosphere ever.”

“Cozy” is the perfect word. The Emmanuels wanted to fit in as many customers as possible, so despite the small space, the restaurant seats thirty-four. The tables are close together, but the community atmosphere makes it feel intentional. Not crowded, but full. Not awkward, but warm.

Soon, they’ll squeeze in even more people. Last summer, the Emmanuels received a $160,000 grant for expansion through Chicago’s Neighborhood Opportunity Fund. They are moving their production kitchen to a new place down the block, leaving space in the restaurant for a juice bar with counter seating.

Even beyond the new kitchen, expansion is high on their list of priorities. “Our goal is to go into black neighborhoods,” says Tsadakeeyah. Majani is opening a new location in Pullman. Then comes Englewood. Then the West Side. They hope Majani will be a model that will spread around the country. Eventually, they want to franchise the restaurant and bring their dishes—and more jobs—to as many communities as possible.

As Majani grows, the Emmanuels hope their food will continue changing hearts and minds about what it means to be vegan and eat healthy. Vegan food, Nasya and Tsadakeeyah say, is commonly misunderstood as boring, bland and unappetizing to even look at. But they know what vegan cooking is really about. They know that whether or not someone eats meat, there are vegan dishes that anyone can enjoy.

For many, Majani’s BBQ cauliflower is the ticket. It’s a customer favorite, one of the dishes Majani is best known for. The Emmanuels have seen it convert nonbelievers into lovers of vegan cuisine. A bite of the cauliflower, Tsadakeeyah believes, can gain a staunch meat eater’s trust and convince them to try other dishes.

“Those are things we really relish when people come here,” Tsadakeeyah says. “They have an expectation that it’s going to be ‘rabbit food,’ as they always say. We get the chance to blow them away.”