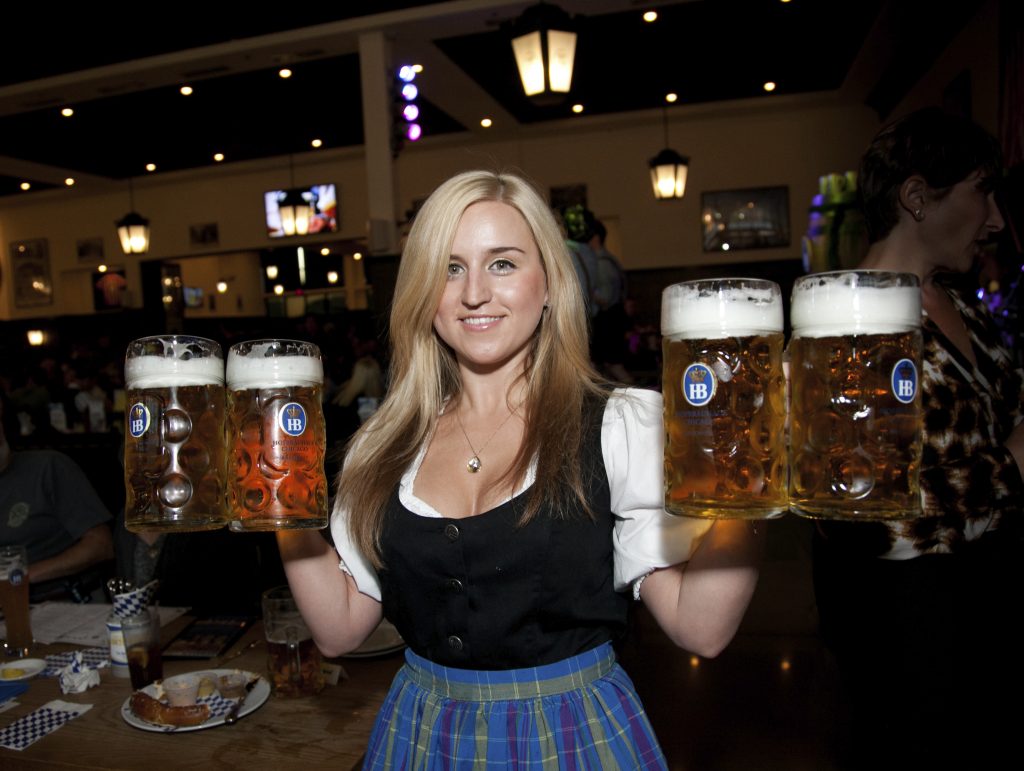 Oktoberfest might be one of those ancient, perhaps “pagan,” harvest festivals—like Gaelic Samhain or Celtic Lughnasa—held at the end of the season to celebrate the gifts and gods of the earth and prepare for the winter ahead. But Oktoberfest is not that old. The first Oktoberfest was held in 1810 in honor of Bavarian Prince Ludwig’s marriage to Princess Therese von Sachsen-Hildburghausen. Oktoberfest is now a monthlong wedding reception, a time to throw back a few beers, sing raucous songs and dance.

Munich’s Hofbräuhaus has been the scene of many an Oktoberfest, although the brewery is much older than the holiday itself.

Munich’s Hofbräuhaus holds a powerful position in German cultural and political history. Young Adolf Hitler painted a watercolor of the place during his “artist” phase. Later, in 1920, an ascendant Hitler stood in the Hofbräuhaus to deliver his address, “Why We Are Anti-Semites.”

I visited Munich’s Hofbräuhaus in the early seventies. I remember that it was chilly outside, and so it seemed like a perfect day for hoisting a few with friends. That evening, I was sitting with some American buddies on a long, well-worn bench at one of the wooden tables at the four-centuries-old—and surprisingly cozy—Hofbräuhaus.

The serving maidens at the Hofbräuhaus, robust and jolly, were able to carry a vast quantity of beer steins in two hands, maybe up to twelve, enough to serve a whole table of drinkers.

As we enjoyed our second beer, we were joined by a group of outgoing locals, guys our age. Before long we’re toasting with our big ceramic steins. At one point, the young man sitting directly in front of me narrows his eyes and asks, “Are you a Jew?”

The correct response to this question, especially when posed in an aggressive and interrogative manner, would be “Fuck you.” Instead, taken aback, I simply said, naively, “No, why do you ask?”

“Because I’m a Nazi. A new Nazi,” the young man replied, with a touch of inane pride. At which point one of our group, which was mostly Jewish guys, said he thought it was time to go, and he was right. We kept an eye behind us as we made our way out the door.

That the young man should make such an assertion of allegiance is surprising, as Germany has become understandably sensitive to Nazism. Germans are not afraid to acknowledge the evil Nazism represented, and they go a step further by outlawing the use of Nazi symbolism. So, to confess one’s allegiance to the Nazi Party was a legally precarious display of bravado. Public displays of Nazi sympathies, like those on view in 2017 in Charlottesville, would be strictly forbidden in Germany. And as we see our own government taking a hard right toward authoritarianism and a violent cult of personality, the vicious trap that the average German fell into during Hitler’s rise to power becomes more understandable. Never has it seemed more likely that “it” could, indeed, happen here. One hopes that if the worst does occur in our country, that future generations will recognize that we weren’t all members of the KKK, the American Nazi Party and other forces of intolerance.

None of that darkness was in evidence in Rosemont last week, where we got an early start to Oktoberfest. 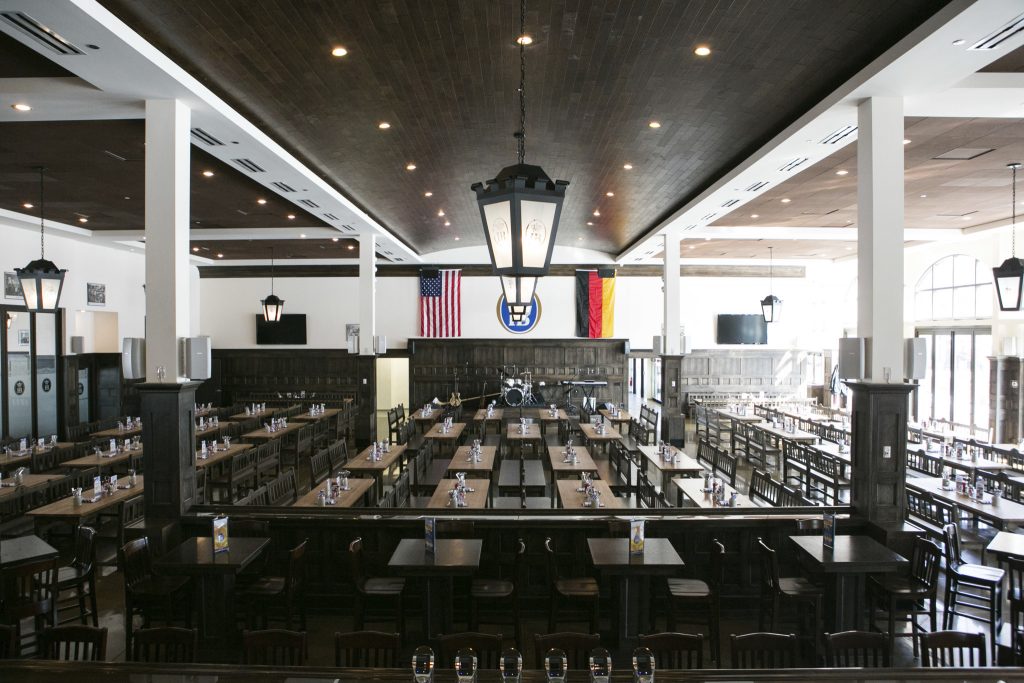 Rosemont’s Hofbräuhaus is one of multiple franchise locations around the United States that carry on the well-known name of Munich’s centuries-old beer hall. Says brewmeister Rob Hunter, “We make not only the lager, but all of the beers in strict accordance with the Bavarian Beer Purity Law, using only the finest malt, hops and yeast from Germany. We brew the authentic Munich recipes in a traditional German brewhouse that was designed and manufactured in Germany along with all the tanks and cellar equipment. I like to tell our brewery guests that everything for the beer comes from Germany except the water… and me.”

Samples of beer are sent to German labs on a regular basis to ensure that the brews served in Rosemont and other U.S. locations taste as much as possible like the brews served at the original Hofbräuhaus in Munich.

In the late nineteenth and early twentieth centuries, German immigrants to the city helped raise Chicago to a world-class beer city. Though anti-German sentiment sharply increased around the times of both World Wars, initial anti-German sentiment was due, basically, to xenophobia and intolerance, the kind that today is more focused on African-Americans, Mexicans and Muslims.

John F. Hogan, author of “The Chicago Beer Wars,” told me in a 2016 interview about the historic clash on Clark Street bridge between German immigrants and police. This bloody confrontation was sparked by Mayor Levi Boone’s prohibition on Sunday beer sales: “The riot was about beer, of course, but it also represented a release of tensions that had been building for years. Since its earliest days, Chicago had been governed and largely owned by old-line Yankee stock that traced its origins back to the Puritans, those folks whose greatest fear was said to have been that someone, somewhere, was having a good time. These stern people became increasingly alarmed over the growing influx of immigrants, particularly German.

“Beer has been a centerpiece of German culture since time immemorial,” Hogan said. “The beer hall was more than a place to down a few. It was a community gathering spot that welcomed families and people of all ages, a place to meet friends, exchange news, read German-language newspapers, sing, dance, listen to music.”

All the best aspects of the German beer hall—singing, dancing, and so on—are in evidence at Rosemont’s Hofbräuhaus. The food, too, is classic German. General manager Brad Cool tells us, “We take pride in providing our guests with the most authentic experience as possible, following traditional recipes to bring the Bavarian culture to Chicago.”

Our favorite wursts are:

Leberkäse. This is a square of emulsified pork or beef, baked in a bread-type pan and served sliced. I had a leberkäse years ago at Christkindlmarket, loved it, but haven’t since seen it served this way at that annual Christmas market in Daley Plaza. At Rosemont’s Hofbräuhaus, you can get this dish the way I remember it, which I greatly enjoy. It is, truth be told, basically a griddled hot dog meatloaf. It’s way better than it sounds. 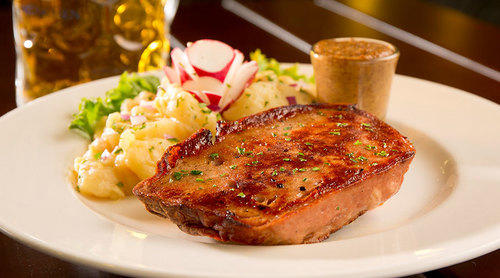 Weisswurst. The story goes that a butcher in Munich was preparing to make bratwurst when he discovered he didn’t have all the ingredients, so he improvised with veal, pork, bacon, onions, salt, pepper and lemon powder. He called his creation weisswurst, and traditionally, and at Hofbräuhaus, this sausage is served in a bowl of hot water. The tradition is to bite off the end of the moist sausage and suck out the contents without eating the skin; kinda gross but fun. 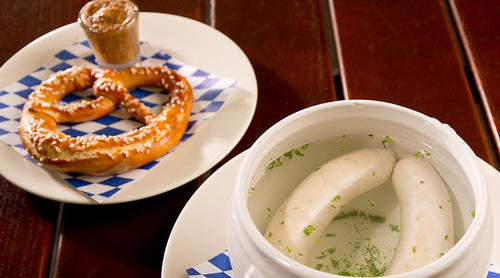 Currywurst. In postwar folklore, a German charwoman in bombed-out Berlin traded some English soldiers a bottle of schnapps for a tin of curry powder. She added the curry powder to ketchup, poured it over sausages, and a street-food classic was born, now much beloved. There is a Currywurst museum in Berlin, a few yards from the old Checkpoint Charlie, and the sausage is still sold all over the city and country.

At the Rosemont Hofbräuhaus, the barmaids in dirndls come around the tables to offer diners a spanking with long wooden paddles. At our table, two young blue-eyed blondes, a man and a woman, both in lederhosen, probably in their thirties, eagerly stood and leaned over their chairs to receive their public paddling.

“Is this a German thing?” I asked the general manager on duty during these festivities. “No, not really,” he said. “It’s a U.S. thing; it started in Vegas and caught on in Chicago.”

Looking around the room at Rosemont’s Hofbräuhaus, you can see why the beer hall is one of Germany’s great gifts to the world. People are laughing and drinking and singing; having a good time through good times and bad.

Hofbräuhaus in Rosemont celebrates Oktoberfest from September 13 through October 31. There will be lots of traditional German food and drink, as well as German musicians imported for the occasion, including a forty-piece bugle band. Of course, well-muscled barmaids will gladly administer a spanking, if that’s what you’re into.