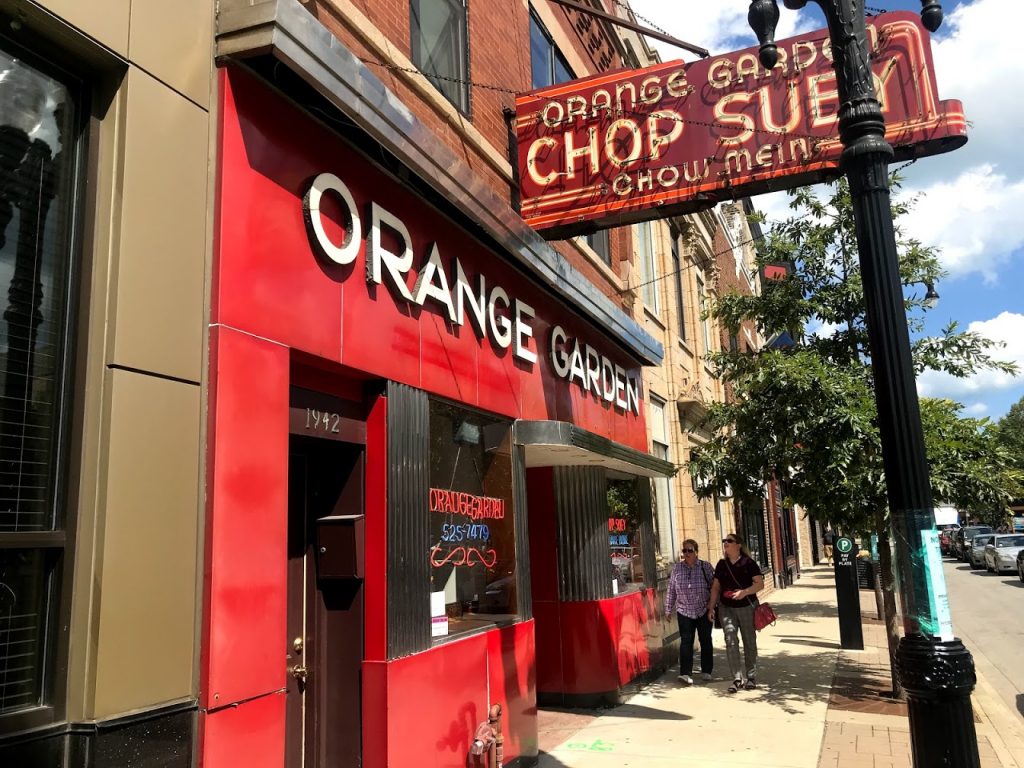 Sitting at one of only two tables in the front dining space at See Thru Chinese Kitchen #23 (5609 West Division), I’d just walked back from the carryout window and pulled open the big white styrofoam container holding my General Tso’s Chicken when two women walked in. One looked at my meal and exclaimed, “Damn, that looks good.”

It did look pretty good, glistening with what I suspect was an unusual amount of sugar in a sauce that also contained flecks of hot red pepper, drizzled over a golden mound of fried chicken blobs, with baby corn and irregular chunks of green bell pepper here and there, set against a gray hillock of shrimp fried rice. I ate it all.

General Tso’s Chicken is one of those dishes that’s a punchline because it’s so… American. Much like Tex-Mex food, which tends to overdo the cheese in a way traditional Mexican food does not, and Italian-American food, which unlike traditional Italian food uses way more garlic, meat and, yes, cheese than would be done in Europe, Chinese-American food tends toward the sweet end of the food spectrum. 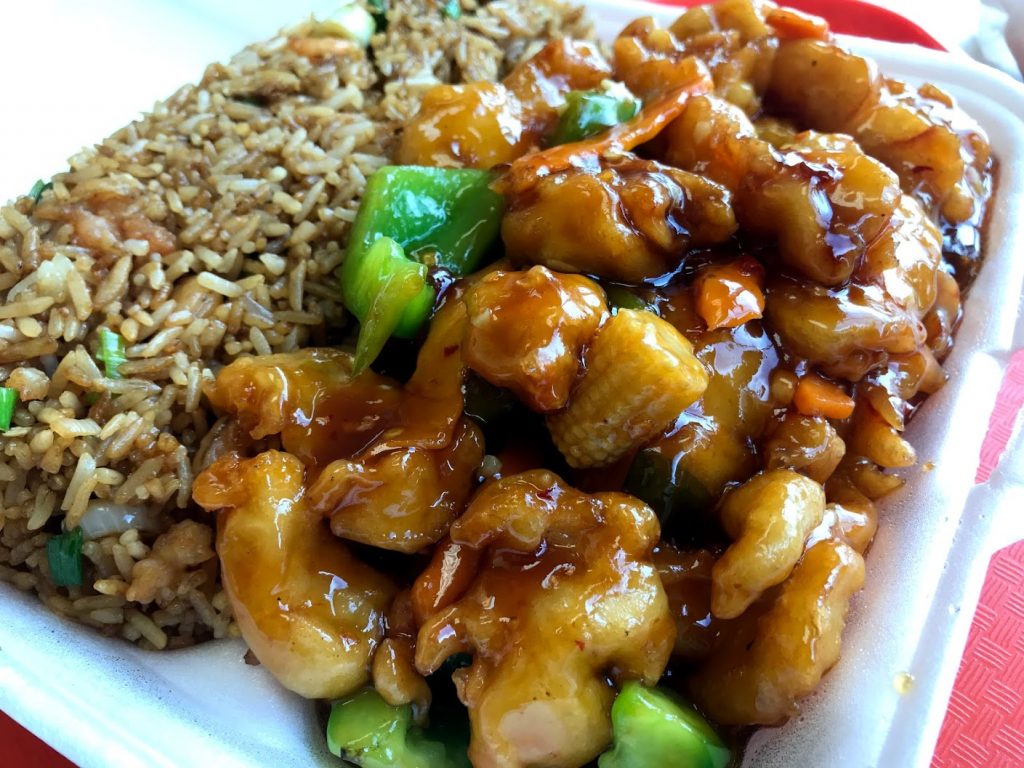 There is little or no evidence that General Tso’s Chicken originated in China. British chef Fuschia Dunlop makes the case for the dish originating with a Hunanese chef named Peng Chang-kuei, who emigrated to Taiwan after the 1949 Communist revolution and came to New York in 1973, opened a restaurant, and served modified versions of traditional Chinese recipes. General Tso’s Chicken was a hit. Reviewing the restaurant in the New York Times in 1977, Mimi Sheraton gushed that “General Tso’s chicken was a stir-fried masterpiece, sizzling hot both in flavor and temperature.” Peng returned to Taiwan in the 1980s and opened the first of a chain, Peng Yuan, that soon closed because, in part, native-born Chinese seemed to find General Tso’s Chicken too sweet for them.

The See Thru Chinese Kitchen empire has almost twenty locations around the Chicago area, making it the second-most popular chain after Panda Express. There is, of course, a tier of relatively inexpensive and—to be honest—generic Chinese-American food outlets, frequently in strip malls, but unlike See Thru Chinese Kitchen or Panda Express, these small take-out places are mostly small businesses rather than part of a larger group. So: why do all these strip-mall Chinese restaurants look alike and have the same menu items—even similar-looking menus?

Jennifer 8. Lee investigates the amazing uniformity of small Chinese American restaurants in her book “The Fortune Cookie Chronicles” and in her 2008 TED talk, “The Hunt for General Tso.” According to Lee, a loose nationwide affiliation of Chinese-American restaurants and take-out joints get their products from the same sources. For instance, Fold-Pak sells two-thirds of the takeout containers used in the industry, and Kari-Out makes most of those little, watery packets of soy sauce you always get with your orders. Through industry publications like the monthly Chinese Restaurant News, delivered to over 40,000 restaurateurs, Chinese-American takeout restaurants from Key West to Seattle are connected by invisible threads. “If McDonald’s is the Windows of the dining world (where one company controls the standards),” Lee says, “then Chinese restaurants are akin to the Linux operating system, where a decentralized network of programmers contributes to the underlying source code.”

Orange Garden (1942 West Irving Park) is a jewel of Art Deco design, although otherwise it’s a standard Chinese-American restaurant. The menu reads like a listing of greatest hits, but the reason you go to Orange Garden is for the old-school vibe. The retro façade features fluted metallic columns on either side of shiny, metal-trimmed doors. There’s a second floor, in the classic arrangement of business space on the first floor and living space for the owners on the second floor. The neon sign in front advertises chop suey, for years a dish synonymous with Chinese-American cuisine. Inside, there are gold chandeliers, Chinese artwork on the walls, and red, a lot of red. In the evening, the servers put out traditional Chinese zodiac placemats. What you want is probably the egg rolls and Sesame Chicken, another Chinese-American classic, said to have originated in California with Chinese immigrants.

Luo’s Peking House (113 North Marion, Oak Park) prepares a mean egg foo young, a food also attributed to Chinese migrants in California working on the railroad. Like Orange Garden, Luo’s Peking House is old school, painted an avocado green, likely sometime in the seventies, with vinyl-backed chairs and aging fixtures that make the place even more lovable. At lunchtime, you get an egg roll, soup, entrée, fried rice, tea and fortune cookie for about eight dollars. It’s a deal you cannot beat, which is very much in the tradition of the great Chinese-American restaurants. The neon in the window assures “The Best Chinese Cuisine in Town” (with “CHINESE CUISINE” in bold red). We always get a big order of egg foo young; at home, we put the leftover patties on white bread with lettuce, tomato and mayo, a classic of Chinese-American cuisine: the St. Paul Sandwich, invented in St. Louis, is a strange and strangely delicious creation. 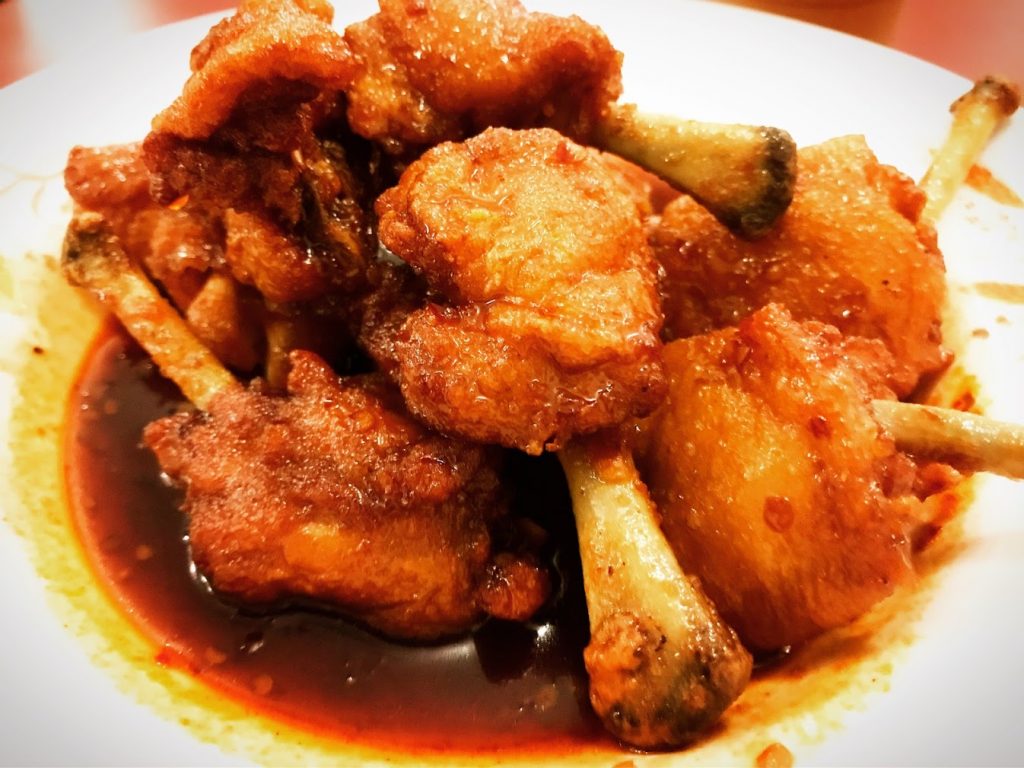 Great Sea Chinese Restaurant (3253 West Lawrence) has the usual offerings, and one very special one: Lollipop Chicken Legs. When we were last at the Chinese-Korean Great Sea, a platter of these hugely popular legs graced every table. What makes them so delicious? People who live in the U.S. are accustomed to the taste of sweet, thus the almost too-too sugary syrup that covers General Tso’s Chicken and Orange Beef. The folks at Great Sea Chinese Restaurant, who were one of the first Chicago restaurants to serve Lollipop Chicken Legs (also called gam pong gi wings), recognize the Yankee predilection for sweetness, but they use sweet as one flavor among many, including spicy-hot and savory. We Yanks also dig convenience, and so the meat on the Lollipop Chicken Wings is pulled up to the end of the bone, providing a handle for easy eating.

When Harvey Keitel and Robert De Niro and friends run out of money in Martin Scorsese’s “Mean Streets,” they go for Chinese. Chinese-American cuisine is a traditional value food, and at each of these restaurants, you can get lunch big enough to share for under ten dollars. Try finding a deal like that elsewhere, even at McDonald’s. Even if it’s sometimes a little more fried and a little more sweet than you might prefer, Chinese-American food—or perhaps we should call it American Chinese—hits a lot of our buttons, and it is, indeed, damn good.