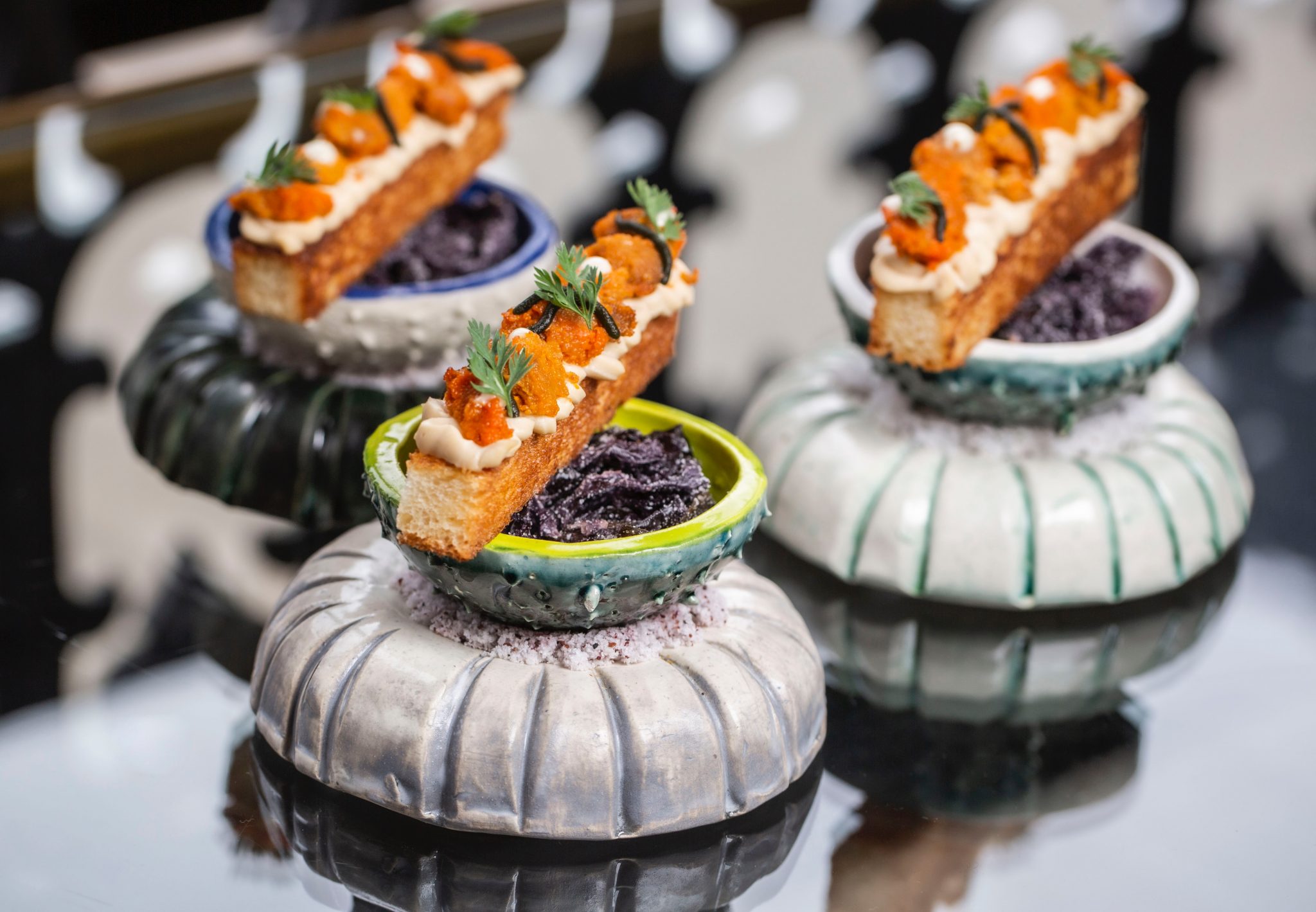 Uni Toast, the sex organs of the aquatic creature dressed up, put on toast, and served on a bed of seaweed/ Photo: Ethan Jollie

“It’s absolutely crazy,” says Daniel Alonso, co-founder and managing partner at Bonhomme Hospitality Group, which handles restaurants like Beatnik, Black Bull and Porto. “If you were to print out our business plan and present it to your college economics professor, they’d laugh you out of the classroom. It’s even risky to do a seafood-only restaurant in parts of Spain or Portugal. If you talk about doing a restaurant like that in Chicago, you’re past crazy. But we wanted to take a chance.”

Alonso is talking about the recently opened Porto (1600 West Chicago), which serves almost exclusively fish and seafood. In mid-January, there were only two pork offerings. And here’s another risky choice: much of the fish and seafood comes in cans, and for many years in this country, canned food has been considered, um, déclassé. These cans are filled with conservas, tins of preserved fish and seafood that line the walls of Porto, a restaurant devoted to the cuisine of Portugal and the Spanish region of Galicia.

“We wanted to bring the very best to Chicago,” Alonso says, “and that means conservas, [a method that] started long ago so that people could have fish year-round. When the seafood is fresh, you enjoy it fresh, but in Galicia and Portugal, you have only two-to-three months to enjoy fresh seafood. So how do you stretch that out? Through preservation of the fish.”

But conservas are more than simply preserved fish, says Alonso. “What they’re putting in the cans is finer quality than you will find anywhere.”

Conservas are not cheap. A 3.9-ounce tin of La Brújula tuna can sometimes be found for twenty dollars or so on Amazon. Selling super-high-quality conservas is an expensive proposition, so Alonso and his team have worked to develop an efficient and economical supply. “We’ve been going to the individual cities in Galicia and Portugal, working with the fishermen, working with the fishmongers and establishing a direct-purchase relationship. What kills you on seafood is the price. The more hands that it goes through, the higher the product cost, and everyone needs their cut. This is a practice as old as the Phoenicians. We want the very best product, but we don’t want to price ourselves out of the Chicago market. So we’ve established relationships, and we’re working directly with the port. We’ve even been playing matchmaker with local companies in Chicago and with the producers in Spain. We say, ‘Let’s be reasonable, folks. We know the price of this seafood at the port, and we realize what you need to make a living, but we’ve created this market, so let’s work together to get this extraordinary seafood to Chicago.’”

Porto does serve exceptional fresh seafood, specifically turbot and the rarely seen John Dory, but even the canned food is further crafted by executive chef Marcos Campos. Along the Atlantic coast of France, Spain and Portugal, it’s not uncommon to see restaurants serving sardines and other fish right out of the can. Alonso and Campos are aiming to do more than that.

Many of us had our first bite of seaweed in a Japanese restaurant, and it was probably wrapped around a roll of some sort. Alonso believes that Tokyo and Portugal are similar: both are on the ocean and both have huge seaports and lots of seafood. In Portugal, the seaport in Vigo is the source for many of Porto’s conservas and seaweed. Porto gets shipments of fresh seaweed twice each week, and when we visited, they had seven kinds of seaweed in their kitchen. The seaweed, says Campos, “is what we used to eat. In Galicia, it’s an everyday item, maybe not fancy enough to be in a restaurant. But the flavor, the smell, it brings me back to when I’d be in the Spanish seafood markets with the fishermen. When I came to work at Porto, I realized I needed to find ingredients that say ‘Galicia’ to me.” 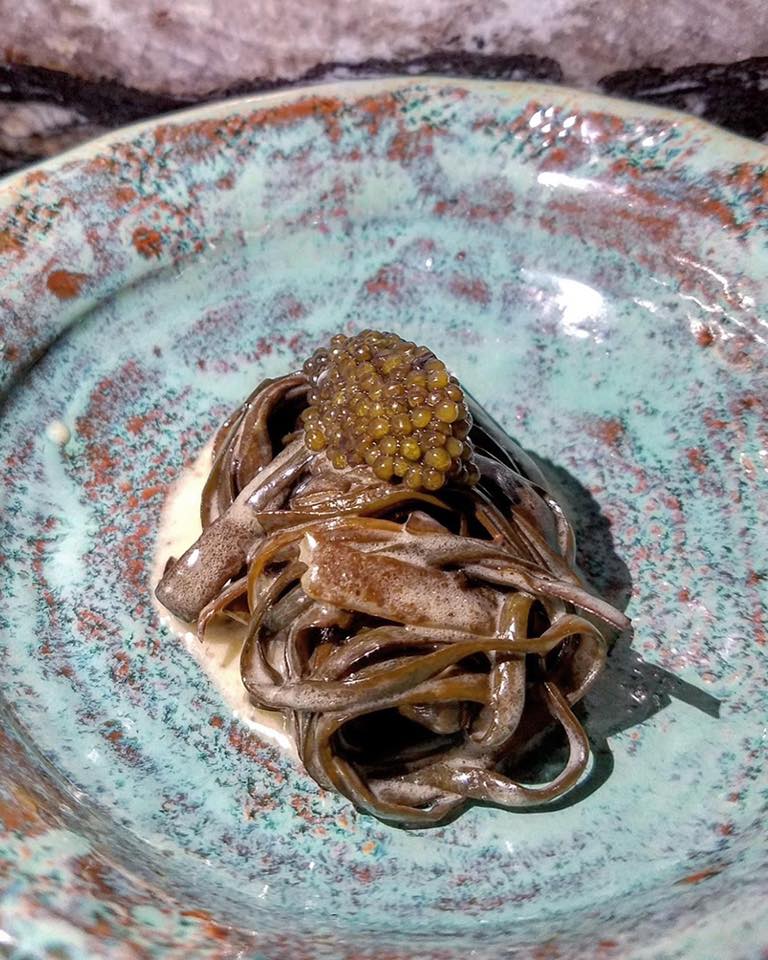 One innovative Porto dish that shows off the pure oceanic depth of seaweed taste is the Pasta Do Mar, which contains seaweed “spaghetti” (fettucine-like ribbons of the aquatic vegetable) in a creamy “carbonara” sauce that uses smoked mussels rather than smoked bacon. This gluten-free pasta is full of flavor, and the strands of seaweed are naturally al dente. “I’ve never seen a dish like this in Spain,” says Campos, “and usually, in Spain, they eat this seaweed cold, like in a salad. But Chicago is a city that loves pasta, and we wanted to make a pasta dish that had all the ingredients coming from the sea.”

The ingredients at Porto are traditional, many centuries old; the preparations are 2020. This approach works well in Chicago, though perhaps less so in Europe. “Many people in Galicia just want traditional cuisine. They want well-done traditional food, and they’re not open to trying something new. For Porto, I wanted to do something new, as I do with the conservas. In Galicia, they just open the can and eat. They don’t use conservas to build other dishes. To me, conservas deserve more respect.”

About mussels, I had almost given up on them. Having far had too many bowls of vapid, stringy mussels that were only as satisfying as the sauce they were cooked in, I didn’t see the point. But then I tried one the mussels at Porto in the Mejillones Escabeche. These mussels, also from Alonso’s Brújula trading partners, were oceans apart from the sad varieties of this sea creature we’ve eaten many times stateside. These canned mussels had density, body and multiple dimensions of flavor. At Porto, Campos adds touches that make these mussels—as well as many other conservas—even more delicious and interesting. Using an escabeche espuma (foam) with a slight acidic bite to balance the deep flavor of the mussel, Campos says that in Spain, “I find the escabeche a little heavy with vinegar and oil. I wanted to find a super-light way to make escabeche, so that you’d enjoy it more. And eat more of them!” 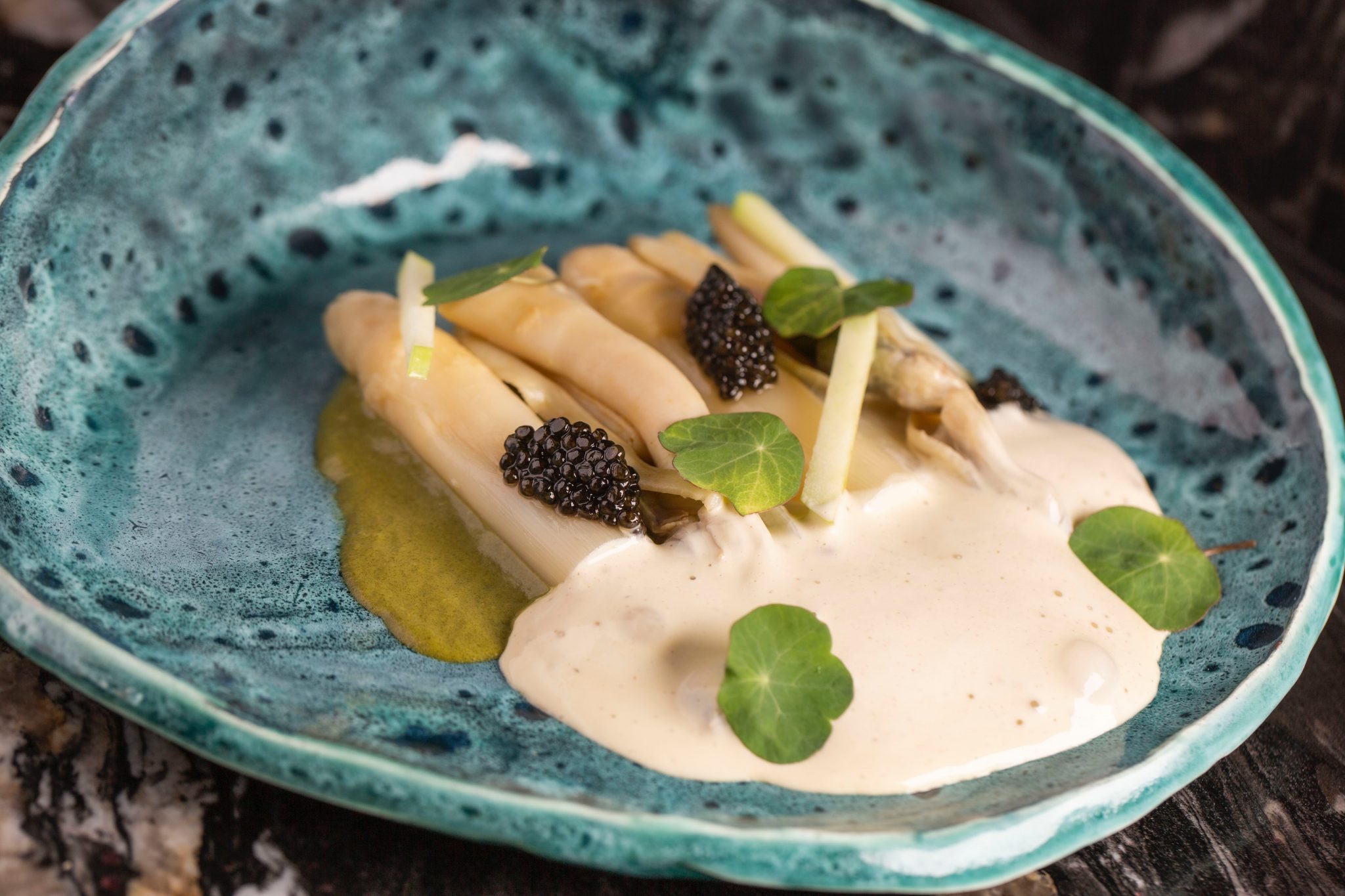 Another dish that knocked us out was Navajas & Espárragos, a beautiful little dish of razor clams and white asparagus, codium seaweed “guac” and a dab of caviar. So simple, so elegant. This was our first taste of codium seaweed, technically the only fresh ingredient in this dish. Conservas, as an integral part of Atlantic coast food culture, are harvested in a eco-friendly manner that yields a tastier product. Says Alonso, “Razor clams, most of the time, are vacuum-fished; there’s a guy down there dragging the vacuum across the seabed. You’re scooping up razor clams, but you’re also scooping up a bunch of sand. If you eat a lot of shellfish, you’ve come across a bite of sand, and that ruins the experience. La Brújula sends down guys in scuba gear who hand-harvest the razor clams one-by-one. And they will take only the razor clams of a certain size,” which ensures that populations will survive and that there will be razor clams for years to come.

A key advantage of eating at Porto’s big wraparound bar is that the design is intended to facilitate conversation between chefs and diners—which means, as a diner, you might learn something as you eat. Campos served us a plate of Jamón Ibérico the costly meat of the Black Iberian pig. In the past, I’d jump on Jamón Ibérico like a hobo on a ham sandwich: big mistake. “Put the ham on your tongue,” instructed Campos. “Hold it there for a little and let it start to melt before you chew it.” The difference in flavor was immense.

As we enjoyed more dishes of conservas, Campos suggested that at home, even from a can of King Oscar sardines, we should save the oil infused with fish essence. “We save all the oils that we get from, for instance, the sardine and mackerel conservas. You have so much umami in there. We’re making an XO sauce of it, but at home you can use the oil for salad dressing.”

Excellent advice, and an example of how going to Porto is part of any culinary continuing education, as well as an absolutely delicious place to spend an evening.