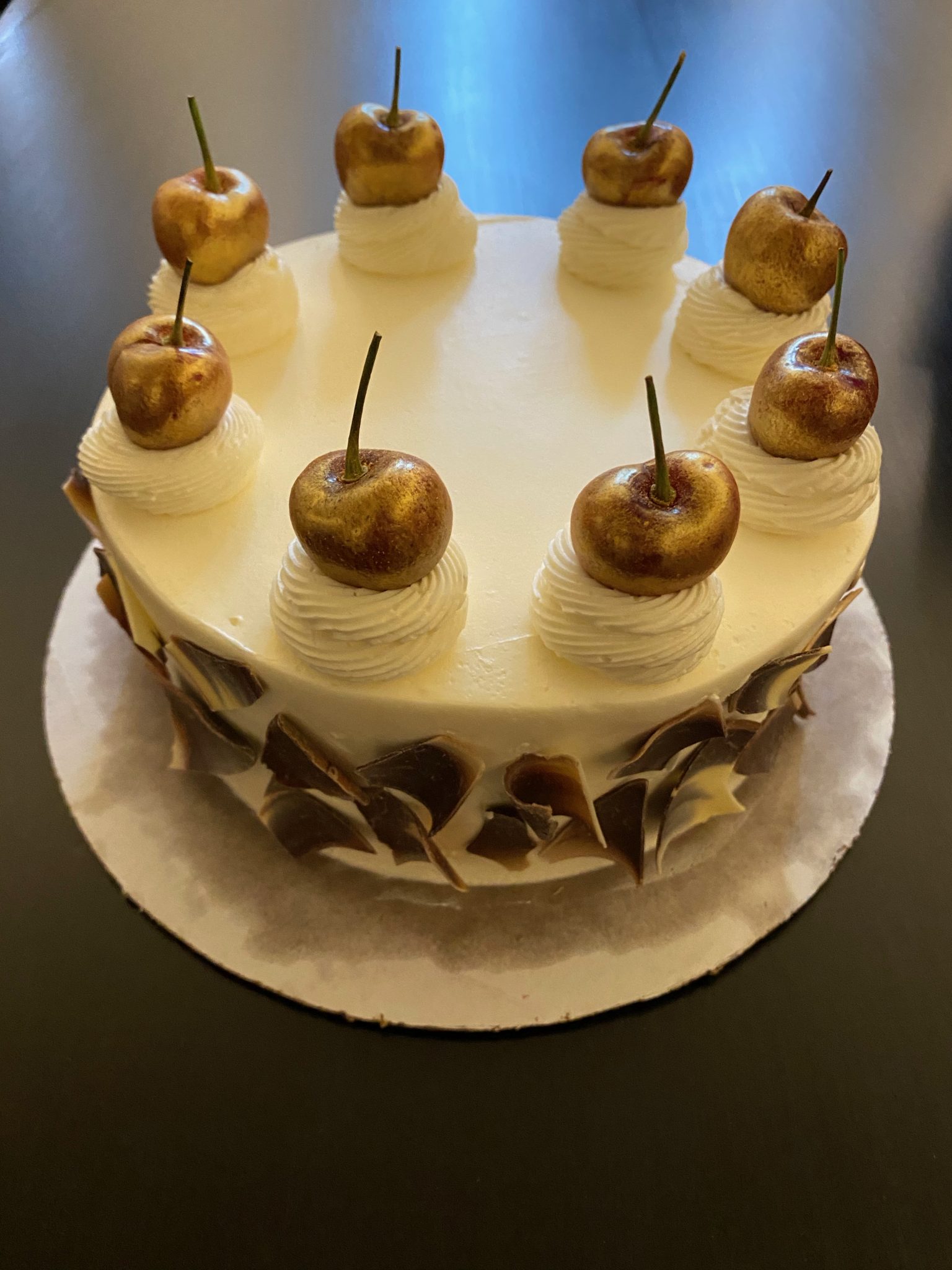 One of the positive developments arising from the larger catastrophe of the pandemic is the way restaurants have discovered new ways to serve their customers and communities. Acadia, the Michelin two-star restaurant in the South Loop, discovered that although their customers are loving Acadia’s changing curbside-delivered dinners, what people really want to eat is cake.

“I woke up this morning, and by the time I showered and got dressed, I had like ten more email requests for cakes,” chef-owner Ryan McCaskey says.

“We totally did not anticipate anything like this. It started as a favor. Someone had wanted cupcakes, and they asked, ‘Do you guys do anything like that? We don’t want to go to Mariano’s or Jewel.’ I said, ‘Well, sure, we can do that,’ and next thing you know, we’ve done like two-hundred cakes in two-and-a-half weeks.

“We’re doing red velvet, carrot and flourless chocolate cakes, and we started doing fruit tarts. Standard is yellow cake with buttercream frosting, and then the garnish is up to me. Those are probably the most requested, and they’re also the ones I like doing the most, because you have a blank slate.

“We’re receiving a lot of requests right now that are like, ‘We were supposed to get married last weekend, but now that’s postponed, so we thought we’d have a celebration with a mini-wedding cake.’

“The whole idea was that if we do a couple of these a week, there’s the extra money, which helps pay staff, buy product or whatever, but Mother’s Day we ending up doing thirty-five cakes, just for that Saturday.”

Gearing up to produce around a hundred cakes a week has motivated a rearrangement of Acadia’s production flow.

“We’re not set up like a bakery. We’re doing this out of the pastry station in the corner. It’s nuts. We had to go out and buy cake pans and a cake stand, piping bags and tips.

“We streamlined it pretty well. We have the two people who make the cakes and they frost them. Then they give them to me, and I do all the decorating. Every cake you see, I basically just did.

“At some point every day, I say, ‘Guys, I need some cake decorating time,’ and they drop the temperature of the dining room to fifty-five or sixty degrees. It’s pretty cold for an hour. The whole credenza in the dining room is full of cakes. I go down the row, and there are all these cakes with their special requests and notes with an explanation of the occasion, anniversary, graduation, whatever. We cleaned out our cooler by the wait station, and we have single- and double-door coolers for white wine and Champagne; we moved all of that out. That whole cooler is full of cakes now.”

While many restaurants are furloughing employees, McCaskey is hiring more staff to take on the challenge of the cakes.

“We did just recruit new help, which is amazing, Claire Crenshaw, who was a pastry chef at Moto and Tru. She was at the Drake and she’s been furloughed, so I called her and said we needed help.

“Claire will be helping with the main menu, and we’re changing our menus every four to five weeks now. We’re finishing up Italian right now and then we’re moving into Spain, which I’m very excited about. We’re going to have giant prawns on the plancha, simple and shareable, and perfect for the weather change. We’re also doing the Basque cheesecake thing, but I told Claire we can do cookies, we can do Spanish tarts, we may add a few new things to the menu now that we have someone who can handle it. 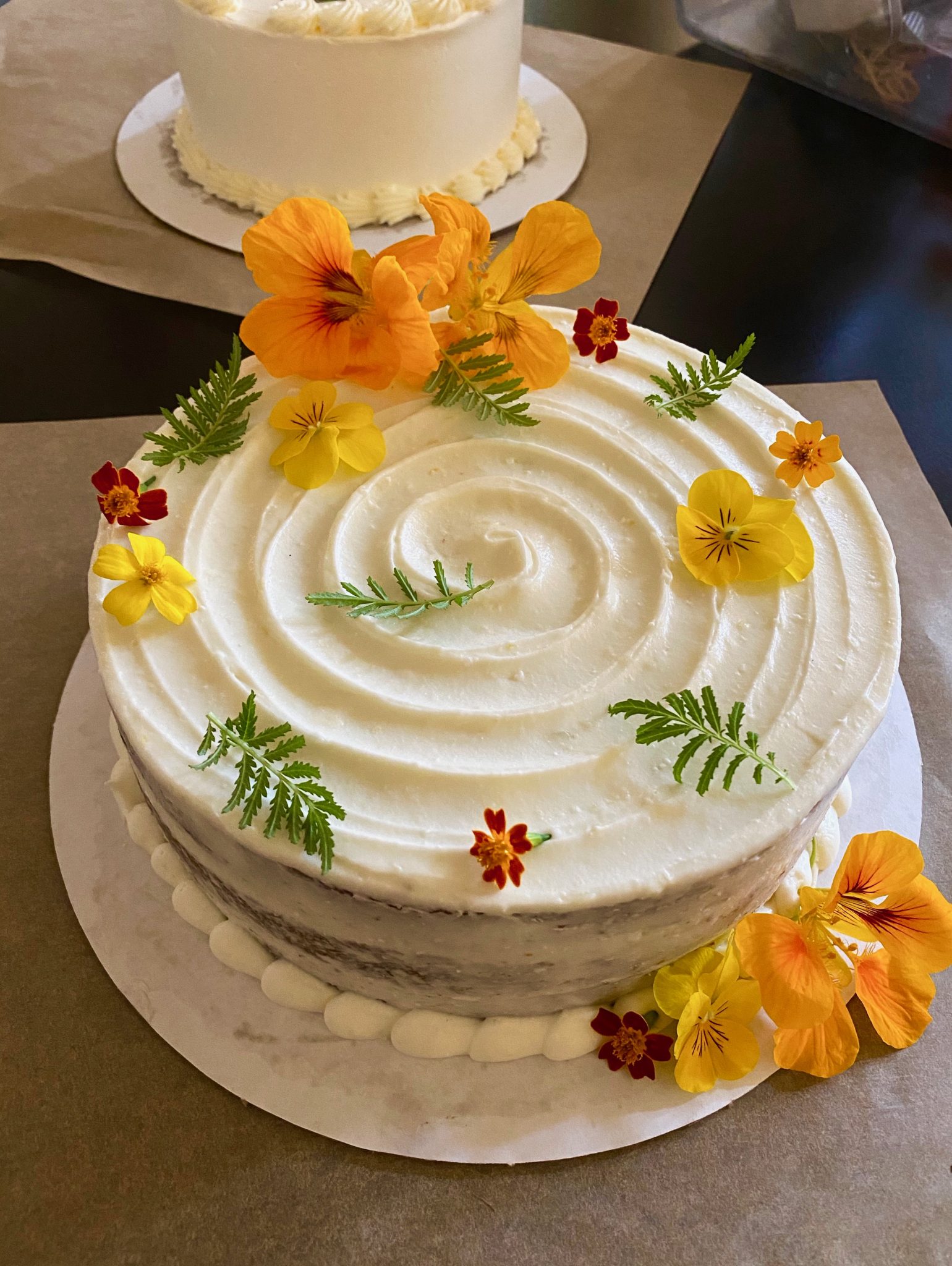 Cakes are just one of the ways Arcadia is evolving. On Saturdays, weather permitting, McCaskey and crew run a free market grocery day, which has provided 1,500 pounds of food to the needy, as well as neighborhood folks who might walk by and see something they like.

The Acadia team is also serving on the frontline at local hospitals. ‘Yesterday, we cooked another 150 meals for a local hospital. I take about half-a-Sunday off, maybe half a Monday. I’m working more now than the first year we opened. We do 150-500 meals per week for frontline workers at hospitals. We’re on-call. A hospital will contact us and see if we can come by on a specific day, and we go. I drive the food down in my car.”

McCaskey is experimenting with merch, too: “We’re selling T-shirts that feature some of my sayings, things I say in the kitchen and that people who’ve worked at Acadia know I say. They’re more on the order of what you might hear from Gordon Ramsay or Marco Pierre White, maybe a little less PC. I’d like to start designing a backpack, maybe totes, and we might be doing hoodies soon.”

New consumable items are planned as well, but the changes at Acadia go beyond that. McCaskey is moving ahead to transform the business in ways that would be difficult to implement if the restaurant were doing business as usual “We’re renovating Acadia. As soon as this thing lifts, it’s going to be Acadia 2.0. It’s going to look like Acadia, but revamped.”

McCaskey says, “I’m so tired, but as long as I can keep it going, whenever we get news that we’re coming out of it, we’re going to be ready. It’s going to be brand new, and we have a new format, and the dining room will look different. It won’t be just ‘back to Acadia.’ It will be a new thing. We joke that we may call the new place ‘A-cake-ia.’”

“We’re not advertising our cakes so it’s all word-of-mouth. I tell people that if they want a custom cake, we’ll need three-to-four days’ notice. Just email at Rmccaskey@acadiachicago.com!”