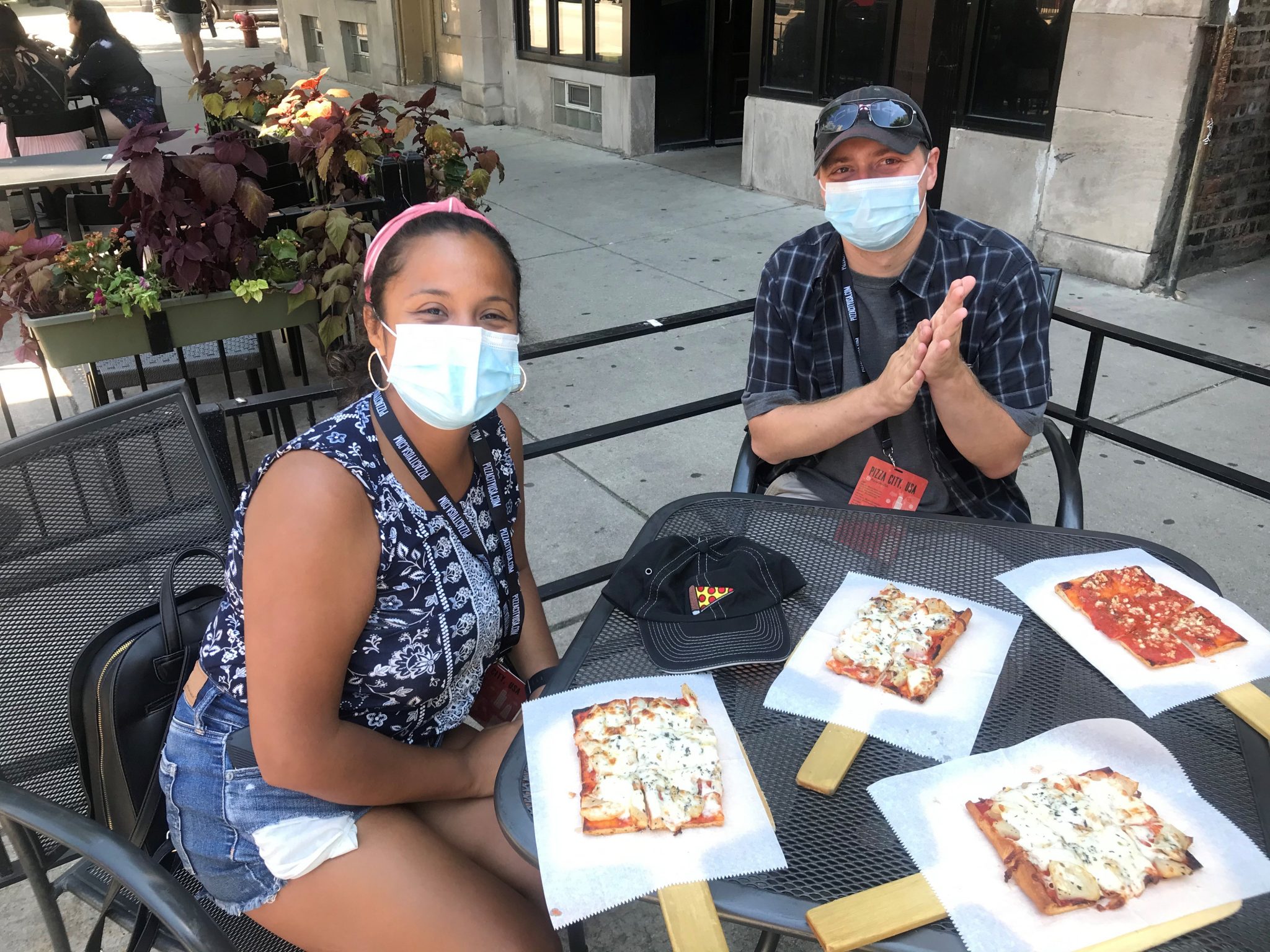 Anyone who’s lived in Chicago has heard of Steve Dolinsky, thirteen-time James Beard Award winner, Hungry Hound on ABC, and host of the Feed podcast whose photograph seems to be beam down from the walls of half the city’s restaurants. In 2018, Northwestern University Press published “Pizza City, USA: 101 Reasons Why Chicago Is America’s Greatest Pizza Town.” Shortly after, Dolinsky began running pizza tours that take locals and out-of-towners to pizza joints both familiar and not-so-much. Then, late in winter, before the pizza-touring season could begin in earnest, the tours weren’t possible.

In July, Dolinsky restarted the tours with precautions in place. Bus and walking tours are now limited to twelve, and each bus or van has glass partitions and undergoes an electrostatic cleaning before tours. Each group of family or familiar others gets its own table, and all seating is outdoors.

Dolinsky eats lots of pizza. But he’s also a scholar of the pie, so I had some questions for him.

Have you learned anything new about Chicago pizza through the pizza tours?

“I’ve learned that most locals really haven’t tried more than a handful of pizzas in their lives. Most people tend to stick to whichever pizza takes the least amount of time to be delivered to their house. I learned about the true origins of stuffed, which started at Nancy’s in ’71, not Giordano’s in ’74. Nancy’s stuffed pie, a nod to the Italian pizza rusticas stuffed with salami, eggs and cheese, was a reaction to all the deep-dish places opening that year. They wanted to do something different. Giordano’s was started by a pair of Argentinian ex-Nancy’s employees.  1971 was truly the Golden Age of Pizza in Chicago, as Lou Malnati’s, My Pi, Pequod’s and Nancy’s all opened their doors.”

Most of us born-in-Chicago lifers have learned to suppress an eye-roll when people come to town asking for deep-dish pizza.

“Out-of-towners think that all we Chicagoans eat is deep-dish. Despite the number of options for deep-dish near Michigan Avenue hotels, we are a thin-and-crispy, tavern-style square-cut town. Deep-dish is not stuffed. There is a difference, and it’s massive. A proper deep-dish, or deep circular pan, is not necessarily a ‘lasagna in a bread bowl’ or an ‘above-ground outdoor pool.’ Those are descriptions of stuffed pies.” 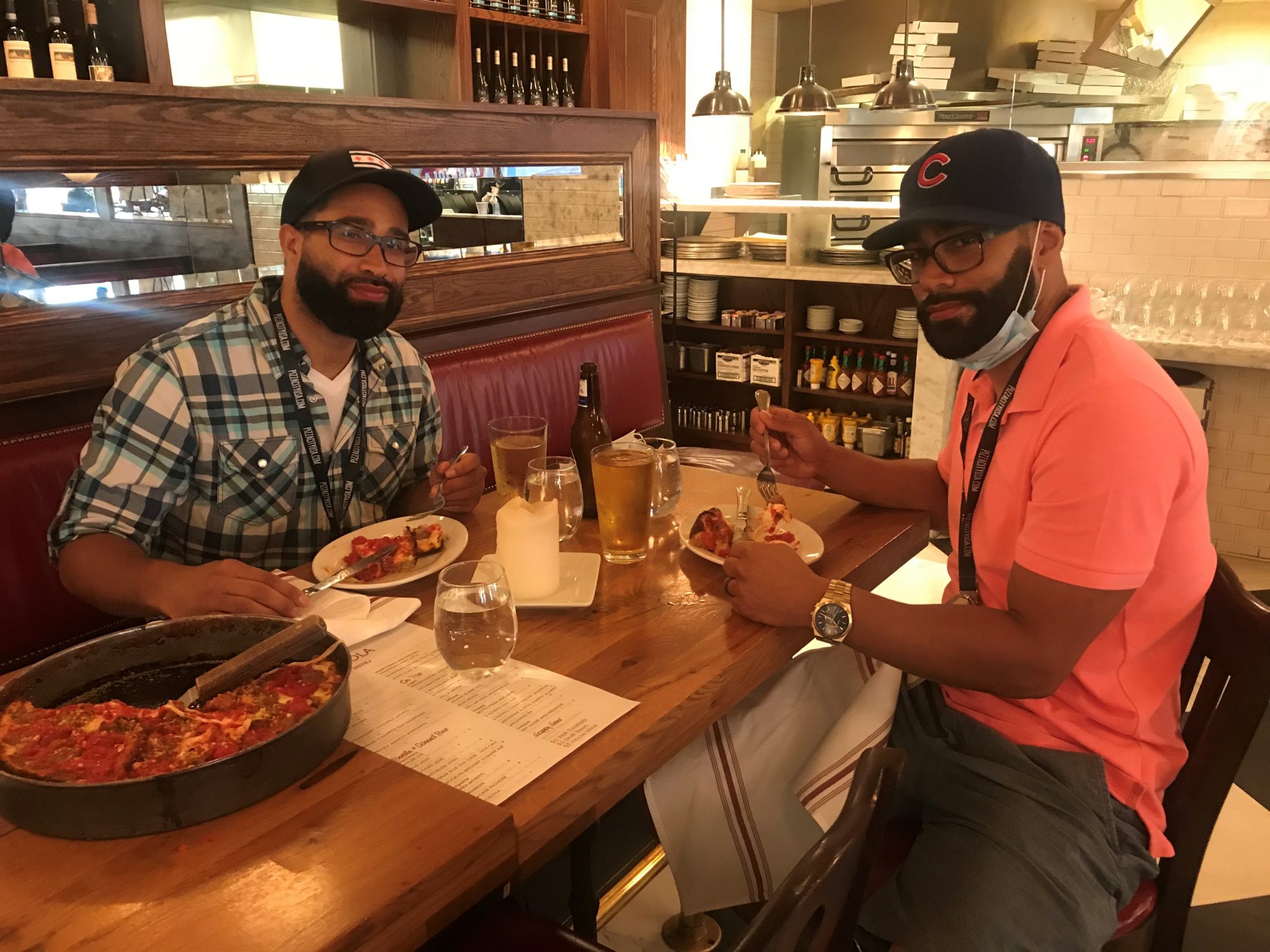 “Some reeducation takes place on these tours, people’s assumptions are challenged, and their taste buds lead participants into a deeper understanding of what Chicago pizza is.

“’Chicago-style’ means three things: stuffed, deep-dish and tavern-style; if you’re really going to the heart of what a true, dyed-in-the-wool Chicagoan eats on a daily basis, it’s tavern-style.”

Have to admit, when I was a kid growing up in Portage Park, it was all tavern-style, all the time. With the popularity of Neapolitan, Roman and regional varieties, are there any consistent standards for evaluating a pizza pie? For instance, when pizza, any pizza, is less-than-awesome, what went wrong? What do you find totally unacceptable in a pizza pie?

“An out-of-whack ratio, as in way too much cheese or a mouthful of chewy, uninspired dough. There’s a place in Lincoln Park people ask me about all of the time; it’s melted cheese in a bowl, not really pizza, and I find that very hard to swallow, literally and figuratively. Also less-than-awesome crusts that are either too hard or bland, usually due to not enough salt or fermentation.”

Dolinsky is too diplomatic—or simply too kind—to name the restaurant, but we’re not, so we’re going to hazard that he’s referring to Chicago Pizza and Oven Grinder Company, purveyors of “pizza pot pie,” the stuff of nightmares for lovers of any of the ten styles of pizza available in Chicago. In fairness, it should be noted that the pizza pot pie was featured on WGN’s “Chicago’s Best,” and gets a fair share of positive Yelp reviews like “I know Chicago is known for their Deep Dish, but have you tried the Pizza Pot Pie?! It’s amazing!“ and “my absolute favorite deep dish(ish).” De gustibus non est disputandum, I guess.

If we accept the premise that Chicago is the Pizza City, what American city is second-best and why?

“I’ve been to NYC a lot over the past three years—I’ve now visited about sixty places—and I think the scene there is as remarkable as anywhere else. They always will beat us on size, as in the number of potential places. But with the exception of one or two places, deep-dish and tavern-style don’t really exist there. They have us beat when it comes to slices, squares and Grandma-style, though. I find the places that excel there do so because of incredible attention to detail and consistency. Scarr’s, Mama’s Too!, L’Industrie, Philomena’s… I  can’t wait to get back to eat those again.”

In “Pizza City, USA,” Dolinsky presents the concept of “PIGUE,” or Pizza I Grew Up Eating, which is the theory that we love the first pizzas we had and these first bites of pie become the standard by which all others will be compared. I wondered, though, why the concept of PIGUE seems not to apply to other foods. Many boomers grew up eating TV dinners, Pop-Tarts, canned asparagus, foods that in adulthood we’ve tried to avoid.

What was it about those first pizzas we ate that forever shaped our perception of good pizza?

“Because pizza equals good times. You ate canned asparagus?!I can only imagine the pain associated with that. To paraphrase James Earl Jones in ‘Field of Dreams,’ Pizza reminds us of everything that is good, and that can be again.

“When you have sleepovers, Little League playoffs, first dates and other time-marking events, all enveloped in a cheesy, meaty haze, you can’t help but feel good about it, no matter how much it might suffer compared to other great pizzas. I had Shakey’s a lot as a kid. For a time, that thin style was my go-to because I didn’t know anything else. But once I moved here and started traveling, my eyes, tongue and stomach realized there was so much more to what great pizza could be. My favorite tour last year was with a couple from Toronto—a town that has like two decent pizza places, one Neapolitan, the other Detroit style—after they took our bus tour, the wife says to her husband, ‘I just realized how bad the pizza is that we’ve been eating all these years.’ Boom!”

You may have your own “Boom!” experience on Dolinsky’s pizza tours, which feature virus precautions. There’s more at pizzacityusa.com

It was fascinating to read that someone who claims to be an authority on pizza does not even mention the city of New Haven, CT, which is widely recognized as one of the world’s great pizza locations, with multiple entrants regularly appearing on list of the best pizzas in the country.