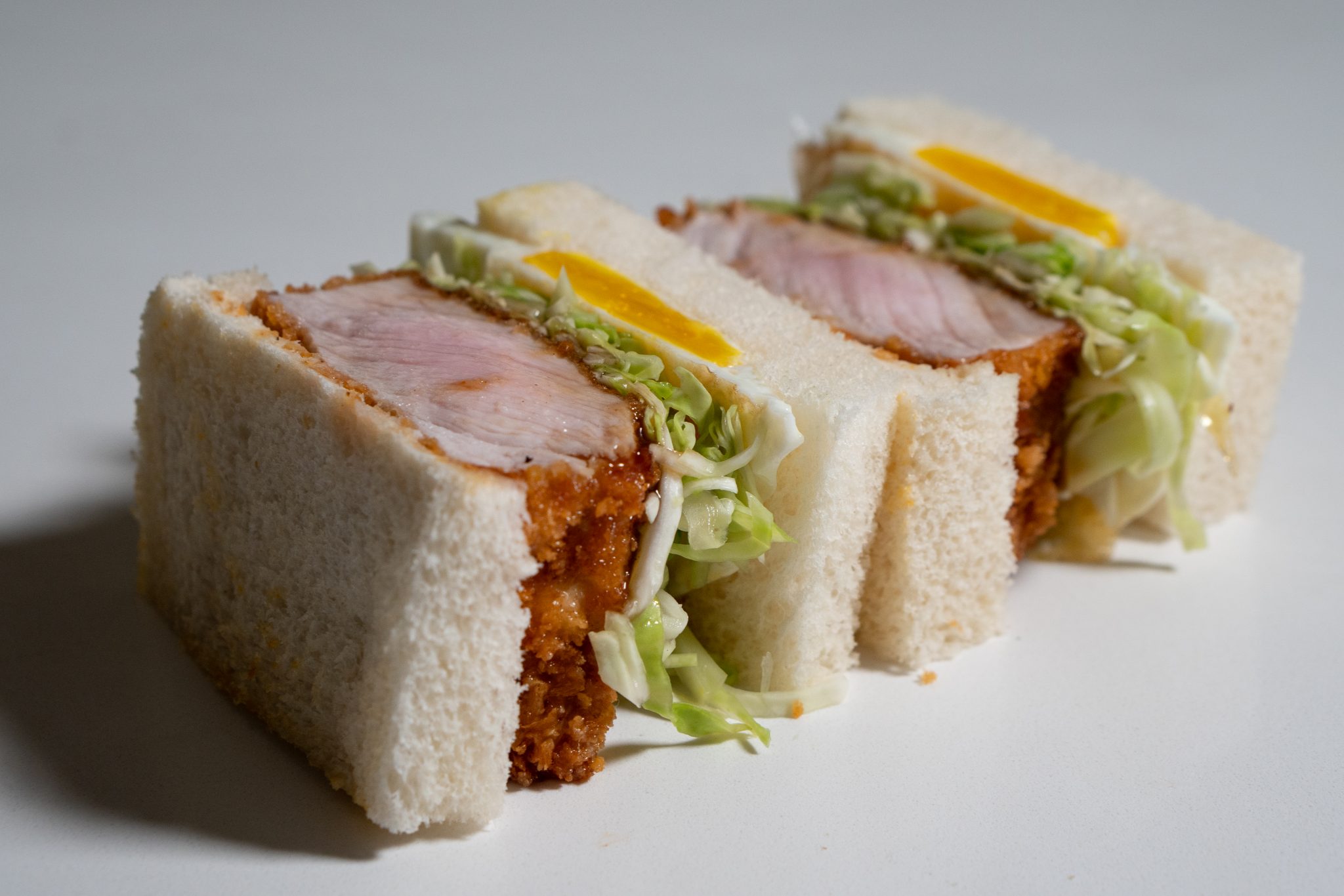 After a weeklong soft opening, Cat-Su Sando is open for business in a “cloud kitchen” headed up by chefs Shawn Clendening (Oriole, Saison, Birdsong, Blackbird) and Will Schlaeger (Next, Saison, Blackbird).

Signature items at Cat-Su Sando are sandos—sandwiches served between slices of light and airy milk bread, toasted and sliced down the center. We tried the Cat-Su Sando and Club, some skewers and okonomiyaki.

The namesake Cat-Su Sando is a breaded and fried pork cutlet (or tonkatsu), dressed with pickled bok choy, cat-su sauce and an egg, providing a hearty, layered bite of rich meat and egg balanced by the bok choy. Sweetness comes from the cat-su sauce, which plays well with the pork.

The Cat-Su Club is smoked turkey, provolone, shrettuce (shredded lettuce), bacon, tomato and sport —a tiny piece for a hint of heat. Spam is served on this sandwich two ways: in mustard-Spam ranch jam and crisped up in small slices, which is a good intro to Spam if you haven’t had it before.

For the gluten-averse, there are three skewers: chicken meatball, chicken thigh and zucchini. We had the meat skewers, and they were nicely seasoned with umami-rich dashi and tare, the primary seasoning in traditional ramen. The skewers are the simple and satisfying food you might order for yourself or your children: the flavors are pleasant and not challenging.

You may have had the okonomiyaki at places like Paul Virant’s Gaijin. The well-dressed Japanese pancake we ordered from Cat-Su was an intriguing mix of shrimp, egg, cashews and furikake, a sesame-seaweed blend. Presented in a small yet thick cardboard box, Cat-Su’s okonomiyaki was well-insulated for the ride home, although much traditional Japanese food is eaten at room temperature.

To drink, we enjoyed Royal Milk Tea—black tea with milk—a flowery, slightly sweet beverage, and a good complement to the food.

Having two chefs who’ve worked in Chicago’s finest restaurants guarantees high-quality everything: even the pickled elements and the BBQ shrimp-flavored chips are made in-house and believe me, you want them.

Cat-Su Sando is part of a growing trend of “cloud kitchens,” food service operations that work out of community workspaces and take online orders. The phone number for Cat-Su Sando is currently listed as 555-5555—the style of fake number used in Hollywood movies. Get it? You need to order online.

The cloud kitchen business model makes sense for entrepreneurs who,  wisely, are wary of investing in a brick-and-mortar place and prefer to start up their businesses with a restaurant that has no dining room and contact-free pickup and delivery.

There are pros and cons to the cloud kitchen business model. “We can build a brand and systems, and we have such an intimate space that food preparation becomes very focused,” Clendening says. “Plus, the seamless integration amongst third-party delivery platforms gives us a chance to reach a large group of people.” Alas, with this model, “when there isn’t a storefront, the customer loses that sense of place, and it can be hard to relate to a concept if you cannot physically interact with the space.” Still, given the state of the pandemic—and that some restaurants are boarded up—the cloud kitchen approach is a safe and sensible way to go. 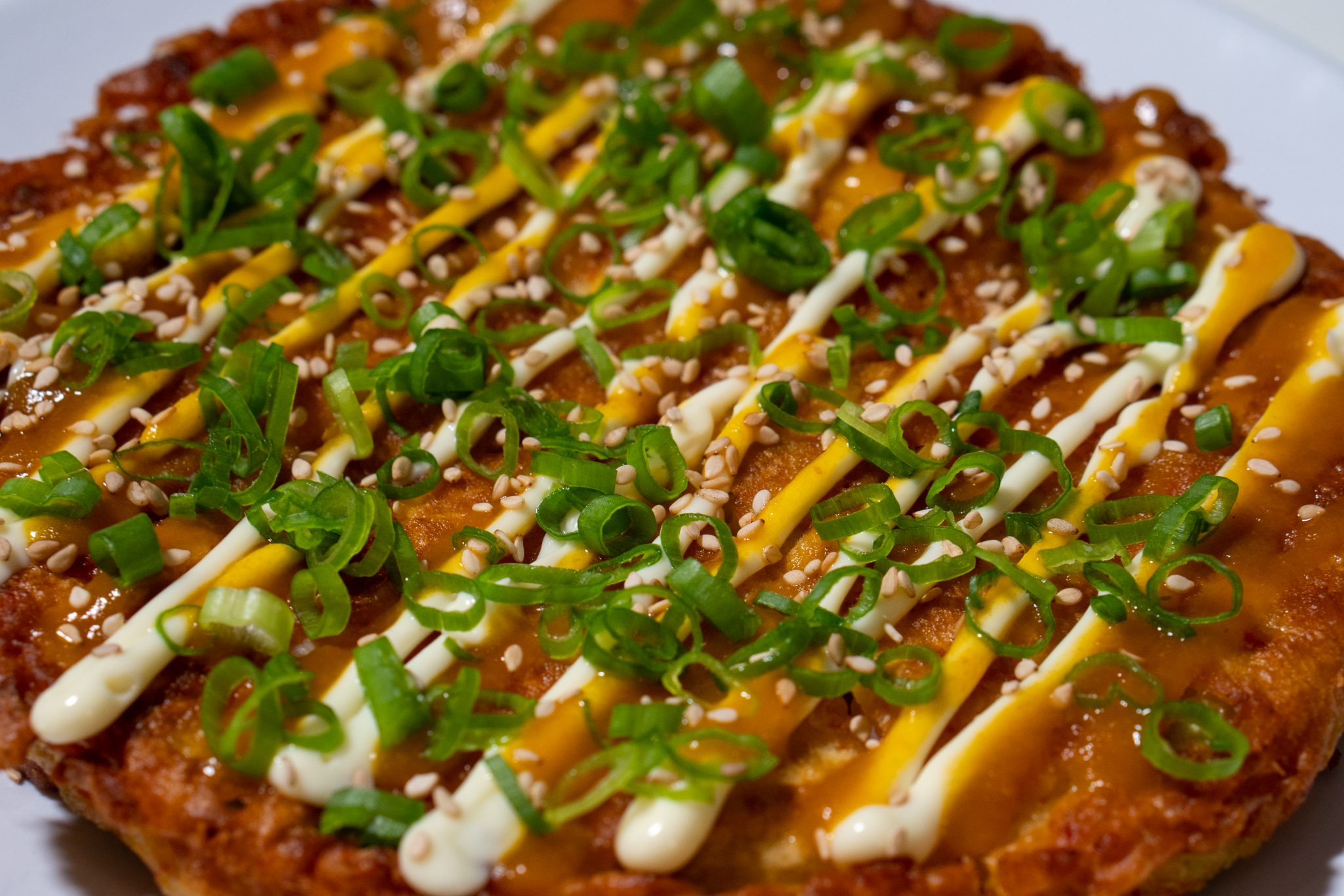 Akira Kurosawa, one of Japan’s most influential directosr, took heat from some of his fellow Japanese for being too “Western,” and his movies have indeed been both influenced by the West (his “Throne of Blood” is a “Macbeth”) and inspirational to the West (“Magnificent Seven” is a Westernized version of his “Seven Samurai”).

For centuries, many in Japan have been concerned about becoming too Westernized. During the Meiji Restoration (late nineteenth-early twentieth centuries), the eponymous Emperor declared Japan “open” to the West, and encouraged a corresponding openness to Western cuisine. Yoshoku, Westernized Japanese food, became popular. One of the premier preparations of this sub-genre was tonkatsu, and serving the deep-fried pork cutlet on two slices of bread was a further step toward the West.

During the Allied occupation of Japan, Spam found its way onto Japanese tables, and it fit right onto the Yoshoku American-Japanese fusion menu. Spam is a funny food, a Monty Python comic motif popular for fifty years, and there’s an undeniably playful element at Cat-Su Sando, which offers a “Dime Bag of Catnip” for your kitty as well as one of MSG because, you know, some people love MSG. Another menu item is listed a “Can o’ Spam,” and why not; conservas and tinned foods are trending. For Schlaeger, Spam is a touch of nostalgia from his earlier years, and Clendening adds, “Spam is tight!”

Cat-Su Sando’s logo is a maneki-neko, the beckoning cat you sees in Japanese novelty shops, with one arm up (the better to beckon); this cartoonish feline, which I was told looks like Schlaeger’s house cat, is believed to confer good luck upon the owner. Although Clendening and Schlaeger are approaching their cloud kitchen business with understandable caution, they, like all of us, will surely need a little luck to make it through the next few months… or perhaps years.

Great article for something I am sure to try….