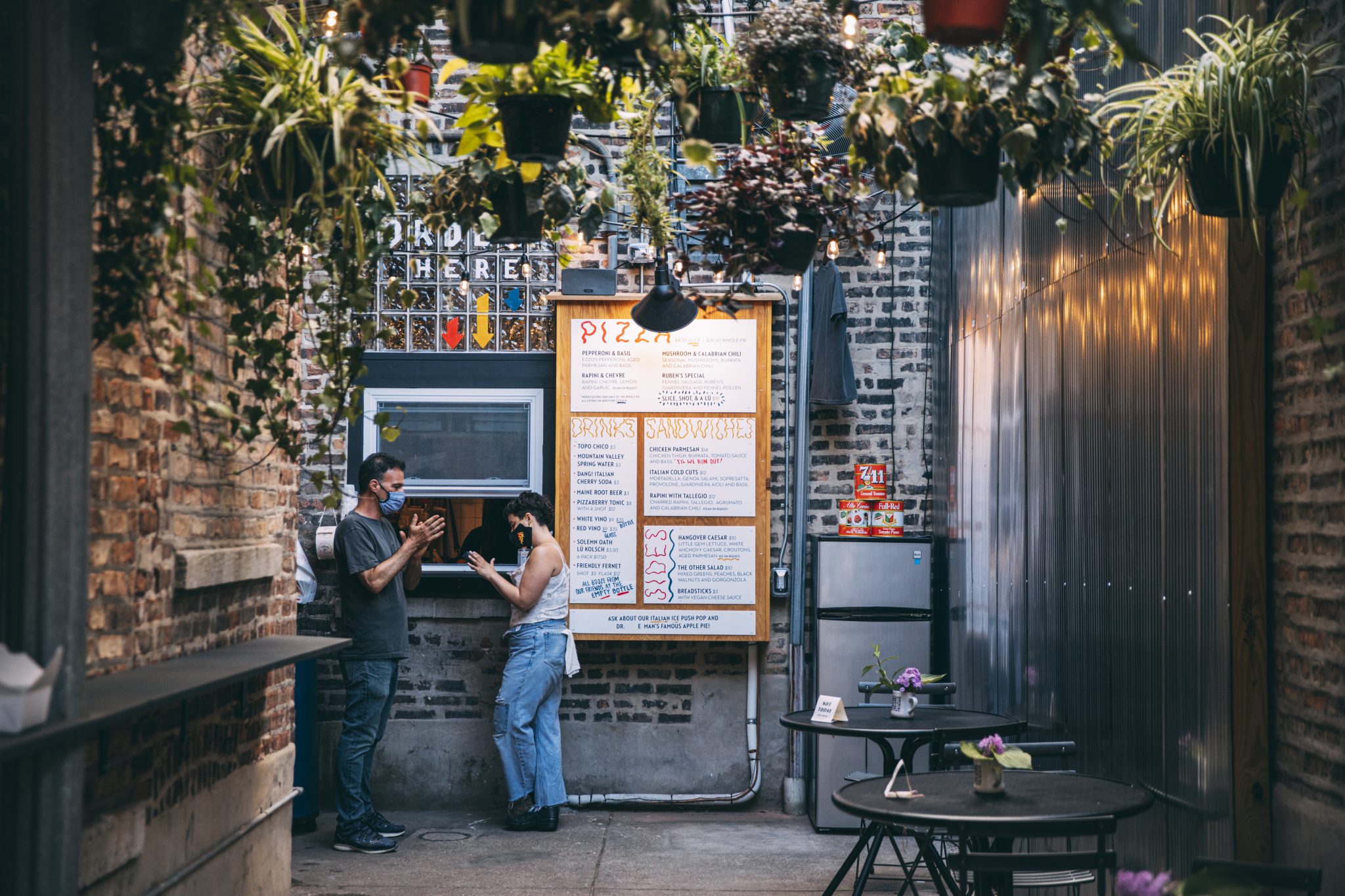 Sandoval is chef-owner at both Oriole, a Michelin two-star restaurant, and at the recently opened and highly regarded Kumiko and Kikko. Earlier this year, the team at Kumiko and Kikko placed at the top of Newcity’s Big Heat listing of Chicago chefs and bartenders.

Bruce Finkelman’s 16” on Center owns and operates several well-known Chicago bars and restaurants (including Longman & Eagle, Revival Food Hall and Dusek’s). In the 2018 Big Heat issue, 16″ on Center placed near the top of our listing of behind-the-scenes influencers of Chicago restaurant culture.

Finkelman has operated Empty Bottle for decades, and the adjacent Bite restaurant served many patrons of this renowned music club as well as neighborhood folks who stopped in for dinner. Then: the pandemic. “As I started looking at the changes in the business climate, especially for the hospitality market, and how long this thing might last,” Finkelman says, “it seemed like the day of the restaurant that needs twelve people to run it was going to be difficult to sustain, especially with a small restaurant like Bite. That kind of dining experience wasn’t going to happen again until live music started coming back and that looks like March of next year. My first text message was to Noah and I said, ‘Hey man, let’s do something.’”

Sandoval, too, saw where the industry was trending. “Obviously, Oriole had to close,” he says, “just like everything else. We had a relatively large staff in a relatively small space, and it seemed like the right thing to do. I’d always wanted to work directly with Bruce because we have similar interests and we’re both crazy about trying to be perfect. A lot of people were out of work and about to lose their $600 [weekly unemployment] bonus, and we reached out to a lot of our employees and were able to bring many of them into the Bite space.”

Pizza Friendly Pizza now operates in the Bite space, serving slices and whole pies through a carryout window. It seems like the right pivot for this historical moment, when people are hesitant to eat inside and a smaller staff requires a product that can be produced with maximum efficiency and a small, focused menu. Pizza Friendly Pizza serves four kinds of Sicilian pizza, each prepared with Sandoval’s knack for creatively combining high-quality ingredients; salads; a few sandwiches—we especially like the Italian-cold-cuts sandwich; and drinks, including a zero-proof cocktail from Julia Momose who worked with Sandoval at Oriole.

“Pizza-making is very efficient,” explains Finkelman. “We run with one-half or one-third of the people we had at Bite. And it will continue to get more efficient as we get better at it.”

“Social distancing is also very important,” says Sandoval, “and if we tried to put twelve to fifteen people in that space, it would be super uncomfortable. We’ve set it up now so that everyone is six feet apart all the time. We have a person who comes to work in the morning to make the dough, then I go in early to parbake the pizza [dough], and we talk to each other, but it’s through a window. Then I’m done before the head chef gets there, and he’s there for two hours before anyone else gets in. Everything is so organized: there are specific places to be, and they’re all far apart.”

One of the challenges of making Sicilian pizza at Pizza Friendly Pizza is that the dough has to ferment for many days before it can be used. “Bruce didn’t build Bite to be a pizza shop with 450 doughs in the walk-in for five days. We had to use a Sawzall a bunch of times [to reconfigure the walk-in].”

“It was very much a DIY endeavor,” Finkelman adds. 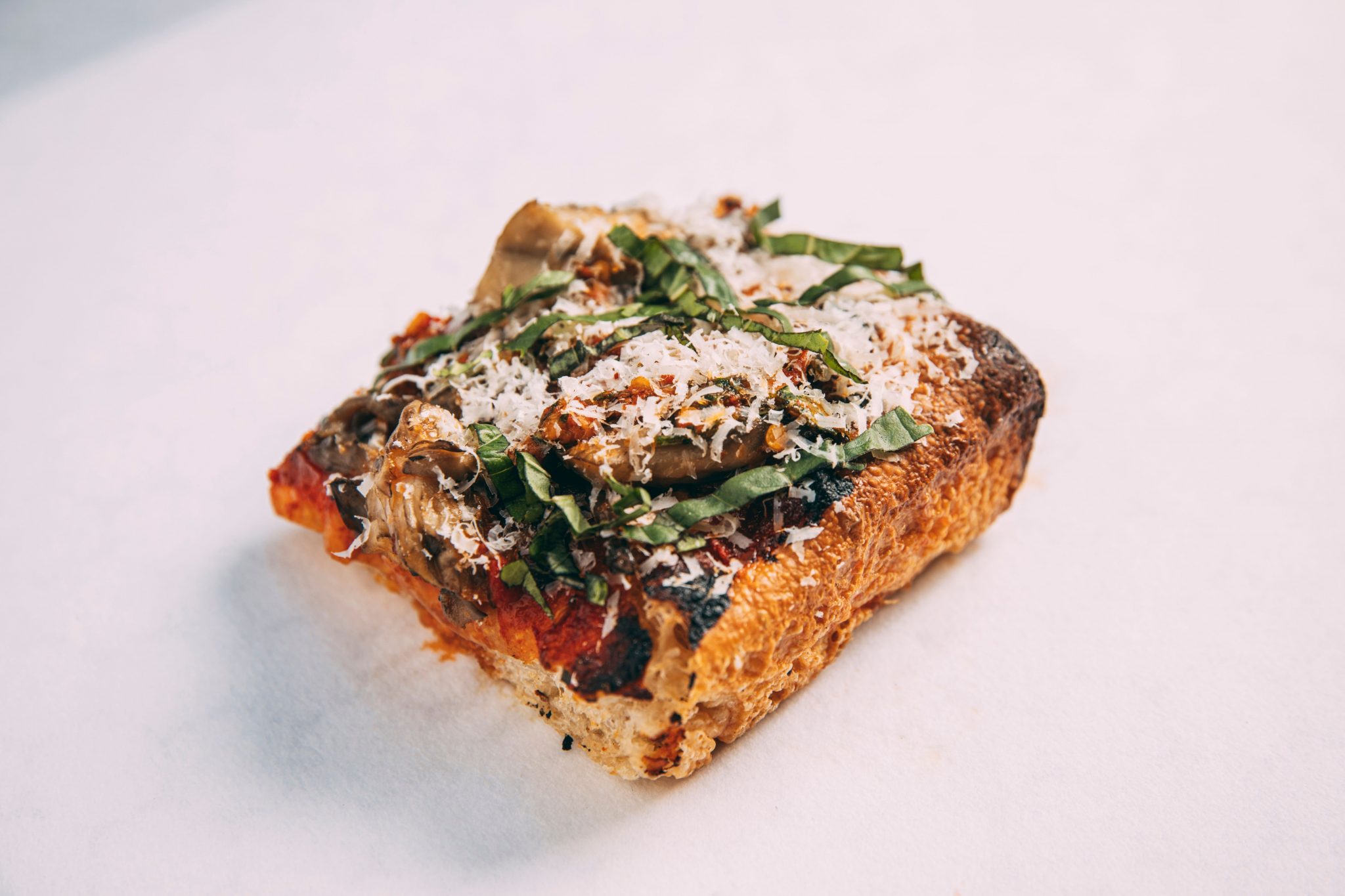 Was the decision to make Sicilian pizza, a lesser-known variety of pie, driven by market considerations? Sandoval corrects us, “I have kind of a weird thing about ‘the market.’ I do what I want and don’t worry what other people are doing. If I start worrying about that stuff, I’d go crazy. If I have a new dish I want to do at Oriole, I Google it and if someone else is doing it or no one else is doing it, I don’t care. I’d never done pizza before, and I decided that I was going to make the best pizza I could, and it seemed like it should be square cut, in a sheet pan, built for efficiency because I knew we would be busy, and I couldn’t be tossing dough to order. So, I started researching Sicilian pizza and I decided that was something I really liked.”

As many younger Chicagoans do not have cars, and public transit is being avoided, we wondered if Finkelman was assuming most of the business for Pizza Friendly Pizza would be local diners. “Empty Bottle has been open for thirty years,” says Finkelman, “and it’s always been a neighborhood place. Though it’s had international acclaim, it’s always been a neighborhood place. We’re focused on the community and being a neighborhood restaurant, a beacon for the community. Noah and I felt very strongly that the community focus should carry on with Pizza Friendly Pizza. We’re so proud when people come from farther away, but we’re a part of Ukrainian Village, that’s where we reside, and to see people come by with their dogs, or just stopping in if they happen to be walking by, that’s what it’s all about: serving that neighborhood.”