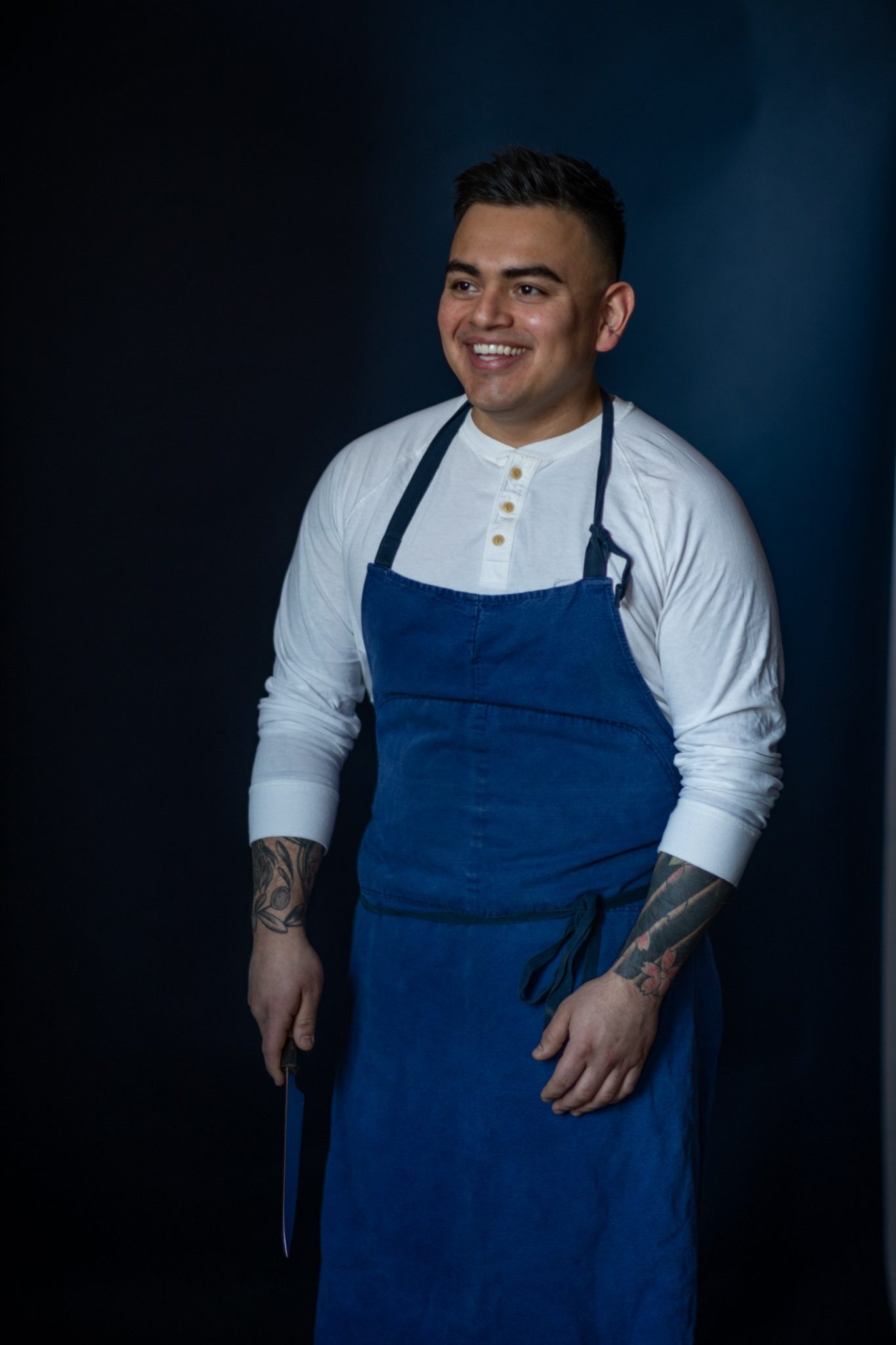 Jonathan Zaragoza’s family owns and operates the popular and critically acclaimed Birrieria Zaragoza (4852 South Pulaski), turning out some of the best goat birria you are likely ever to gobble. Birrieria Zaragoza garnered a James Beard nomination and Michelin Bib Gourmand recognition last year. This month, Zaragoza will inaugurate a residency —El Oso—at The Promontory (5311 South Lake Park), where he expects to do a lot with their wood-burning hearth, and little of it will be about goat. El Oso—“the bear”—comes from the nickname his father gave him.

“There’s something nostalgic and romantic for me about cooking with wood,” says Zaragoza. “We used to run an underground restaurant in our backyard on Saturdays and Sundays, and we would serve just birria. My job on Fridays was to go to the South Water Street Market—my dad used to let me drive, I was this teenager—and I’d go pick up wood and pencas de maguey [the spiny parts of the agave plant]. Then I’d start the fire and by 8pm, it had to be super-hot. The goat would go in at midnight, and then I’d have to get up at 6am to take the goat out.”

Cooking over an open fire was among Zaragoza’s first cooking experiences, and it made a lasting impression. “Cooking on wood requires you to be present,” Zaragoza says, “so for someone like me who is so easily distracted, wood cooking keeps me focused.”

The Zaragozas are known for their outstanding goat birria prepared Jalisco-style. At The Promontory, Zaragoza will prepare dishes that come from several regions of Mexico.

Sikil pak is a Yucatecan dip made with pumpkin seeds. For this dish, Zaragoza says, “We roast everything over the hearth, which gives it a more Mexican flavor; It’s the way they do it in Yucatan. Our recipe is basically pumpkin seeds, olive oil, tomato, onion, garlic, habanero, cilantro and orange and lime juice. In traditional Yucatecan food, they’d use naranja agria [sour orange marinade], but we get the same flavor from orange and lime juice mixed together. We serve crudites, carrots and so on, to dip into the sikil pak.”

“Tetela de Cangrejo,” says Zaragoza, “is like a Mexican crab Rangoon, made of triangular masa. We take the lump crab and mix it in with requeson [a ricotta], add a little microplaned garlic to pop up the flavor notes, hot sauce, and then cream cheese for body. The roasted peanut salsa was an accident: I was doing a tasting, and I dropped the salsa and it spilled all over the floor. I had the macha [a salsa of peanuts, garlic and chilies in oil], which we’re serving on the ceviche, and to that I added some maguey sap that I got from Rare Tea Cellars, and water. I pureed it all with Mexican peanuts that I’d roasted over the fire. It turned out incredibly good.”

Enmoladas is a kind of enchilada; just as enchilada means “in chili,” enmoladas means “in mole,” and there are several moles on Zaragoza’s menu. He explains “Whenever I go to Oaxaca, I get the enmoladas Oaxaquenas. In Oaxaca, they make it by putting a large tortilla on the coma [flat griddle]l. We add mole amarillo, queso Oaxaqueno and cilantro. Then we add squash, fold the tortilla, and cook it, like a quesadilla. I love, love, love this combination of mole amarillo with masa. You can put anything you want into an enmolada; choose your own adventure.”

At The Promontory pop-up, Zaragoza will also serve chicharron de Puerco, crisp pork belly roulade with mole manchamanteles, a mole made with fruits like pineapple, Bosc pears, plantain and tomatoes.  “Fruit and pork are made for each other,” says Zaragoza. “In mole manchamanteles, pears and pineapple pair perfectly with the crisp, salty pork.”

For elotitos, or “little corn,” Zaragoza says he uses “Three Sisters stoneground white grits, cooked polenta style in a pan, finished with cheese. Then we portion it out and fry it so that the inside is creamy, and the outside is crisp, like a deep-fried tamale. That’s put over a pipián verde, a mole made of pumpkin seeds; then we add baby corn and squash that we’ve roasted in the hearth. We finish it with cotija cheese.”

If you’ve made pilgrimages to Birrieria Zaragoza because you enjoy their goat, stop by The Promontory to see what Jonathan Zaragoza can do when he’s free to make whatever he pleases on the wood-fired hearth. You’ll taste Zaragoza dishes you’ve never sampled before, but you’ll likely want to have again and again.