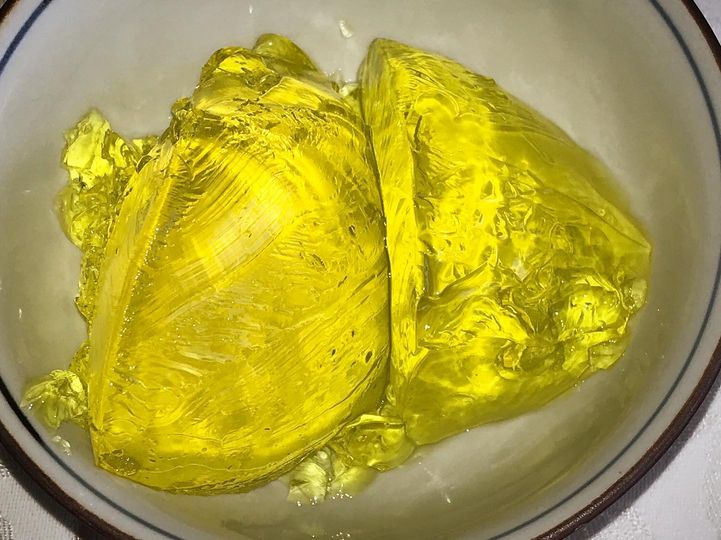 Years ago, my favorite restaurant was Horwath’s, a supper club in Elmwood Park, and I went there several times a month. For the appetizer, I’d order the Jell-O with Melba Sauce, a throwback rarity not found on many twenty-first-century menus. Horwath’s is long gone but if you’re in the mood for Jell-O either before or after dinner, your best bet is at Polish restaurants, like Jolly Inn on Irving Park. Alas, as many times the jello was served in little glass goblets as part of the buffet, such styles of dining are disappearing as the pandemic makes such communal dining seem risky.

For the past few weeks, I’ve been eating four cups of the stuff every day. Whenever I mention this food fetish to family and friends, I get an eyeroll and a look that says, “You’re kidding, right?” No, I’m not. I like jello, it’s super low cal, and a cool thing to eat on a hot night.

Because I am so fond of the stuff, I was thrilled to see photos of the gelatin-based creations being turned out by Ken Albala, author (of over two dozen books) and food historian/professor at the University of the Pacific. Albala has a book (University of Illinois, 2021) coming out about jello (small J, no hyphen, to distinguish it from the name brand). Albala has been developing some stunning jello creations, so I called him up to get his insights into this miraculous, though much maligned, foodstuff.

Jello is a kind of jokey food, usually presented in super-bright colors, transparent and jiggly. It is, in short, a food that no one seems to take very seriously, though it is not uncommon to see gelatin (usually from agar or carrageenan) at higher-end places like Alinea, Chicago’s only Michelin three-star. One source of gelatin for molecular gastronomists at the higher end of the food industry is Modernist Pantry [modernistpantry.com], which boasts they “have everything you need to make culinary magic happen in your kitchen.”

But you don’t need to be a Michelin chef to make the cool gelatin creations like Albala’s. “Ninety-five percent of my recipes use Knox gelatin,” says Albala, “because it’s standard, and the measurements are standard. Thing is, it’s made by the same company, Kraft, that makes Jell-O, so it all comes out of the same factory. Still, I’d rather use unflavored Knox gelatin than that pre-flavored, artificially colored Jell-O.”

So, you can make some awesome dishes with jello, but it’s still going to be a hard sell for some folks because jello is kind of, you know, hard to take seriously. Though both Albala and I consider jello a viable foodstuff, Albala admits that his experimentation with, and writings about, jello are all “slightly tongue-in-cheek, because what I’m doing is partly scary, partly humorous and partly serious. I’ve tried to ride that line. People don’t really know if I’m serious or joking or really trying to create art. People will say ‘that sounds gross,’ but they’ll taste it anyway.”

Albala explains that “jello is a food that has been disparaged over the last thirty years or so, and that’s not a new thing. Jello has gone in and out of fashion very dramatically since the late Middle Ages.” During the medieval period, Albala says, “people used to like bright colorful surprises at the table.” (Think four and twenty blackbirds baked in a pie.) “And it was the same thing in the fifties when people enjoyed bright, modern flavors and wanted something really unusual,” though in the “past twenty years or so, people have tended to prefer food that is homey, simple and local. That’s not jello, which is modern and technologically driven and you don’t really know how it works. Jello, sometimes in the form of aspics, was very fashionable in the late nineteenth century, and there are hundreds of recipes for gelatin salads containing fruits and vegetables and meat. The classic is Perfection Salad,” a jello loaf with lemon vinaigrette and chopped vegetables, “which was a starter.”

“People always think I’m being ironic,” says Albala, “and they say, ‘Oh, you’re doing like a retro jello salad mold,’ but no, I’m not doing that at all.”

Some samples of Albala’s creations include Sauvignon Blanc Jello-Stuffed Pasta Shells, Finger Lime, on Smashed Blackberries with a Smudge of Chevre, as well as Poke Salad of Cod and Mango Set with Rum Jello and Shichimi Togarashi in a Cannoli Tube. At the end of this article, you will find a recipe for his Cooked Peach and Candied Walnut in Gin Jello, which I’d be glad to see set in front of me.

Albala’s creations are cool to look at, and they frequently pack a mild buzz. “I put alcohol in almost all of them,” says Albala, “which are jello shots, pretty much. Sometimes I use wine, for flavor. What I’m doing is combining, for instance, a fancy appetizer with a cocktail, so they could function as an appetizer or a dessert. I probably wouldn’t have something like that for a main meal.”

In what may be a sign of the return of comforting jello—if not Jell-O—during these difficult times, our local Jewel has been out of Knox gelatin packages for going on a month. Perhaps, like Albala, others are re-discovering this sometimes beloved, sometimes disdained food. 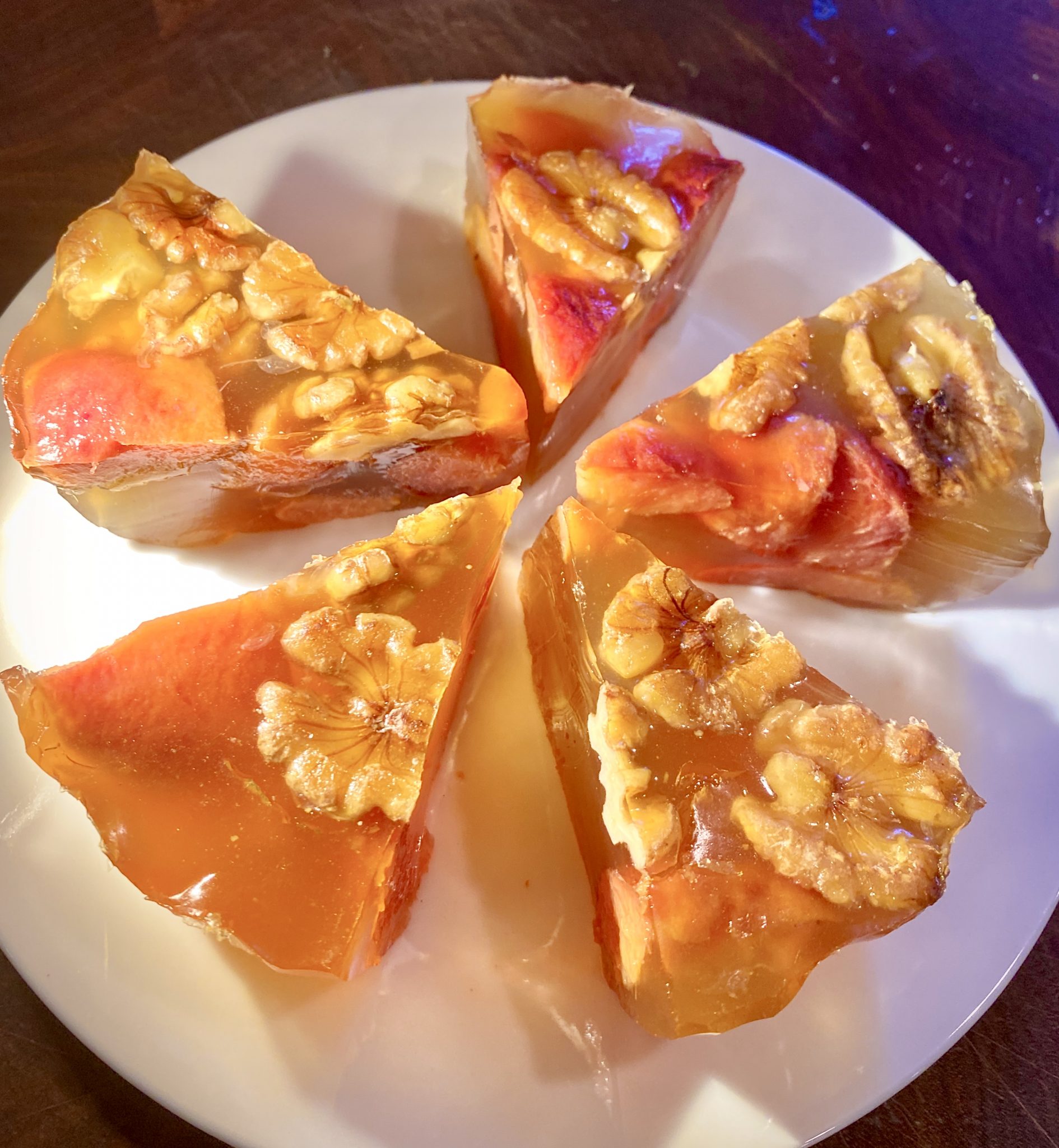 When the peaches you bought at the market are overripe, remove the pits and slice them skin and all, put them in a nonstick pan and toss on sugar and maybe a little vanilla extract. Gently cook them, so the juice reduces slowly until the peaches are thick; then place everything in a jar. The quantity you make is of course entirely dependent upon whatever you have on hand. Or proceed with this recipe using a commercial whole fruit preserve. The charm I think is using a fluted mold that makes the slices look like pie—this was a plastic container from an order of takeout chow mein.

In a nonstick pan, place the walnuts, sugar, cinnamon and salt. Heat on low until the sugar melts, then stir to coat the nuts. Don’t touch them, but put aside on a plate to cool. Put the peach preserve and walnuts in a mold. Put the water on the stove to boil and combine all the other ingredients to let the gelatin bloom. Then add the boiling water and pour into the mold. Let set in the refrigerator. Slice into wedges and serve, perhaps with ice cream.