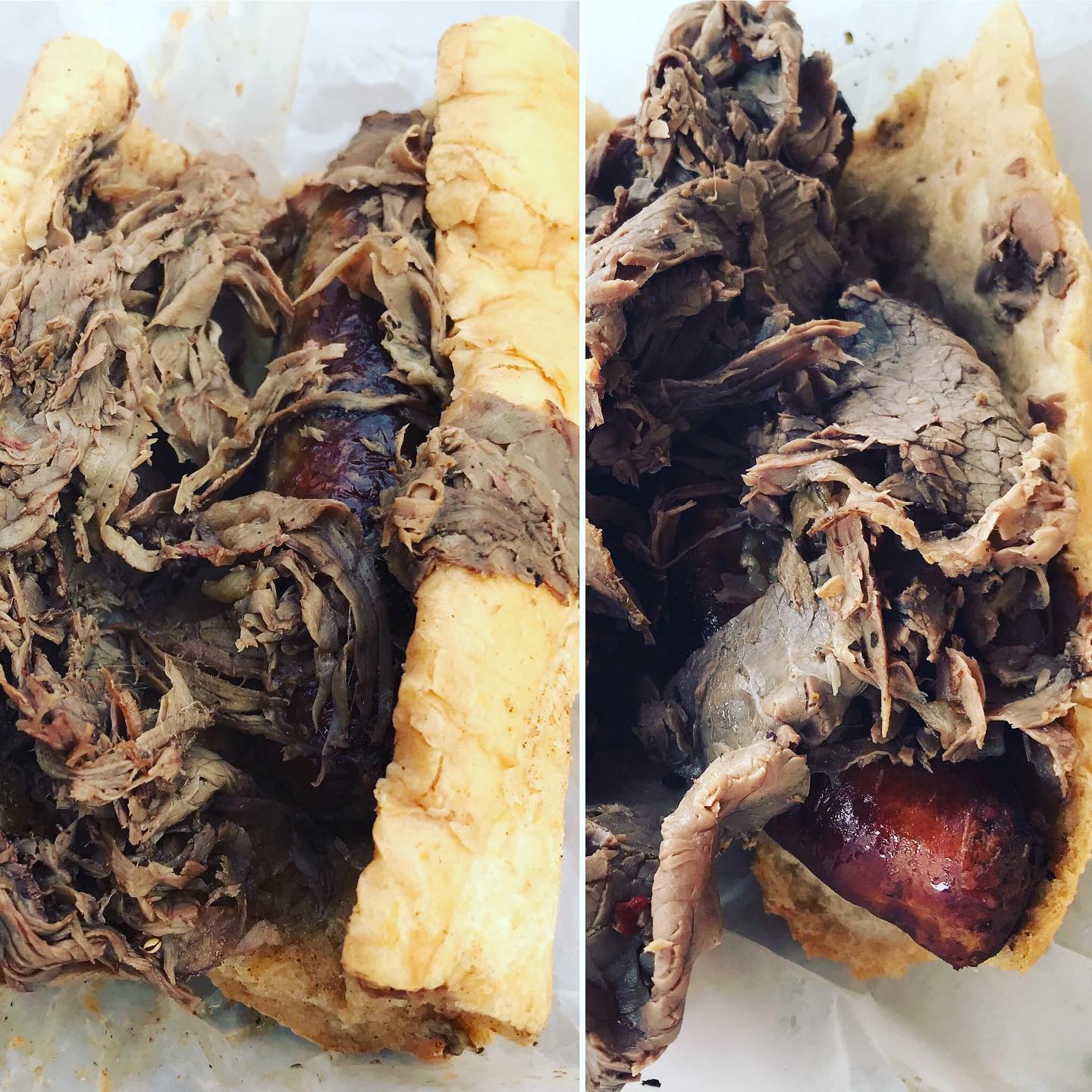 Italian beef and sausage combos, Al’s on the left and Johnnie’s on the right/Photo: David Hammond

Through this coming Saturday, October 17, Al’s #1 Italian Beef on Taylor will be serving a special combination sandwich of chicken andouille sausage from Erick Williams  of Virtue tucked inside a regular Al’s Italian beef sandwich. This three-day event, produced by the Resy reservation service, was promoted as a “remix” of Chicago classic flavors.

For years, Williams ran County Barbecue, right down Taylor Street from Al’s, and he confessed “I used to eat Al’s beef two times a week. I would make a deal with my guys that if they’d go get me a beef for lunch, I’d buy a beef for them. I’ve eaten Al’s hundreds of times.”

Williams and I were chatting inside Al’s as I waited for my combo to be ready. Seated in the Al’s dining area was Chris Pacelli, Jr., whose family started Al’s. Pacelli had filled me in on the origin of Al’s : “You got to remember Italians, in the thirties, late twenties, there were all kinds of gamblers, half-assed Mafia guys and stuff. My uncle Al was involved in all that, a gambler, dis dat. Well, he gets in trouble, has to go to jail, comes out of jail and starts driving a truck. A friend says, ‘let’s open up a bookie place.’ So, my uncle says, ‘Why don’t I do beef sandwiches, and I’ll sell them as a front.’ There was like five guys. They didn’t have gas or nothing in those days, so everything was charcoal. First name for this idea was ‘Al’s Barbecue.’ All these beef stands started because of my uncle. They were gamblers, and they saw him making money, cash money, and they figured that’s an easy way to make money and still gamble. They needed a source of money; instead of stealing, they sold beef.”

We’re a big fan of Al’s, and on any list of Italian beef joints in Chicago, the first-place position usually goes either to Al’s or Johnnie’s Italian Beef in Elmwood Park, which we also visit quite frequently. So, we did back-to-back tastings of combos at both places.

In the photos above, Al’s special-edition beef sandwich outfitted with Williams’ sausage is on the left and a standard-issue Johnnie’s is on the right. The size of both sandwiches is about the same and the buns and actual meat are virtually identical.

We’ve always been partial to the jus served with Al’s Beef, and we still prefer that oregano-forward version over what’s served at Johnnie’s, though the giardiniera at Johnnie’s has lots more personality and dimension provided by the olives and hot peppers. Al’s giardiniera is celery-heavy and milder.

Williams’ sausage is much more dialed down in spicing than the sausage at Johnnie’s, and this less aggressive flavor profile has the advantage of making this special combo at Al’s more balanced: you can actually taste both the sausage and the beef in every bite; I would attribute this orchestration of flavors to be a reflection of Williams’ fine-dining experience at places like the now-closed MK and now at Virtue. Johnnie’s sausage has more crispness from the flames of the lump charcoal grill, which we like, and it’s a lot spicier and saltier. The Johnnie’s sausage is good, but it tends to dominate the sandwich, and though I’ve had the sausage at Johnnie’s dozens of times, I hadn’t noticed until this comparison how powerfully it overwhelms the beef. That’s one of the big advantages of a side-by-side comparison: characteristics of each sandwich become clearer by comparison.

The Williams/Al’s version of the combo is a better constructed sandwich, with tastes that mesh seamlessly, but the Johnnie’s version of the combo has the advantage of being a gigantic fistful of flavor, so your preference is going to depend on whether you appreciate subtlety in your combo or crave a big mouthful of spice and meat. Honestly, my preference could change by the day, but if you want to try the Williams-Al’s version, just to see an accomplished chef’s take on this sandwich, you have until Saturday.