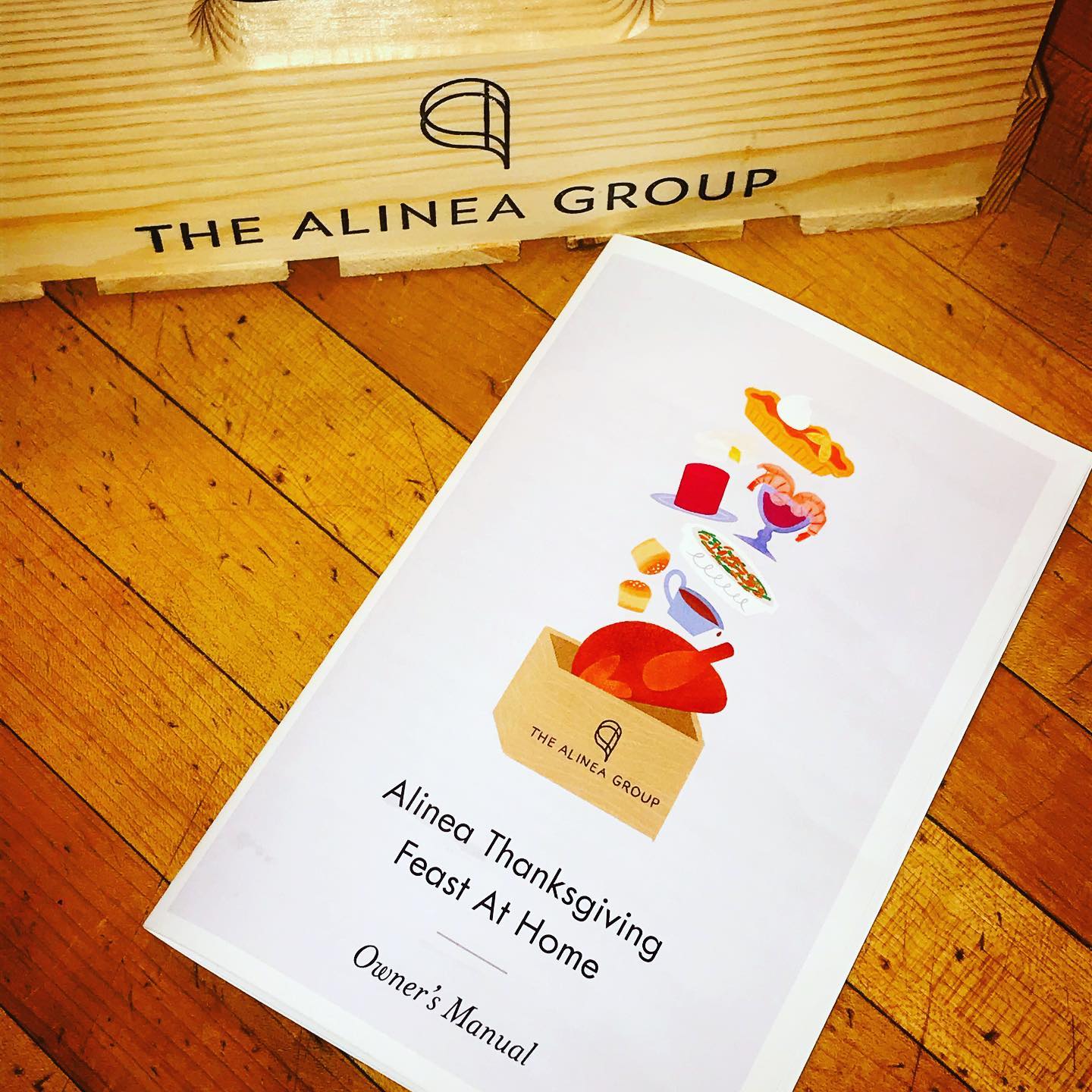 Many Facebook friends—chefs and food enthusiasts alike—said “Screw the turkey” this year while going rogue and preparing big cuts of beef or beautifully dressed fish for their Thanksgiving meal. Put aside fond childhood memories and our historic allegiance to the Puritan menu and the uniformly white turkey, mashed potatoes and stuffing seem—particularly in an era of culinary adventurousness—boring.

Thanksgiving food is a ritualized drag, a pro forma trotting out of tired appetizers, sleepy sides and a main course that may comfort but fails to wow. When we heard that Alinea was planning to send out full dinner packages of Thanksgiving food, we perked up: maybe they could do something different.

But, no, they didn’t do anything different. But what Alinea did for Thanksgiving dinner was perfect, with standard-setting versions of the pedestrian food we’ve grown to feel is part of the holiday and our patrimony.

Alinea prepared and expertly packaged the standard—dare we say archetypal?—Thanksgiving feast, with few surprises beyond it being fantastically good, showing that in the hands of a master and his kitchen, even the normal becomes abnormally good and standard dishes are done so well that they set a baseline for all versions to come.

Every year we set an antipasti table, in honor of the Italian Renaissance adventurer who first connected the Old World with the New World, featuring Italian cheese, sausage and peppers. The main attraction is our shrimp platter, the well-prepared crustacean and a highly horseradish-y cocktail sauce… which is just what Grant Achatz and his crew sent along for our pandemic holiday feast. I’m not sure, in a blind tasting, if you could distinguish Alinea’s shrimp and cocktail sauce from our own. But after that opening salvo, the differences between our traditional meal and the Alinea version diverged dramatically.

We usually serve cheese, but Alinea included a baked brie en croute with a spectacularly simple caramelized onion and pear chutney, which bumped up the luxuriousness with a spicy sweetness that made me want to keep eating the cheese on the provided walnut bread, before I had to stop to save room.

The green bean casserole was the best version ever of this standard of the Thanksgiving table, just the beans in a creamy sauce, with slivered almonds, sent out in a metallic carry-out container that went right into the oven and came out the very best version of this dish in memory, the beans fully cooked yet slightly crunchy, slivered almonds complementing with deep flavor and texture. We ate the leftovers all weekend.

When we examined the container of creamy mashed potatoes, right out of the shipping box, the spuds seemed liquified. Was there some mistake? No, the potatoes were swimming in cream, which when we cooked them according to the instructions, were rich, sure, but the potato flavor punched through, an earthy complement to the lush creaminess. 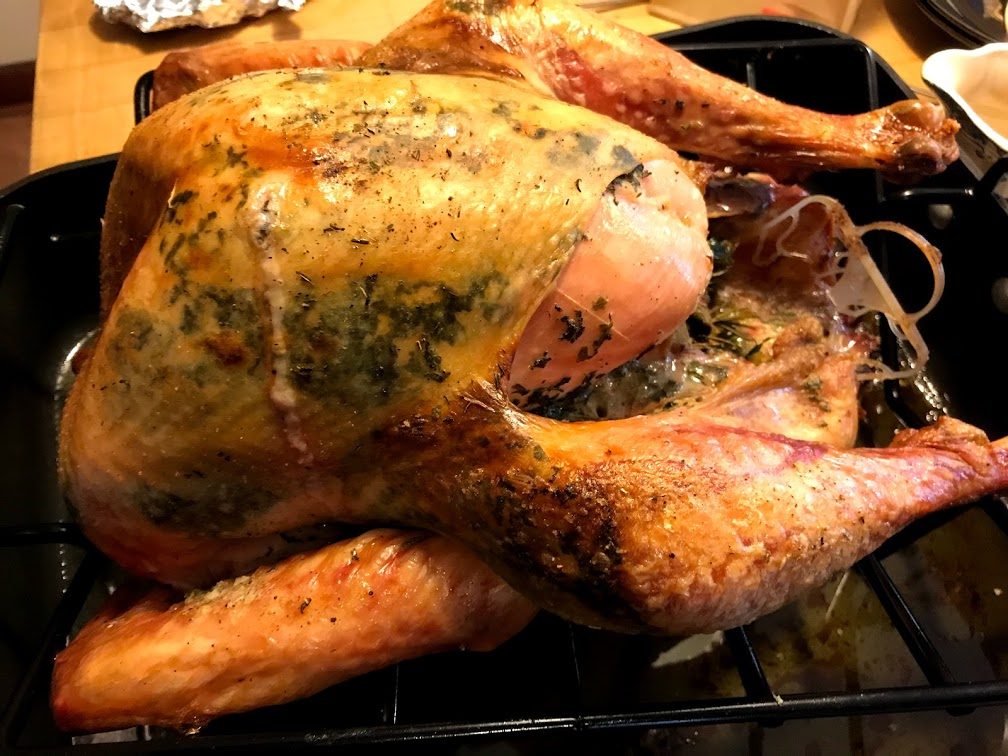 There was a salad and other sides, but the standout was, as it should be, the turkey, a ten-pounder from D’Artagnan, cooked and served in accord with Alinea’s sixteen-page Owner’s Manual. This highly detailed guide, full of suggestions that we will use in future meals, delineated that “We will be roasting the turkey in a 200°F oven until a temperature probe inserted into the breast of the turkey registers 160°F-165°F. This process can take approximately (approximately, approximately, approximately—we can’t overstate this) 35 minutes per pound.”

Two hundred degrees is way low for a turkey, and Achatz provided the further direction that, before the bird went in the oven, we were to place two moist towels over the breast of the turkey. These towels were to be removed during the last hour or so of the cook, so as to brown the breast. The moist layer of towels slowed the heat from entering the breast, which allowed the legs and thighs to cook more completely without the breast drying out while we waited for the dark meat to cook through. The process is described by Achatz in the accompanying video.

The result was one of the best turkeys in memory, although credit must be given equally to the good folks at D’Artagnan, as well as to about a pound of herbed compound butter that Achatz instructed to insert between turkey skin and meat, herbal salt, and the bunch of herbs that went into the cavity before cooking. The result was a deeply aromatic fowl, with dark meat that was more pink than light brown, moist and full of deliciousness. 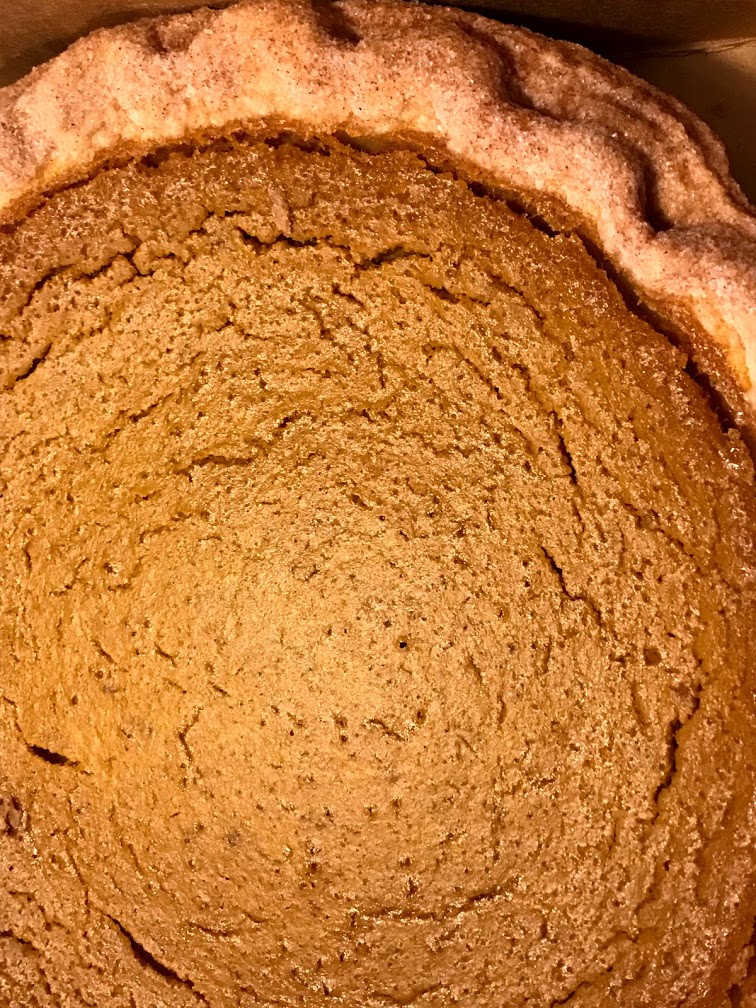 Pumpkin pie I was pleased to eat/Photo: David Hammond

Though I avoid pumpkin pie, which reminds one of that which should never be eaten, this pumpkin pie, which reflected those served at Achatz Handmade Pie Company, was superb, almost a mousse of the squash in a crisp and flaky crust that caused me to rethink my abhorrence of the Thanksgiving must-have pie, just as the meal made me rethink my previous disregard for Thanksgiving’s other signature foods.

There’s no reason why the food of the Thanksgiving holiday cannot be awesome; all it takes is expert sourcing and a detailed guidebook full of sage direction from one of the world’s great chefs. It’s that easy, and it was a tremendous value. The entire meal cost around $400, but it fed four of us for the big day and for days after, which seems a modest price for the best Thanksgiving food many of us had ever had. If Alinea offers a Christmas dinner, we’ll be signing up for that, too.