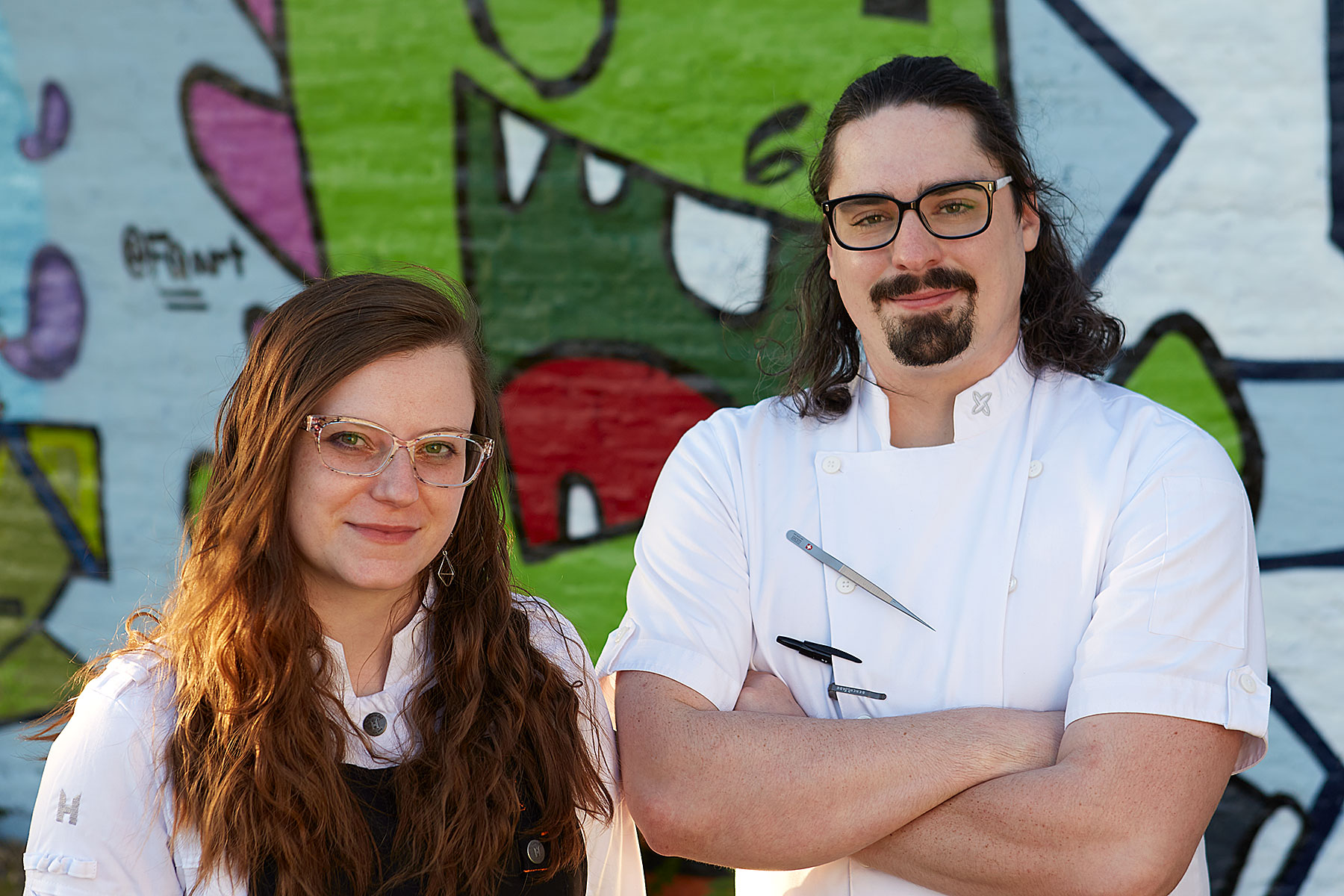 Biting into Nashville’s signature hot chicken sandwich a few years ago, I realized it was the biggest mistake I’d made in a long time. Dinner that night was at Hattie B’s, one of the more popular tourist destinations in Music City, and the sandwich I’d ordered was called “Shut the Cluck Up,” the most incendiary of the spot’s hot chicken sandwiches.

If you’ve ever subjected your palate to a chip full of insanely hot commercial salsa, or a microscopic sliver of a Carolina Reaper chili pepper (as I once insanely did), you know the feeling of a capsaicin overdose: increased heartbeat, dizziness, hallucinations (stars) and clammy skin, a symptom of shock. After that one bite of Hattie B’s super-hot chicken sandwich, I needed some alone time in the parking lot, which I spent wondering why in the name of all that’s tasty I ever put that in my mouth.

When Harold McGee, food scientist and author of the classic “Of Food and Cooking,”visited Chicago, I asked why he thought people like the younger me subjected themselves to food that was so hot it feels like it could kill you. McGee explained the phenomenon of “constrained risk, which is when it seems like you’re going to die but you know you probably won’t. It’s exciting. Think roller coaster.”

I’m not into roller coasters anymore, either, so when I ordered a hot chicken sandwich from Cluck- It—a ghost kitchen on South Wabash that opened last month—we went with the moderately spiced chicken. And a good piece of chicken it was, thick and moist thigh meat, with some beautiful pickles, sauce and a ladle of coleslaw on a brioche bun. This is the kind of comfort food that many of us crave and that’s served at Fry the Coop, The Budlong Hot Chicken and other Chicago-area places, many of which are thriving.

As with slice joints like Pizza Friendly Pizza and sandwich shops like Cat Su Sando, Cluck-It! was opened by two chefs who’ve time in Chicago Michelin-starred kitchens. Cainan Edwards is formerly of Alinea and Momotaro, and spouse Samantha Zubli was pastry sous chef at Blackbird.

The hot chicken sandwich is said to have been born in the Nashville area at Prince’s Hot Chicken. Local legend has it that sometime in the 1930s, Thornton Prince came home after catting about; his girlfriend, feeling scorned, decided to punish him with fried chicken vigorously seasoned with chili heat. The punishment backfired because Prince liked what he was eating. He liked it so much, in fact, that he was inspired to open the hot chicken restaurant that bears his family name.

It’s remarkable that anyone could claim—with a straight face—that they invented a fried chicken sandwich with chili-hot seasoning. Chicago’s Vesuvio Restaurant claimed they invented chicken Vesuvio—a simple creation of the bird, garlic, oregano and potatoes—so it’s anyone’s game to plant a flag on food and see who salutes. 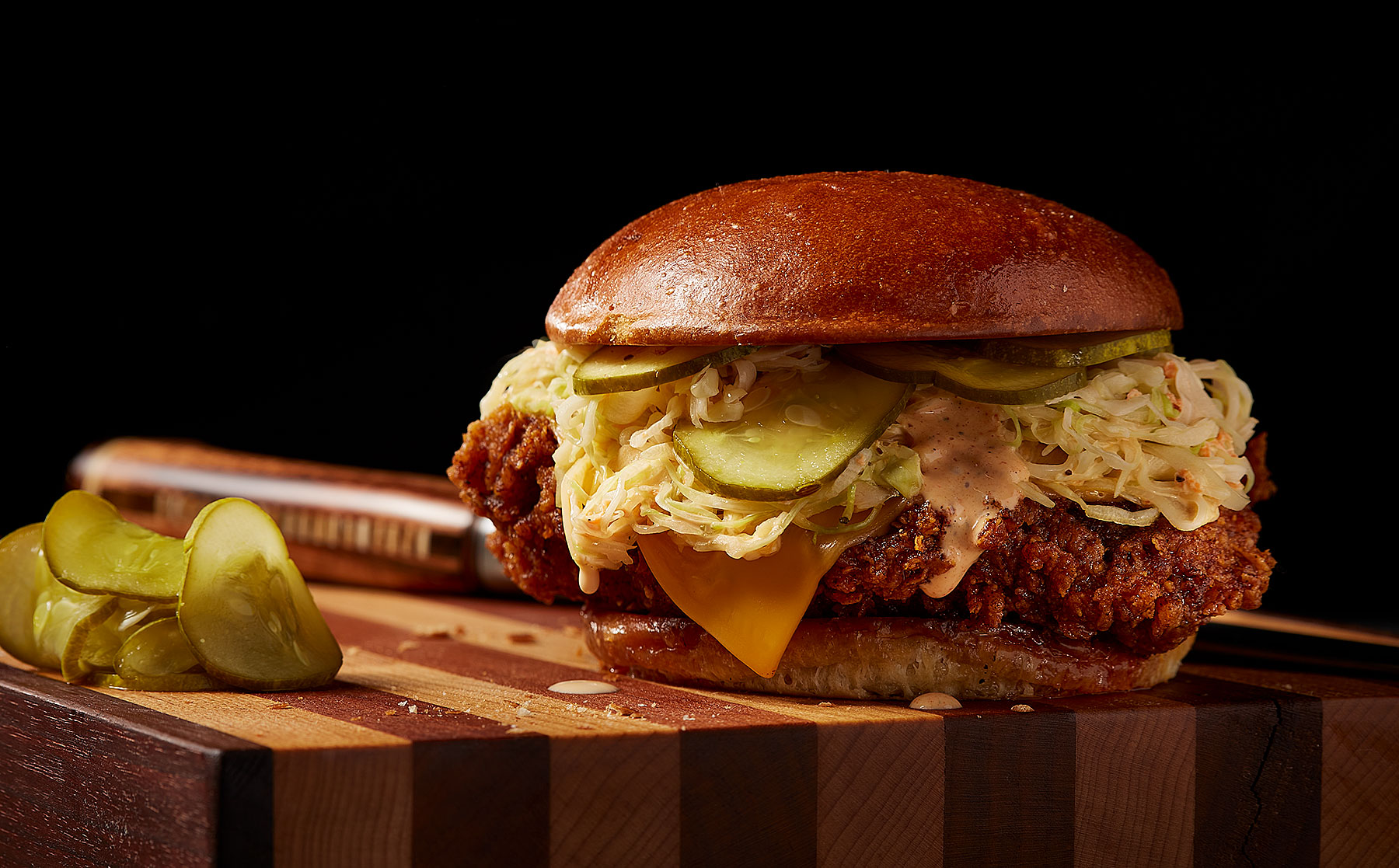 But at Prince’s, and at Cluck-It!, the hot chicken sandwich is more than just the fried fowl with chili heat, as Edwards describes: “We brine the chicken [sourced from Kentucky] for twenty-four hours in buttermilk [which contains an enzyme that breaks down the muscle fibers in the meat, and creates a juicy, tender bite]. Some people like to use tempura batter, or they dredge the chicken in flour. We use both tempura batter and a seasoned flour dredge, so that when you bite into the chicken, there’s an audible crunch. After battering and dredging, we dip each chicken piece in a mix of clarified butter and clarified chicken fat before adding the mild, hot or extra hot chili seasoning [for the extra hot, it’s a mix of habanero, guajillo and Trinidad Scorpion chilies]. We keep our fryers exceptionally clean, and I use a fryer that I can filter during service to get rid of all the flour that comes off, so that it doesn’t burn in the oil. My goal with all of this was to make insanely good food that we’d want to eat every day.” 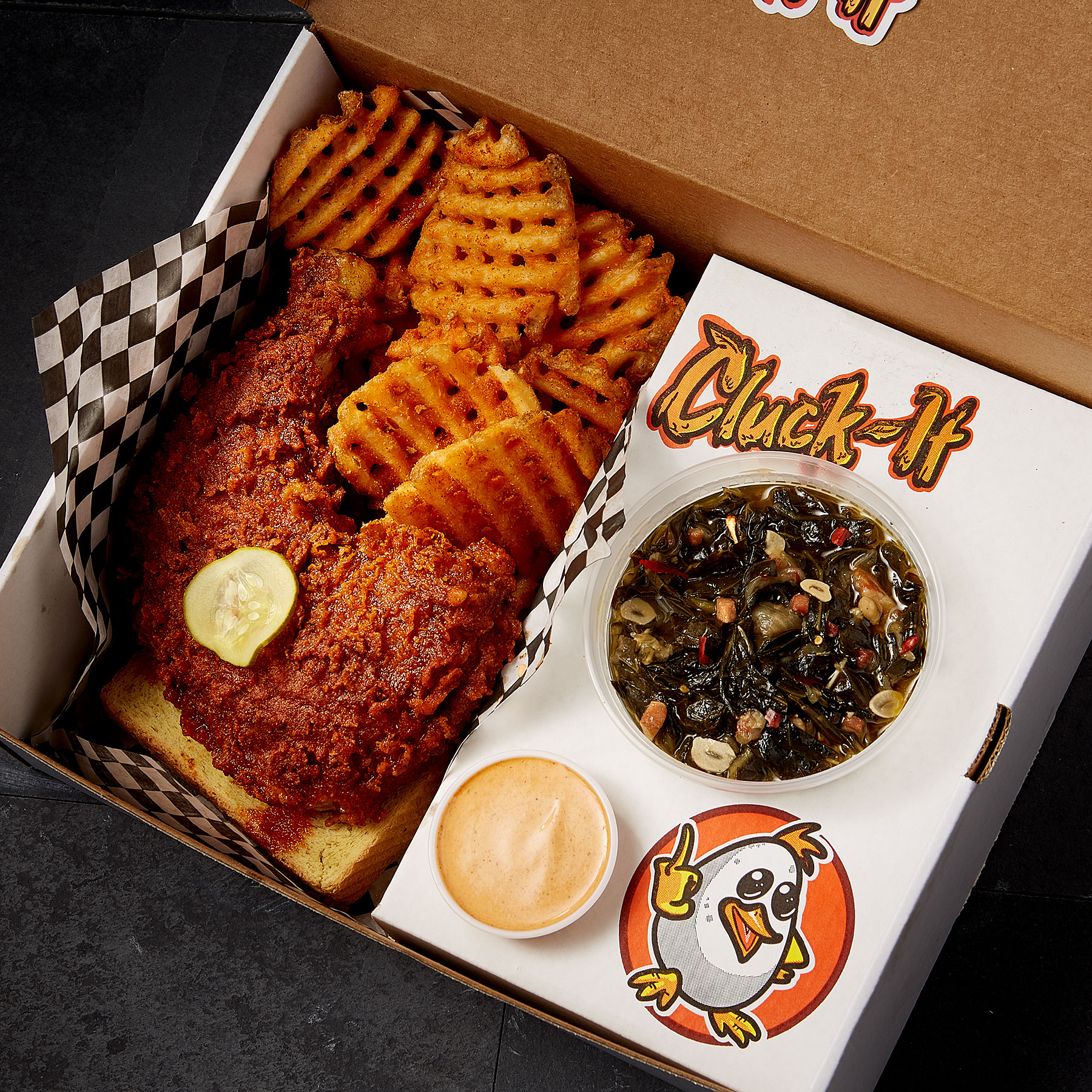 When talking about takeout and delivery food, packaging can be an afterthought: the chow is put into generic boxes, and out it goes to the customer. Perhaps it’s the fine dining backgrounds of Zubli and Edwards, or perhaps Edwards’ love of Japanese culture that compelled him to “put a ridiculous amount of time into figuring out how to package, because we want to give the customer a cool experience when they bring the food home.” Starters, sides and mains come in multiple boxes that fit neatly into one another, like the pleasant, functional compositions of food in a bento box. All of Cluck-It’s well-conceived packaging is branded with the cheeky logo of the chicken flipping the bird.

After you enjoy your Cluck-It! hot chicken sandwich, you’re going to want to order Zubli’s from-scratch banana pudding. We’ve all been served banana pudding made in industrial-sized quantities, and it’s usually okay but never amazing. Zubli’s version of banana pudding is jaw-droppingly delicious, due in part to rich veins of caramel layered between the clouds of Madagascar vanilla bean whipped cream. The sweetness is an excellent balance to the heat of the sandwich even if you’ve learned, as I have, to dial that heat down a little, the better to avoid even an imagined near-death experience.